The Tecno Camon i is one of the newest launches in the sub Rs. 10,000 smartphone segment. The Tecno brand is owned by Transsion Holdings which also sells phones under the Itel, Infinix and Spice names. These are all targeted at developing markets, and most of the models are budget-friendly.

Tecno says that the Camon lineup consists of camera-centric smartphones and this is currently its global flagship series, and today we're reviewing the first model of this series to be launched in India. Priced at Rs. 8,999, is the Tecno Camon i the best shooter on a budget? We find the answer

The Tecno Camon i is a budget smartphone with an 18:9 display, in line with the current trend. The 18:9 aspect ratio makes the phone narrower and slightly taller than usual. The phone has a plastic body with antenna lines running along the top and the bottom of the back, as well as rounded sides and edges that make it easy to hold.

At the front, it has a metallic grille which houses the earpiece alongside the selfie camera and flash. The power and volume buttons are on the right side of the smartphone, and while the power button is easy to reach, the volume buttons are placed a little too high for our comfort. The rear camera protrudes a little, causing the phone to rock when placed on a flat surface. Below the camera is a quad-LED flash. The smartphone also has a fingerprint scanner at the back which is easy to reach. While the plastic quality is good, the back picks up fingerprints quite easily.

The smartphone has a Micro-USB port at the bottom along with a microphone and a speaker grille. The 3.5mm headphone jack is positioned on the top. There's a 3050mAh battery inside, and Tecno ships a 6W charger in the box.

Tecno Camon i specifications and software

The Tecno Camon i sports a 5.65-inch IPS display with HD+ resolution. Tecno told Gadgets 360 that initial batches of the device shipped with Corning Gorilla Glass 3 but later batches use Nippon Electric Glass which is also supposed to be hard and scratch-resistant. There's no way to tell which lot our review unit came from. It also had a pre-applied plastic screen protector. Powering the Camon i is a MediaTek MT6737 which is a quad-core processor clocked at 1.3GHz. There is 3GB of RAM and 32GB of storage, plus a dedicated microSD card slot that allows for expansion of up to 128GB.

The Camon i is a dual-SIM device with two Nano SIM slots and supports 4G with VoLTE. It has Bluetooth, WiFi b/g/n, and GPS as well. This phone also has 13-megapixel cameras with an f/2.0 aperture at the front and at the back. There's a quad-LED flash at the back and a selfie flash on the front. 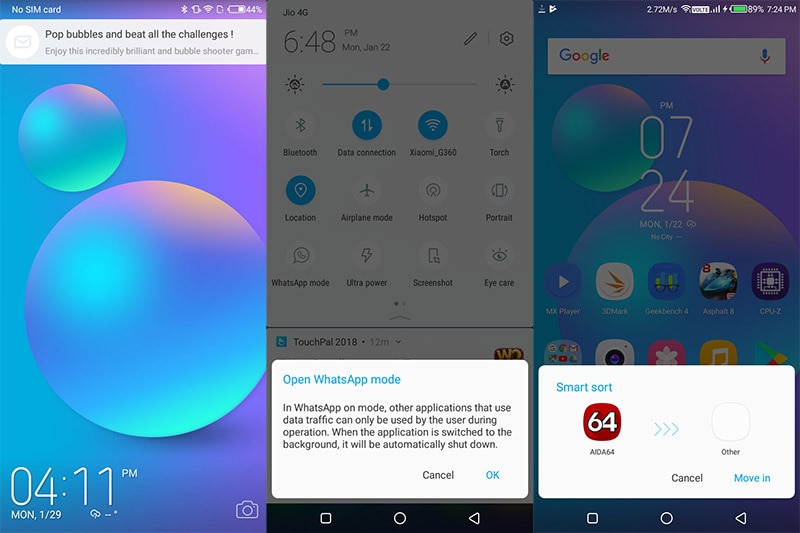 Software is where Tecno has taken a somewhat unique approach. This phone runs on Android Nougat with Tecno’s custom UI called HiOS on top. It is visually quite different from stock Android but it isn’t very hard to adapt to. The launcher has an app drawer and suggests adding new apps to specific folders after installation. HiOS also supports gestures, allowing you to do a three-finger swipe to take a screenshot or draw alphabets to launch specific apps when the screen is off.

The Tecno Camon i has a WhatsApp Mode toggle which lets only WhatsApp notifications through, while disabling background data for all other apps. In this mode, all other apps can only get online when they are active. This might be useful if you want to be frugal with your data usage but still receive WhatsApp messages. Tecno also offers a Full-Screen Mode toggle which lets you use apps in the traditional 16:9 aspect ratio if they aren't compatible with the 18:9 screen.

HiOS comes with a Theme app, a Service app, and a Phone Master app that lets you free up RAM and blacklist calls and messages from specific numbers. Other preinstalled apps include a Power Management app, the TouchPal keyboard, and the Phoenix Browser. We found the Phoenix Browser to be very spammy as it would cause ads to pop up on the lockscreen quite often. Sadly the app cannot be uninstalled but you can disable it. 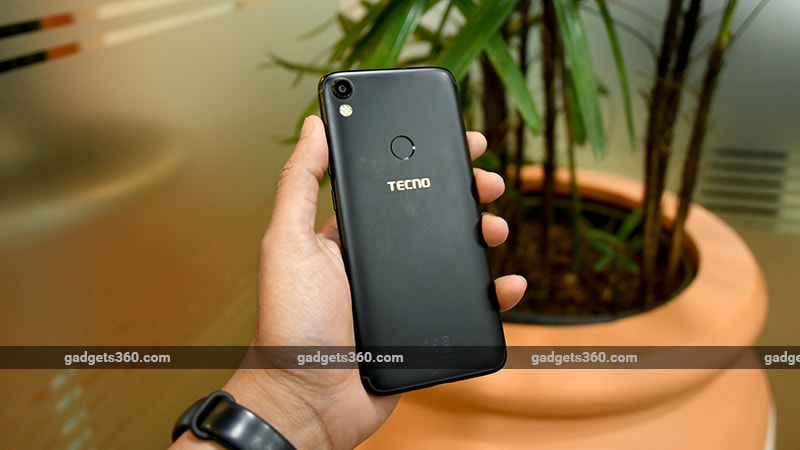 The Tecno Camon i has similar hardware to other smartphones in this price range. The MediaTek MT6737 is an entry-level processor. While we did not feel any lag in the UI, the phone does take a while to load heavier apps. We did see a slight lag when playing graphics-intensive games such as Shadow Fight 3, while basic games ran fine. The 18:9 display makes content immersive and has decent viewing angles. However, outdoor visibility isn't great.

We ran a couple of benchmarks to see how the Tecno Camon i fares against the competition. In AnTuTu, the phone scored 35,384, while in Geekbench 4, it could manage 584 in the single-core test and 1,666 in the multi-core test. 3DMark’s IceStorm Unlimited test resulted in a score of 6,016. Battery life is okay and the phone should last you one day with light use. Play a couple of games and you will need to plug it in to charge by night. The 3050mAh battery managed to clock 9 hours and 25 minutes in our HD video loop test. 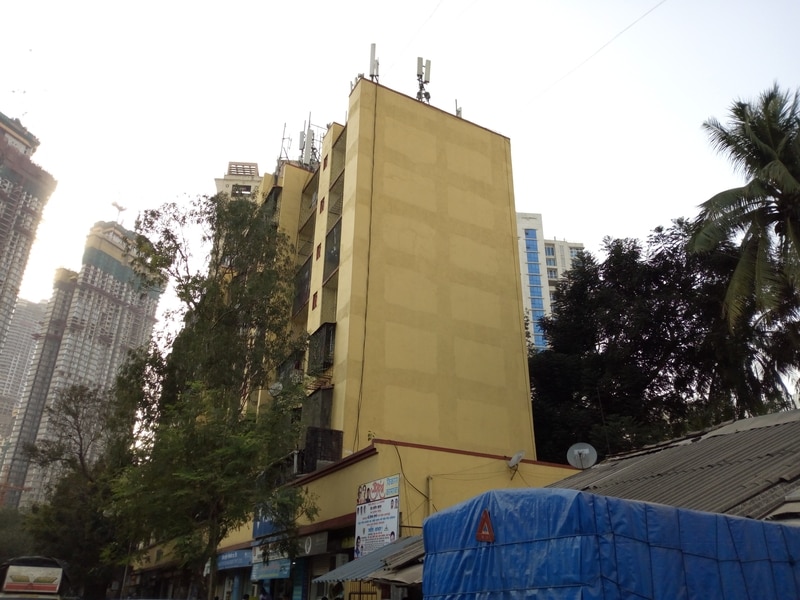 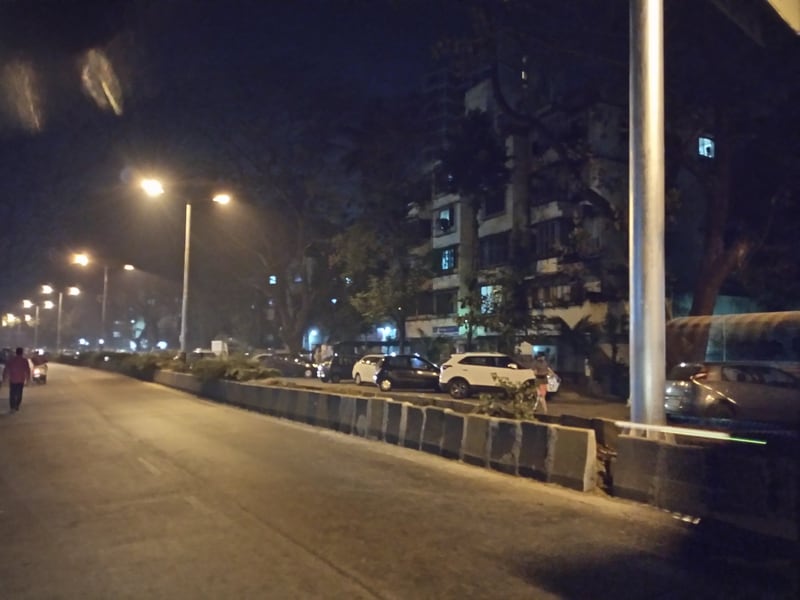 The Camon series is billed as a camera-centric smartphone lineup, so we were curious to see whether the Camon i could be a good budget shooter. The camera app is basic and has photo, video, beauty and panorama modes to choose from. Apart from that, it has a couple of filters, a quick toggle for HDR, and a Square photo toggle.

Photos taken with the Camon i are average but it did manage colour reproduction quite well. Outdoor shots taken during the day ended up being overexposed but the phone did manage macros quite well. Adjusting the exposure manually before taking shots did give us slightly better results. HDR mode is a little slow and any movement while shooting results in ghosting. When we did manage to get a steady shot with HDR enabled, the results were good.

Low light was where the Camon i struggled. The phone takes longer to focus and the slow shutter requires a steady hand. Photos taken in low light had relatively low noise but also lost out heavily in terms of detail. The front camera has a wide selfie mode that requires you to pan the phone horizontally as it takes three frames and stitches them together. Video recording maxes out at 720p for both cameras and there's no video stabilisation. Overall, camera performance is just average.

Verdict
The Camon i is a budget smartphone with an 18:9 display and claims to offer good cameras. The Smartron t.phone P (Review) offers better specifications but has a standard 16:9 screen. If the 18:9 display is what you are looking for, then you could also consider the more affordable InFocus Vision 3 (Review). However, if good camera performance is your main priority, the Moto G5 (Review) is still one the best options under Rs. 10,000.