Tecno, one of the many brands owned by Transsion Holdings, has launched its latest smartphone in India - the Tecno Camon i. This is the company's first smartphone in India to sport a display with the 18:9 aspect ratio. Positioned in the sub-Rs. 10,000 segment, it claims to offer a sleek design and decent specifications at an affordable price point. As for the price, Tecno Camon i has an MRP of Rs. 9,999 which puts it in direct competition with the likes of the Xiaomi Redmi Note 4, Micromax Evok Dual Note, and Moto E4 Plus. We spent some time with the new budget smartphone and here are our Tecno Camon i first impressions.

The most noticeable feature of the Tecno Camon i is its design. As soon as you take it out of its box, you can see that the antenna bands and rear camera module are reminiscent of the Apple iPhone 7. The Midnight Black colour variant sent to us looks quite similar to the 'Black' colour variant of the iPhone 7 and iPhone 7 Plus. The handset is 152.2mm tall, 71.7 wide, and 7.75mm thick.

The Tecno Camon i sports a 5.65-inch HD+ display with a resolution of 720x1440 pixels and an aspect ratio of 18:9. It's sharp enough, but it could have been brighter. Viewing angles are good and colour reproduction is average. Above the screen is the 13-megapixel front camera and an LED flash. In our brief initial tests, the front camera seemed good enough for a sub-Rs. 10,000 phone, but faces seem to be touched up somewhat like a beautification mode which can't be turned off. The camera app has a Wide Angle Selfie feature which lets you take panoramas with the front camera.

The rear of the phone bears a striking resemblance to the iPhone 7. There's a single 13-megapixel rear camera with a quad-LED flash. The camera performance seemed average, in the brief time we got to spend with this phone. It took decent shots under natural sunlight, but underperformed in low-light situations. This is expected from a smartphone in this price segment. Stay tuned for our full review.

The back of the handset also has a fingerprint sensor, with the Tecno logo placed right below it. The fingerprint sensor appeared to respond quickly to touches, and different fingers were distinguished accurately. 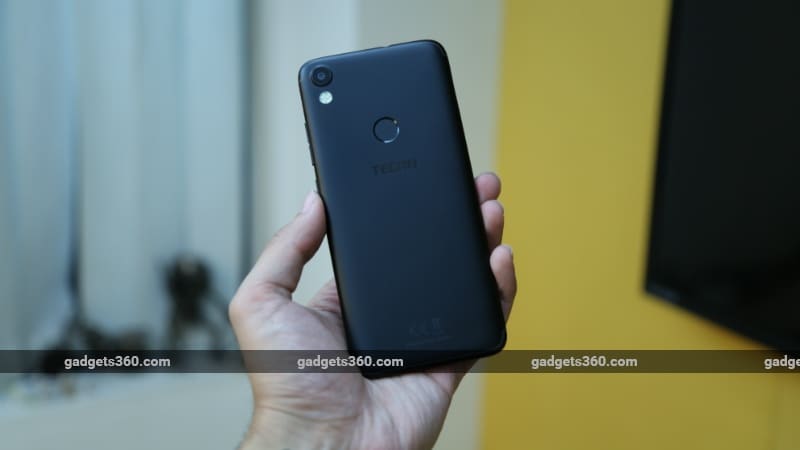 The Tecno Camon i features a volume rocker and the lock/ power button on its right. On the left is a slot that can house two Nano-SIMs and one microSD card. The bottom of the phone has a Micro-USB port and a microphone. On the top is a 3.5mm headphone jack.

At the core of the Tecno Camon i is an unnamed 1.3GHz quad-core processor. We will get to test out the performance of this SoC in our full review. The smartphone also has 3GB of RAM and 32GB of inbuilt storage which is expandable using a microSD card (up to 128GB).

Moving on to the software of the smartphone, the Tecno Camon i runs the custom HiOS 3.2.0 UI which is named like iOS but based on Android 7.0 Nougat. In the short time we spent with the device, we did not feel any significant lag. The UI even has icons that resemble the ones in iOS, and borrows features such as long-pressing to reveal shortcuts, similar to the 3D Touch on an iPhone. Our test unit came with Google's November 2017 security patch.

The preinstalled apps include Phoenix browser (with an inbuilt ad blocker), WhatsApp, Facebook, Instagram, Messenger, Hi Theme, Phone Master, Feedback, and Service. The phone also has some unique features - you can double-tap while the phone is locked to hear the time, weather, and alarm status read out. You can also cover the phone's display to mute all incoming calls. Additionally, you can slide down on the screen with three fingers to take a screenshot. 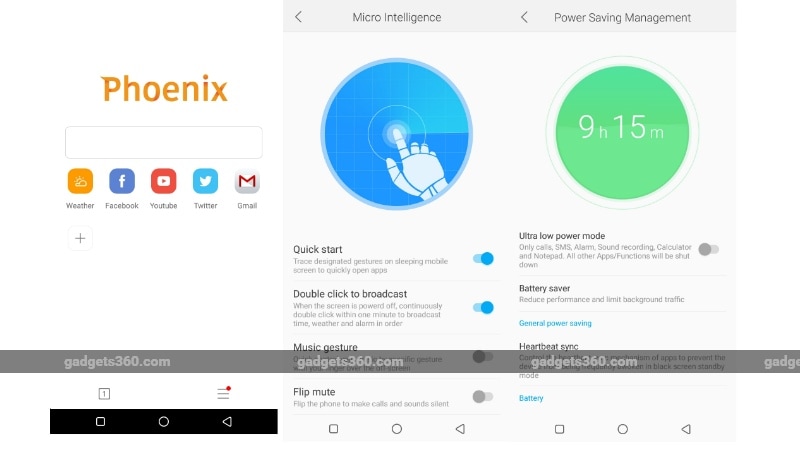 The Tecno Camon i sports a 3050mAh battery under the hood. With its Ultra Low Power mode, users can shut down all functionality except voice calling, SMSes, alarms, sound recording, the calculator app, and the notepad app. We will evaluate battery performance in our full review.

Stay tuned to Gadgets 360 to catch our full review of the Tecno Camon i in which we will test the phone's battery life, performance, cameras, and everything else.

product Tecno Camon i, priced in India at Rs. 9,999, was launched on Thursday. Here are our first impressions of the company's first smartphone with an 18:9 aspect ratio display.
Comments