Since the very first iPhone came out over eight years ago, Apple has adamantly refused to let users manage their own storage. Not only has there never been support for storage expansion, but you are restricted from browsing through the contents of your device so you can at least see what's going on. The idea is that users never have to be faced with pointless choices about what goes where, and security barriers are more important than interoperability.

Apple has not exactly been generous with storage, and most people buy base models with less space than they'd ideally like because of the high cost of stepping up. 16GB fills up very quickly when you take lots of photos and videos, or if you need lots of apps.

Strontium is one of a few companies launching external modules that plug into iOS devices' Lightning ports for a storage boost. While the Nitro iDrive USB 3.0 looks and feels like a standard pen drive - especially the dual-connector ones now available for use with Android devices - you can't simply plug it to give your Apple device a magical storage boost. We're going to examine how it works and whether it is the solution you've always wanted. 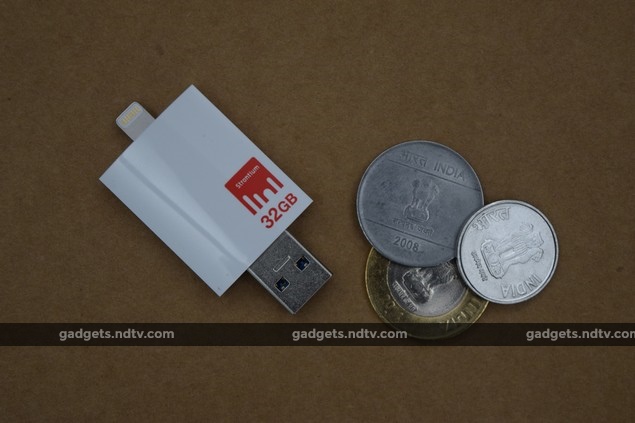 Look and feel
The Strontium Nitro iDrive USB 3.0 is a bit larger than the chunkiest pen drives available today. The front and back bulge outwards while the sides, top and bottom are flat. The two ends are capped with clear plastic removable lids, which seem like they'd be easy to lose track of. The edges and corners are extremely sharp - enough so that we scratched ourselves quite badly multiple times. The white plastic can also get slippery and so we weren't happy at all with the ergonomics.

There's a Strontium logo on the front with the capacity printed below it in a needlessly large point size. A status LED shines red through the plastic in one corner when the drive is plugged in to a PC and blue when plugged in to an iOS device. The rear is a little more interesting - apart from the usual regulatory logos, there's a line saying "Powered by PhotoFast" which tells us that Strontium's product is pretty much identical to the PhotoFast i-Flash Drive. PhotoFast has been developing such drives for Apple devices since at least 2011 - the first model featured a 30-pin connector for older devices. 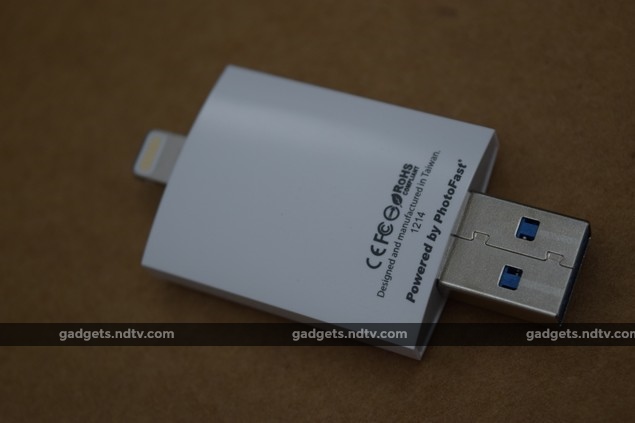 When plugged into an iPhone or iPad, the Nitro iDrive will stick out quite conspicuously. That and its sharp edges make it hard to imagine using an iPhone with the Nitro iDrive plugged in all the time. It's awkward to hold and use devices with this block sticking out of them, especially when on the move. You're much better off using it to swap files onto your iPhone or iPad rather than leaving it plugged in. In that sense, you can't really use it to permanently add more storage space to your phone.

You'll also need to take your iPhone or iPad out of any cover it might be in, unless enough space around the Lightning port is exposed to accommodate the Nitro iDrive. 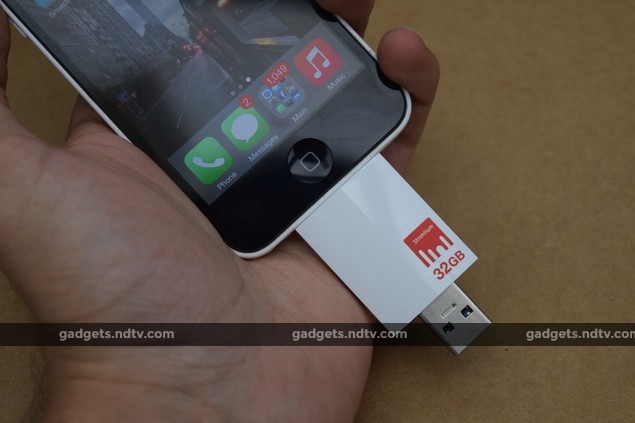 The app
Apple forces iOS apps to stay within their own pools of storage, and there's no way to make them recognise files stored anywhere else. You can't browse the contents of your iPhone or iPad to find documents and then decide how they should be opened. That means the only way to access anything on the Strontium Nitro iDrive is through its own app.

iOS accessories are allowed to prompt you to download an app (or launch it if you have it already), and that's what happens every time you plug the Nitro iDrive in. That saves you the trouble of searching through the App Store, which is good because the app in question is the one PhotoFast created for its own products. Searching for 'Strontium' won't bring up anything useful, which is not a surprise considering the iDrive itself is just a rebranded PhotoFast drive. 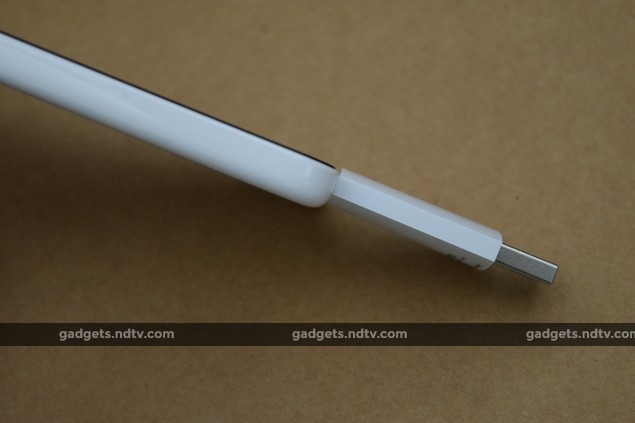 The app isn't particularly well designed and we needed a little while to get used to it. For starters, it threw up a barrage of permission prompts upon the first use: it wanted to send notifications and access our calendar, contacts and photos. Seeing no reason it should be allowed to do any of these things, we declined. It was only later that we discovered that the app has modules for backing up photos, contacts and calendars.

Icons and navigation cues are far from standard, leaving you guessing what to do quite often. A lot of the screen is wasted on a huge graphic showing how much free space there is on your phone. If you swipe to the left, you'll see the same graphic for free space on the Nitro iDrive (when it's plugged in) which is more useful to know. Below that, there are icons for the various modules - sixteen in all, with very little functional organisation. In addition to the self-explanatory Music, Photo, Video and Documents, there's Recorder, Dropbox and Search. There are also individual icons for backing up contacts, photos and calendars, as well as another Backup All icon. 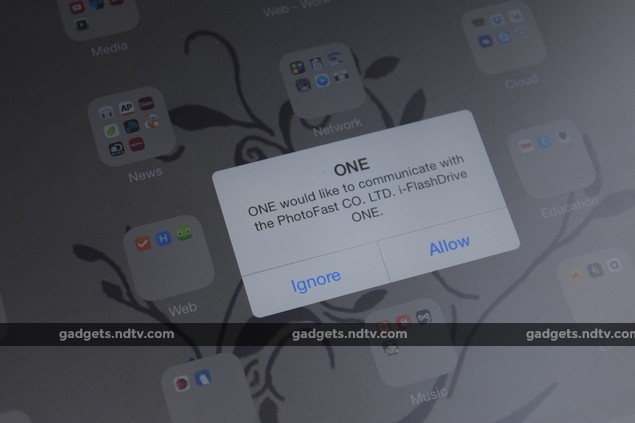 The app can handle playback of most audio and video formats, and also display PDFs, PowerPoint presentations and Word documents (though Excel files failed for us). Within each content silo in the app is a toggle that switches the view between files stored on your device and content on the Nitro iDrive. You can copy files onto your iOS device so that you don't have the Nitro iDrive sticking out all the time - though that pretty much defeats its purpose. Even so, all files remain within the app - you can't add songs to the iOS Music app, for example. Given this limitation, there are dozens of other media player apps which are far easier to use and far more capable.

The Personal Cloud module lets you connect to Google Drive, Facebook and Dropbox in order to access and copy data stored there - but there's also a Dropbox icon in the main list. Similarly, there are icons for In-App Storage and External Storage, showing you content in folders rather than sorted by media type. Buried within the Settings menu are options for data security and automatic synchronisation. 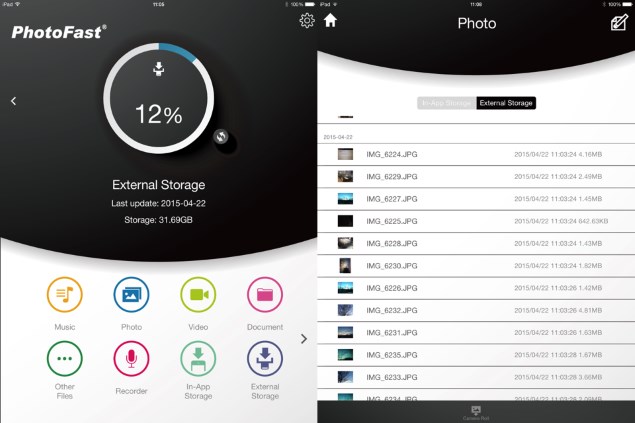 The only reason we would use this app rather than an alternative media players is that the Nitro iDrive hardware lets you easily copy all kinds of files from a PC to your iOS device and vice versa. Other apps can only be used to store files on-device but only through iTunes or a Web browser. Other than that, it is simply too awkward and inconsistent.

Performance
We tested the USB functionality of the Strontium Nitro iDrive with a desktop PC, and we also used it with an iPhone 5c, an iPhone 6, a fourth-generation iPad and an iPad Air 2. When plugged into the PC, it behaved just as any other USB storage device would. The Nitro iDrive needs to be formatted in FAT32 in order to be recognised by iOS.

Despite the support for USB 3.0, raw speeds were just about okay. We recorded 90.48Mbps and 84Mbps sequential and random read speeds respectively, while the same write speeds were 16.55Mbps and 7.1Mbps respectively. 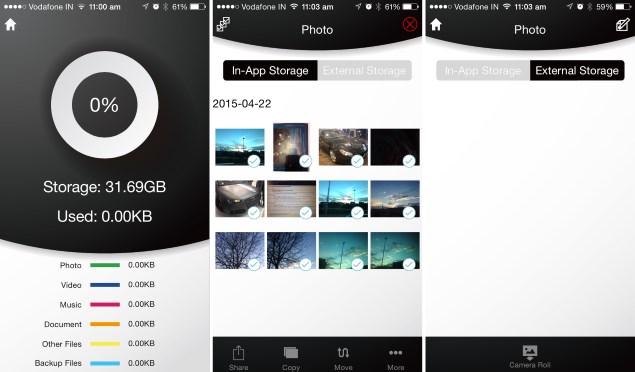 Trouble arose when we began using it with our iOS devices. For some reason, while all functions seemed to work perfectly on both iPads, the two iPhones couldn't recognise any content on it. They detected that the drive was plugged in, but reported it to be blank. The app allowed us to copy photos from the phones' camera rolls to the iDrive, create new files on it and even back up our information, but still couldn't recognise that content afterwards (though we could retrieve it normally through the iPads and PC). All test devices were running either iOS 8.2 or 8.3 and no amount of restarting and updating had any effect.

After corresponding with Strontium's technical staff for two days, the problem was identified. It turned out to have nothing to do with the type of iOS device used. A bug in the app affects how it recognises the time, which for some reason prevents files from being displayed. Devices set to display the time in 12-hour format will be affected, but those set to 24-hour can recognise the iDrive just fine. It seems ridiculous to us that such a bug should exist, but what's even worse is that the company had no clue about it even though the Nitro iDrive has been on sale for nearly three months. 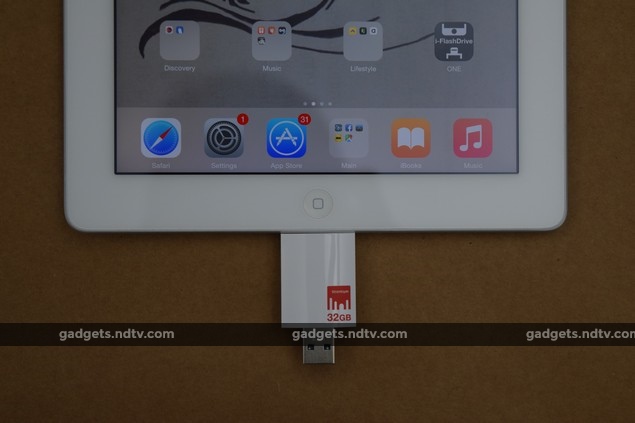 The version of the app we tested was 1.3.8, and Strontium told us that an update has been submitted to the App Store. However, as of the publishing date of this review, there is no indication whatsoever to customers that they might encounter a problem this severe, and no mention of the awkward temporary workaround or the impending fix.

There's no telling how many people have already bought a Nitro iDrive based on the features promised and have been unable to use it. It is therefore impossible for us to consider the Strontium Nitro iDrive a working product until the update is released. 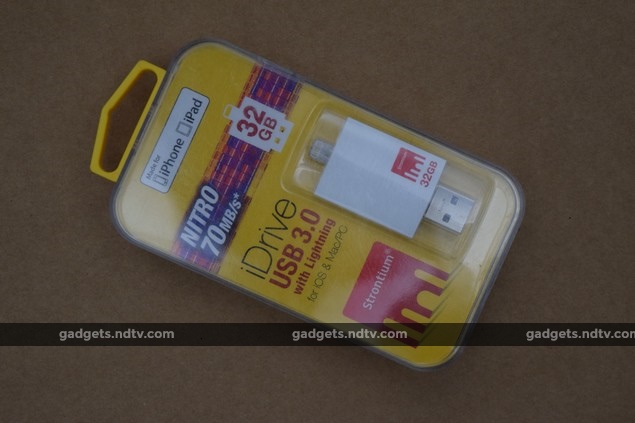 Verdict
The Strontium Nitro iDrive could work for you if you are willing to change your device's time display format. It's a good way to transfer files to and from your iPad or iPhone without the hassle of syncing through iTunes, and will come in handy for periodically backing up photos and personal information. However with no warning to buyers of the critical time format bug, we simply cannot recommend this product. There are alternatives in the market such as SanDisk's iXpand Flash Drive which we will test soon.

If you do choose to buy one anyway, the Strontium Nitro iDrive is available in capacities of 16GB, 32GB and 64GB at street prices of Rs. 4,200, 5,000 and 6,200 respectively. Given the relatively minor price differences between them, it makes almost no sense to get the smallest one. However, considering that you can't actually expand your iOS device's storage space, it would actually be a viable alternative to pick up a low-cost Android phone such as the Xiaomi Redmi 2 (Review | Pictures) as a secondary device for entertainment. MicroSD cards are cheap and easily available, and today's entry-level phones can handle all kinds of audio and video files.

product In theory, an external drive for iPhones and iPads sounds brilliant. In practice, however, there are some serious limitations to how and when it can be used. 2.5 out of 5 stars