Share on Facebook Tweet Snapchat Share Reddit Email Comment
In line with the recent trend of launching large screen phones, lovingly known as phablets, Spice launched the Spice Stellar Pinnacle Mi-530, earlier this year. The dual-SIM device (3G+3G) runs on Android 4.0 and is upgradable to Jelly Bean. The major differentiating features in the phone are its big 2,550mAh battery and a 5-megapixel front facing camera, which is a first among Indian brands. We try to find out if the Spice Stellar Pinnacle Mi-530 is one of the better budget segment phablets.

Build/Design
The Spice Stellar Pinnacle Mi-530 is a big phone, not just in terms of the screen size but also in terms of the phone's overall appearance, its dimensions and weight. It doesn't feel flimsy and the overall build exudes a feeling of sturdiness and durability.

The phone's front comprises mainly of its 5.3-inch screen which is covered by black tapered glass. The three capacitive touch buttons for navigation are located below the display and the marking is a little different compared to other phones that sport capacitive buttons. The chrome speaker grill that also houses a small notification LED, front camera and sensors are located above the screen. There's no Spice branding on the front. The screen is kind of beveled at the edges, making the surface smooth.

The outer shell and back cover of the phone are of bronze colour and not black. The smartphone has curved rounded corners. The volume rocker and a hardware key for the camera is located on the right side, while the power/screen lock key sits at the top. We found the placement of the power key a little odd owing to the big size of the phone. We feel that it would have been less cumbersome to use if it had been placed at the side. The micro-USB port and the 3.5mm headset jack are also placed at the top. There are no buttons or ports on the left or bottom sides of the phone. 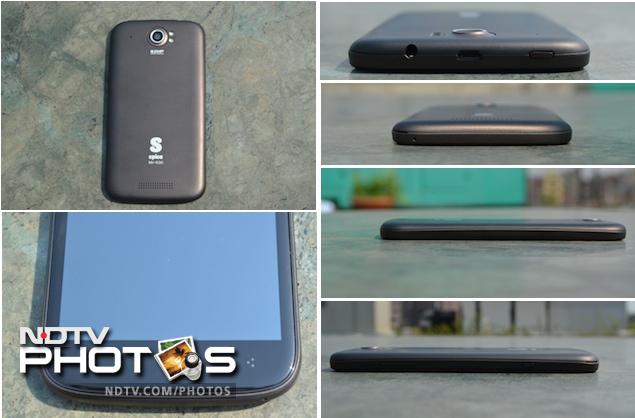 The back panel has a rubberised feel, which makes it comfortable to hold in the hands. The rear camera lens is located towards the upper part of the back, and protrudes out a little. There's a dual-LED flash just next to the lens and a noise cancellation microphone. There's some Spice branding towards the bottom and a speaker outlet.

Opening the back cover reveals the battery compartment with slots for 2 SIM cards and a microSD card located just above it. None are hot-swappable because of the placement of the slots.

Display
The Spice Stellar Pinnacle Mi 530 comes with a 5.3-inch qHD IPS screen that has a resolution of 540x960 pixels and pixel density of 206ppi, which is decent and graphics and text appear sharp. The viewing angles looked good, and the under-sun visibility on the phone was decent, and the screen is not very reflective. Videos and pictures looked good albeit a little less vivid compared to AMOLED displays but then again AMOLED displays offer saturated colours.

Camera
The 8-megapixel autofocus shooter takes good images in daylight we noticed that there's a very minor lag. Also, we observed that pictures taken in low-light conditions and indoors (without the use of the LED flash) were a bit grainy. The dual-led flash fulfills its intended purpose. The phone can record HD videos but we found that the quality of videos captured through the back camera was average. 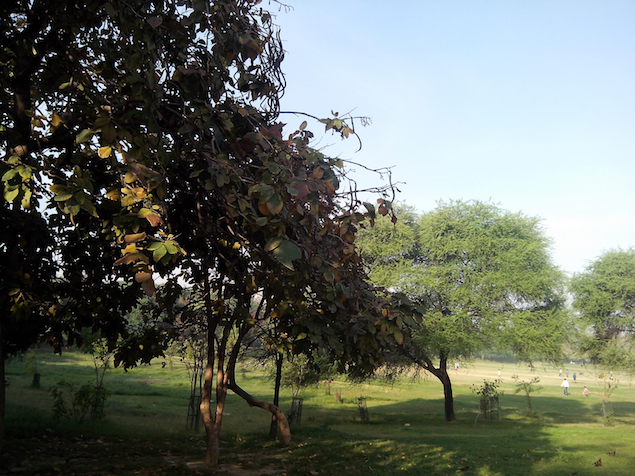 The camera app offers a multitude of settings and options including settings for exposure, sharpness, hue, saturation,brightness, contrast, ISO, and picture size among others. It offers different scene modes and colour effects, white balance modes, in addition to an HDR mode.The camera also offers a Panorama mode and a burst mode with the option to click 4,8 and 16 continuous shots.

What's worth pointing out is that the phone features a 5-megapixel front facing camera which also features auto-focus. The front camera takes above average shots and is great for video calls. Overall, we feel that the phone's pretty good for casual photography.

Update: Spice informed us that the Jelly Bean update is now available for the phone and customers can get their phones updated by visiting a Spice service centre.

Spice has not skinned the OS in a major manner barring some elements of the user interface, such as the background colour of the app launcher and the notification tray. The notification tray includes toggles for settings such as Wi-Fi, Brightness, Rotation, Bluetooth, GPS, Data and profiles (for alerts and other notifications). Similar to other ICS devices, there are five customisable home screens that can be filled with app shortcuts and widgets. There are five colour accent themes that change the look of the menu lists and some other elements. The phone also offers a Gesture screen lock allowing users to create and enable their own lock screen gestures. 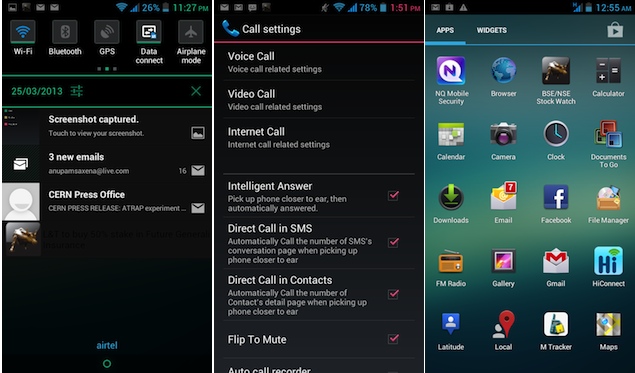 The handset sports three capacitive buttons - a Menu key, Home button and a Back key. Long pressing the Home key opens the app-switcher for switching between open/previously accessed apps. As we pointed out in our earlier reviews, we find the contextual menu button redundant. Perhaps, Spice could allow users to use the menu button exclusively as the app-switcher, on the lines of newer HTC phones.

Spice has also included some of its own apps including the NQ Mobile Security app, a BSE/NSE Stock watch app, Documents To Go documents editor, a File Manager, HiConnect for accessing phone data on the PC via Wi-Fi, M Tracker, Nimbuzz messenger, Spice Gang, Stringo, the Times Of India app, a Vault app and a download link for WhatsApp messenger. The handset also offers FM Radio.

In addition to standard features, the phone also features certain gestures similar to the Galaxy S III, that can be enabled via the Call Settings menu. These include Direct, which automatically dials a number on the screen when you pick up and bring the phone closer to the ear, Intelligent Answer that lets you pick up a call by bringing the phone close to the ear, flip to mute that mutes the phone if it is flipped when a call comes.

The phone's Video Player also features Pop-up Play that allows you to watch videos while performing other tasks. 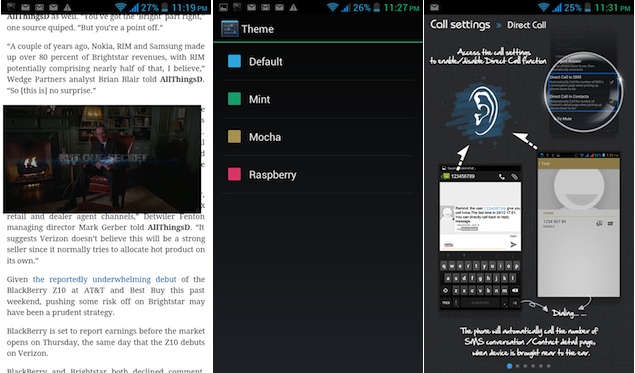 We found that all these features work as promised albeit not very smoothly.

The Spice Stellar Pinnacle Mi 530 also offers Boot Acceleration, that allows you to manage apps running in the background in order to make the phone boot up faster.

Performance
The Spice Stellar Pinnacle Mi 530 is powered by a 1.2GHz dual processor on a Mediatek chip with 1GB RAM onboard and a PowerVR SGX 531 graphics processor. There is 16GB of internal storage, which is expandable up to 32GB via a microSD card. Although we wish the phone had come with Android 4.1 Jelly Bean out of the box, it performed decently even on Ice Cream Sandwich. We did not experience any lag while launching apps, playing games, scrolling web pages or switching between apps.

Call quality was good, during our testing process.

The phone comes with a 2,550mAh battery, and based on our experience, it will last you a day and a half. Our usage medium to heavy, including 1-1.5 hours of phone calls, two e-mail accounts with push notifications, screen at maximum brightness, playing some music and video clips, Twitter notifications and WhatsApp chats. It's also worth pointing out that we had turned off Wi-Fi and auto-brightness, and the phone was hooked to a 3G network. Altering these settings might help in running the phone for a longer duration, depending on your usage pattern. We were impressed with the battery back-up delivered by the phone. The phone also offers a Power saving mode which can automatically save power when the battery is low turning off Wi-Fi, GPS, and dimming brightness of the screen.

Verdict
The Spice Stellar Pinnacle Mi 530 is a good large screen phone(phablet) in the budget segment. The phone offers a great battery backup and decent performance and its build quality is better than many other phones in this segment. However, the phone comes at a price point of Rs. 13,999, and there are other options including phones that are powered by quad-core processors, available in the market for the same price or lesser. Also, the phone's weight could be an issue for some users. 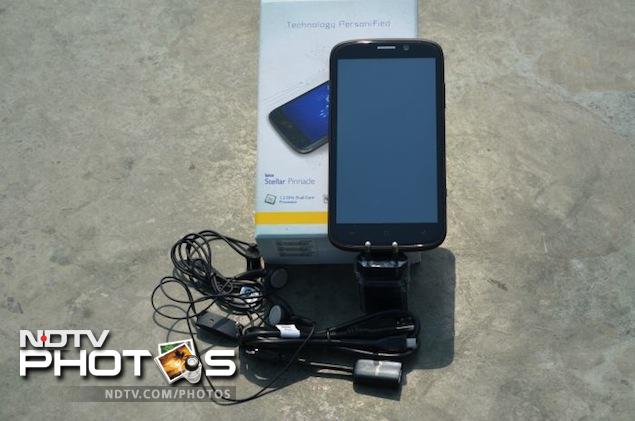 The Micromax A110 Canvas 2 is a great alternative. It costs Rs. 9,999 and sports similar specifications. It's also got a Jelly Bean update, recently. The Xolo A1000 is another good option that sports the same price tag.

The Micromax A116 Canvas HD costs a Rs. 1000 more but delivers great performance, though its build quality is a little inferior, and there were supply issues with it. The recently launched Xolo Q800 also runs on a quad-core chip and is priced competitively at Rs. 12,499. It has a smaller 4.5-inch screen though.

There's also the Karbonn S1 Titanium, which has a quad-core processor, and sports a 4.5-inch qHD (960x540) multi-touch capacitive touch display and runs Android 4.1 Jelly Bean. It has also been priced competitively at Rs 10,990. But we'd wait until we've had a chance to run that unit through our tests before recommending.

product We try to find out if the Spice Stellar Pinnacle Mi-530 is one of the better phablets in the budget segment.