Many Indian handset manufacturers have come out with interesting feature-packed handsets to challenge the dominance of global brands. One company that seems to be raising the bar is Spice Mobiles. Its latest phablet, the Spice Pinnacle FHD Mi-525 offers a crisp 5.0-inch full-HD display and comes packed with a quad-core processor.But is that enough to compete in a market that is presently dominated by brands like Micromax, Karbonn and Samsung? We try to find out in our review.

The front of the phone is dominated by the 5-inch full-HD display with three capacitive keys lined up below the screen for Settings, Home and Back. However, the backlight doesn't illuminate even when the display is on till one touches them, which we found a bit odd.

The back panel houses the camera along with the dual-LED flash and speaker grille located at the bottom left.There's some Spice branding on the back of the phone.

The phablet comes with dimensions of 149.4x74.9x9.3mm and weighs around 175 grams, which makes it a bit bulky. The phone comes only in a White colour variant.

There is a Micro-USB port at the bottom while the 3.5mm audio headphone port is located at the top of the device.The power key is located on the right side and the volume rocker key sits on the left side of the Spice Pinnacle FHD. As with most phablets, there is no dedicated camera.

The phone has a removable back cover and opening it reveals the battery compartment with two SIM card slots and a microSD card slot. The SIM cards and the microSD card are not hot-swappable because they are placed adjacent to the battery.

Overall, we found the Spice Pinnacle FHD to be a reasonably good looking device, although we wish it had been a bit lighter and sported a textured back. The glossy back panel of the Pinnacle FHD tends to slip out of hand.

The Spice Pinnacle FHD comes with a 5-inch full-HD display that has a resolution of 1080x1920 pixels and a pixel density of 480ppi, which is pretty good, and graphics and text appear sharp. The viewing angles were also good and under the sun visibility on the phone's screen was decent. The screen is not very reflective. Videos and pictures looked good as well. 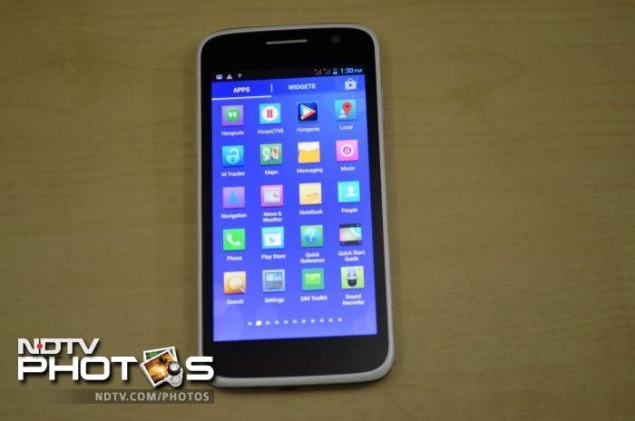 The screen renders text, images and icons sharply and the size makes it optimum for watching videos. We played some of our favourite videos on the Spice Pinnacle FHD and it didn't disappoint us, thanks to the full-HD screen.We also found the touch response of the screen to be good.

The 8-megapixel auto-focus camera takes good quality images in daylight. However, we noticed that pictures taken in low-light conditions did not come out well. Indoor images clicked with Pinnacle FHD with less light showed noise on the edges and were grainy.The colour reproduction was also not that great.

The dual-LED flash fulfills its intended purpose. The phone can record full-HD videos but we found that the quality of videos captured through the rear camera wasn't great. The 2-megapixel front-facing camera comes in handy for self-portrait shots while the quality is nothing to rave about. 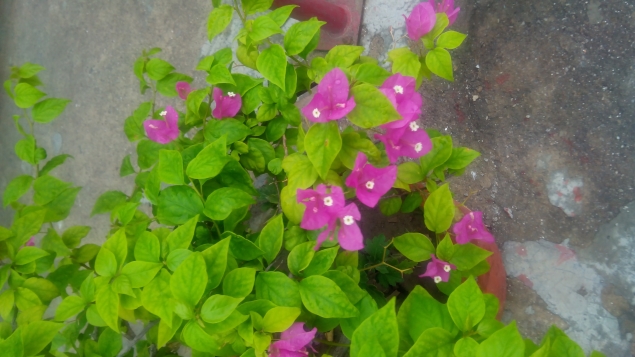 The camera is a bit of a disappointment, churning out mediocre results, even though it comes equipped with a number of shooting modes including Auto, HDR, Panorama, Portrait, Smile Shot, Landscape and face-detection. The camera also allows you to adjust sharpness, saturation, hue, ISO, and brightness settings.

Spice Pinnacle FHD Mi-525 runs Android 4.2.1Jelly Bean. Spice has skinned some UI elements of the operating system on the Pinnacle FHD and also offers a second theme that gives a different icon set. Even the default theme that offers stock icons features some minor tweaks with Spice choosing a square icon look instead of the plain one that comes with stock Android.

The notification tray includes toggles for settings such as Wi-Fi, screen brightness, auto-rotation, Bluetooth, GPS, data, screen timeouts and profiles (for alerts, other notifications and settings). The Phone, Contacts, Messaging and Web browser icons are placed on the home screen, which can be customized using widgets and shortcuts.

There are five customizable home screens on which you can park widgets and shortcuts and there are Google's basic apps in addition like Maps, Mail, Chrome, Current and YouTube. Users can always access the Google Play Store to download their favourite apps.

The Spice Pinnacle FHD also offers five colour accent themes that can change the look of the menu lists and some other elements. There is a Gesture screen lock feature in the device that allows users to create and enable their own lock screen gestures.

The device also features Google Now, an Android 4.1 and above feature that is a voice-based information assistant and an extension of Google search. It uses cards ,which are essentially small boxes that offer different sets of information like weather forecast, directions, traffic information, scores, appointments and currency conversion etc. 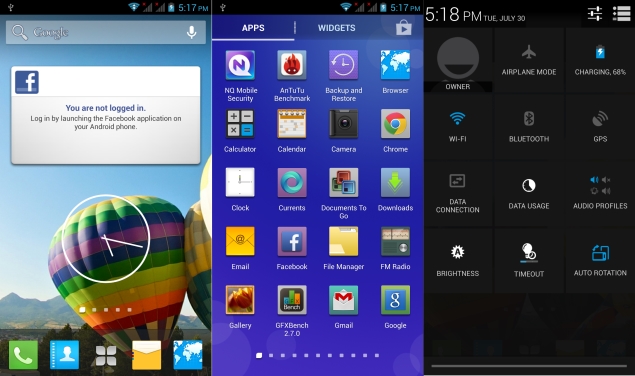 There is a plethora of pre-installed apps including Facebook, M Tracker, News and Weather, TOI, Twitter, YouTube and WhatsApp. Spice Cloud also comes preloaded on the device with a free usage period for a few initial months.Spice Cloud, a server cloud based mobile synchronization service, allows owners of Spice devices to automatically and wirelessly store and secure the data present in their phone and access the same data on multiple devices. It also offers anti-theft features such as remote wipe, remote locking and SIM change alerts, and helps in locating the device, if lost. In addition to these features, it also allows users to retrieve their call logs.

The Spice Pinnacle FHD is powered by a 1.5GHz Mediatek MT6589 quad-core processor.It has 1GB RAM on-board and PowerVR SGX 544MP GPU. There is 8GB of internal storage, which is expandable up to 32GB with the help of a microSD card.

The Android Jelly Bean OS works well, and the overall experience of navigating through the interface was impressive. We did not experience any lag while launching apps, playing games, scrolling web pages or switching between apps. However, one major issue that we faced while using the device was the backlight of the three capacitive keys going-off after a point of time.

The Pinnacle FHD has no issues running hardware intensive games and also handled full-HD videos smoothly. The phone natively supports popular formats like .AVI and .MOV. The device also features a Pop-up Play option that is quite helpful while multi-tasking. 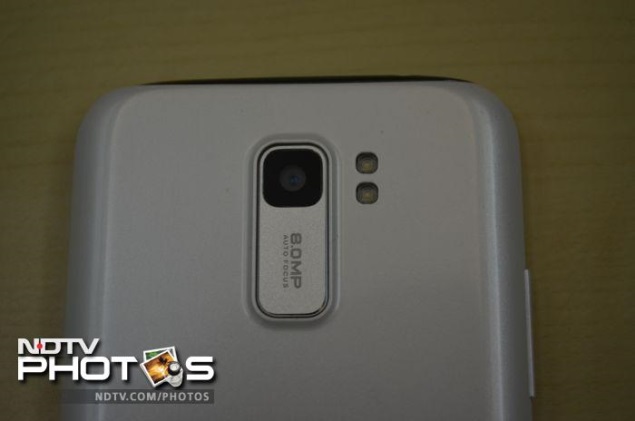 The speaker on the phone delivers decent quality sound at high volume levels, but there's some stifle when the phone lies on its back, as the speaker grill is located on the back. The headphones that come with the phone offer below average sound output. The phone also comes with SRS sound effects that enhanced our music experience on the device.The phone also supports FM Radio and the reception was good. It also offers Audio Profiles to quickly switch between different sound settings.

Call quality was good, during our testing process. The Pinnacle FHD also includes automatic call recording option, so users don't need any third-party apps.It is a dual-SIM smartphone with 3G support on both SIM cards, a feature that we miss on other devices in this segment.

The Spice Pinnacle FHD includes a 2100mAh battery and it lasted for a day with medium to heavy usage, which includes making calls that lasted for around an hour, an email account synced with push notifications, listening to some music and playing a few videos, web browsing and regular chit-chats using messages.The usage time also includes a bit of gaming, playing a relatively high-paced game like Dead Trigger. It's worth noting that we had turned off the Wi-Fi while using the device, brightness was at maximum level and we were hooked onto 3G. However, altering these can help in increasing the battery backup of the phone.

The Spice Pinnacle FHD is a solid offering that delivers a full-HD display and decent performance at a very competitive price. It is not without its quirks, and a better camera would have definitely helped its case.

At its current price, it actually faces competition from the likes of the Nokia Lumia 720 that is available at a price of around Rs.18,000. The Lumia 720 offers Windows Phone 8 OS, Nokia's famed build quality and the camera of the device is one of the best in its class.

Micromax's much-hyped Canvas 4 is also available in the same price segment and at a price of Rs. 17,999 but it doesn't offer a full-HD display.