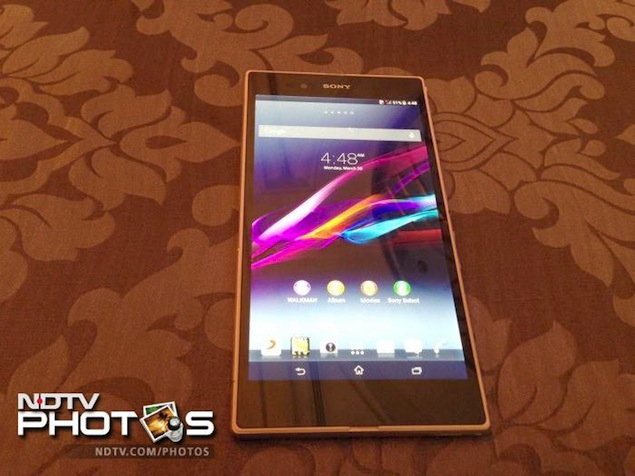 Smartphones are increasingly getting bigger, closing the gap with tablets. In fact, at a point where the smartphone screen crosses the 6-inch, it's difficult to call them smartphones. While not everyone likes to call them 'phablets', they clearly lie in hybrid territory, offering smartphone features in a near tablet form factor.

Sony has also recently forayed into this segment, with its new device, the Xperia Z Ultra, which boasts of a 6.4-inch display. It's certainly not the first device to sport a large screen; we've seen the Samsung Galaxy Mega 6.3 and the Huawei Ascend Mate featuring 6-inch+ displays, but we'd have to say that it's the sleekest out of all of them, at this point in time. The Xperia Z Ultra is super slim with a thickness of just 6.5mm.

We got a chance to play with the Xperia Z Ultra, and feel that it is one the sleekest devices, available. Although it weighs 212 grams, the overall weight to dimensions ratio is optimum and the phone doesn't feel very bulky. Having said that,  it doesn't easily fit the front pockets of your jeans, and you'd need to put it in a bag or hold it all the time. The Xperia Z Ultra follows the same design language that we've seen in the Xperia Z and looks more rectangular as the edges are just subtly rounded.

The front of the device is dominated by its 6.4-inch display. The Xperia Z Ultra's screen has a resolution of 1080x1920 pixels and is the first smartphone display that integrates Sony's Triluminos technology, which the company introduced at CES with its Bravia televisions. Sony claims that through the technology the display reproduces a greater range of rich, natural colours to deliver true, natural shades. It won't be wrong to say that the Xperia Z Ultra's screen is the most brightest and vivid display we've ever seen on a device of this size. Unlike the Sony Xperia Z, where we'd observed minor niggles with viewing angles, the Xperia Z Ultra's screen was flawless. Pictures and videos looked natural and colour reproduction was pretty accurate. The big screen and the full-HD resolution makes watching videos a joyful experience. Blacks had the perfect depth and the screen contrast was optimum.

Another interesting feature of the Xperia Z Ultra is its handwriting recognition functionality. The phone's screen is compatible with any pencil and selected stylus or pen with tip diameter over 1mm. We tried using a lead pencil to input text on the phone's screen with the Notes app and found that it recognised our writing with mixed accuracy. It offers word predictions even in the handwriting recognition mode, so this should not be a major problem.

The device's 2-megapixel front facing camera and the sensor array are located above the display. There are no hardware buttons on the front and the Xperia Z Ultra features software controls for navigation.

The front panel is surrounded by a thin frame which meets a thicker aluminium frame that separates the front and back panel.

The right side of the device features the same round metal button for the Power/ Screen lock functions that resembles the crown of a watch. Below this button, you'd find the Volume rocker key, made of plastic. Both these keys are easily accessible.

Since the Xperia Z Ultra is also dust and water proof and comes with IP55 and IP58 certification, the ports and slots are protected with plastic flaps. A flap that hides the microSD card and the micro-SIM card sits above the Power button at the right side. The 3.5mm headset jack is located just above this flap.

The left side of the device features a flap that protects the micro-USB port. You'll also find contacts for docking the device to a dock accessory, which is sold separately. The top and bottom edges feature small speaker outlets.

The back of the device is made of glass and sports a shiny, reflective finish. You'll see minimalist Sony and Xperia branding and the 8-megapixel rear camera lens at the back. The back is not removable. Unfortunately, the device doesn't offer an LED flash to shoot pictures in the dark.

Under the hood, the Sony Xperia Z Ultra features a 2.2GHz Qualcomm Snapdragon 800 processor with 2GB of RAM. It's the first device in the market featuring the Snapdragon 800 processor and in our short time with the device, the user experience delivered by the device was pretty snappy. The Xperia Z Ultra's interface which has been customised by Sony was responsive and smooth during our use. We also played the preloaded Asphalt 7 game and the gaming experience delivered by the phone was top notch.

We used the device's camera to shoot pictures with decent amount of light but found that there was some noise when one zooms in 100 percent.

Overall, the Xperia Z Ultra's USP is its big and bright screen, though we're not sure if everyone would be happy with its form factor, and the fact that it doesn't feature an LED flash with the camera. At an MRP of Rs. 46,990, no one would like compromises.

Watch out for our in-depth review of the Xperia Z Ultra.