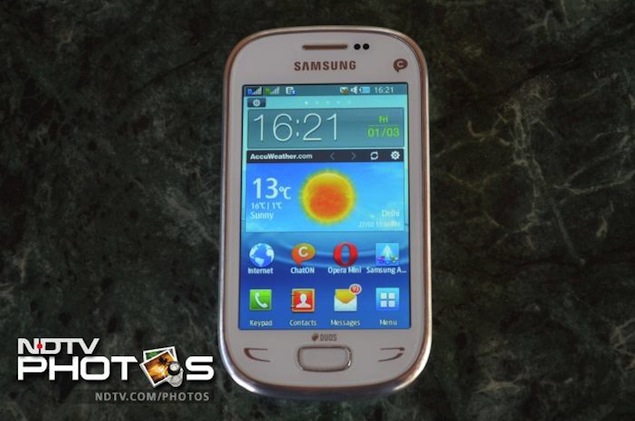 When Samsung unveiled the REX series, it also sparked a debate whether feature phones are still relevant at a time when Android-based smartphones are hitting the sub-Rs. 5,000 price point, and tech pundits, developers and OEMs want the smartphone penetration in the country to increase. Samsung likes to call these phones 'smart' feature phones as it's added a number of features and apps, though the phones don't run a smartphone operating system. So are these phones really smart? We try to find out in our review.

Build
The Samsung REX 90 is the top of the line phone in the REX series. The phone is based on the same design language as that of the Samsung Galaxy SIII, Galaxy Note 2, Galaxy S Duos and the recently launched Galaxy Grand. However, the phone is much thicker, even though it has a more compact form factor.

The REX 90 features the same white colour frame, with a chrome finish earpiece, and sensors above the 3.5-inch screen, on the front, along with the Samsung branding. It also sports a Home key (a hardware button), and capacitive keys for ending calls and answering (or accessing the call logs) calls. Unlike the Galaxy smartphones, the capacitive keys have silver markings. In a way it's helpful for people who're used to feature phones but we didn't find it aesthetically appealing. There's a chrome frame which separates the back from the front, but the finish is not that smooth if you compare it to the phones in the Galaxy series.

The back of the phone comprises of a removable plastic back cover, that has a glossy white finish. The camera lens and a speaker outlet is located towards the upper part of the back, with the Samsung branding just underneath them. 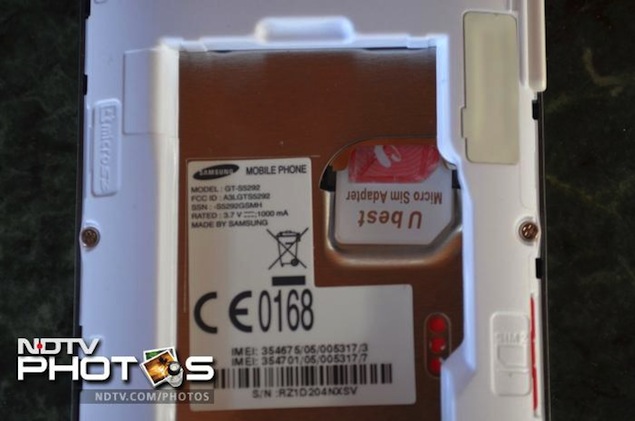 We didn't face any problems while trying to remove the back cover. The cover hides the battery compartment, a microSD card slot, and the slot for the secondary SIM card. The slot for the primary SIM card is located inside the battery compartment, which means that you'll need to remove the battery to access that slot. While the secondary SIM card and microSD cards are hot-swappable, we don't understand why Samsung chose to hide the slots for these, inside the cover. Overall, we were pretty satisfied with the build quality of the phone.

Display
The REX 90 has a 3.5-inch capacitive HVGA display with a resolution of 480x320 pixels and a colour depth of 262,000. For a feature phone, the display is decent and text was legible while images looked average. Under sun visibility was not that great and the screen is very reflective. The touch response was good.

Software/Interface
The REX 90 runs Samsung's proprietary operating system which supports Java apps. It's more like an evolution of the software found on the company's popular Corby or Star feature phone range. If you compare it to Samsung's homegrown Bada platform, you'd feel that it takes a few steps backward. Java apps don't support multitasking, so you can't run third party apps in the background.The overall visual language of the OS is based on Samsung's Touchwiz UI skin, which has also been deployed on its Android phones. 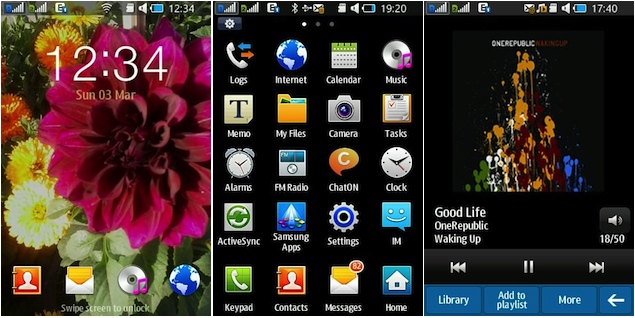 The phone features up to 7 home screens that can be populated with app shortcuts and widgets. The phone offers widgets for Twitter, Weather, Search and other utilities.
There's a notification tray as well with toggles for Wi-Fi, Bluetooth, Flight Mode, Sound settings and active SIM settings.

Samsung has added apps like Twitter, Facebook, Exchange sync, IM clients for Yahoo,Google Talk and Facebook Messenger,and some media apps, in addition to its ChatOn messaging app.  Samsung claims that the phone supports push mail for Google and Exchange but we were not able to configure our Exchange account or our Gmail account via the Exchange app, receiving sync failure errors each time we tried. The ChatOn app is also rendered useless as it doesn't run in the background, which means if someone sends you a message, you'll only be able to view it once you open the app, and of course you won't get a notification. The phone features regular productivity apps, a mobile prayer app and games including Brain Challenge and Wonder Zoo. Samsung is also offering some content services including My Movies, music and live TV services, which are web based services.

The messaging app supports threaded messages but it's difficult to see which thread has a new message as there's no marking to indicate that. Email is also integrated with the messaging app.

Samsung has also added an FM tuner and FM recording functionality. Interestingly, it's also possible to take screenshots by pressing the power and home buttons together.

A major annoyance with some third party Java apps is that they haven't been made for touch screen, so you need to use additional on-screen controls for navigating through them.
Overall, Samsung has tried to 'smart-ify' the phone with messaging and social apps, widgets, lock screen shortcuts and even a notification tray, but without multitasking (which is only available for the native music player or FM radio app) we can't call the phone a smartphone.

Camera
The phone features a 3.2-megapixel shooter does that not offer auto-focus, and there's no flash. The shooter takes above average images in daylight but images taken indoors under fluorescent light were a bit grainy. We also found that the camera had a minor lag. It also takes decent videos depending on the ambient light.

The camera app offers settings for Exposure value, size (ranging  from 0.3-megapixels to 3.2-megapixels), timer (ranging from 2 to 10 seconds), effects (grey, negative and sepia), white balance, night mode and a grid mode. The camera app also offers a shortcut to the image gallery.

Performance
The Samsung REX 90 is powered by a 312MHz processor, and though the phone doesn't require a powerful processor, we found a bit of lag while navigating around the user interface, as well as while browsing the web. There is 20MB of internal storage, which is expandable up to 32GB via a microSD card.

We were not able to play high resolution mp4 videos on the phone. Even high quality videos on YouTube did not play on the phone, and the low quality ones did not run smooth even on a high speed WiFi connection.

Lack of 3G means you would get low speeds while browsing the Internet, when you're not hooked on to a WiFi network. Samsung also offers Smart Dual SIM functionality on this phone allowing users to receive calls on the standby SIM as call waiting when the user is on a call through the primary SIM. The same can be configured through the phone's settings or through a prompt when you insert the secondary SIM card. We were not able to use this feature with 2 Airtel SIMs or even with 1 Airtel and 1 Reliance GSM SIM. Samsung does mention that the feature is network dependent. 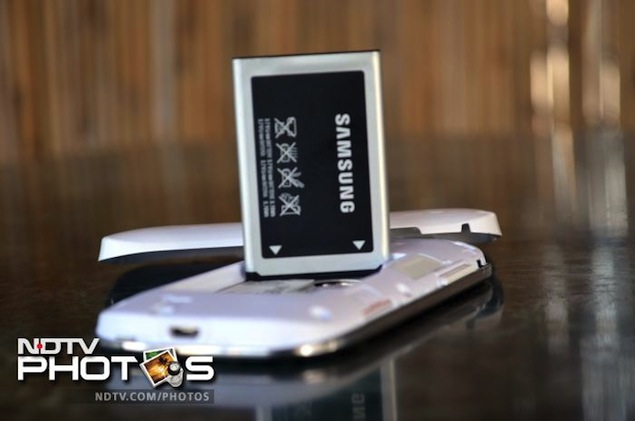 The phone comes with a 1,000mAh battery and, based on our experience, the phone will easily last you a day, even two, depending upon your usage pattern. Samsung promises a talk time of 15 hours.

Verdict
The REX 90 was announced at a price of Rs. 6,500 but is available for Rs. 5,590. It is a decent touch screen feature phone but we didn't find the experience of using it anywhere near 'smart'. So if you're looking for a budget phone that offers all basic apps complete with notifications and background play, we'd advise you to steer clear of this phone. The phone competes with Nokia's Asha feature phones which offer a better selection of apps, with IM apps like WhatsApp, even offering background notifications on the phones. The Nokia Asha 311 is a good alternative which offers support for both 3G and WiFi connectivity options, and is priced at Rs. 6,119. You could also look at budget Android phones from Micromax and Karbonn but we feel that budget Android phones don't really perform well.

Overall, we feel that the REX series is an attempt by Samsung to capture the feature phone market, but we're not sure if it would really find many takers for them.