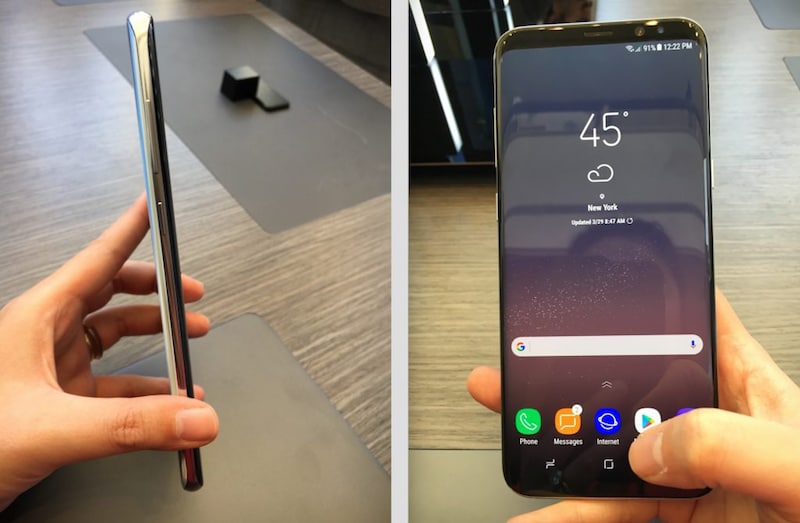 Samsung's new Galaxy S8 (and its bigger sibling, the Galaxy S8+) are designed to reintroduce the public to Samsung as the company tries to put the fiery death of the Galaxy Note 7 behind it.

And, as first impressions go, this is a doozy. If Samsung is trying to wow us into trusting it again, it's done a pretty good job with this highly-polished, distinctive pair of devices.

The obvious star of the show here is the screen, which takes up nearly all of the front of the new smartphones. Samsung has managed to maximize the screen here by concealing the physical home button underneath the screen, and using virtual buttons that can disappear when they're not in use.

The result is surprisingly impressive. Given that Samsung has had a similar edge-to-edge design on the Galaxy S7 Edge for a couple of years now, I wasn't expecting to be impressed by a little more room. But kicking out the home button does make a noticeable difference on the phone - giving you more screen on which to surf, work and watch videos.

The change does give both the Galaxy S8 and Galaxy S8+ a slightly weird screen size - they feel just a bit too tall for their width - that may be annoying to watch video on over time. The Galaxy S8 has a 5.8-inch screen, while the Galaxy S8+ has a 6.2-inch screen. Despite the odd shape, both models provide a lot of screen for a phone that I can use conveniently with one hand. That's not something I could say of the Galaxy Note 7, which had a 5.7-inch screen. I can't even really say that of the 5.5-inch iPhone 7 Plus.

I thought the virtual buttons might throw me off as well, given my experience with similar designs in the past. But Samsung seems to have done a good job in making sure the button is always accessible, at least from what I saw.

The phone is also very fast and feels powerful. I spent a little time with Samsung DeX, the desktop mode that lets you plug your phone into a monitor and special dock (sold separately for about $160), which was also impressive at first blush. Samsung's secured full support for Microsoft Office for the mode, which makes it feel about as capable as a netbook - one that also shows you your text, call and other notifications. You can pair a Bluetooth keyboard and mouse to the DeX dock, or opt to plug one in, so you can use all the same keyboard commands you're used to, as well as the option to drag and drop.

Samsung has included many of the features that made its phones great in the first place, including the option to expand the memory with your own SD card and waterproofing. It even improved the quality of the front-facing, a.k.a. selfie, camera. It's now 8-megapixel, up from 5-megapixel on the Galaxy S7, and will now auto-focus on faces.

Overall, I was pretty impressed with the look and capabilities of the Galaxy S8 and Galaxy S8+, and would tentatively say it's worth upgrading from an Galaxy S7. (And certainly from an Galaxy S6.) That said, there's so much about the phone that we still don't know. Yes, of course, there's the question of whether it will suffer the same battery problems as the Galaxy Note 7 - unlikely, given Samsung's new safety measures, but also not impossible.

It's worth remembering that the Galaxy Note 7 had rave reviews, too. Until the fires started.

Top 8 Features of the Samsung Galaxy S8 and Galaxy S8+

And there are also some things that Samsung has promised that I'll need to try for a while before I pass final judgment. For example, I didn't get any real sense of how effective Bixby, the company's new voice assistant, worked in conversation - demonstration halls are notoriously noisy. The features I did see, including its ability to search online for product just by snapping a picture of something, were still in tightly controlled demonstration mode.

That's a pretty important feature to try before coming to a decision on whether this is a phone I'd recommend over, say, Apple's iPhone. Because while the new screen design is nice - and it is, it should be said again, very pretty - a little bit of beauty is not what's going to tip people over the edge when looking to drop $700 or $800 on a phone.

If Samsung is trying to wow us into trusting it again, it's done a pretty good job with this highly-polished, distinctive pair of devices.