Samsung Galaxy On5 and Galaxy On7 First Impressions 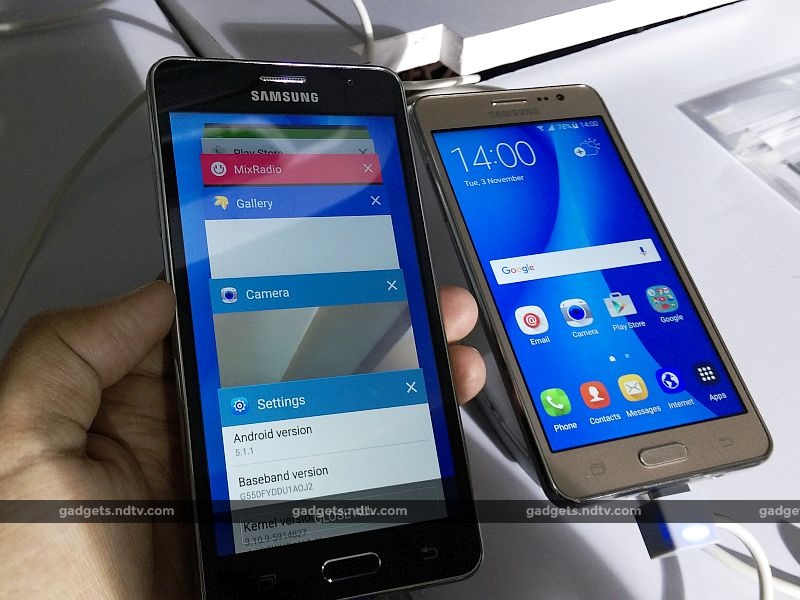 Samsung on Tuesday unveiled its latest Galaxy On series smartphones, the Galaxy On5 and On7, in India. The company is pushing these new models as value for money devices, and is targeting young consumers. Priced aggressively, the new On-series smartphones pack features including Ultra Data Saving (UDS) and MixRadio as well as 4G LTE support.

We spent some time with the new Samsung Galaxy On5 and Galaxy On7 smartphones at the launch event and here are our first impressions.

When we first looked at the new Galaxy On5 and Galaxy On7 smartphones, the dated Galaxy design was evident. Both models have identical front and back panels. Apart from the screen size, there is no visible difference between the Galaxy On5 and Galaxy On7. The biggest advantage however is the use of metal frames, which give the handsets a sturdy feel.

On both phones, the signature physical Home button is just below the screen, accompanied by capacitive buttons for Back and Recents. A Samsung logo is placed above the screen with the front camera and the sensors. The rear has a leather-styled finish, and here you'll find the primary camera, LED flash, and speaker grille. The volume rocker is on the left, while the power button is on the right. Of the two, the Galaxy On5 was easier to hold and use with just one hand. 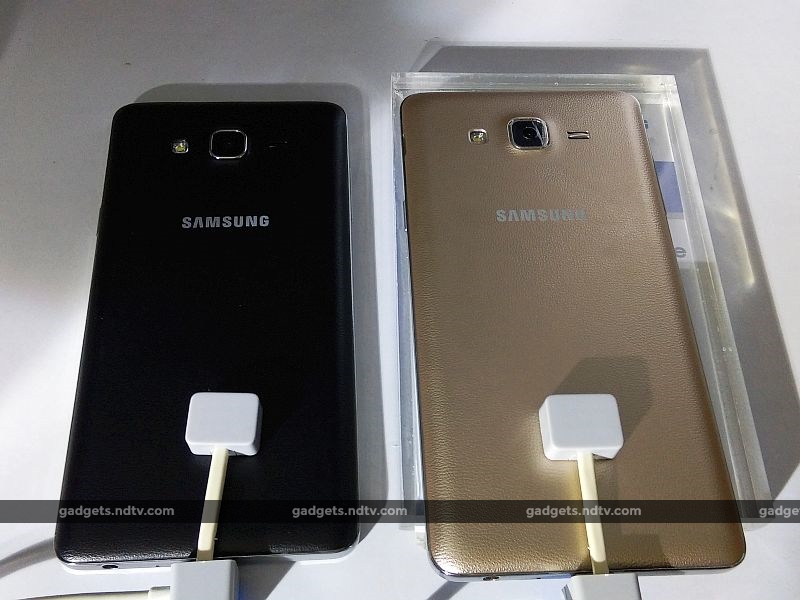 Looking at the specifications, the Galaxy On5 features a 5-inch HD (720x1280 pixel) TFT display and is powered by a 1.3GHz quad-core Exynos 3475 processor coupled with 1.5GB of RAM. It sports an 8-megapixel rear autofocus camera and a 5-megapixel front camera. It has 8GB of built-in storage that is expandable via microSD card (up to 128GB). Connectivity options on the Galaxy On5 include 4G LTE (with support for Indian LTE bands), Bluetooth, GPS, Glonass, Micro-USB, 3G, GPRS/EDGE, and Wi-Fi b/g/n. It has a 2600mAh battery, measures 142.3x72.1x8.5mm, and weighs 149 grams.

The Galaxy On7 features nearly identical specifications to the Galaxy On5, except for a larger display, different processor and larger battery, as well as a higher resolution rear camera sensor. It has a 5.5-inch HD (720x1280 pixel) TFT display and runs on a 1.2GHz quad-core Qualcomm Snapdragon 410 processor with 1.5GB of RAM. It sports a 13-megapixel rear autofocus camera and a 5-megapixel front camera. Similar to the Galaxy On5, the Galaxy On7 has 8GB of built-in storage that's expandable via microSD card (up to 128GB). It runs on a 3000mAh battery, measures 151.8x77.5x8.2mm, and weighs 172 grams. 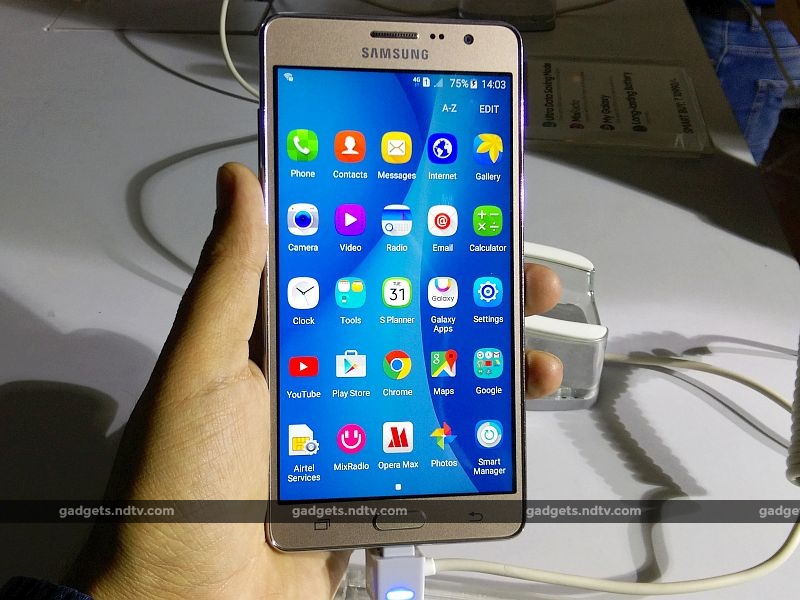 The displays on both Galaxy On-series models are not the usual Amoled panels and we could see the difference. The text and images produced on the Galaxy On5 and Galaxy On7 were sharp, but deep blacks were missing. The viewing angles on the both handsets were also average.

Running Android 5.1.1 Lollipop, both the Galaxy On5 and Galaxy On7 are skinned with Samsung's TouchWiz UI. While browsing through the menu and preloaded apps, one of the biggest takeaways was that there is a lot less of Samsung's bloatware then there has been before. The Galaxy On5 and Galaxy On7 have only a few preloaded apps; a trend which was started with the Samsung Galaxy S6. Notably, there are no Microsoft apps preloaded on these handsets, hinting that the companies' agreement to push the apps might only apply to high-end Galaxy phones. Both the On-series models featured a Google folder on the home screen housing all the Google apps.

On the software front, Samsung also advertises that the Ultra Data Saving (UDS) mode will help users save up to 40 percent on data usage when streaming videos, shopping online, or downloading files. The MixRadio app means that Samsung On5 and On7 users will get access to 30 million songs across different languages.

Coming to the camera, the app on both the Galaxy On5 and Galaxy On7 smartphones was quick and launched within a few seconds of touching its icon. The camera interface on the new On-series handsets is uncluttered. The option to choose modes, switch between the front and rear cameras, capture images or video, and jump to the gallery are all located on one side of the screen while the other shows general settings for camera. 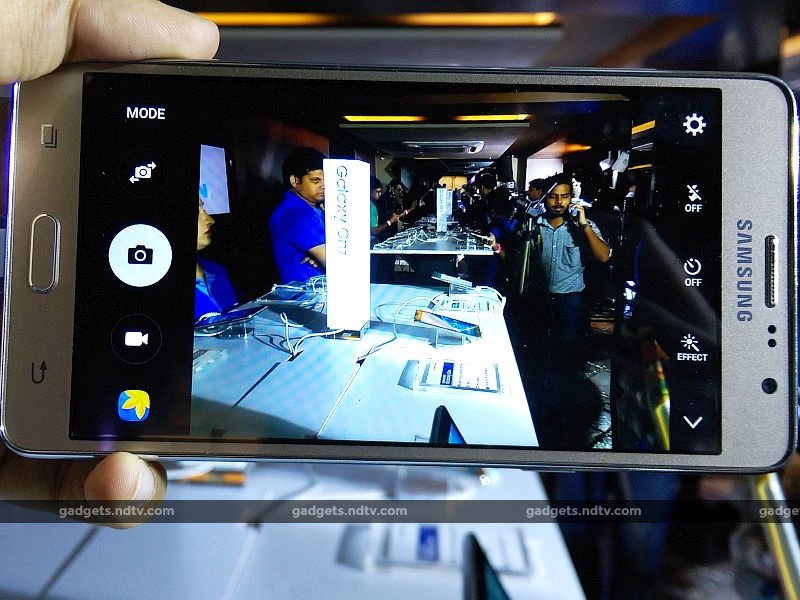 In our limited testing of the cameras, we found images taken with the Galaxy On7 in normal indoor lighting to be crisp, though the same couldn't be said for the On5. The front cameras on both devices seems have the same sensor as we got nearly identical results on both. Once again, we will really get a chance to test the camera under varied conditions only when we conduct a full review.

The Samsung Galaxy On5 has been priced at Rs. 8,990, while the Samsung Galaxy On7 will sell at Rs. 10,990. Considering that Samsung has launched the two models during the festive season, we can expect the company to promote and market them on a large scale.

Stay tuned to Gadgets 360 for full reviews of the Samsung Galaxy On5 and Galaxy On7 smartphones.