Not one, but two different models check in to the Galaxy Note family.

It's been nearly eight years since Samsung unveiled the first Galaxy Note. A phone with a 5.29-inch display might seem compact by today's standards, but the original Galaxy Note was ridiculed at the time as being uncomfortably — even unnecessarily — large and many also called its stylus as a relic from the past. The odds were stacked against the original Note but it's safe to say that at least in terms of size, Samsung was ahead of the curve. “Phablets” — as big screen smartphones like the Note were initially called — have become standard over the past few years.

The S Pen also continues to live, if not thrive, and last year Samsung doubled down on both factors that made the original Galaxy Note stand out by introducing the biggest Note device till date, and by adding Bluetooth as well as some new features to the S Pen. That evolution continues this year with not one, but two models — the Galaxy Note 10+ and Galaxy Note 10 — as well as Air Actions that aim to make the S Pen more useful to a wider audience.

Samsung says the introduction of two sizes is a first for the Note series, so it either wants us to forget about the Galaxy Note Edge that launched alongside the Galaxy Note 4, or it considers the physical differences between the two 2014 siblings to be insufficient to be classified as “different sizes”. Either way, the Galaxy Note 10 duo aim to please everyone.

The Galaxy Note 10 packs a 6.3-inch display in what's the most compact Galaxy Note device till date by volume. At just 168g, it's also the (joint) lightest, and in the brief time that we spent with Samsung's newest phones, we couldn't help but note how light and relatively compact it felt.

The bigger Galaxy Note 10+ doubles down on the “bigger is better” Note philosophy by offering a 6.8-inch display in a body that's only slightly taller and wider than that of last year's Galaxy Note 9. However, it's nearly 1mm thinner and 5g lighter than last year's model, which means it doesn't feel awkward to handle, though reaching all corners of the screen with one hand will obviously be a stretch.

Samsung has been able to squeeze bigger screens in without making these phones substantially bigger by reducing the bezels at the top and bottom, as compared to the Galaxy Note 9. Gone is the classical selfie camera setup, and you get a modern “hole-punch display” with the selfie camera in the middle. There's no visible fingerprint scanner at the front or back, as Samsung has opted for an ultrasonic in-display fingerprint sensor.

The edge-to-edge displays on these two phones really lend themselves well to watching videos and consuming other types of media. The Dynamic AMOLED panels with HDR10+ support seem less saturated than some of the panels we've seen on other Samsung devices, and those who prefer accurate colours over eye-popping contrast should be happier as a result.

One thing that did irk us during the time that we spent with the devices is Samsung's decision to move the power button to the left side, where the Bixby button — now gone — used to be. Most smartphones — including Samsung's own phones — have the power button on the right side, so this is something that will take some getting used to. 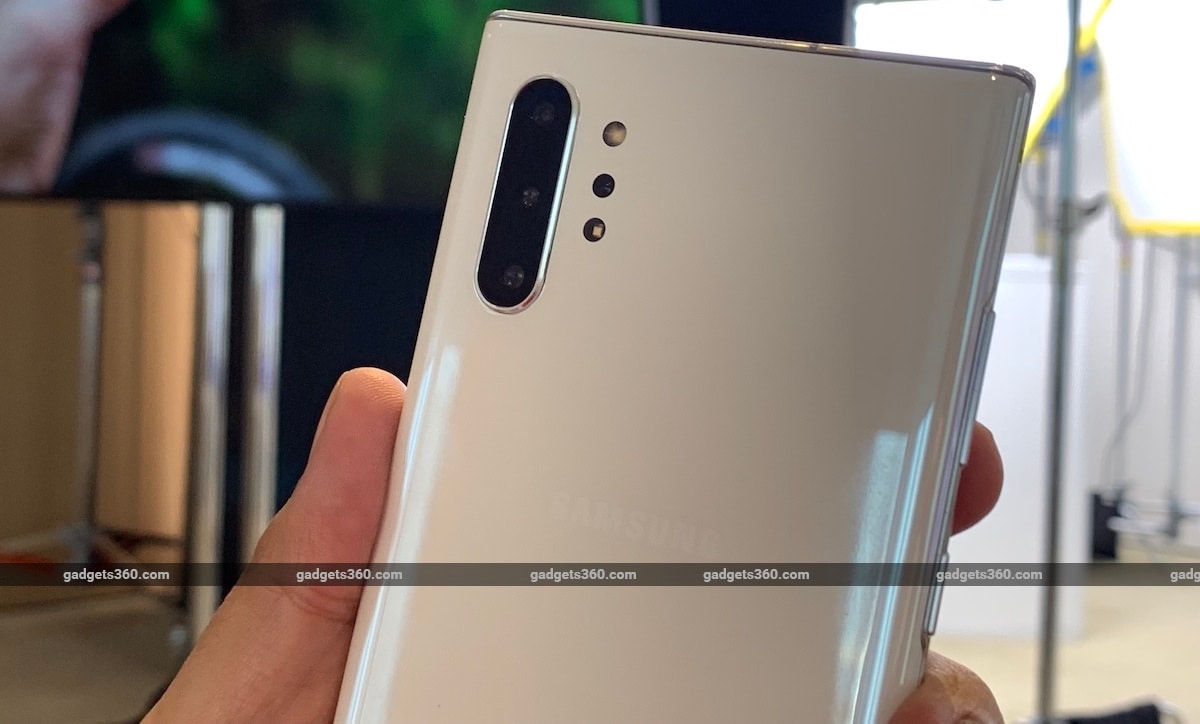 Talking about changes, after years of some very vocal support for the headphone jack, Samsung is the latest to say goodbye to it. That's sure to bother those still hanging on to their traditional earphones, but with improvements in wireless audio standards, the move is both unsurprising and a non-event for most consumers.

In terms of specifications, the Galaxy Note 10 duo pack everything that you'd expect from 2019 flagships, and more. In the Galaxy Note 10+, the top-of-the-line SoC is backed by 12GB of RAM with a choice of either 256GB or 512GB internal storage. You also get the option to add up to 1TB of additional storage using a microSD card.

The microSD card slot is curiously missing from the Galaxy Note 10, and you get “only” 8GB of RAM in the sole configuration, which has 256GB of storage.

The Galaxy Note 10 has a triple rear camera setup at the back — a 12-megapixel f/2.1 sensor paired with a telephoto lens; a wide-angle lens with a f/1.4-f/2.4 12-megapixel sensor; and a 16-megapixel f/2.2 ultra-wide camera. The larger Galaxy Note 10+ has the same three cameras but also packs an additional VGA “DepthVision” camera designed to let you take 3D scans of objects. Both phones feature identical front cameras with a 10-megapixel f/2.2 sensor. 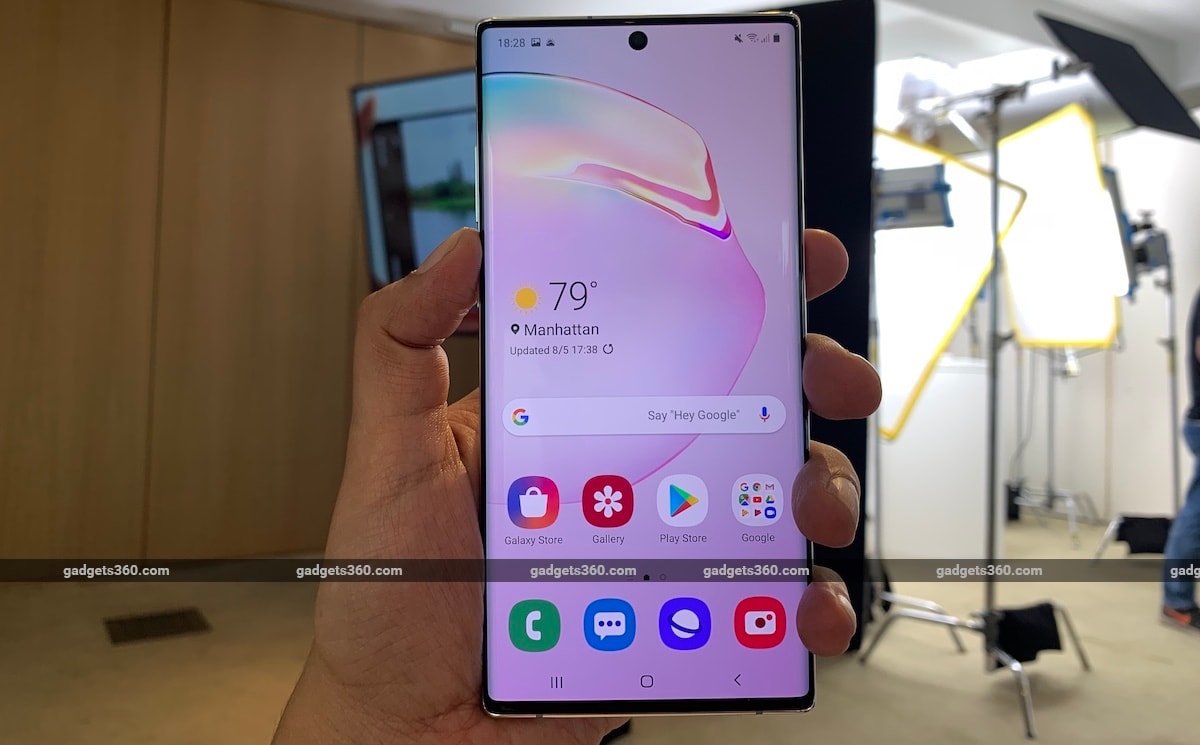 Samsung is promising a lot of camera improvements, with features such as Zoom-in Mic, which lets you enhance the audio of specific subjects in a video with a simple tap. We look forward to testing this and other new features out as part of our review process, and will reserve judgement on them until that time.

Finally, as we mentioned earlier, Samsung is touting new features in the S Pen. Air Actions let you trigger actions within select apps by performing gestures while holding the button on the S Pen down. For example, in the Camera app, swiping up or down with your hand will switch cameras, while a clockwise circular motion will let you zoom in on an object.

Whether Air Actions can go from being a cool party trick to being genuinely useful in the long term might well come down to third-party developers. Samsung has announced an SDK that will let developers integrate Air Actions within their own apps.

One feature that's definitely useful is the improved conversion of handwritten notes to text that can easily be exported to a wide variety of apps.

Disclosure: Samsung sponsored the correspondent's flights and hotel for the Note 10 launch event in New York.