Is the Galaxy M21 an upgrade over its predecessor?

Samsung's Galaxy M series was introduced as an online-exclusive lineup to compete with Chinese manufacturers such as Xiaomi and Realme. The devices introduced as a part of this series have gained a lot of popularity thanks to their aggressive pricing compared to Samsung's other offerings. Thanks to their popularity, these smartphones are now also available offline. Samsung recently added another model to this series, called the Galaxy M21. This new smartphone shares a lot of hardware with some of its predecessors but can it stand out? We put the Galaxy M21 to the test to find out.

Samsung has been making phones in the Galaxy M series out of plastic to keep costs down. The Galaxy M21 feels like it was designed with a tight budget in mind. The back panel is made out of plastic and has a glossy finish. It picks up fingerprints very easily. Samsung does not provide a case in the box, so you'll have to wipe the device often till you buy one yourself.

The Galaxy M21 is the successor of the Galaxy M20 (Review) but looks much more like the Galaxy M30s (Review) which was launched in mid-2019. However, it does not come in the same flashy colours and is available only in Blue and Black.

The Galaxy M21 has a big display that measures 6.4 inches, and has thin bezels at the top and the sides. The chin is considerably thicker. At the top, it has a waterdrop notch that houses the selfie camera and a tiny earpiece right above it. You can reach the top of the display if you have big hands, else you'll need to shuffle a little to reach the top. However, this phone isn't as big as the Redmi Note 9 Pro Max, which we recently reviewed. 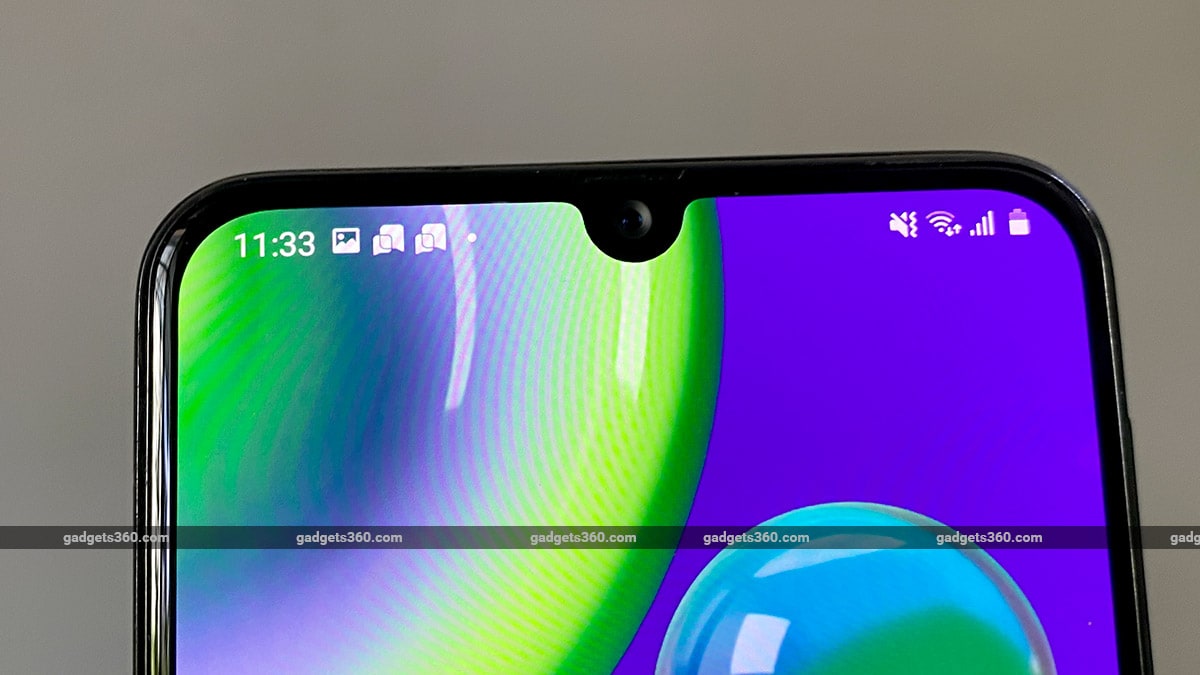 We also had an issue reaching the volume buttons as they are positioned a bit too high for our liking. The power button and the rear-mounted fingerprint scanner are well placed though, and are easy to reach when using the device single-handed. The Galaxy M21 measures 8.9mm in thickness which is mainly down to the big battery that it packs in. Surprisingly, the device does not feel too bulky in the hand as the sides are curved. It also tips the scale at 188g, which is much lighter than the Redmi Note 9 Pro (Review) which felt bulky.

Samsung offers a USB Type-C port at the bottom and a 15W charger in the box. The Galaxy M21 also has a 3.5mm headphone jack at the bottom along with the loudspeaker and the primary microphone.

The Galaxy M21 has a 6.4-inch AMOLED display with full-HD+ resolution. An AMOLED panel in this price range isn't very common but Samsung has been steadily changing that with the Galaxy M series. This panel is vivid and has very good viewing angles. It also gets bright enough outdoors to be visible under sunlight. 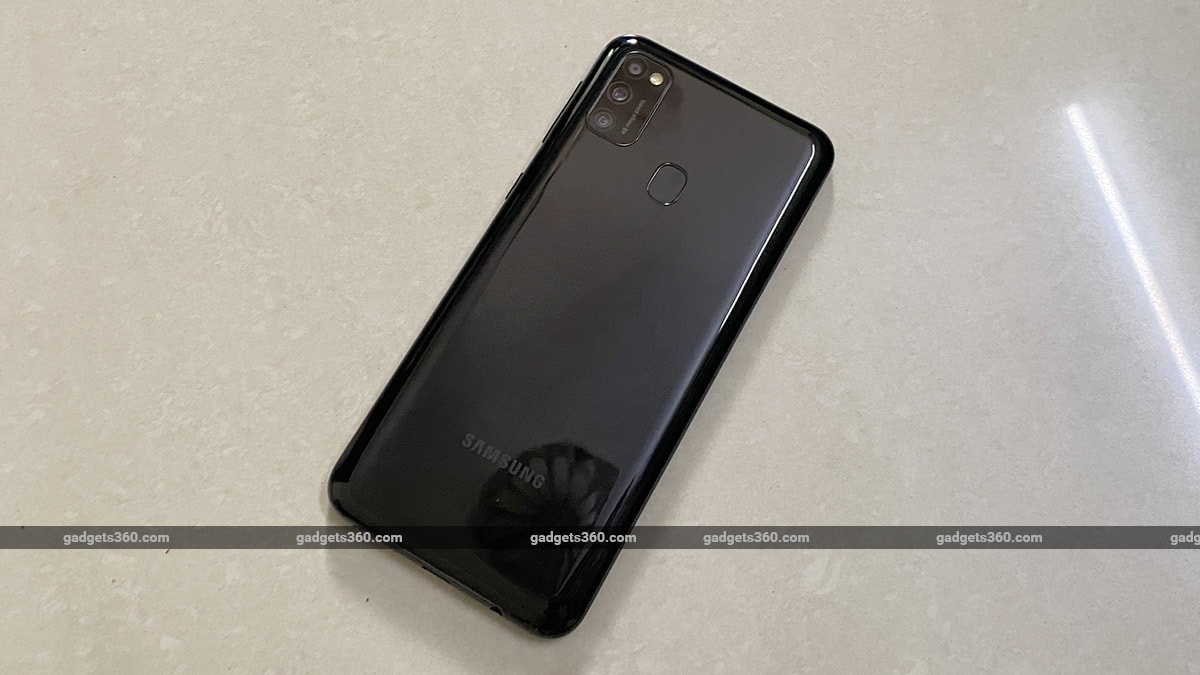 The Galaxy M21 is a dual-SIM device and has two Nano-SIM slots. It also has a dedicated microSD card slot for storage expansion. There is support for dual 4G VoLTE, Bluetooth 5, dual-band Wi-Fi, and four satellite navigation systems. It packs in a 6,000mAh battery.

The Galaxy M21 runs One UI 2.0 on top of Android 10 which is the latest version of Android. It was still running the February security patch, which is now dated, at the time of this review. The UI is similar to that of the Galaxy M31 which we reviewed earlier this year. With the Galaxy M21, you will need to be careful while setting up the device, or Samsung will send you marketing notifications. The setup process also suggests installing a few other apps, which we skipped. 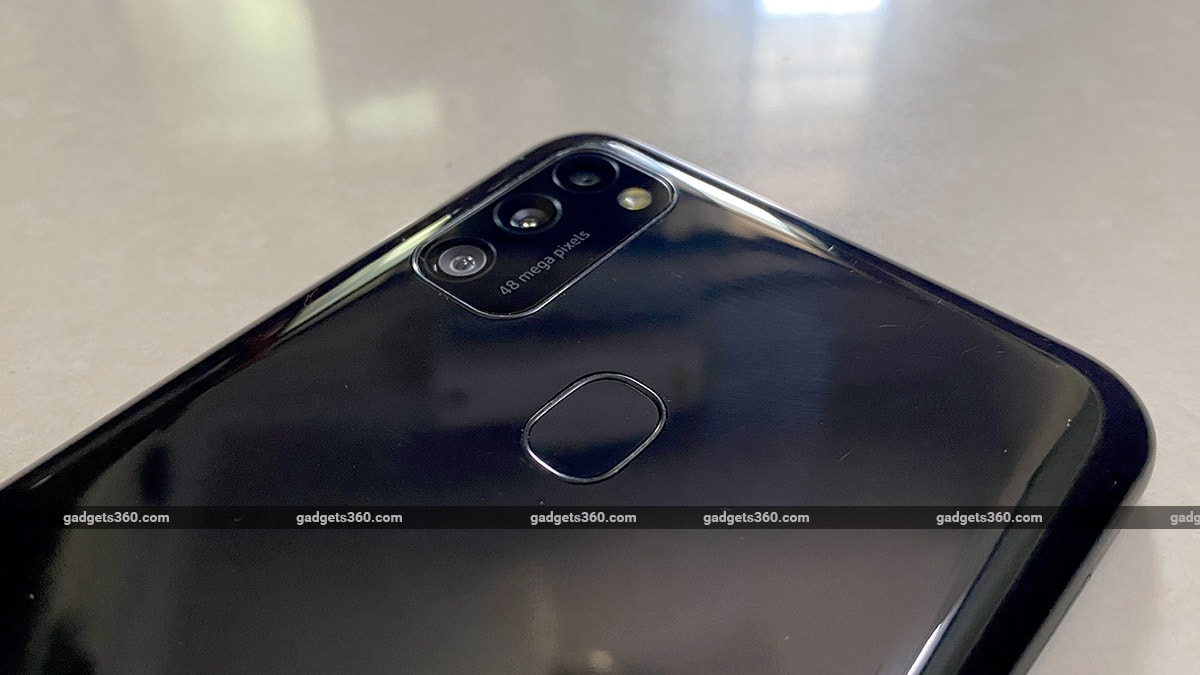 We found some bloatware preinstalled on the device, including Amazon Shopping, Netflix, Prime Video, Helo, and Dailyhunt. We have seen in the past that Helo and Dailyhunt are capable of generating spammy notifications, so we would recommend that you uninstall them if you don't use them. We also found the stock My Galaxy app pushing notifications throughout the day.

This phone gets an Always-on display mode, and Dolby Atmos is available for earphones and Bluetooth headsets. You also have the option to switch to gesture-based navigation instead of the traditional three-button layout. Other Android 10 goodies include a Dark Mode, which takes full advantage of the Super AMOLED panel on the Galaxy M21. Samsung has also added a Game Booster feature that can block notifications and provides quick shortcuts for apps of your choice.

The Exynos 9611 is a capable processor and can take care of basic apps without any signs of slowing down. However, we did notice that heavy apps took some time to load. Multitasking was smooth and we could switch between multiple apps without needing to wait for them to load all over again.

The fingerprint scanner at the back of the device is quick to unlock the device, and so is face recognition. The AMOLED display is the best part of the Galaxy M21 and we enjoyed watching videos on this smartphone. We found the speaker to be tinny, which dampened the overall experience slightly.

We ran benchmarks on the Galaxy M21 to see how it stacks up against some of its competition. The smartphone managed to score 1,77,661 in AnTuTu which is lower than the 191,981 clocked by the Galaxy M31. This could be down to the difference in RAM between the two devices we tested. However, both these scores are far behind those of other phones in this price segment, such as the Realme 6 (Review) and the Redmi Note 9 Pro which scored 290,210 and 279,978 respectively when we reviewed them. 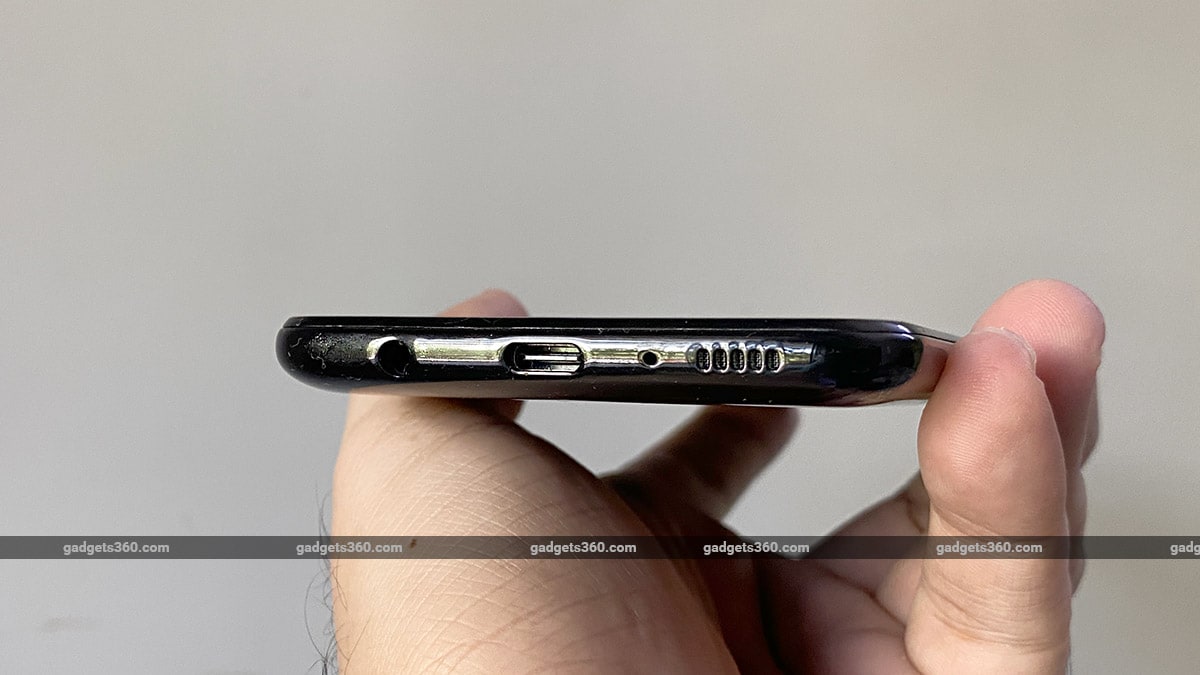 The Galaxy M21 has a USB Type C port to charge the big 6,000mAh battery

We played PUBG Mobile on the Galaxy M21 to see how the phone handles it. The game defaulted to the High settings with graphics set to HD and the frame rate set to High. We did notice some occasional stutter in gameplay which prompted us to drop the graphics quality. After playing the game for 15 minutes we noticed that the device was slightly warm to the touch, and registered a 3 percent battery drop.

Battery life for the Galaxy M21 was excellent. Thanks to the big 6,000mAh battery the phone lasted us for close to two full days of regular use. In our HD video loop test, the device managed to last for 21 hours and 48 minutes, but Samsung phones do automatically reduce brightness once the battery falls below a certain level. Also, the big battery takes over two hours to fill up. Using the supplied 15W charger, the device got to 21 percent in 30 minutes and got to 42 percent in an hour.

Samsung has gone with a triple camera setup on the Galaxy M21, and it is identical to what you get with the Galaxy M30s. The primary camera has a 48-megapixel sensor with an f/2.0 aperture. There's also an 8-megapixel ultra-wide-angle camera with an f/2.2 aperture, and a 5-megapixel depth sensor. The camera UI is easy to use. It has a scene optimiser that can detect what the camera is pointed towards and set the phone up accordingly. Other than the regular photo and video modes, it has a Live Focus, Pro, Night, Food, Super Slow-Mo and a few more.

The Samsung Galaxy M21 is quick to lock focus and meter light, but the scene optimiser isn't as responsive. In photo mode, the Galaxy M21 saves 12-megapixel shots by default. In daylight, we found the camera performance to be good, and the Galaxy M21 managed to capture good details, and text at a distance was legible. However, we would have liked a bit more sharpness in the output. 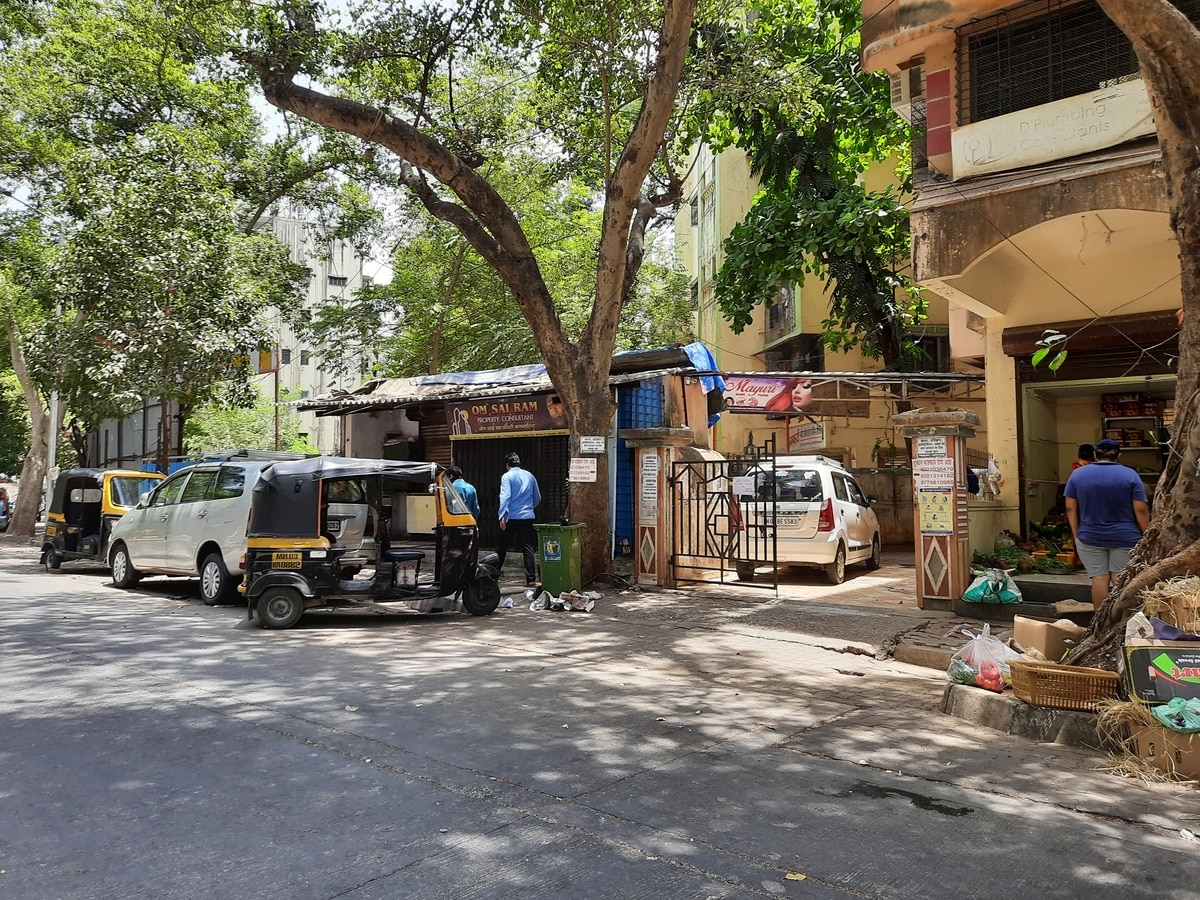 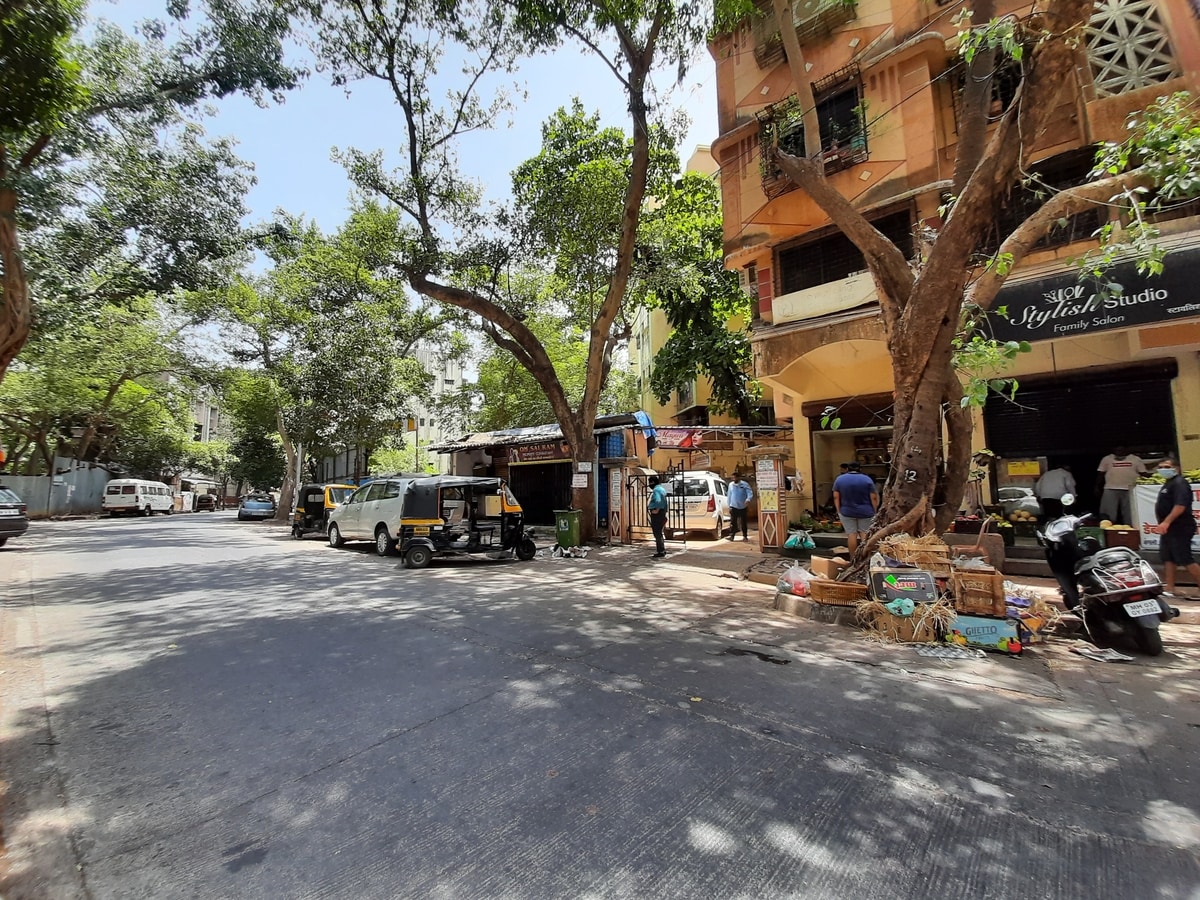 The wide-angle camera has a lower resolution which is evident in photos. It does not manage details as well as the primary shooter. It does offer a wider field of view but there is visible distortion. 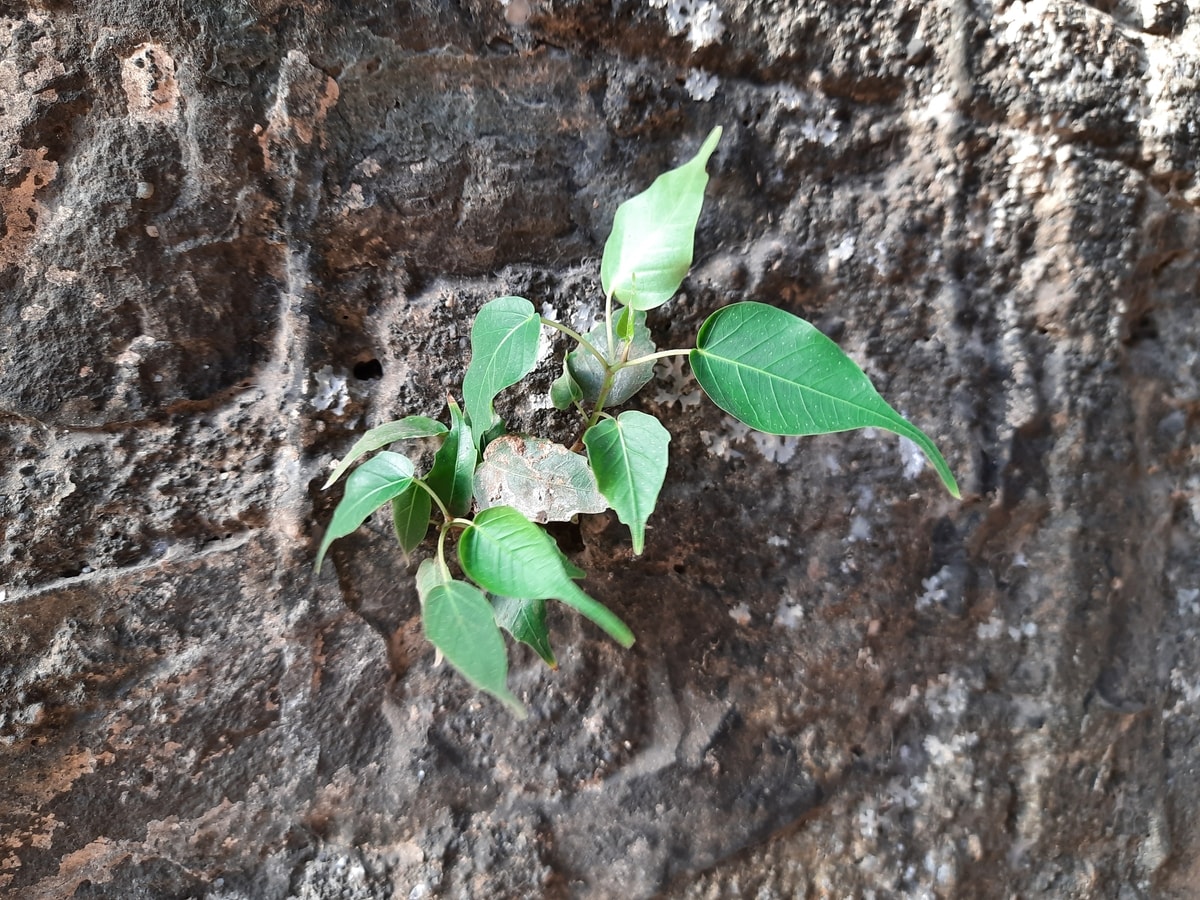 For close-ups, the phone managed to create a natural depth effect between the subject and the background in our tests. The subject was in focus and sharp. With the scene optimiser enabled, the phone bumps up the contrast. 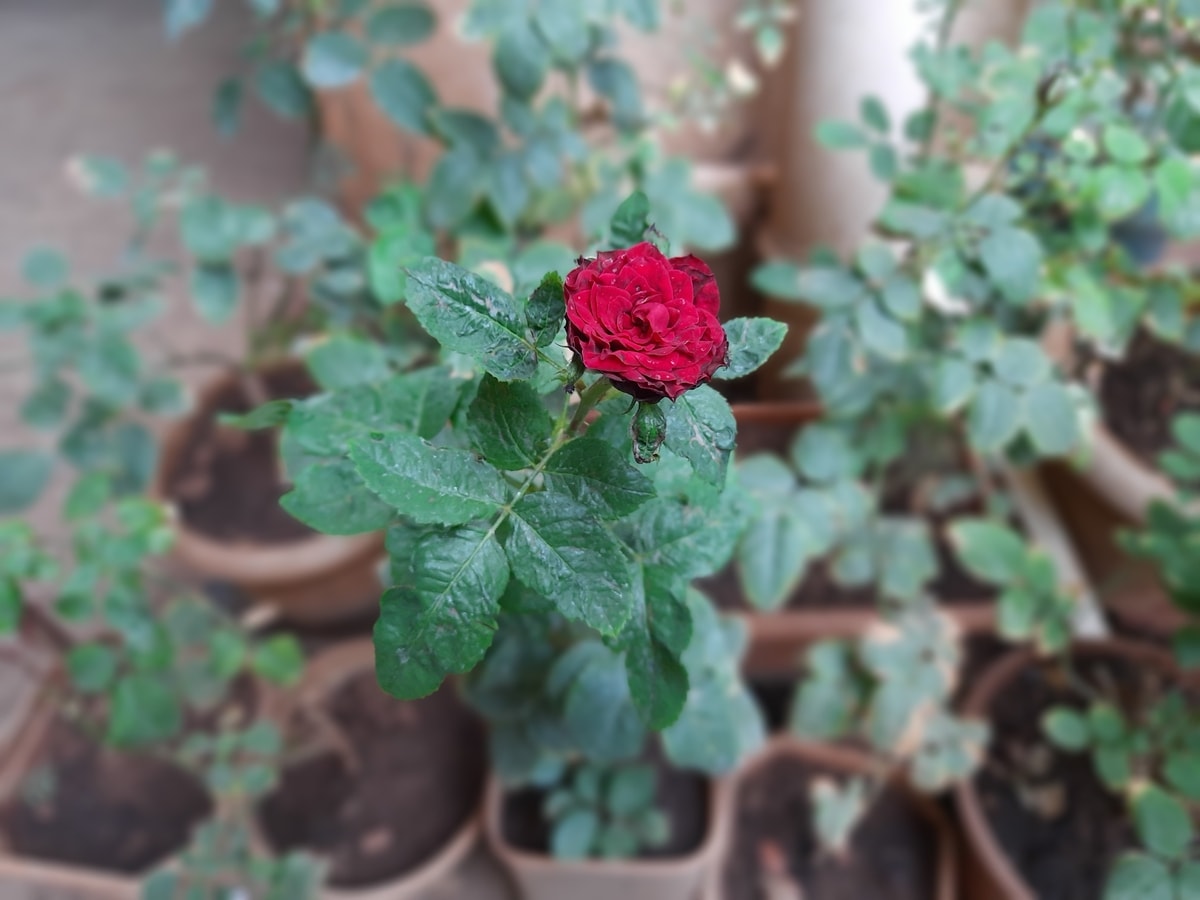 When shooting portraits using the Live Focus mode, the Galaxy M21 lets you select the level of blur in the output. It detects edges well and the software also allows you to change the level of blur and the effect after taking a shot. 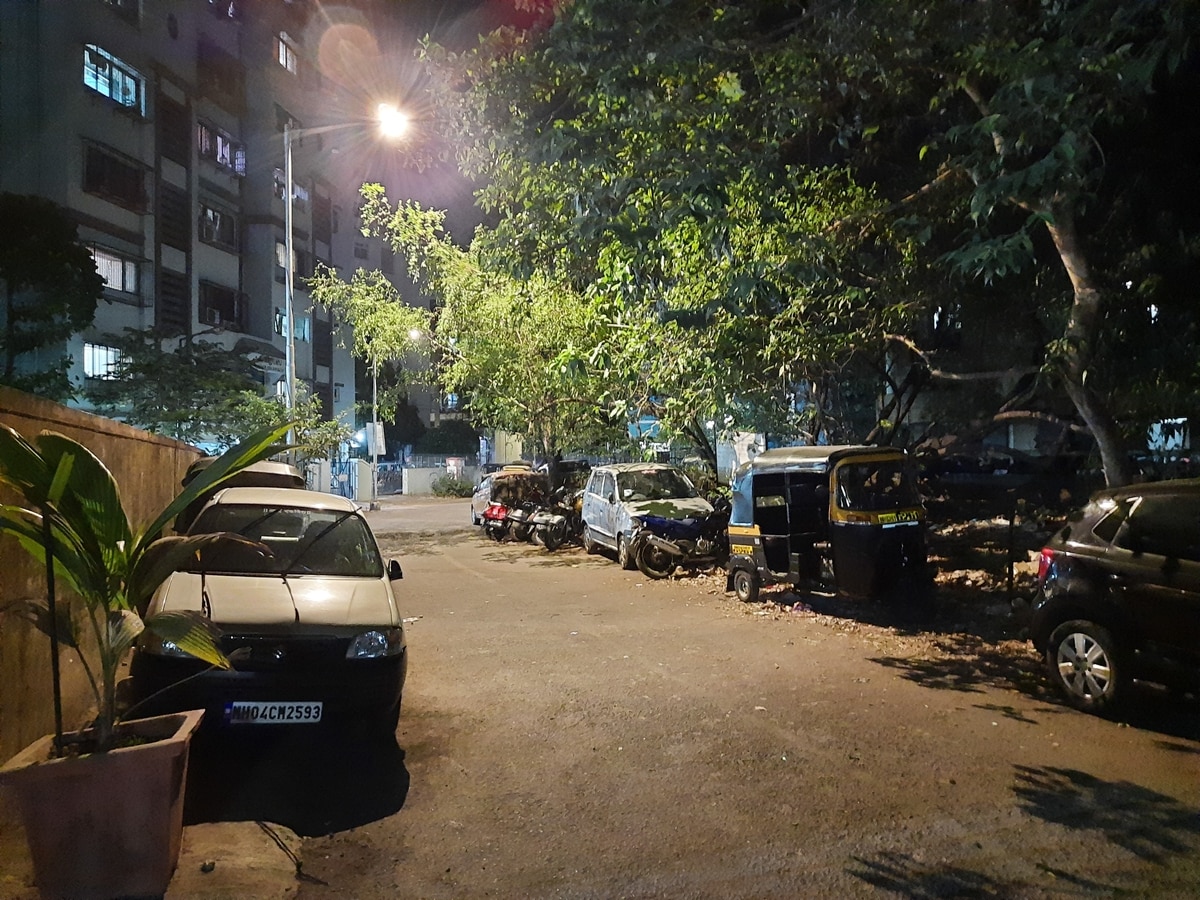 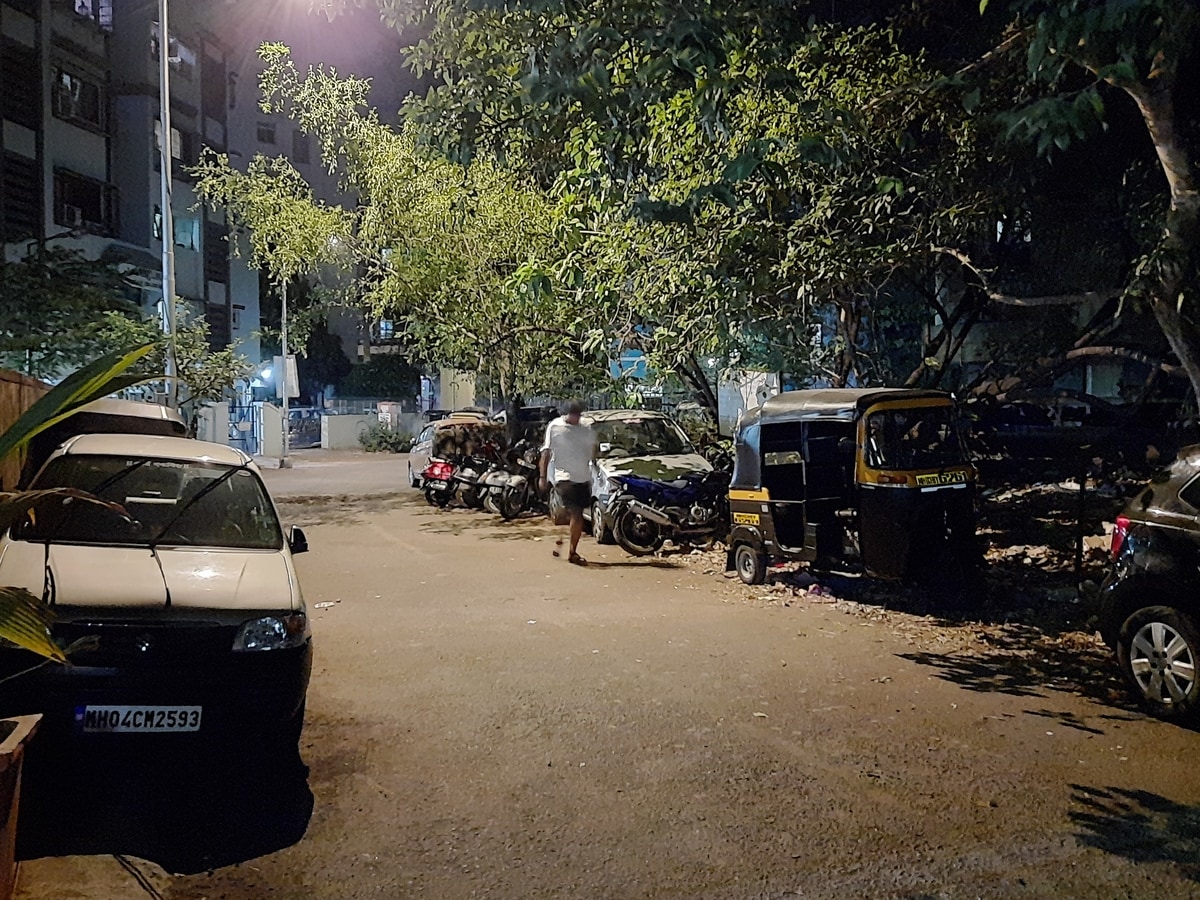 Low-light camera performance is not as good as what we've seen from some of the other phones in this price range that we have tested. The Galaxy M21 managed to keep noise under control but there was a watercolour-like effect in the output. Quality drops further if you use the wide-angle camera in low light. The Night mode on the Galaxy M21 manages to produce slightly better output, but the phone crops the frame slightly to minimise shakes. 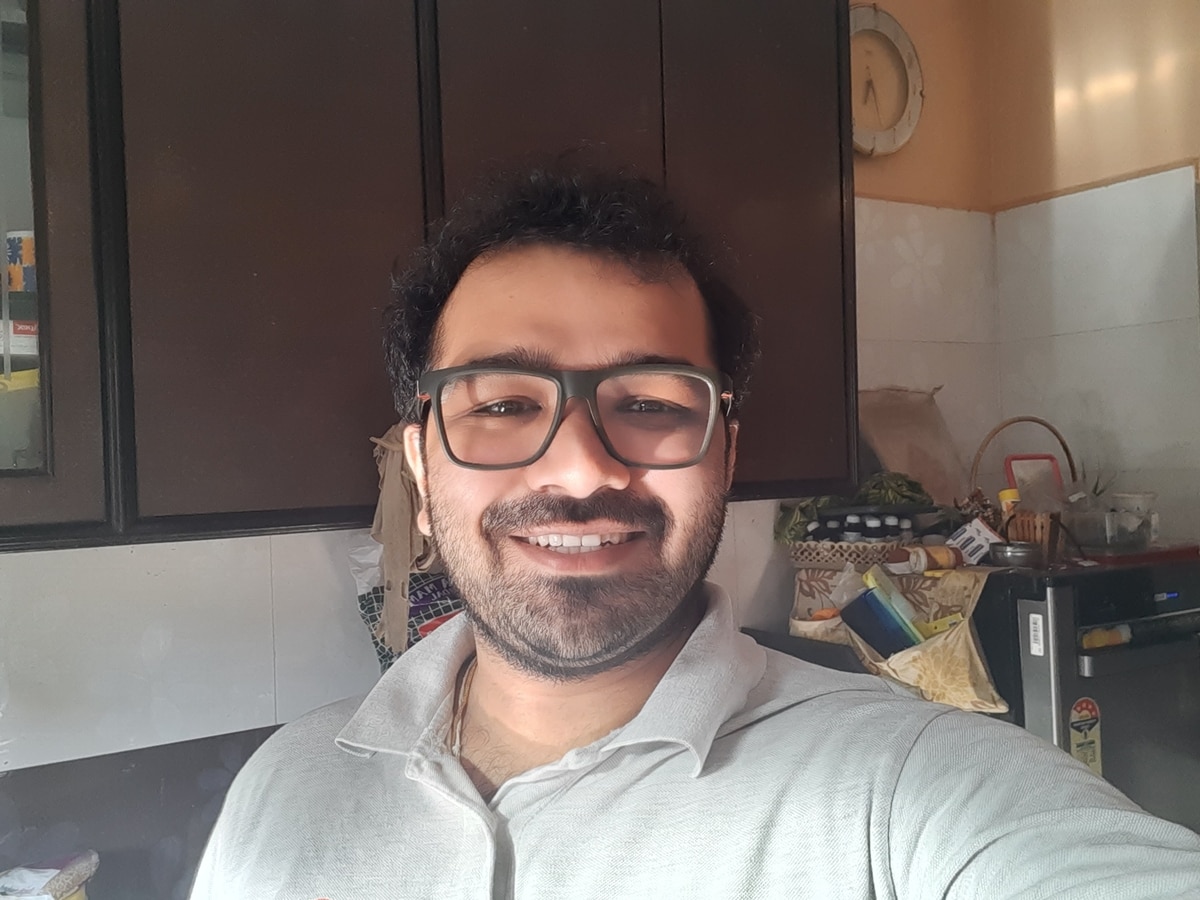 Selfies taken in daylight had good detail, but beautification is enabled by default. The camera UI offers you a cropped view by default but you get a toggle for a wider frame. The selfie camera delivers 12-megapixel photos by default, but you can take a photo at the full 20-megapixel resolution if you change the aspect ratio. In low light, selfies had no noise but grain was visible on zooming in.

Video recording maxes out at 4K for the primary camera but there's has a 10-minute limit for clips, which feels restrictive. The selfie camera is capped at 1080p. Video recorded in daylight had a shimmer effect which could make your footage unusable. There is an ultra-stable mode which delivers better stabilisation. There is no stabilisation at 4K. The shimmer effect was even worse in low light, and the ultra-stable mode did cause a drop in video quality.

However, the Galaxy M21 itself is just an average device at this price point. Competitors such as the Realme 6 (Review) and the Redmi Note 9 Pro (Review) offer much more impressive performance and better cameras at roughly the same price.