Share on Facebook Tweet Snapchat Share Reddit Email Comment
Every two-wheeler rider knows the danger of taking calls while in motion, but that doesn't stop all of them. Samsung's latest Galaxy J3 (6) smartphone is an attempt to make their lives easier. The South Korean company on Thursday announced the Galaxy J3 (6) with S Bike mode, which Samsung says is an "industry-first" feature designed for two-wheeler riders. At the launch, we got to spend a little time with the new Samsung Galaxy J3 (6) and see how the S Bike mode works.

The all-new S Bike mode feature of the Galaxy J3 (6) is based around the core idea that two-wheeler riders should not be distracted by incoming calls. Once the feature is activated, a caller trying to reach the Galaxy J3 (6) owner will be notified through an automated answering system called "Smart Reply". For user convenience, Samsung has placed the S Bike mode toggle in the Quick Settings panel by default.

Users can also activate the mode by tapping the Galaxy J3 (6) smartphone with an NFC tag that ships inside the retail box. The company says that the NFC tag can be affixed to the fuel tank of a bike or on the rider's helmet, so users can easily reach out to activate or deactivate the mode. 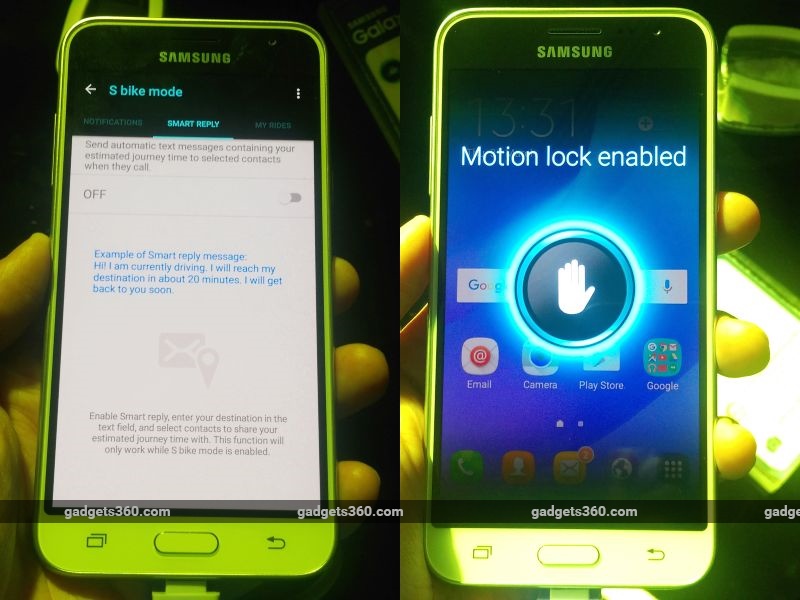 When riding, callers hear a pre-recorded message that informs them that the user is riding a two-wheeler and will be unable to take the call. The phone will not vibrate or ring, and the user remains unaware of incoming calls to avoid distraction while riding. However, callers trying to reach the Galaxy J3 (6) owner can choose to press 1 to force their call to go through in case of an emergency.

Samsung has also added an additional layer of safety for the rider called Motion Lock. This feature makes sure that the rider brings the vehicle to a halt before answering the urgent call. To disable the S Bike mode, users will have to tap and hold a button on the screen.

S Bike mode has an easy-to-use interface which shows the user a log of calls which have been suppressed. The Smart Reply option also allows the Galaxy J3 (6) user to select contacts that will receive a predefined text message with an estimate of when the user is likely to be available for a call based on a trip destination entered by the user before setting off on the ride. Samsung has also introduced built-in reward plans for Galaxy J3 (6) users which will allow active riders earn up to Rs. 1,500 per month from Freecharge. 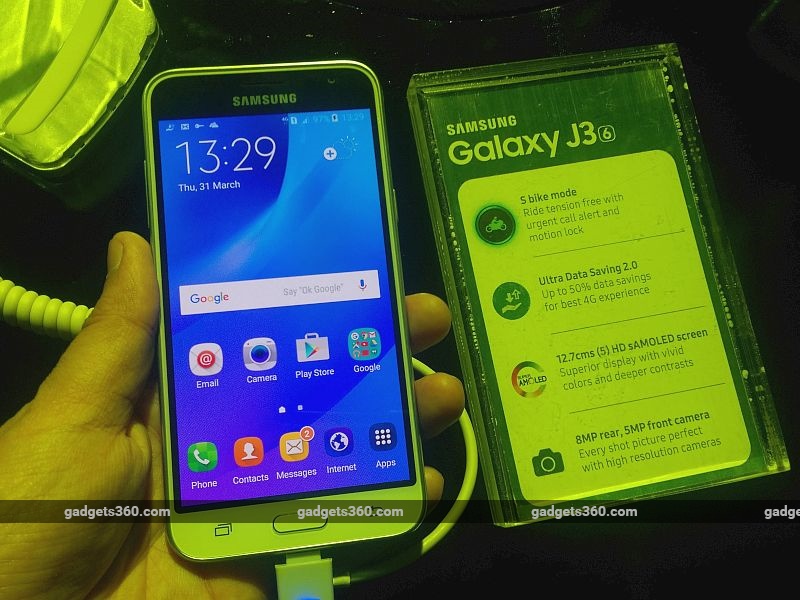 According to Samsung, a highlight of the Galaxy J-series phones is that the S Bike mode was "conceptualised and developed" in Samsung's Indian R&D centres, similar to the Ultra Data Saving (UDS) mode.

On being asked whether the S Bike feature will be coming to any other Samsung Galaxy devices, Asim Warsi, Senior Vice President - Samsung India, stated that it will be made available across all 4G-enabled Galaxy J series devices over a period of time.

As for the phone itself, the Samsung Galaxy J3 (6) doesn't look any different from the company's other Galaxy J-series handsets. It will be available in black, white, and gold. Here are the full specifications of the Galaxy J3 (6).

When we first held it in our hands, the new smartphone definitely felt plasticky. With 5-inch display, the Galaxy J3 (6) can comfortably be used with just one hand. Its rounded edges and faux leather back cover give a decent hold. Overall, in terms of looks, the Galaxy J3 (6) does not deviate from the familiar Samsung Galaxy design. 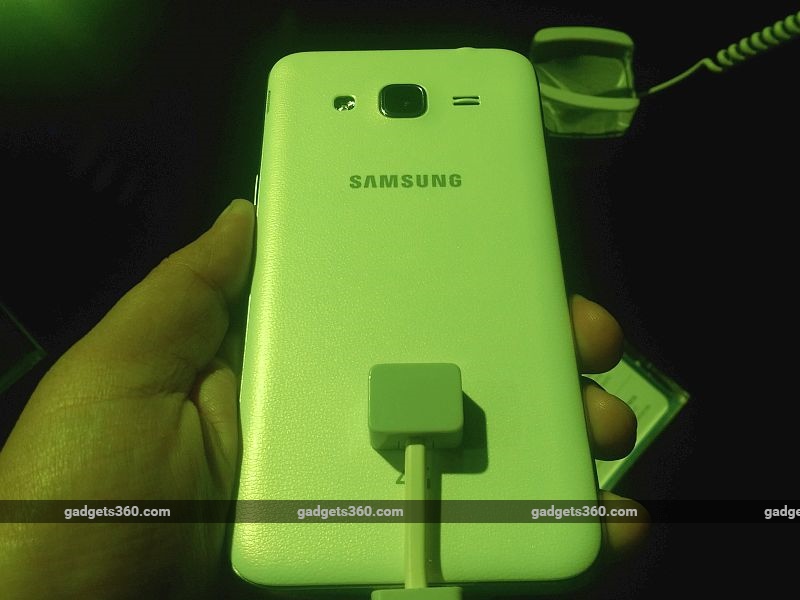 The front of the phone is dominated by a 5-inch Super Amoled display which offers good viewing angles. A metallic ring surrounds the entire face of the phone. Right below the display, there is the signature physical home button, accompanied by capacitive buttons for Back and Recents. The Samsung logo is placed above the display alongside the 5-megapixel front camera. The volume rocker is on the left, while the power button is on the right.

On the rear, we see an 8-megapixel camera accompanied by an LED flash. Similar to other J-series handsets, the Galaxy J3 (6) features a removable rear panel. On opening it, one sees the two SIM slots, a microSD card slot, and the 2600mAh battery. At just 138 grams, the Galaxy J3 (6) feels light enough compared to similar sized phones available in the market.

The handset packs a quad-core processor clocked at 1.5GHz paired with 1.5GB of RAM and 8GB of storage. It supports expandable storage up to 128GB. 4G LTE is supported. The Galaxy J3 (6) runs Android 5.1 Lollipop with Samsung's TouchWiz UI on top, with nothing really new to write about. On the software front, Samsung claims that its Ultra Data Saving (UDS) mode has helped consumers save up to 50 percent on mobile data usage. The company says that the feature now allows data savings on music streaming apps as well.

In our short time with the Samsung Galaxy J3 (6), we found that the handset responded well to touch inputs and was quick with multitasking. The 8-megapixel rear camera on the Galaxy J3 (6) took crisp indoor shots under artificial lighting, though we could not test the camera in natural light. The front camera took average shots indoors, which also lacked detail. We will however reserve our verdict on the Galaxy J3 (6) smartphone's performance and camera till we get a chance to put it through our detailed review process. 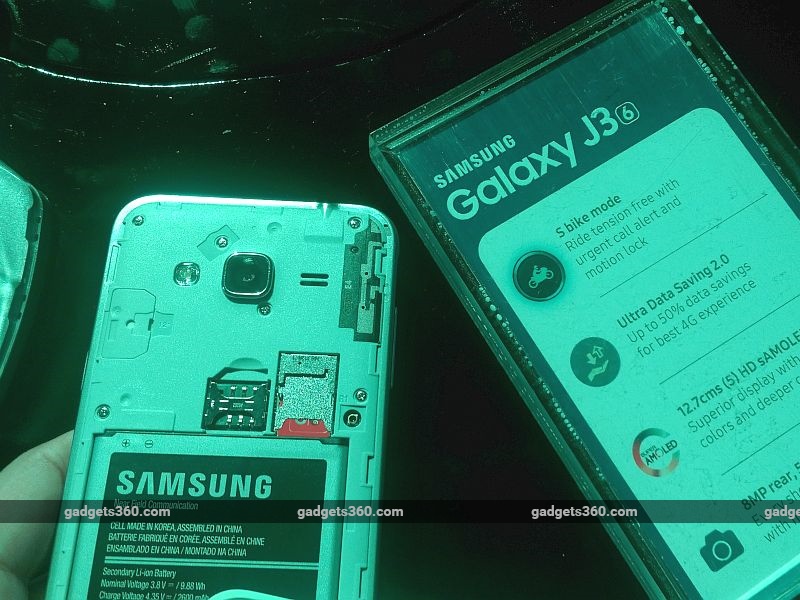 The Samsung Galaxy J3 (6) aka Galaxy J3 (2016) smartphone (initially unveiled in China) has been launched in India with a price tag of Rs. 8,990, and will be available exclusively via Snapdeal from Thursday. At this price point, the handset will be competing against a number of phones in the sub-Rs. 10,000 category. The unique S Bike mode could be a strong selling point, but we will have to wait and see what the initial response is like, and whether people will actually use the mode.

product The Galaxy J3 (6)'s all-new S Bike mode is a unique and interesting feature. Here are our first impressions.