Galaxy J2 Core is Samsung's first Android Go phone but is it any good? Read on to find out

Samsung has been experimenting with its entry-level smartphones for a while now. With limited hardware resources on such low-cost devices, it can be tough to deliver a smooth usage experience. Samsung tried adopting the Tizen OS with its Z-series not too long ago, because Android used to struggle to run. Now, we have Android Go, which is designed specifically for the lowest-end hardware in price-sensitive markets such as ours.

While the Z-series is no longer listed on the Samsung website, the J-series seems to have taken over this segment. The recently launched Samsung Galaxy J2 Core is one of the latest smartphones in the J-series and runs on Android Oreo Go Edition, making it the first Samsung smartphone to ship with Google's stripped-down mobile OS. Priced at Rs 5,990 is it the best entry-level smartphone to go for? We put it through our tests to find out.

The Samsung Galaxy J2 Core is a small smartphone and is easy to hold in one hand. It has a 5-inch display with a 16:9 aspect ratio. There's a Samsung logo below the display but there are no capacitive touch buttons, and this phone uses on-screen navigation buttons instead. The body of the Galaxy J2 Core is made of plastic, but the construction quality is good for the price. The power button is positioned on the right while the volume buttons are on the left. All the buttons are easy to hit thanks to the small dimensions of the phone. The Galaxy J2 Core is available in black, gold, and blue variants, and we had the blue one in for review. 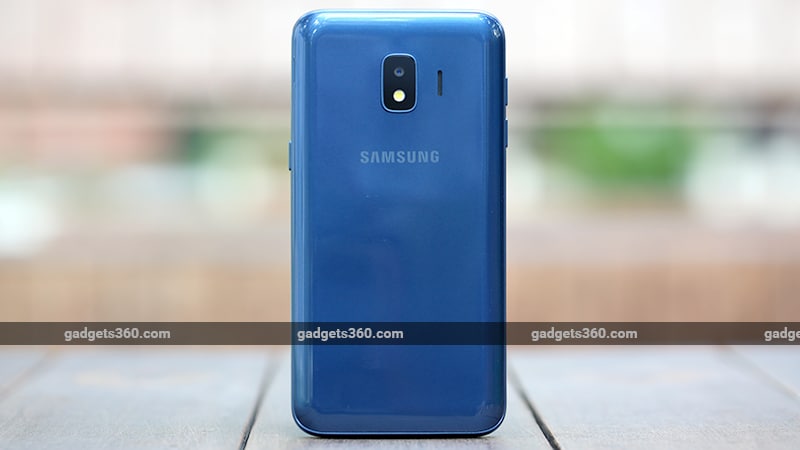 The Galaxy J2 Core has a Micro-USB port at the bottom along with a 3.5mm headphone jack and a microphone. At the back, it has an 8-megapixel camera along with an LED flash placed inside a module that protrudes slightly. Next to it is a loudspeaker grille. The rear panel pops off and gives you access to the removable 2600mAh battery. Once you pull out the battery, you can access the two Micro-SIM slots. There's also a dedicated microSD card slot placed above the SIM 1 slot.

The Galaxy J2 Core sports a 5-inch display with a qHD 540x960-pixel resolution. There's no ambient light sensor, but to make up for that Samsung uses the 5-megapixel selfie camera to gauge the ambient light around you and set the screen's brightness accordingly. This only happens each time the phone is unlocked and is not constantly active like a dedicated ambient light sensor would be. The quality of this display is acceptable for the price but we would have preferred an HD panel, which is now the norm even in this price segment.

Samsung has opted for its own Exynos 7570 processor to power the Galaxy J2 Core. This is a quad-core chip clocked at 1.4GHz and is manufactured using a 14nm FinFET process. The smartphone has 1GB of RAM and 8GB of internal storage, out of which only around 4GB is available to the user. Storage is expandable by up to 256GB using the microSD card slot. The phone also gives you the option to transfer supported apps onto the microSD card, freeing up precious internal storage. There is support for 4G as well as VoLTE, but only one SIM can use it at a time while the other is restricted to 3G networks. Other connectivity options include Bluetooth 4.2, Wi-Fi 802.11 b/g/n, GPS, GLONASS, and Beidou. 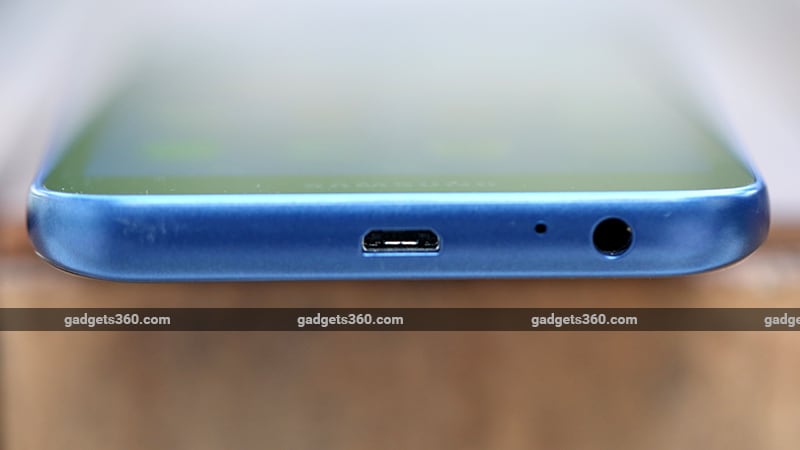 The Galaxy J2 Core has a Micro-USB port and a 3.5mm headphone jack at the bottom

On the software front, the device runs on Android Oreo Go Edition which is a light version of Android Oreo designed to run on phones with low-powered hardware. When we started using the Galaxy J2 Core, it was running the July security patch, but we received an update to the October patch while reviewing it.

You also get preinstalled Go versions of popular apps including Gmail, Google Maps, and YouTube. These apps occupy less space on the device than their standard versions, but have slightly limited functionality. For example, Google Maps Go cannot give you directions and needs a companion app called Navigation Go to enable this functionality.

Samsung has managed to keep bloatware under control and you only get Galaxy Apps, Samsung Members, Samsung Max, and Ultra Apps preinstalled. Ultra Apps lets you run Web versions of apps like Facebook, Instagram and many others while saving on data consumption using Samsung Max.

Looking at the spec sheet we had our expectations in check, but the Galaxy J2 Core managed to deliver a lag-free experience. Basic actions like opening the dialer app, browsing through the menus, and using WhatsApp were quite snappy.

There is limited support for games with this smartphone. While Asphalt 9: Legends and PUBG were not available, we could play Angry Birds and Alto's Odyssey. Both these games were playable with occasional slowdowns. 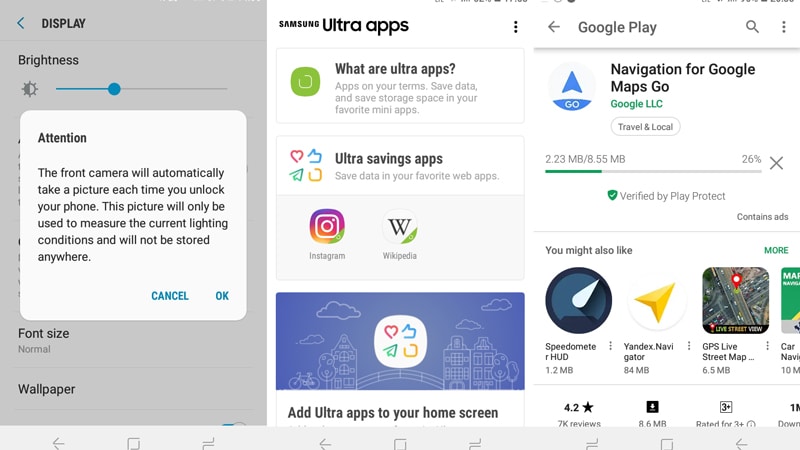 The Galaxy J2 Core offers great battery life. In our HD video loop test, the smartphone managed to go on for 15 hours and 32 minutes. With our usage, which included running a couple of benchmarks, an active WhatsApp account, and Google Maps while driving for close to an hour and a half, the phone lasted us well over a day without needing to be plugged in. The phone also has a battery saver mode, which, when enabled, switches off Bluetooth, Wi-Fi, and GPS when its not in use. When the battery does get empty, it takes a little under three hours to charge it completely with the bundled charger

The camera app on the Galaxy J2 core is quite basic, and you only get filters and a timer, as well as beautification options when using the front-facing camera. There is autofocus for the primary camera but the phone is slow to focus and set the exposure, forcing you to wait. Photos take with the Galaxy J2 Core are good enough to be shared on social media. Objects at a distance lack detail. In landscape shots, we observed that the phone occasionally struggled to set the right exposure, burning the sky out in the final result. 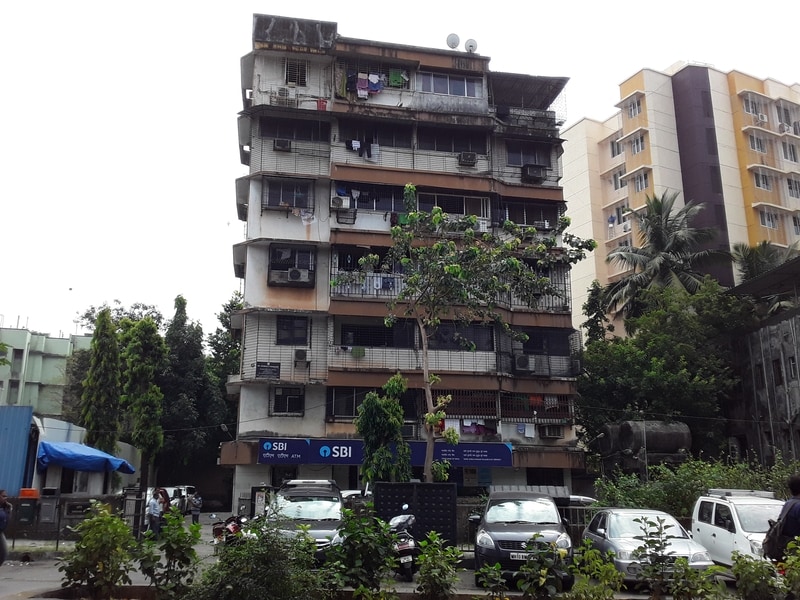 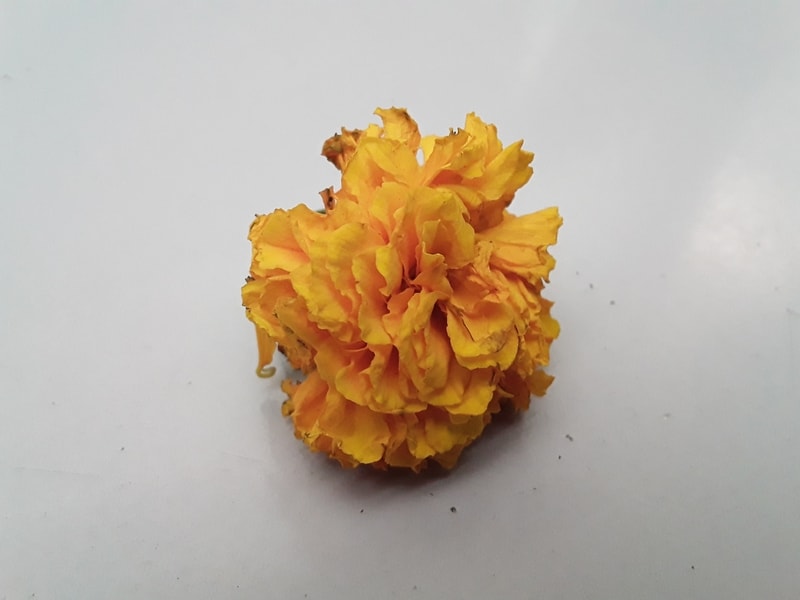 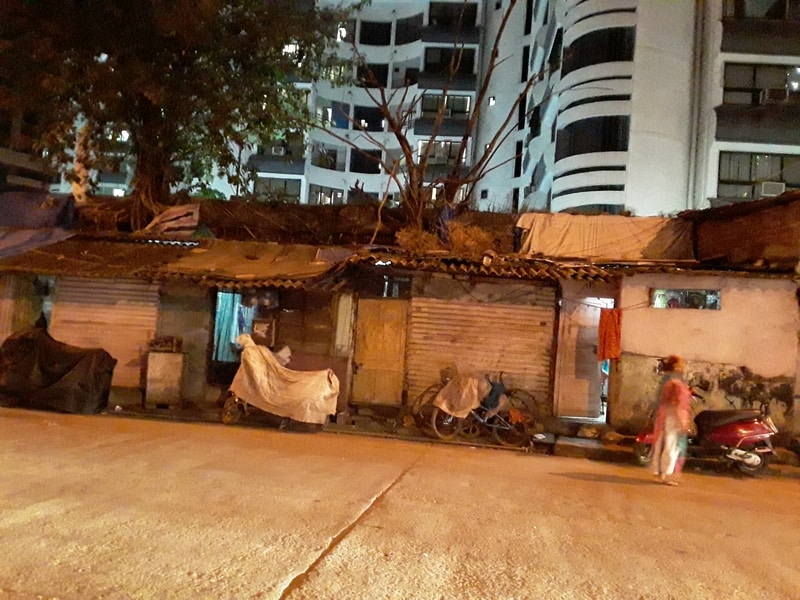 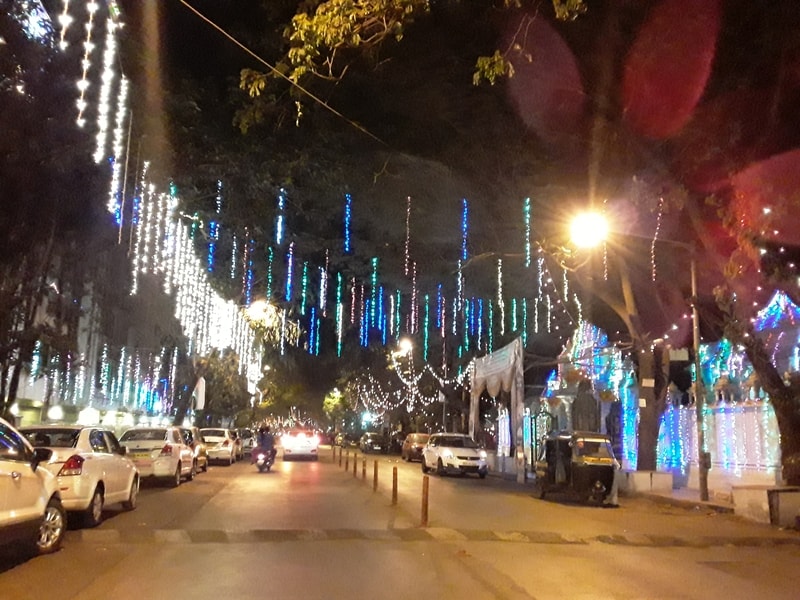 Macros are below average, and you'll need to be patient to get the right focus. Low-light shots need a steady hand. The photos don't have a lot of noise but the output is not very distinct either.

Selfies lack detail as well. Video recording maxes out at 1080p for both the primary and the selfie cameras, and the lack of stabilisation which is acceptable at this price point.

Verdict
The Galaxy J2 Core is Samsung's first Android Go smartphone, and it does get a couple of things right. Despite its low-end hardware like just 1GB of RAM, this phone manages to deliver snappy performance. Battery life is another big plus point. The display and the cameras are where corners have been cut the most.

If you are looking for a low-cost smartphone that offers a good user experience, the Galaxy J2 Core could fit the bill quite well. If you want better specifications then you can consider the Xiaomi Redmi 6A (Review), which has 16GB of storage and an 18:9 HD+ screen, and is available for just a little bit more.

Is Samsung Galaxy J2 Core a budget winner that trumps Redmi 6A? We discussed this on Orbital, our weekly technology podcast, which you can subscribe to via Apple Podcasts or RSS, download the episode, or just hit the play button below.

Further reading: Samsung Galaxy J2 Core, Samsung Galaxy J2 Core price in India, Samsung Galaxy J2 Core specifications
Aditya Shenoy Email Aditya
Aditya Shenoy reviews smartphones, wearables, headphones and speakers for Gadgets 360, out of Mumbai. Aditya is a reviewer for Gadgets 360 and has written extensively about smartphones, software updates, and upcoming devices. Aditya is available on Twitter at @adishenoy, and you can mail him at adityashenoy@ndtv.com, so please send in your leads and tips. More
Sony PlayStation 4 Pro Gets a Quieter Model With a Silent Launch
Typewriter Is the Netflix Original Series From India by Kahaani Writer-Director Sujoy Ghosh