Any new technology is bound to have wrinkles. On Samsung's new Galaxy Fold, a phone that opens into a tablet, they include one prominent crease. It goes down the middle of the Fold's remarkable flexible screen, like a pleat on polyester pants.

I'm sure it will dominate discussion about this much-anticipated gadget, arriving April 26. But after spending a few hours with the Fold, I made peace with the crease. You forget it's there, like the notch on an iPhone X.

There's more to iron out than the screen before the Fold is a phone for most of us. Its weight: three-quarters of a can of soup. Its functions: far better tablet than phone. And its astronomical price: at $1,980 (roughly Rs. 1.4 lakhs), only for first-adopters and the sorts of status-seekers who might also buy a phone studded with Swarovski crystals.

Even if you'd never dream of spending so much on a phone, the Fold is worth your attention as a potential new branch on the evolutionary tree of the most-important gadget in our lives. Our desire to do more, more, more with our phones - working, gaming, watching TV - has outgrown our hands and pockets. To keep giving us more screen, Samsung had to figure out how to break beyond the rectangular slab and into a new world of origami shapes. Not even Marie Kondo generated this much buzz over folding technique.

We just haven't had any details about how, exactly, it feels to use a device that's both a 4.6-inch phone and a 7.3-inch tablet. Until now.

Last week, Samsung executives visited my office and unlocked a briefcase containing a pre-release Fold. For a few hours, they let me poke, prod, fold and unfold the device ahead of its public debut. Afterward, I compared notes with one of my favourite tech industry analysts, Carolina Milanesi of Creative Strategies, who also got a chance to peek inside Samsung's secret briefcase.

We were both impressed with the engineering. The Fold feels more solid and responsive than you'd expect from a first-generation device. It does things we've not seen before, such as make a hinge disappear inside a screen, thanks to an interlocking set of gears you might expect to see on a German car. But we had different views on a few of the Fold's faults.

It's going to take more time to understand whether the Fold is the future or just a Frankenphone. A smartphone and tablet in one could be convenient ... or do both jobs less well. I suspect it has more potential as a replacement for a tablet than as a phone. To find out, I would need to operate the Fold one-handed on my morning commute, try to burn through emails at a coffee shop, and catch up on my Netflix queue on a flight.

But from my hands-on time, I got answers to some of the questions that have been building up ever since Samsung first teased the idea of a folding phone in 2013. Here's what I learned.

How does the Fold work as both a phone and a tablet?

Think of the Fold as a taco. Now lay the folded tortilla on its side. That's the front, or the "phone" part. It's a smidgen taller (6.3 inches) than a "plus"-size iPhone or Galaxy but only three-quarters as wide. The Fold's front screen fills only a fraction of that space, leaving unused space on the top and bottom. 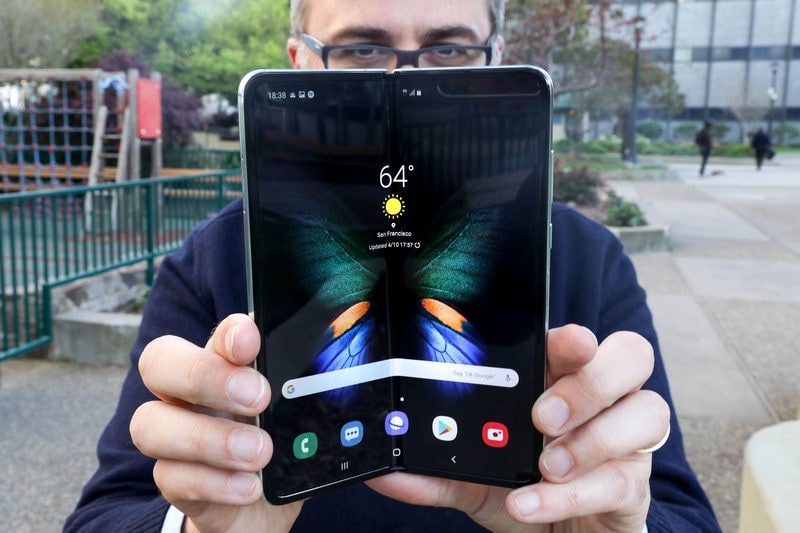 It's enough screen to make calls and look at very skinny versions of apps, but I can't picture using it as much more than a lock and notifications screen. Why didn't Samsung fill up the whole front with screen? Then the screen would be even more skinny. So why didn't they make the front wider? Then it would be harder to grip - one advantage it has as a phone over today's obese iPhones and Samsung Galaxies.

Now open up your taco to expose the yummy bits. On the Fold, that's where the "tablet" part is on a separate interior screen that's a little smaller than an iPad Mini. It's also the most functional part of the Fold, and the screen I kept returning to do almost everything. But typing on such a wide screen isn't really possible with one hand, and I found I wasn't good at typing with two thumbs spread farther apart. (You can adjust the keyboard layout.)

Can the Fold do anything you can't with a phone or tablet alone?

There's a very nicely executed experience that links the exterior phone screen and interior tablet screen. Launch an app on the front, and open up to find it on the full screen.

Beyond that, the Fold seems to be mostly about the convenience of having a tablet in your pocket. I'm just not sure that small tablet is sufficient to do much more than read, watch videos and do email. Opened up, the Fold has the ability to run three apps at once. But doing so makes two of the apps tiny squares.

Can it fit in your pocket?

The Fold is about as thick as a stack of two smartphones, or two-thirds of an inch. I ran around stuffing it in a variety of pants, jackets and even tunics - and it wasn't as bulky as I had worried. You just might want to avoid putting it in skinny jeans. My bigger concern is the weight: At nearly 9.3 ounces, it's 68 percent heavier than Samsung's flagship Galaxy S10 phone (5.5 ounces), and approaching the weight of a can of Campbell's soup (12.3 ounces).

Milanesi of Creative Strategies said people spent years (before slender smartphones) carrying devices that were bulkier and heavier than the Fold. "Clearly it is not a mass-market device, but I don't think people will pick it up and say it is so heavy," she said.

It's a matter of perspective: If you're used to carrying around a phone and a tablet, the Fold feels like relief - but if you've been enjoying the thinner-and-lighter trend on other electronics, the Fold might be a burden.

How bad is that crease?

The crease is there and a little surprising, at first. The crease is more visible when you look at the phone from the side than head-on. But it doesn't get in the way of reading a story or watching a video, and mostly disappears when the screen is lit up.

Milanesi noted it's impressive that the folding doesn't cause any rendering, colour or touch-responsiveness problems in the OLED screen.

Our consensus: People will talk about the crease so long as folding screens seem new, but you won't notice after a while.

Does repeat folding ruin the Fold?

In one sprint, I tried opening and closing it 100 times, and couldn't detect any damage. Samsung says they've got a robot that has done that a few more times than me - 200,000, to be exact - and also haven't had any problems. Stretched over three years, that would be more than 180 foldings per day.

How does it feel to fold?

Almost as good as a Razr flip phone from 2004. You can close it with one hand, and there's a very satisfactory thunk.

Opening is more of a challenge. The phone's hinge is stiff, so it's a two-handed job, which isn't nearly as fun as flicking open a flip phone - and also not great for people standing on trains.

I expected it to feel a bit janky, but it was as solid as a stiff glasses case. It's possible the hinge on a Fold could loosen over time: One of the three models Samsung brought me had a slight give when I squished it like a stress toy.

What happens when you drop it is another question. The front screen is glass and could crack. The interior screen is, possibly, less likely to crack because it is made of plastic. But that same material might also be more inclined to scratches. (I didn't take a sharp object to Samsung's prototype to find out.)

The biggest concern is that, like Gremlins, you cannot get the Fold wet. Water might get in through the hinge.

Samsung said it will offer an exclusive care program for Fold customers but didn't share any details.

How do the cameras work?

There are six total: one for selfies on the front, three on the back for zoom, regular and wide shots, and two cut out from the screen on the inside for even more selfies.

What I liked: In tablet mode, the back cameras are in the right spot for taking regular photos and give you that big lovely screen as a viewfinder. The shutter icon smartly moves to exactly where your finger needs it.

How does all that screen affect battery life?

We don't yet really know. Samsung built two batteries into the Fold, totalling an extraordinary 4,380 mAh. That's a significantly larger battery than you'll find in almost any other phone. Samsung claims it should keep the phone going "all day," but it might depend on whether you use the Fold primarily as a phone or a tablet.

So why do we need a folding phone?

Samsung still has a lot to figure out on this. Perhaps that's why it's focusing on a high-end - and more-forgiving - market for its first folding phone.

Design critics have said the Fold suffers from the problem of combining desires that sound reasonable together but end up ruining each other - like the Homer Simpson Car on a beloved episode of "The Simpsons."

To me, the Fold's usefulness as a one-handed phone seemed to take a back seat to its capabilities as a two-handed tablet. The question is: How many people really need an Android tablet with them at all times?

Samsung was right years ago about the trend toward larger-screen phones, which not that long ago we used to jokingly call "phablets." The Fold combats the distressing trend of people needing handles, like those stick-on circular PopSockets, just to firmly grip their phones. If it catches on, the Fold could be the beginning of an era where big phones really are just tablets.

Perhaps the lesson from the first folding phone will be about the value of making devices smaller. Instead of doing origami on a tablet, imagine folding in half the phone you already own. "I don't just want bigger screens, I want being smart with the screens you have," Milanesi said. Welcome back, flip phones.

product Any new technology is bound to have wrinkles. On Samsung's new Galaxy Fold, a phone that opens into a tablet, they include one prominent crease.