Samsung surprised us by launching the previously unheard of Galaxy E5 and Galaxy E7 alongside the Galaxy A3 and Galaxy A5 at an event in Mumbai yesterday. We had a little time with all four devices. Here are our early impressions of the new Samsung Galaxy E series.

The two new smartphones which Samsung has clubbed into a new E series are definitely responses to current industry trends. Before even getting into specificatons, Samsung touts both devices' screens and front cameras, which have become increasingly important selling points.

Priced at Rs. 19,300 and Rs. 23,000 respectively, the new Samsung Galaxy E5 and Samsung Galaxy E7 will fight for space in the market with other Samsung models, including the Galaxy Grand 2 (Review | Photos), Galaxy S4 (Review), Galaxy Note 3 Neo (Review | Photos), and of course its siblings, the Galaxy A3 and A5. The Korean giant has never had any shortage of smartphone models in the market but honestly, it woudn't hurt them to ensure better segmentation so that customers know what to choose. 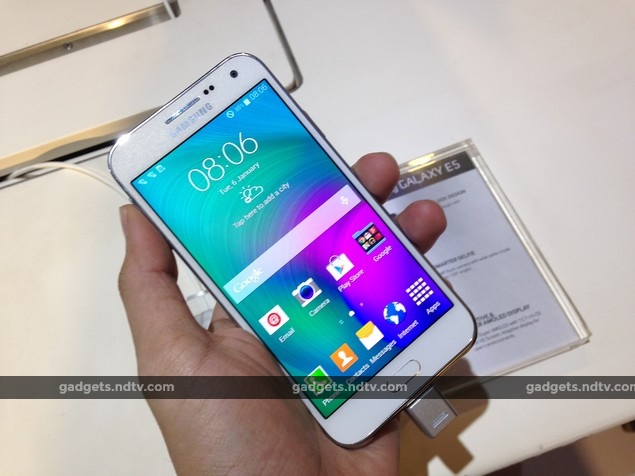 Both devices have plastic bodies with metallic sides and accents. The rims are more pronounced than those on the A series phones. In all other regards, the two look exactly like every other recent Samsung Galaxy phone - flat fronts, rounded corners, oblong physical Home button, and silver accents all around. This is a look we've begun getting tired of, and it would have been nice to have seen Samsung break out of its mould. Honestly, it would be very tough to identify the E5 and E7 in a lineup of all the devices Samsung has released in the past few years.

Both phones have plastic rears, with the sort of shimmery finish that we first saw on the Galaxy S5, though minus any dots (and faux leather stitching). The square camera lenses are flanked by a flash and a speaker grille. 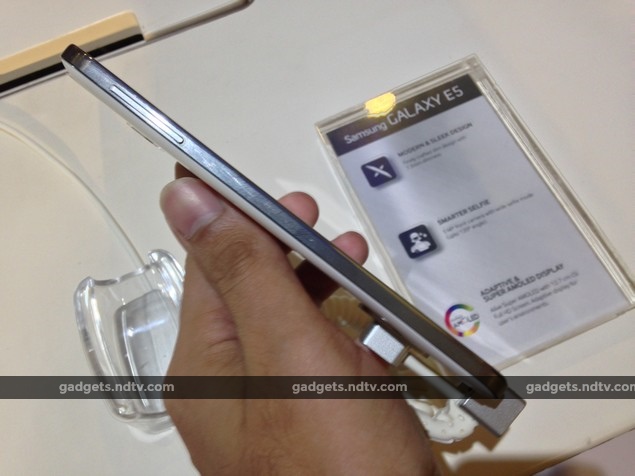 The headset sockets are on the bottom, next to the Micro-USB ports. Volume buttons are on the left, while the power buttons and card slots are on the sides. The devices do not have removable rear panels.

Both phones look physically identical, apart from a slight difference in size, but the specifications do vary. 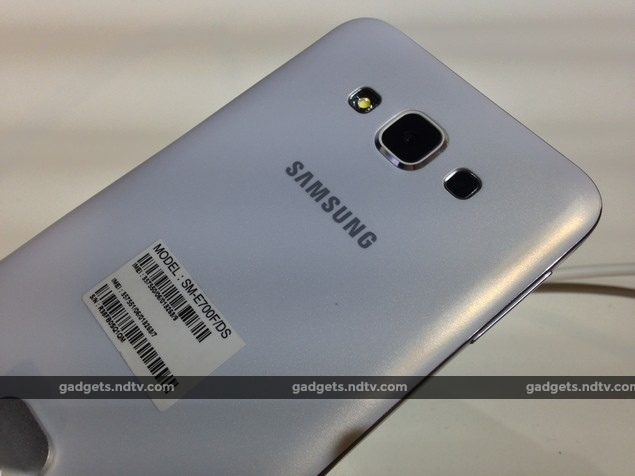 Both phones felt comfortable to hold, though the E5 was just a bit easier to handle. The first thing that struck us was Samsung's current-generation TouchWiz interface, with all the same icons and visual flourishes that we've seen since the Galaxy S5 launched. This is a matter of personal taste, but we could definitely see reasons to tone it all down. Both devices run Android 4.4 KitKat but updates to 5.0 Lollipop are expected - the sooner, the better.

Performance felt snappy and the screens were reasonably sharp and rich under indoor lighting. We did not experience any sluggishness in our brief time with the Galaxy E5 and E7, although detailed analysis will have to wait till we can run our own tests when we conduct full reviews. We did not have much chance to test the cameras as both devices were tethered.

The Samsung Galaxy E5 and Galaxy E7 appear to be solid mid-range offerings which will compete with similarly priced devices from the likes of HTC, Sony, Microsoft, LG, Oppo, Gionee and others. Stay tuned for our full reviews, in which we will test both phones' performance, camera quality, battery life, ease of use, and more.