Samsung Galaxy A80 First Impressions: The Phone With 3 Rotating Cameras

In an effort to take on the increased competition from the Chinese smartphone makers, including Xiaomi, Vivo, and Oppo, Samsung has been on a reinvention spree this year with its smartphone lineups. Samsung started the year with its India-first Galaxy M series of phones in January, followed by a refreshed Galaxy A-series in February. The South Korean consumer electronics giant clearly doesn't seem to want to leave any stone unturned in an effort to make its smartphones ready for both the consumers and the competition, as evident by the launch fo the brand new Galaxy A80. Set to lead the company's revamped Galaxy A-series, the Samsung Galaxy A80 brings a number of firsts for Samsung. We managed to spend some time with the phone ahead of the company's launch event in Bangkok on Wednesday, and here are our first impressions.

With all of its new Galaxy A-series phones this year, Samsung has followed a very specific design language but the new Samsung Galaxy A80 has become the first phone to break that mold with a very interesting form factor that includes a slider as well as a rotating triple camera setup. What this means is that the same set of cameras is used to take pictures and videos from the front and back — they just flip, based on whether you want to take selfies, or capture stuff from the rear camera.

Samsung says that the phone has been made for the “Era of Live,” which is basically company-speak for the current usage patterns where more and more consumers are using their smartphone cameras to express themselves online. With the Galaxy A80, Samsung is hoping to appeal to these consumers by offering a rotating triple rear camera setup that can be used to captures selfies, take video selfies (velfies?), regular photos, and regular video recordings. 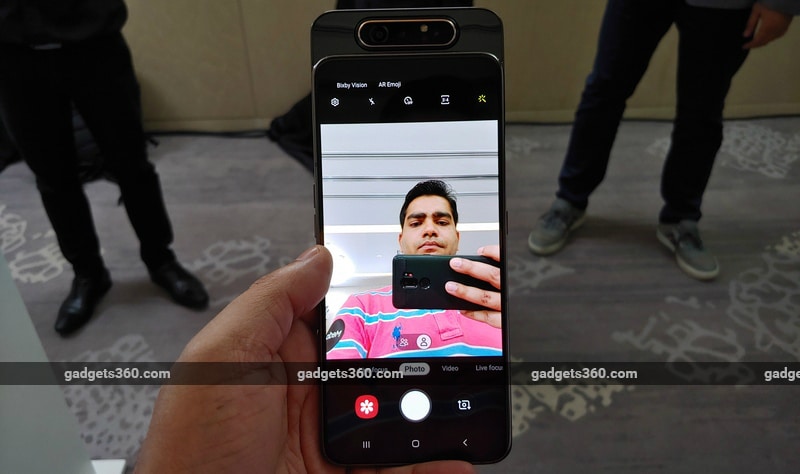 The camera setup aside for the moment, Samsung Galaxy A80 has several other things going for it. Built with glass and metal, the smartphone looks great and feels solid and premium in hand, however given the large size of the phone, some consumers may find it hard to operate with just one hand. Also, the glass front and back of the phone pick up fingerprints easily, but it is equally easier to wipe them off.

The phone's construction quality is great, and Samsung says that it has thoroughly tested both sliding and rotating mechanisms and they won't create issues for the consumers during the smartphone's lifetime. We will obviously be putting Samsung's claims to test as part of our full review process at a later stage.

On the front, the Samsung Galaxy A80 has a 6.7-inch full-HD+ (1080x2400 pixels) Super AMOLED display, which the company is calling “New Infinity Display”. Thanks to the sliding and rotating camera setup, there is no notch or any other distraction on the front of the phone.

Further, the phone doesn't include an earpiece; instead the phone's screen is used to generate sound, similar to what we have previously seen in LG G8 ThinQ and Huawei P30 Pro smartphones. The front also houses an in-display fingerprint sensor. 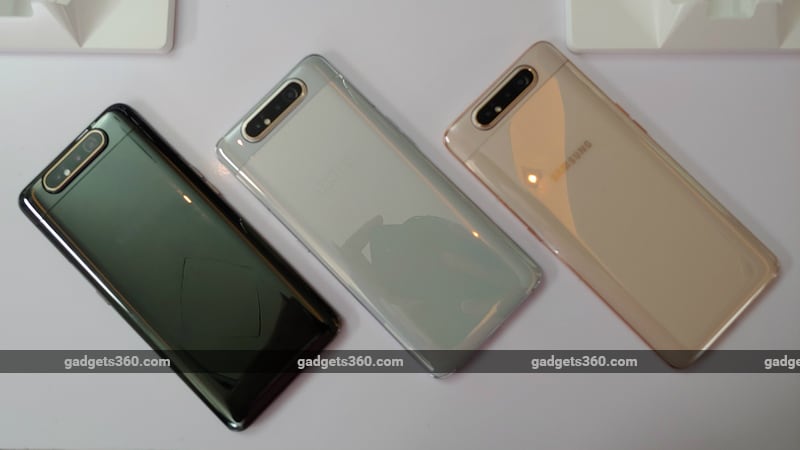 The big highlight of the Galaxy A80 is obviously the triple camera setup. So, basically, what Samsung has done, is placed a rotating triple camera module in a sliding mechanism. This setup looks like a normal part of the phone when you are not using the phone's camera to capture selfies; however as soon as you tap the front camera icon in the camera app, the sliding mechanism goes to work and pushes the camera setup up from its existing position. The camera setup is then immediately rotated to face you. This whole exercise is quite seamless and doesn't take long.

The triple camera setup houses a 48-megapixel primary sensor with an f/2.0 lens, an 8-megapixel secondary sensor with an ultra-wide-angle (123-degree) f/2.2 lens, and a 3D depth camera. We will have more on the camera's capabilities and its real-world performance in our Samsung Galaxy A80 review.

There is 8GB of RAM and 128GB of onboard storage as well. Unfortunately, there is no microSD card slot for storage expansion. The Galaxy A80 also comes with 3,700mAh battery with Super Fast Charging support as well as USB Type-C port. There is no 3.5mm audio jack in the smartphone, which will certainly irk some prospective buyers. The company says it is going to offer the Galaxy A80 in Ghost White, Angel Gold, and Phantom Black colours, though not all colours options may release in all markets.

On the software front, the Galaxy A80 runs on Android 9 Pie with Samsung's One UI, which includes the usual bells and whistles. During our brief usage, we found the overall performance of the phone to be snappy and quite fluid without any visible signs of lag or stuttering.

We will have more on the Samsung Galaxy A80 in our full review closer to the India launch of the smartphone.

Disclosure: Samsung sponsored the correspondent's flights and hotel for the trip to Bangkok.

product Samsung Galaxy A80 sports a sliding triple camera setup that rotates to work both as rear and front shooter. The Samsung A80 runs on Android 9 Pie with One UI.