Samsung Galaxy A8+ (2018) will be exclusively available via Amazon India

The Samsung Galaxy A8+ (2018), launched in India on Wednesday, is the company's latest entry into the sub-Rs. 35,000 price segment. The smartphone brings a lot of the features and styling of the flagship Galaxy S8 and Galaxy Note 8 to a more affordable price point. The key Galaxy A8+ (2018) features include the likes of Live Focus for the front camera, face recognition technology, Bixby voice assistant and, of course, Samsung's Infinity Display panel. The Galaxy A8+ (2018) has Samsung Experience 8.5 based on top of Android 7.1.1 Nougat that delivers a customised experience.

As for the price, Samsung Galaxy A8+ (2018) has been priced at Rs. 32,990, and it will be available starting January 20, exclusively on Amazon.in. There are features aplenty and the price is competitive enough to make sure the new Samsung smartphone can give tough competition to the likes of the OnePlus 5T, Nokia 8, and the recently launched Honor View 10. We spent some time with the Galaxy A8+ (2018) at the launch event and here are our first impressions.

Starting off with its design, the Samsung Galaxy A8+ (2018)'s looks are reminiscent of the Galaxy S8 and Galaxy Note 8 thanks to its proportions, curved glass, glass back, and the Infinity Display. The device is 8.3mm thick, 75.7mm wide, and 159.9mm tall. It isn't very compact, but it is comfortable enough to hold for a device that sports a 6-inch display. The weight of 191g makes it significantly heavier than the Galaxy S8 and even the Galaxy S8 Plus.

The Samsung Galaxy A8+ (2018) features a 6.0-inch sAMOLED full-HD screen that has a resolution of 1080x2220 pixels and an 18.5:9 aspect ratio, which Samsung calls Infinity Display. Much like on Samsung's current flagship models, it looks nice and vibrant with good brightness levels even in sunlight. Viewing angles are decent and the colour reproduction levels seemed accurate.

The display occupies most of the real estate on the front of the device, which is why there are on-screen buttons instead of physical or capacitive keys. Above the screen is the dual selfie camera setup, the first on a Samsung smartphone. There's one 16-megapixel sensor and one 8-megapixel sensor. We were able to spend a little time with the phone and we tried out the Live Focus feature which seems like a Portrait Mode but is not quite there yet. It couldn't detect the edges of people's faces very well, and the result was a bit underwhelming. The face recognition technology seems to work fine and recognised different faces even in low light. The rear camera has a 16-megapixel sensor with an f/1.7 aperture lens which should indicate good low light performance, but we could not test this in the limited time we had with the device, so stay tuned for our full review. 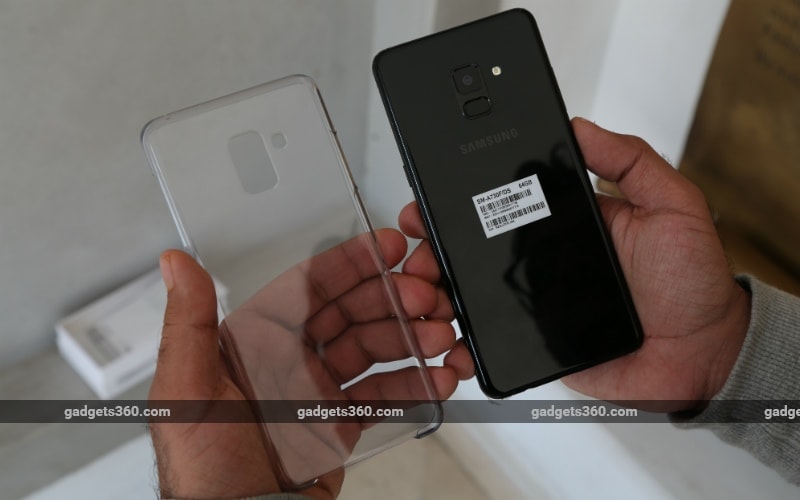 The back of the device, although made of glass, offers a decent grip owing to Samsung's curved design. However, it's a fingerprint magnet and we are concerned about how well this phone can survive being dropped. The fingerprint sensor now has a new location; right below the rear camera sensor. While the placement is definitely more ergonomic than that on the Galaxy S8, the size could be an issue for users with stubby fingers.

The Galaxy A8+ (2018) features a loudspeaker and the power/ lock button on the right. On the left side, you'll find the volume rocker and a tray for one Nano-SIM. There's a USB Type-C port, a microphone, and a 3.5mm headphone jack on the bottom. The headphone jack has been retained on Samsung smartphones, although competitors including Apple and Google have eliminated it from their latest smartphones. On the top is the secondary microphone, the second SIM slot, and a microSD card slot.

At the core of the Galaxy A8+ (2018) is the new octa-core Samsung Exynos 7885 SoC, with two cores clocked at 2.2GHz and six cores clocked at 1.6GHz. The Exynos 7885 is the latest mid-range processor from Samsung and we will get to test out its performance in our full review. The smartphone also has 6GB of RAM. It features 64GB of inbuilt storage which is expandable via microSD card (up to 256GB). 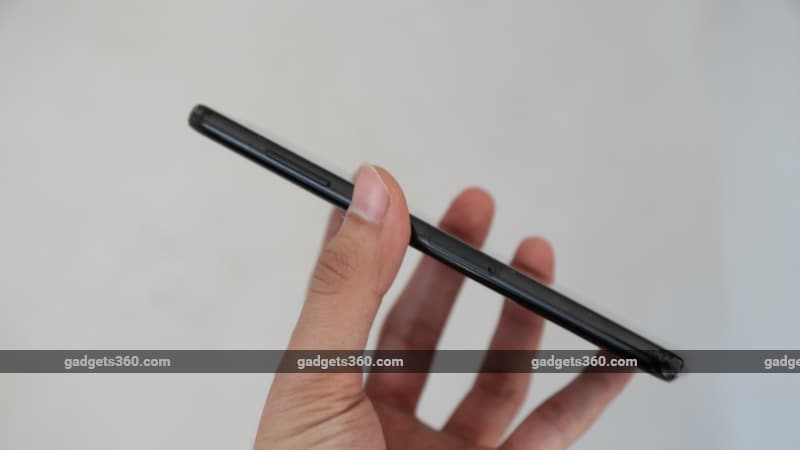 Interestingly enough, Samsung has gone with Android 7.1.1 Nougat, and there's no official word on an Android Oreo update. The Samsung Experience 8.5 custom UI replaced TouchWiz UI long ago, and while it is a lot cleaner, we still noticed slight lags in the animations in the short time we spent with this phone at the event.

The custom UI has some unique features and shortcuts such as Hold Palm, which lets you take a picture by holding your palm in front of the front camera for a few seconds. It also has a one-handed mode that seems quite handy, especially for a 6-inch display device. Additionally, the smartphone has a few Samsung apps such as Samsung Connect, Samsung Health, Samsung Members, and Galaxy Apps. It also comes with Microsoft apps including Word, Excel, Powerpoint, OneDrive, and LinkedIn.

The Galaxy A8+ (2018) has a 3500mAh battery, and we will evaluate its battery performance in our full review.

Stay tuned to Gadgets 360 to catch our full review of the Samsung Galaxy A8+ (2018) in which we will check its performance, battery life, camera quality, display, and everything else.