Samsung Galaxy A7 (2018) is one of the latest smartphones to be a part of Samsung’s Galaxy A-series. It also happens to be the first smartphone from the Korean giant to sport a triple camera setup at the back. We would expect a phone from the Galaxy S series or Note series to be the first to get new high-end features, so it’s quite surprising to see an A-series model getting such attention. That's not all, Samsung also launched the Galaxy A9 (2018) recently, which is the first smartphone in the world to sport a quad-camera setup at the back. While this might slightly dampen the buzz around the Galaxy A7 (2018), are its three cameras versatile enough to give it an edge over the competition in its price segment? We put it to the test to find out.

Samsung seems to have taken a new approach with the A-series of late. When this series was first unveiled, it comprised of devices with metal unibodies and IP certifications. The Galaxy A7 (2018) and a lot of other recent models such as the Galaxy A9 (2018) and Galaxy A8+ (2018) (Review) sport glass panels at the back. Samsung told Gadgets 360 that millennials are the target market for the A-series, and they prefer glass over other materials. As a result, the Galaxy A7 (2018) has a mid-frame that is sandwiched between glass on the front and rear. The frame is well built, but feels like plastic to the touch and does not get cold in an air-conditioned room.

The 6-inch display on the Galaxy A7 (2018) has an 18.5:9 aspect ratio. Samsung also refers to it as an Infinity Display, but it does not curve around the edges of the device like it does on the Galaxy S9 (Review) and Galaxy Note 9 (Review). The bezels on the sides are slightly thicker than we would like, but the top and bottom bezels are symmetrical. The earpiece, selfie camera, flash, and an array of sensors are placed above the screen, while the space below it is blank. 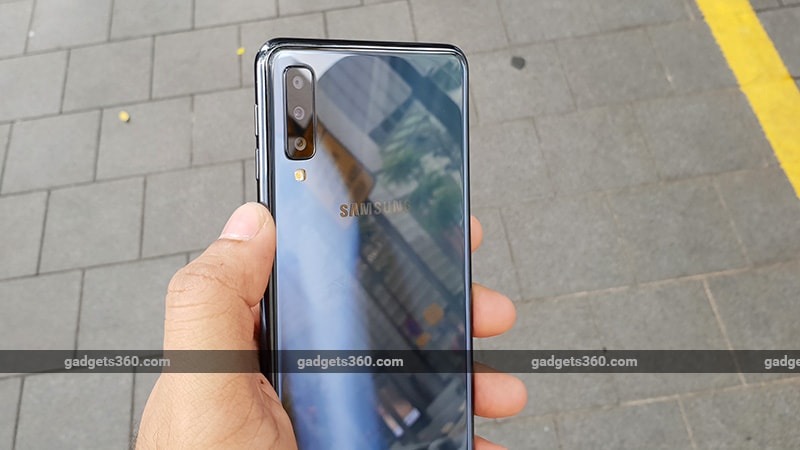 You'll find a Micro-USB port, 3.5mm headphone jack, and loudspeaker grille at the bottom of the phone, while the top only has a secondary microphone. Considering the price of this smartphone, we were expecting a USB Type-C port. The power button has an integrated fingerprint scanner and is positioned on the right, along with the volume buttons. We have seen a similar fingerprint scanner on the Samsung Galaxy J6+ (Review). This is convenient when the phone is in your right hand, but you may have to shuffle it a little in your left hand to get a proper scan.

The phone weighs 168g which is about right for a phone of this size. At the back, it has a vertically stacked triple camera module along with an LED flash. The camera module juts out slightly and has a metal rim around it to keep it safe. We observed discolouration on this metal rim after using the smartphone for a few days. As we know, glass picks up smudges quickly, and the back of the Galaxy A7 (2018) isn't an exception. You will have to wipe it frequently to keep it smudge free.

Samsung Galaxy A7 (2018) specifications and software

Samsung has used a 6-inch Super Amoled FHD+ panel on the Galaxy A7 (2018). It has punchy colours and good viewing angles, and is also has great visibility when outdoors. You also get options to tweak the colour output to suit your preference. We liked the display and enjoyed watching videos on it. The phone also has support for Dolby Atmos, but only when using headphones, not the loudspeaker. There is a noticeable difference when Dolby Atmos is switched on, and you do get the option to adjust the audio output.

Both variants also have a non-removable 3300mAh battery, Bluetooth 5, dual-band Wi-Fi 802.11ac, GPS, Glonass, and Beidou. The Galaxy A7 (2018) misses out on NFC, and as a result, it only supports Samsung Pay Mini. It has other sensors such as an accelerometer, gyroscope, proximity sensor, and ambient light sensor. The Galaxy A7 (2018) is a dual-SIM smartphone with support for 4G and VoLTE on both SIMs. 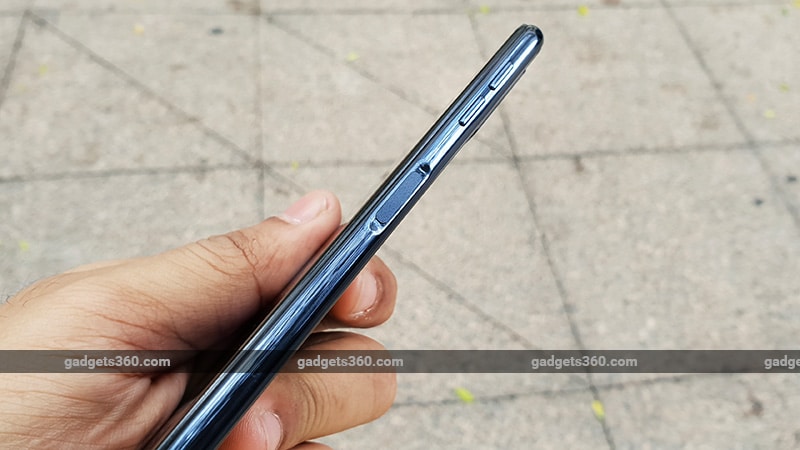 Side-mounted fingerprint scanner on the Galaxy A7 (2018)

Samsung ships the Galaxy A7 (2018) with Android 8.0 Oreo with its custom Experience UI and our device was running the September 2018 security patch. There are a few customisations and you get quite a few apps preinstalled. Samsung’s virtual assistant Bixby is also available on this smartphone. You don’t get a dedicated button for it as we have seen on the Galaxy A9 (2018), but you can swipe right from the home screen to access it. The Settings app is slightly different than what you’d see on stock Android. That said, we did not have trouble finding certain settings, and the search function within the app is helpful. The smartphone also makes the most of its Amoled display with an Always-On mode that displays the time and pending notifications on the phone screen when it’s idle.

Some of the preinstalled apps on the Galaxy A7 (2018) include Google and Microsoft Office apps, Amazon Shopping, Prime Video, Dailyhunt, Samsung Mall, Samsung Max (a data saving app), Samsung Pay Mini, and My Galaxy. We found the My Galaxy app a little spammy as it kept sending push notifications. Popular Samsung features such as S Bike Mode, S Power Planning, and S Secure are not preinstalled on the smartphone but you can download them from the Google Play Store.

Another addition called Game Tools helps you block incoming notifications, boost performance, and disable automatic brightness adjustment when a game is launched. Game Tools also has a nifty feature that lets you use other apps in picture-in-picture mode.

Dual Messenger is similar to the Dual Apps functionality on other smartphones, and lets you run two instances of the same app on the phone. Samsung’s Smart Stay feature, which keeps the display awake when you are looking at it, as well as the palm swipe gesture to capture a screenshot, are useful. Another feature called Chat Over Video, which was introduced with the Galaxy J-series and A-series earlier this year, lets you open SMS or WhatsApp conversations in a transparent layer over a running video. You can also swipe down on the fingerprint scanner to pull down the notification shade, which is easy to do when holding the phone in your right hand.

The Exynos processor powering the Galaxy A7 (2018) isn’t a slowcoach by any means. The octa-core SoC is powerful enough to let you navigate through the phone’s UI without any lag or stutter. We could also multitask between multiple apps without any slowdowns. The fingerprint scanner is quick to unlock the smartphone once you get a proper scan. We also used the face unlock feature which was fairly quick.

We ran a few benchmarks to gauge the performance of the Galaxy A7 (2018). In AnTuTu, the phone managed to score 119,786 points. It scored 1,525 and 4,369 in Geekbench’s single-core and multi-core tests respectively. It scored 29fps in GFXBench’s T-Rex test and 9.4fps in the Manhattan 3.1 test. These benchmarks scores are in the same range as those of the Nokia 5.1 Plus (Review) which is powered by the MediaTek Helio P60, and the Motorola One Power (Review) which sports the Qualcomm Snapdragon 636 processor. Both these phones are priced under Rs. 15,000. We also found that the Xiaomi Mi A2 (Review) and the Poco F1 (Review), which cost slightly less than the Samsung Galaxy A7 (2018), score higher in these tests.

We played PUBG on the Galaxy A7 (2018) and it recommended the medium graphics preset. We did observe occasional lag while playing, and the device did get warm to the touch after 30 minutes. The loudspeaker at the bottom is easy to muffle when holding the phone in landscape mode. 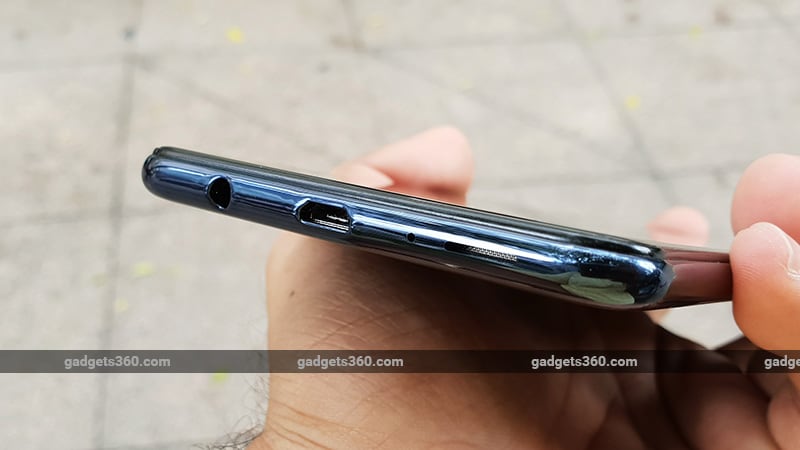 In our HD video loop test, the Galaxy A7 (2018) managed to run for 15 hours and 40 minutes. With our regular use consisting of an active WhatsApp account, a couple of calls, an hour of navigation using Google Maps, and a few games, we got through a full day on a single charge.

Let’s address the highlight of the Galaxy A7 (2018) now, the triple camera setup. It consists of a 24-megapixel primary camera with an f/1.7 aperture, a 5-megapixel depth sensor with an f/2.2 aperture, and an 8-megapixel sensor with an ultra-wide lens and f/2.4 aperture. The camera app has Panorama, Pro, Beauty, Live Focus, Slow Motion, AR Emoji, and Hyperlapse modes. The camera is set to Auto by default and it also has a Scene Optimiser function that can detect 19 different scenarios and set the camera up accordingly.

In the viewfinder, you get shortcuts for Bixby Vision and Quick Share, which lets you send photos to apps like Facebook and Facebook Messenger right from the camera app. There are controls for the flash, filters, and camera switcher. A quick HDR toggle is missed here, and you’ll need to go into the settings to control it. You also get a button which quickly lets you switch between the primary camera and the wide-angle one. This gives you a wider field of view. 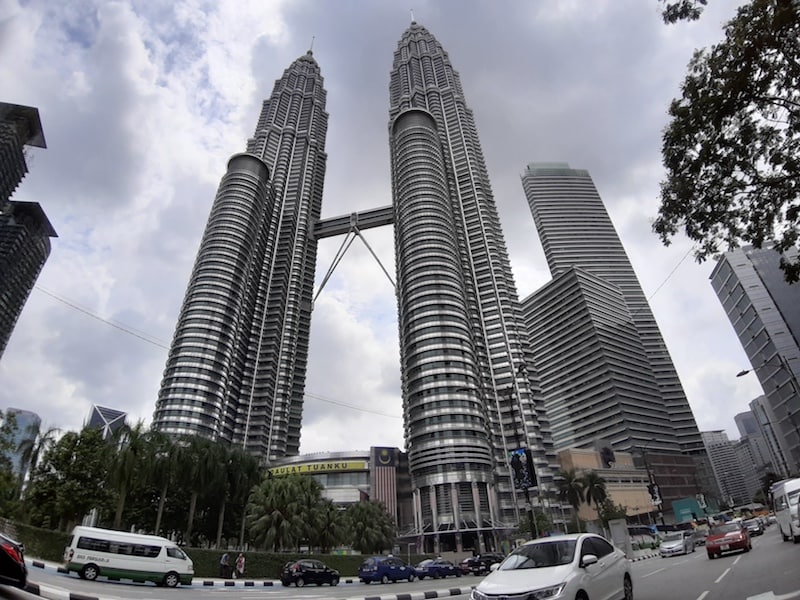 The primary 24-megapixel camera manages good photos in daylight. The phone is quick to set exposure and even toggle HDR automatically if the scene requires it. In favourable light, it captured good details. It also manages to preserve the details of objects at a distance.

The phone is quick to focus on tiny objects when shooting macros, and manages to create good separation between the subject and the background. Macros taken outdoors in daylight were sharp, but those shot indoors didn’t have the same level of sharpness. 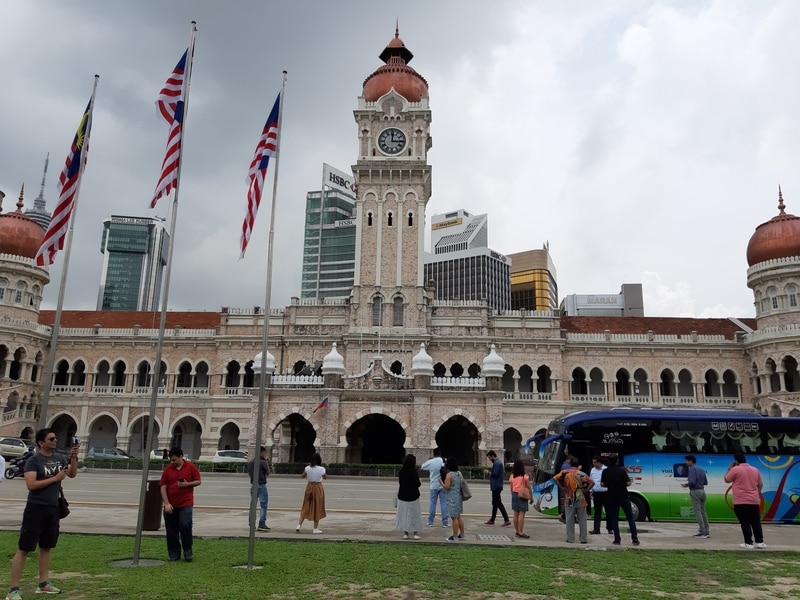 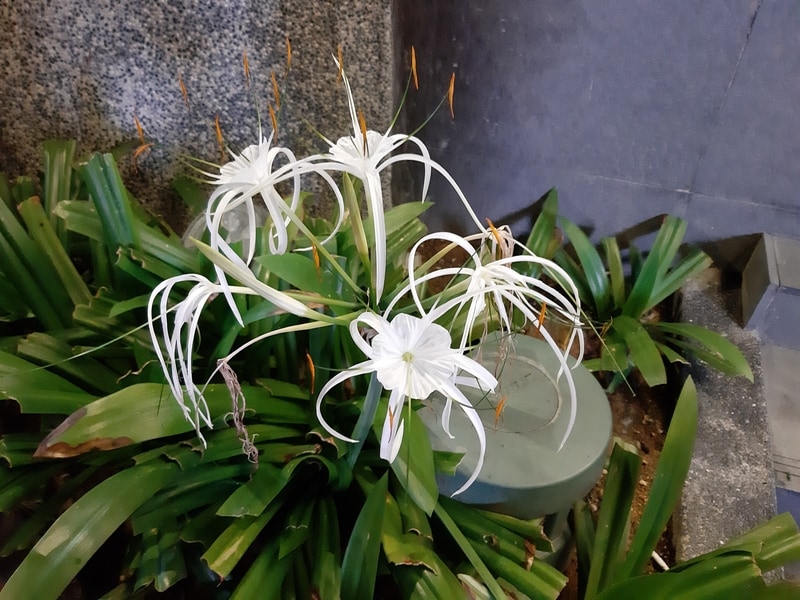 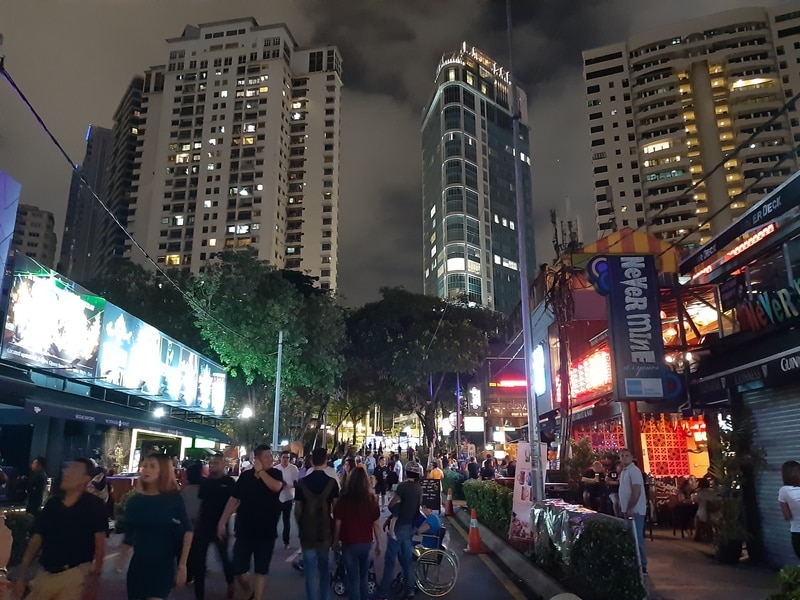 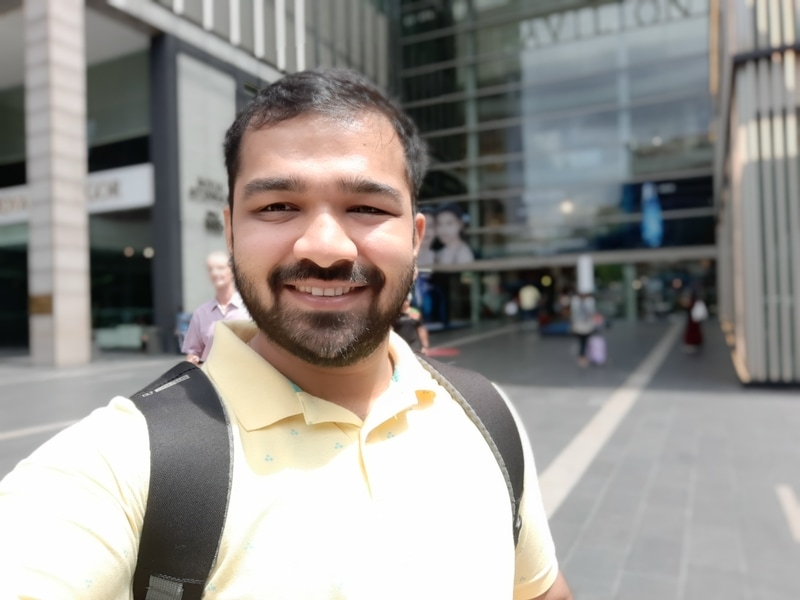 Samsung’s Scene Optimiser is useful and does make a noticeable difference to the output. However, you’ll need to switch to that mode from Auto every time you launch the camera app. We feel that Samsung could have merged Scene Optimiser into the Auto mode to make it easier to use.

In low light, we were expecting the pixel binning feature on the Galaxy A7 (2018) to help deliver good photos. The output appears good, but you will notice a loss of detail after zooming in. The smartphone uses aggressive noise reduction, which leaves a watercolour effect on the output.

Selfies are quite detailed and can be shared on social media apps. The beautification mode kicks in automatically and you will have to switch it off manually if you want natural output. Automatic HDR is also available for selfies. The phone also has a handy selfie fill light. Video recording maxes out at 1080p for the primary and the selfie cameras. When shooting with the primary camera, we found that the output was well stabilised.

Verdict
The Galaxy A7 (2018) is the first Galaxy smartphone with a triple camera setup, and the different sensors do help you to get better shots in different situations. Despite the comparatively small 3300mAh battery, this phone manages to deliver good battery life thanks to its efficient processor. The glass back gives it a premium feel. We aren’t a hundred percent convinced about the side-mounted fingerprint scanner, as it wasn’t convenient when using the phone in the left hand.

Priced at Rs. 23,990, the Galaxy A7 (2018) is a decent package for the price. If you take a lot of photos, the wide angle sensor will come in handy. However, we would like Samsung to improve low light performance, and hopefully this is something that the can be done via a software update.

If you are looking for a phone with versatile cameras then the Galaxy A7 (2018) is worth considering for the price. But if you want a more powerful processor, you could instead consider the Poco F1 and the Vivo V11 Pro (Review), which are available at roughly the same price.