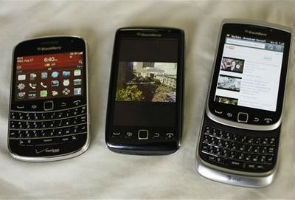 Highlights
Well before the iPhone, BlackBerry gained its "CrackBerry" nickname for its seemingly vital place in users' lives. Lately, however, the surging popularity of Apple's gadget and smartphones running Google's Android software has made the BlackBerry seem less habit-forming.

In response, Research In Motion Ltd. is trying to spice up its product line by releasing several BlackBerrys with touch screens and new software for better performance. In a first for the BlackBerry, a few can run on super-fast "4G" cellular networks, which wireless providers are rolling out.

The phones will be available from the major providers over the next several weeks at a wide range of prices - $50 to $300, with two-year service contracts.

I checked out three: A new version of the high-end Bold, now sporting a touch screen, and two new Torch models, one keeping the slide-out keyboard from before, and the other ditching the physical keyboard.

There are some good features here that will appeal to BlackBerry fans. But chances are many are waiting for devices that run the more advanced QNX software used in RIM's PlayBook tablet computer, which could be coming fairly soon.

Newcomers, meanwhile, are likely to find the new smartphones too boring-looking on the low end and expensive on the high end.

The phones adhere largely to the familiar BlackBerry aesthetic, but with a few twists. They all have the latest version of RIM's operating software, BlackBerry 7. Although it appears quite similar to previous versions, BlackBerry 7 promises a zippier Web browser, voice search and better rendering of graphics.

The most noticeable change was the improved Web-surfing speed. I connected an old BlackBerry Torch with BlackBerry 6 and the new Torch 9810 with version 7 to the same Wi-Fi network. Generally, the new Torch rendered photos and text more quickly. I did notice, though, that at least with The New York Times' website, the older Torch would load entire articles on a single page while the newer phone only gave me the first chunk and forced me to click for the rest.

Also new is voice-activated universal search, which sounds good in theory but was pretty disappointing in practice.

The first step made sense: I tapped an on-screen button to get the voice software to start "listening." But when I was done I had to press another button to tell it I was finished. After a delay to process my request, the phone gave me some options, such as dialing a friend's number, searching for a profile on Facebook or doing a more general search on Microsoft's Bing. I'd have to tap some more to check the options out.

All this screen-touching defeated the purpose of voice search, which should be a largely hands-free endeavor. The feature looks even more dismal when compared with Google's voice search, which can reliably determine when you're done speaking and understands commands for tasks such as calling a friend. It's better than the BlackBerry at figuring out what I'm trying to do, without needing tons of taps to confirm.

Another problem is the lack of apps. The BlackBerry App World includes more than 40,000 apps - a smidgen of the more than 250,000 apps available in Google's Android Market and 425,000 apps available from Apple's App Store. And many of those 40,000 have yet to be updated for BlackBerry 7 phones. I couldn't get one for the review site Yelp when I checked the other day.

The phones all include standard BlackBerry features such as its secure handling of work email and an updated version of the BlackBerry Messenger program. Despite speedy processors and new graphics technology, they sometimes lagged behind when I opened applications.

Each new BlackBerry is equipped with a 5-megapixel camera with a bright flash and plenty of built-in settings for taking different kinds of shots. The cameras can take high-definition videos, too.

The photos I took were reasonably good and the camera performed pretty well in low light, but colors often didn't seem as vibrant as they could be.

Despite having by far the smallest screen of the bunch (2.8 inches diagonally), the new Bold merges form and function well. The handset is RIM's skinniest thus far, and it looks like a better-quality handset than the other new releases. I also found its keyboard easiest to use among the three I tested.

The Bold is RIM's first to include an NFC, or near-field communication, chip, which could eventually allow the phone to work as a sort of wireless payment system.

Too bad the phone is so expensive. Sprint will start selling the Bold 9930 on Sunday for $250, while Verizon is hawking it online now for the same price. The Bold 9900, which can work on T-Mobile's high-speed 4G network, will be available Aug. 31 for an even steeper $300 (after a $50 mail-in rebate). You'll need a two-year contract to get any of these prices.

RIM, a master of the physical keyboard, hasn't had much luck with phones that only include a touch screen. Its early attempts with the BlackBerry Storm were dismal. Although the keyboard-free Torch 9850 looks sleeker, I had a hard time typing, as I kept hitting the wrong letters and numbers.

The phone also seemed to lag behind, spitting out letters well after I'd typed them and not noticing that I was stabbing feverishly at the browser's address bar in an attempt to visit another webpage.

The Torch 9850 will be available Sunday from Sprint for $150 with a two-year contract.

This phone is definitely the least attractive of the group, but it gets points for its ability to access AT&T's high-speed 4G data network, which makes it quick to download documents or upload photos to Facebook.

The Torch 9810 weighs in at a hefty 5.7 ounces, and its design, which is essentially identical to a previous Torch, looks tired compared with many other smartphones.

Its slide-out keyboard is more cramped than that on the Bold, yet it is still quite good for typing.

What the handset lacks in pizazz it makes up for in price: When AT&T starts selling it on Sunday, it will cost just $50 with a two-year contract.

All of the latest BlackBerrys add several good features, but RIM is still far behind the competition in ease of use and availability of apps.

There will surely be demand from business users whose employers demand BlackBerrys because of their reputation for security. Still, it's hard to imagine them wooing many consumers unless they're already die-hard CrackBerry addicts.
Comments