Xiaomi Redmi Y3 has a starting price in India of Rs. 9,999 and will be available in three colours

Xiaomi has lifted the covers off the Redmi 7 and the Redmi Y3. While the Redmi 7 lays claim to the title of the best budget all-rounder, the Redmi Y3 is intended to cater to photography enthusiasts. Just like the Redmi 7, Xiaomi has given the Redmi Y3 a major design and hardware upgrade compared to its predecessor. This phone also boasts of some neat software tricks to enhance photos, with a special focus on selfies. Xiaomi has priced the Redmi Y3 starting at Rs. 9,999 in India. The successor to the Redmi Y2 has a different take on gradient designs, and packs some impressive imaging hardware for its price. We spent some time with Xiaomi's latest Y-series offering at the launch event, and here are our initial impressions.

The Redmi Y3 is a stark departure from its predecessor's svelte metallic body, as it flaunts a gradient texture with thin lines running vertically across the rear panel, somewhat similar what we saw on the Vivo V15 Pro (Review). Xiaomi claims that the finish has been achieved courtesy of a 7-layer deposition technique, and is calling this its Aura Prism design. The Redmi Y3 has been launched in Prime Black, Bold Red, and Elegant Red colour options.

The colour shifts look beautiful on the Redmi Y3 when light falls on it at different angles, but for folks who prefer an understated design, the Prime Black variant is the one for them. Appealing looks aside, the Redmi Y3 is a fingerprint magnet, and also attracts smudges and dirt rather quickly. It remains to be seen how the device will handle scuff marks, as Xiaomi has not said anything about a protective coating for the rear panel.

To protect the device from accidental liquid splashes, there is a P2i hydrophobic coating, just like on the Redmi 7. The curved rear panel makes this device feel comfortable to hold, but it is also quite slippery.

Xiaomi is trimming the bezels across its entire smartphone lineup in favour of display notches for a more immersive experience, and the Redmi Y3 is no exception. The latest Redmi Y-series model packs a 6.26-inch HD+ (720x1520 pixels) display with a 19:9 aspect ratio and a waterdrop notch — or a Dot Not, in Xiaomi's language.

The display is protected by Corning Gorilla Glass 5 and has 2.5D rounded edges. In our brief experience with this phone, we found that the display rendered punchy colours and the viewing angles were decent as well, however, we didn't have the chance to use it under sunlight.

The key highlight of the Redmi Y3 is, of course, its cameras. The front snapper has a 32-megapixel sensor; a major upgrade over the Redmi Y2. The support for EIS (Electric Image Stabilisation) in videos is a great bonus, and so is the 80-degree field of view and auto-HDR mode.

The sensor employs pixel binning i.e. it combines four pixels into a single large pixel to bring in more light. We took a few selfies at the launch event. They seemed well-lit, and objects in focus were highlighted quite well, but edge details were somewhat lacking, though we will reserve final judgement until we've had the chance to spend more time with the Redmi Y3 as part of our review process.

The rear camera setup is comprised of a 12-megapixel (f/2.2) main sensor, assisted by a 2-megapixel depth sensor. The Redmi Y3's rear cameras also support EIS and can shoot smooth full-HD videos at 60fps. Powering the device is the Qualcomm Snapdragon 632 SoC paired with up to 4GB of RAM and 64GB of internal storage.

The choice of the Snapdragon 632 SoC is not surprising, as the Redmi Y3 cuts down on the processing capabilities in exchange for more powerful cameras, compared to the Redmi Note 7 (Review) which packs the beefier Snapdragon 660 processor. Just like the Redmi 7, the Redmi Y3 has three slots to accommodate two Nano-SIM cards and a microSD card simultaneously, while a 4,000mAh battery powers the phone. 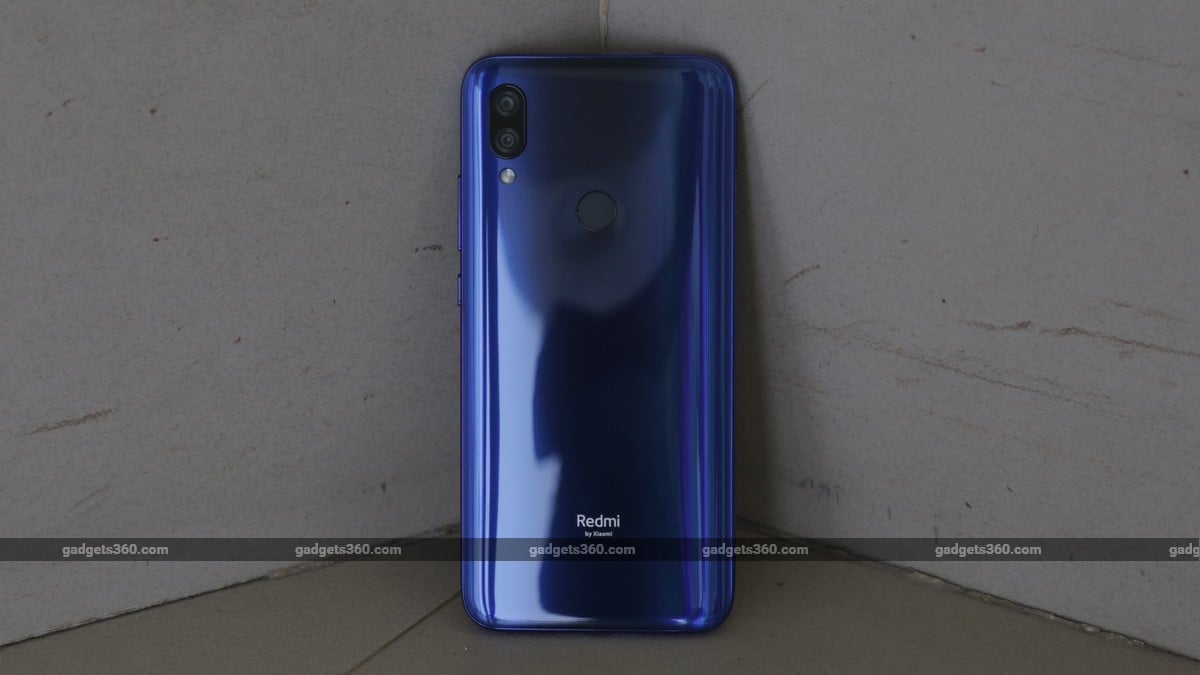 MIUI 10 based on Android Pie handles things on the software side. We tried some multitasking on the Redmi Y3 demo units and found that the phone handled itself with ease, but we'll soon test overall performance more thoroughly in our review. Another slight disappointment is the Micro-USB port on the Redmi Y3, considering the fact that the Redmi Note 7 sports a USB Type-C port at the same price point.

The equivalent pricing of the Redmi Y3 and the Redmi Note 7 (Review) will obviously confuse potential buyers, but here is the broad outline – the Redmi Y3 is targeted at folks who take a lot of photos and want them to look good, while the Redmi Note 7 is an all-rounder with more processing power.

We will soon test the Redmi Y3's camera performance, day-to-day usage, battery endurance, and other key parameters in our full review to find out whether it is worth its asking price. Stay tuned to Gadgets 360 for our Redmi Y3 review, coming up soon.

product The Redmi Y3 offers a 32-megapixel front camera with EIS, an octa-core Snapdragon 632 SoC, and a 4,000mAh battery encased in an attractive frame.