Redmi Note 9 Pro Max is big and bulky, not the best for single-handed use

Xiaomi's Redmi series devices have grown in size, to the point that the Redmi Note 9 Pro Max is bulky and unwieldy. It measures 8.8mm in thickness and weighs 209g, which makes one-handed use difficult. It's hard to reach the top of the tall 6.67-inch display without shuffling the phone in your hand. Thankfully the 20:9 aspect ratio is slim enough to manage. There is a layer of Corning Gorilla Glass 5 on the display which should help it withstand daily usage. Right above the display is a thin earpiece that also houses a white notification light.

The Redmi Note 9 Pro Max has a side-mounted fingerprint scanner embedded into the power button on the right of the phone. It is slightly recessed which makes it easy to find by touch. We weren't happy with its positioning since it is higher than where our finger rests naturally. If you are left-handed, you can set up your left index finger, which will be the most comfortable way to use this phone. We found this scanner to be quick when unlocking the Redmi Note 9 Pro Max.

Another issue we faced was the placement of the volume buttons. They are higher than this side-mounted fingerprint scanner and not convenient to reach. Sticking to Xiaomi's tradition of offering an IR emitter on its smartphones, the Redmi Note 9 Pro Max has one on the top. It also has a headphone jack on the bottom along with the USB Type-C port. 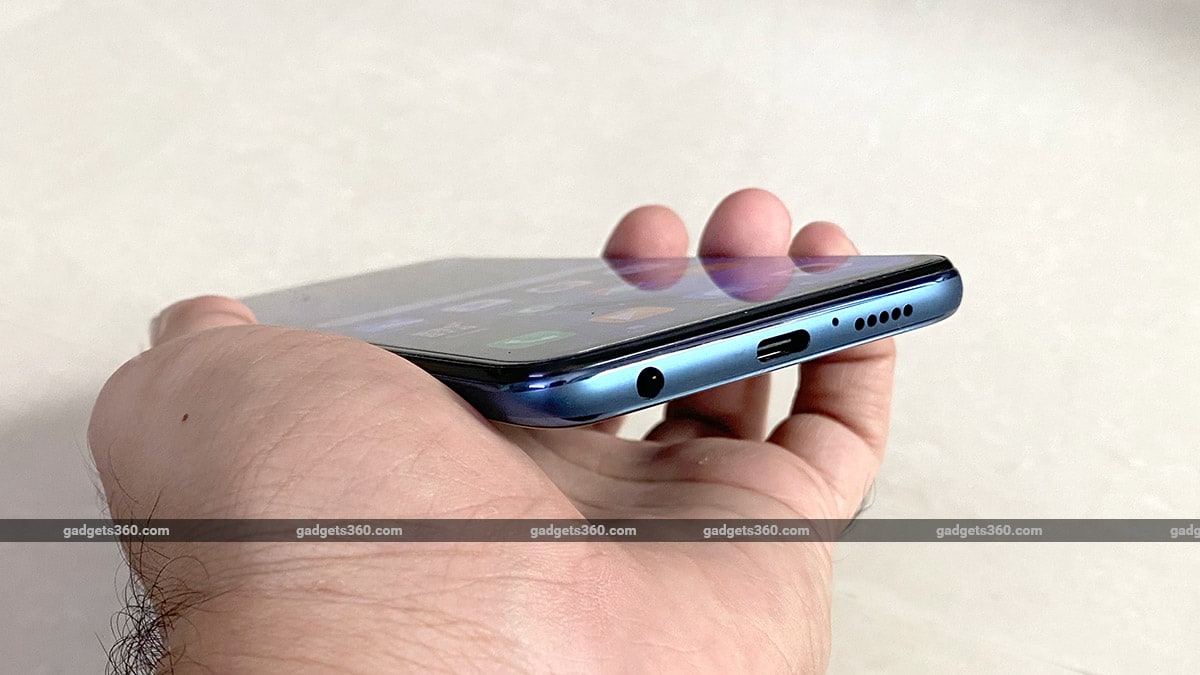 The big display on the Redmi Note 9 Pro Max is not an AMOLED panel and does not boast of a high refresh rate. Xiaomi could have done this to keep the price down, but some competitors at this price level do offer these features. It isn't a bad panel though. It has good viewing angles and is bright enough when outdoors. It does have a camera hole right in the centre towards the top, that could be distracting to some people. We got used to it while using the device and did not face any issues. 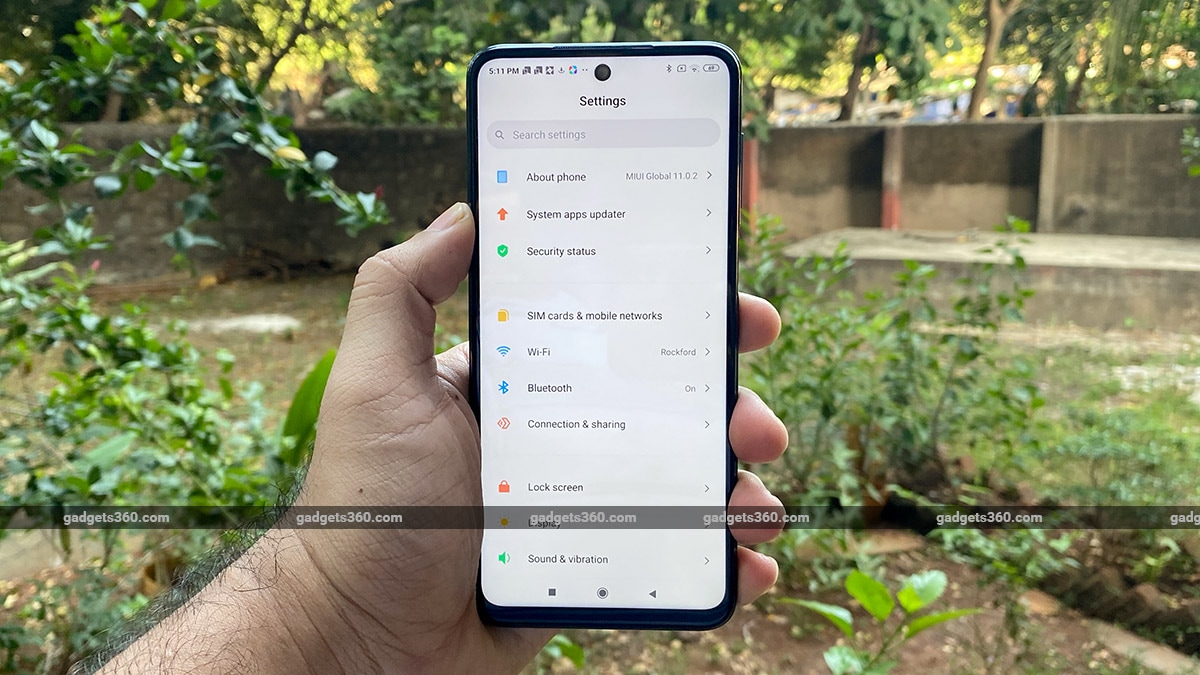 The hole-punch could be distracting for some people

One of the primary reasons for the bulk of the Redmi Note 9 Pro Max is the monstrous 5020mAh battery that it packs in. The Note 9 Pro Max is a dual-SIM smartphone with support for dual 4G VoLTE and VoWiFI, as well as Bluetooth 5 and dual-band Wi-Fi 802.11ac. It also has NavIC support along with GPS.

On the software front, it runs MIUI 11 on top of Android 10 and our unit was running the April 2020 security patch. The UI has a lot of customisation options and if you have used a Xiaomi device in the past, you'll have no issues finding your way around it. Sadly, there's too much preinstalled bloatware. That includes apps such as Helo which are known to be spammy when launched. Xiaomi's stock apps can also get annoying at times, and we were bombarded with notifications by an app store called Get Apps. Xiaomi's wallpaper carousel also kept pushing notifications, which we consider unacceptable.

While setting a new device up we tend to rush through the installation process to get it over with, but you will need to pay attention while setting this device up as a couple of options and apps are checked by default. This will save you from some unnecessary spam after setting the device up.

With key specifications shared between the Redmi Note 9 Pro and the Max model, the performance of the two doesn't feel any different. The Redmi Note 9 Pro Max can handle day-to-day tasks with ease and will never make you wait for long as it loads apps. We faced no issues while scrolling through menus or multitasking. It does not have a high screen refresh rate like the Poco X2 (Review) and the Realme 6 Pro (Review), so it does not feel as smooth as those devices, but this isn't a deal-breaker.

The Redmi Note 9 Pro Max managed to score 2,77,058 in the AnTuTu benchmark which is little lower than the 2,82,159 scored by the Realme 6 Pro, but this difference isn't big enough to impact real-world performance. In Geekbench 5's single-core and multi-core tests, the Redmi Note 9 Pro Max managed 564 and 1,759 respectively. Using graphics benchmark GFXBench, it managed 16fps in the Car Chase scene and 27fps in Manhattan 3.1 which is identical to what the Realme 6 Pro scored.

Gaming is handled well and the Redmi Note 9 Pro Max managed to keep load times down. When playing PUBG Mobile it defaults to the High settings. We could play the game without any stutter, but the phone did get warm to the touch after 20 minutes. While the big display is not great for single-handed use, it is very helpful while gaming and watching videos. 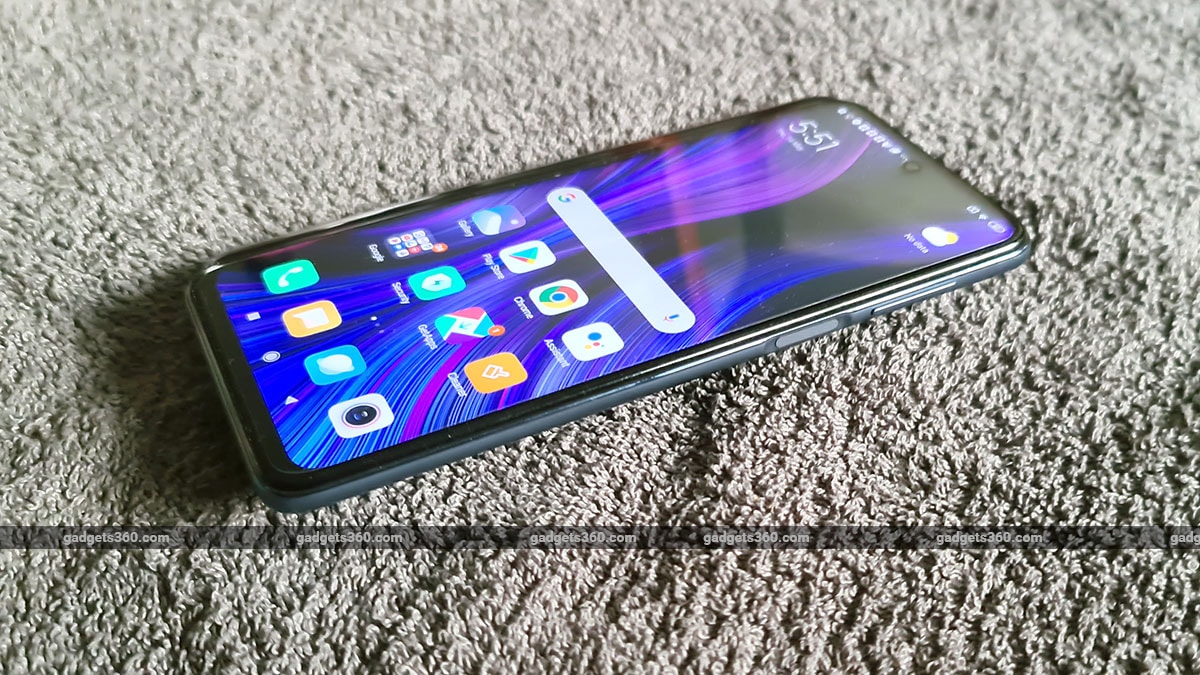 We spent quite some time watching videos on the Redmi Note 9 Pro Max and the battery did fare well. With our usage, the smartphone easily went beyond a day and a half before needing to be charged. In our HD video loop test, it lasted us for 17 hours and 10 minutes, which is a good score, but the Realme 6 Pro managed 21 hours which gives it an edge compared to the Redmi Note 9 Pro Max.

When the battery does run out, you can use the supplied 33W charger. This takes the phone from zero to 52 percent in 30 minutes. The device does get hot when charging rapidly. Charging slows down after around the 75 percent mark, and the device gets to 90 percent in an hour. The more affordable Redmi Note 9 Pro can only be charged at up to 18W, so this is an advantage for the premium model

Now we come to the main thing that helps distinguish the Max model from the Pro model, the cameras. The Redmi Note 9 Pro Max has a 64-megapixel primary sensor with an f/1.89 aperture. The other ones are an 8-megapixel ultra-wide-angle camera with a 119-degree field-of-view, a 5-megapixel macro camera, and a 2-megapixel depth sensor. The macro camera has got a bump up in terms of resolution compared to other phones at this price.

The camera app is feature-packed and has a lot of shooting modes to choose from. The photo mode captures 16-megapixel pixel-binned shots using the 64-megapixel sensor by default. You can also shoot at the full 64-megapixel resolution if you need to. There is a Pro Colour mode that bumps the contrast up in photos, and reminds us of the Dazzle Color and Chroma Boost filters on Oppo and Realme smartphones respectively.

There's a short video feature that restricts clips to 15 seconds and offers a kaleidoscope effect. This is mainly targeted at Instagrammers and TikTokers. Slow Motion video recording is also possible and you can choose between 120fps, 240fps and 960fps. The Macro camera toggle is placed in a sub-menu and might be hard for some people to find.

Daylight shots taken with the Redmi Note 9 Pro Max turned out quite well. We took some shots with a bright sky in the background, and the smartphone enabled HDR automatically. Photos look like they have been sharpened which might not appeal to everyone. If you zoom into an image you will notice that the details are good but there is some grain in the shadows. 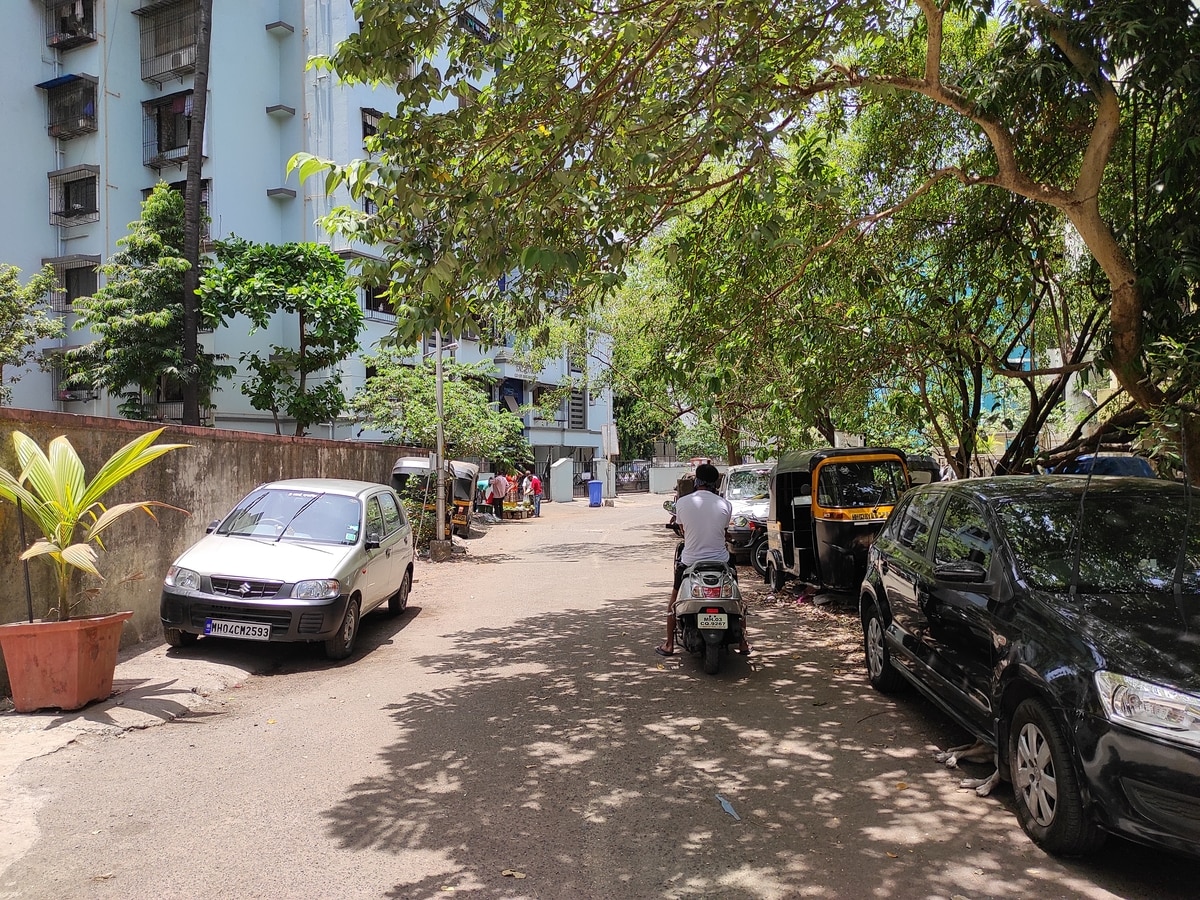 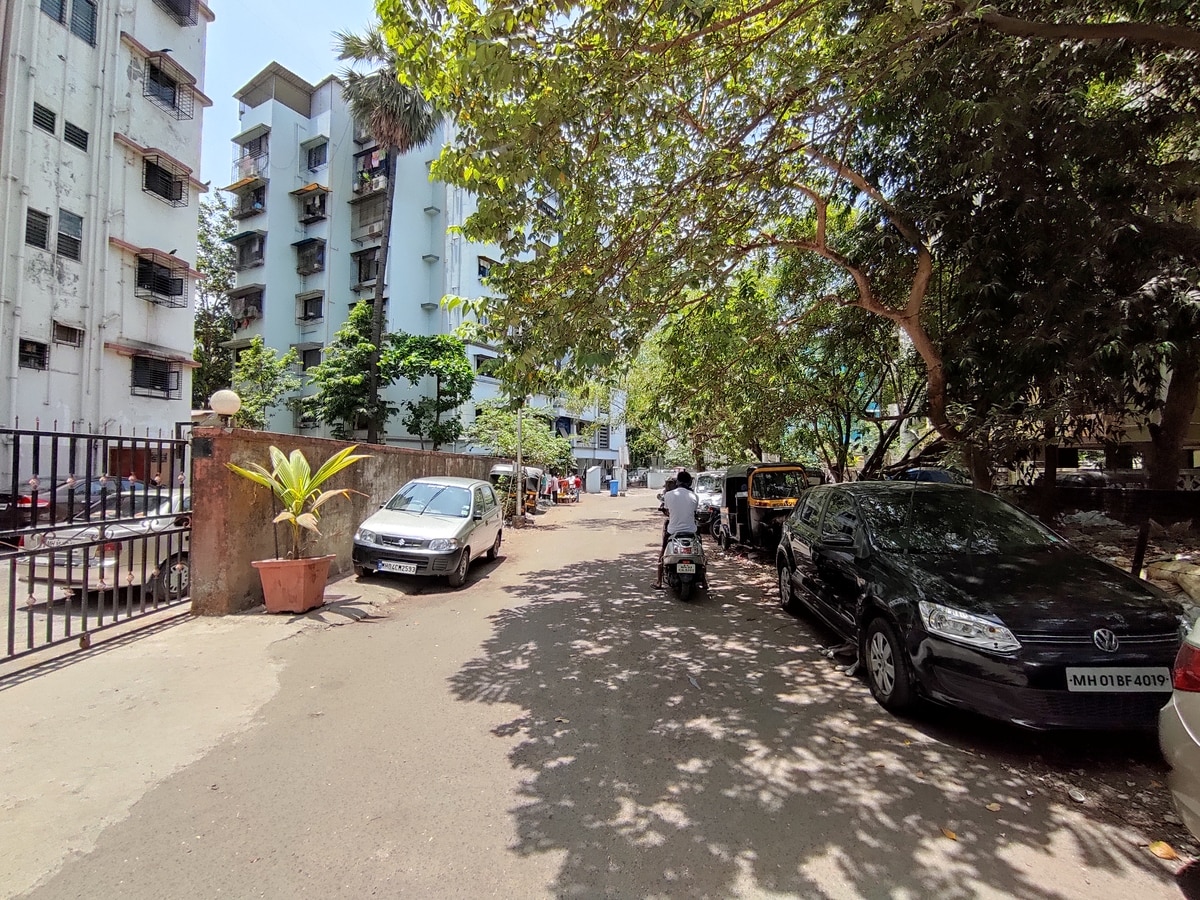 For close-ups, the AI can recognise the subject and set the camera up accordingly. The phone manages a soft bokeh effect while shooting subjects, which helps them stand out. We had to try more than once to get the Redmi Note 9 Pro Max to focus where we wanted but the resulting image was nice and sharp. We also used the Pro Colour feature which slightly bumped the contrast up in the output. 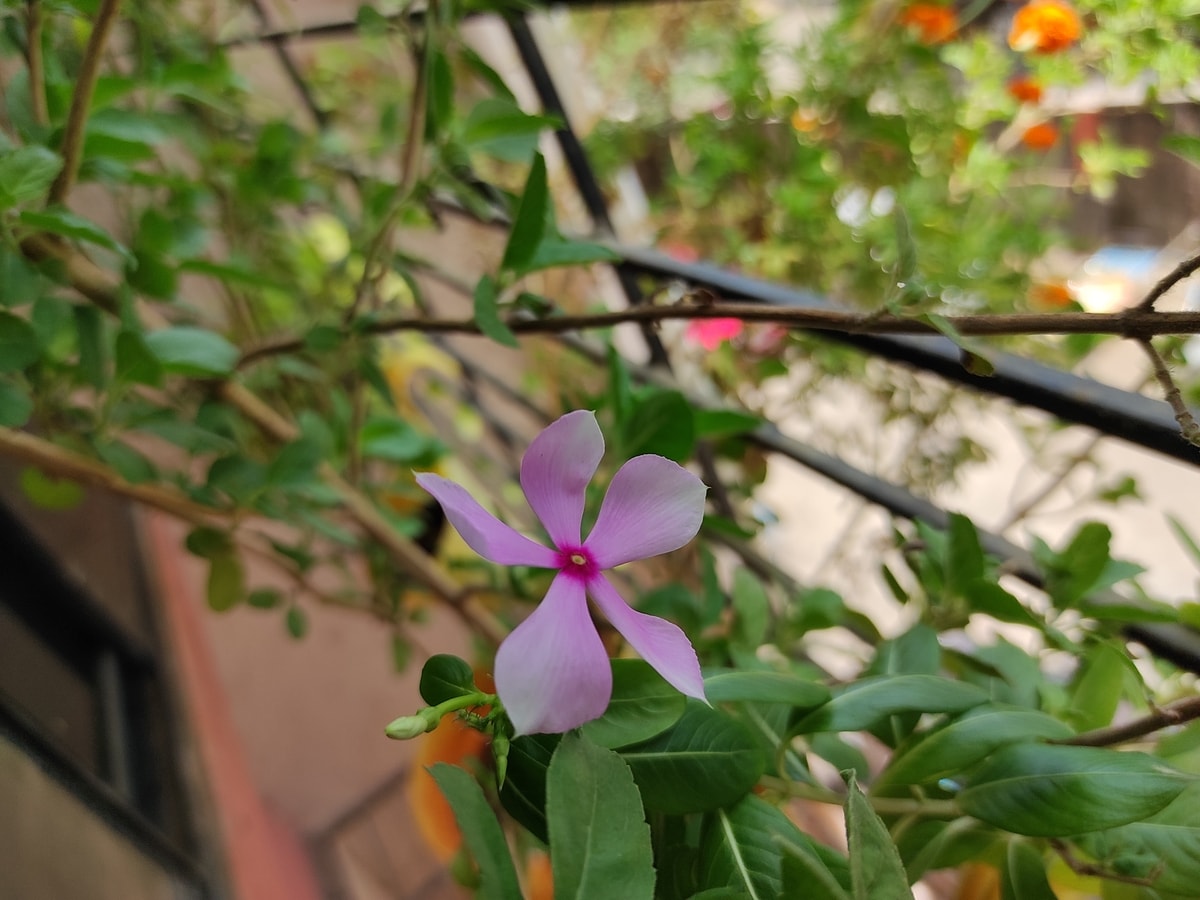 The wide-angle camera on the device offers a wider field of view but there is a considerable drop in the level of detail. Xiaomi has implemented wide-angle correction which prevents barrel distortion in the output, a neat touch.

We found the macro camera to be good for extreme close-ups as it has a 2cm focus distance. It does capture very good details as long as you have enough light hitting the subject. The resolution is also higher at 5-megapixels than what you usually get from other smartphones. 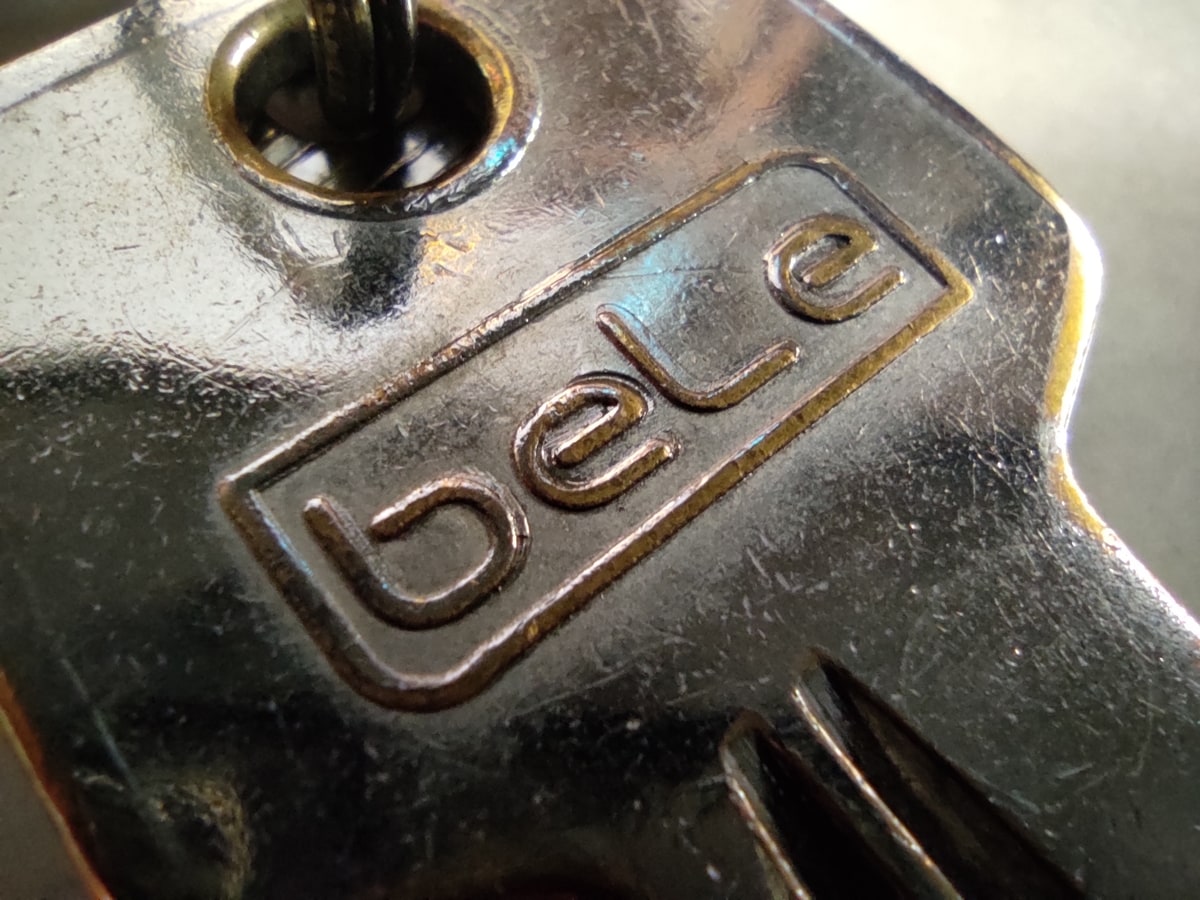 Portrait mode showed good edge detection and the phone could distinguish between a subject and the background. However, it couldn't detect the gap between a person's arm and body, and missed out on blurring this area. 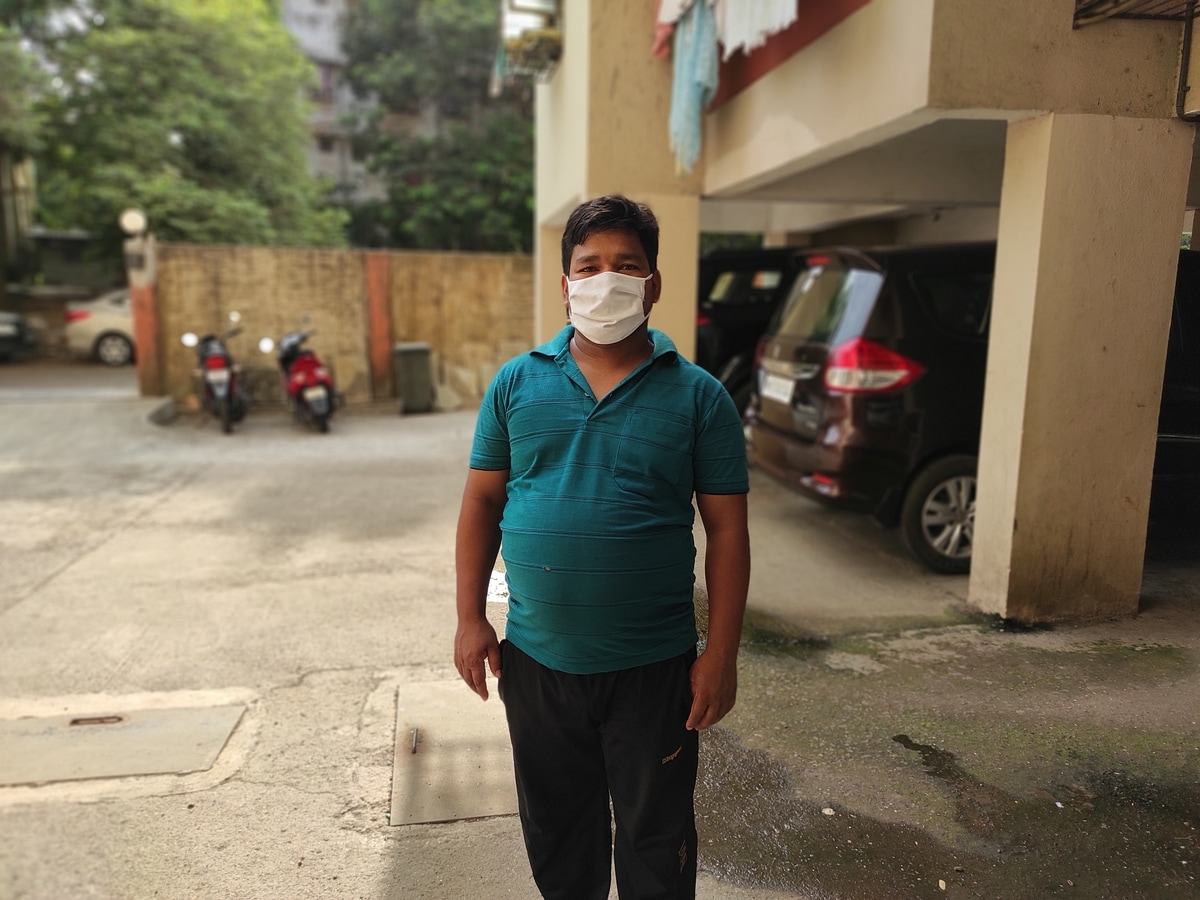 The Redmi Note 9 Pro Max can detect low light and make corrections using AI. When shooting in the regular mode we noticed that the phone managed to keep noise under control. This came at the cost of detail though, which was visible on zooming in. With Night Mode enabled, the phone combines multiple exposures. The output is sharper, with much better detail, and objects in the shadows are more visible. 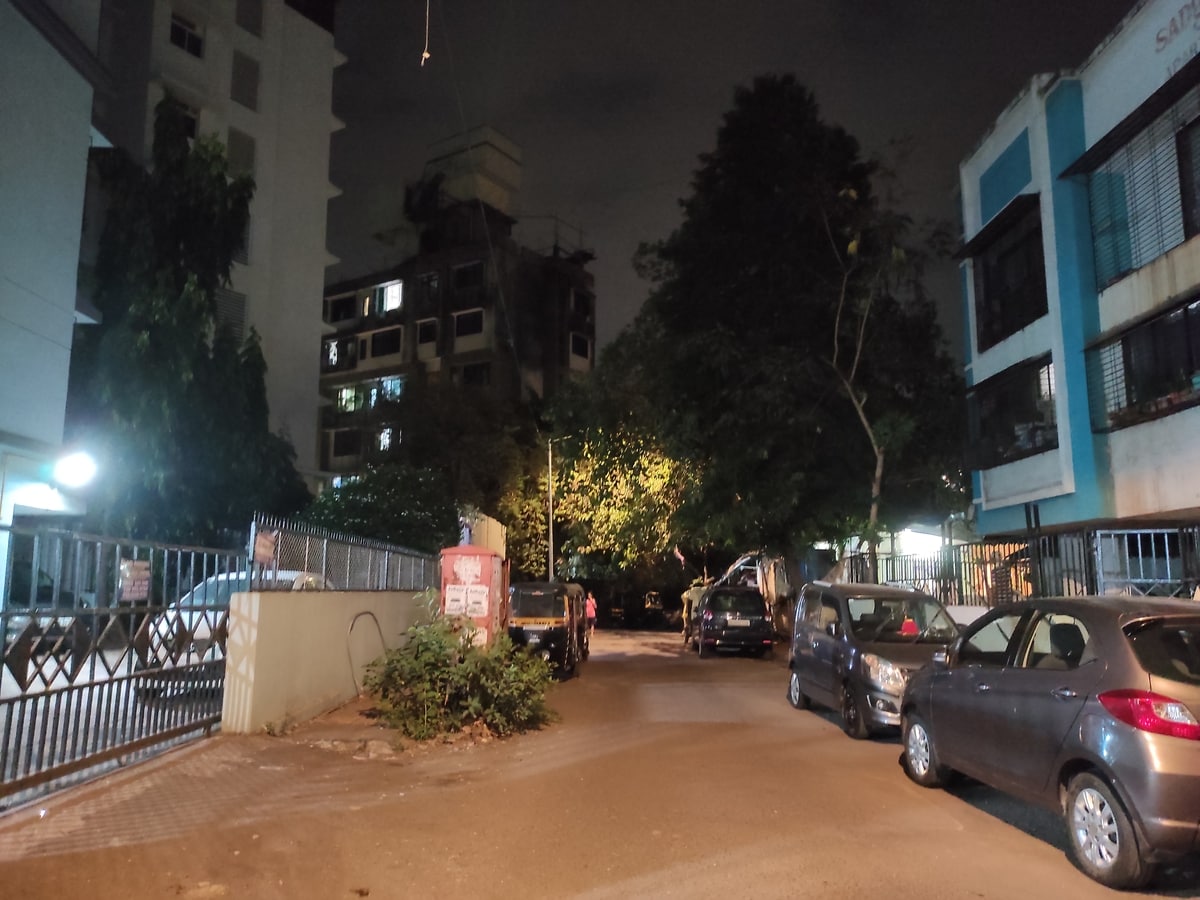 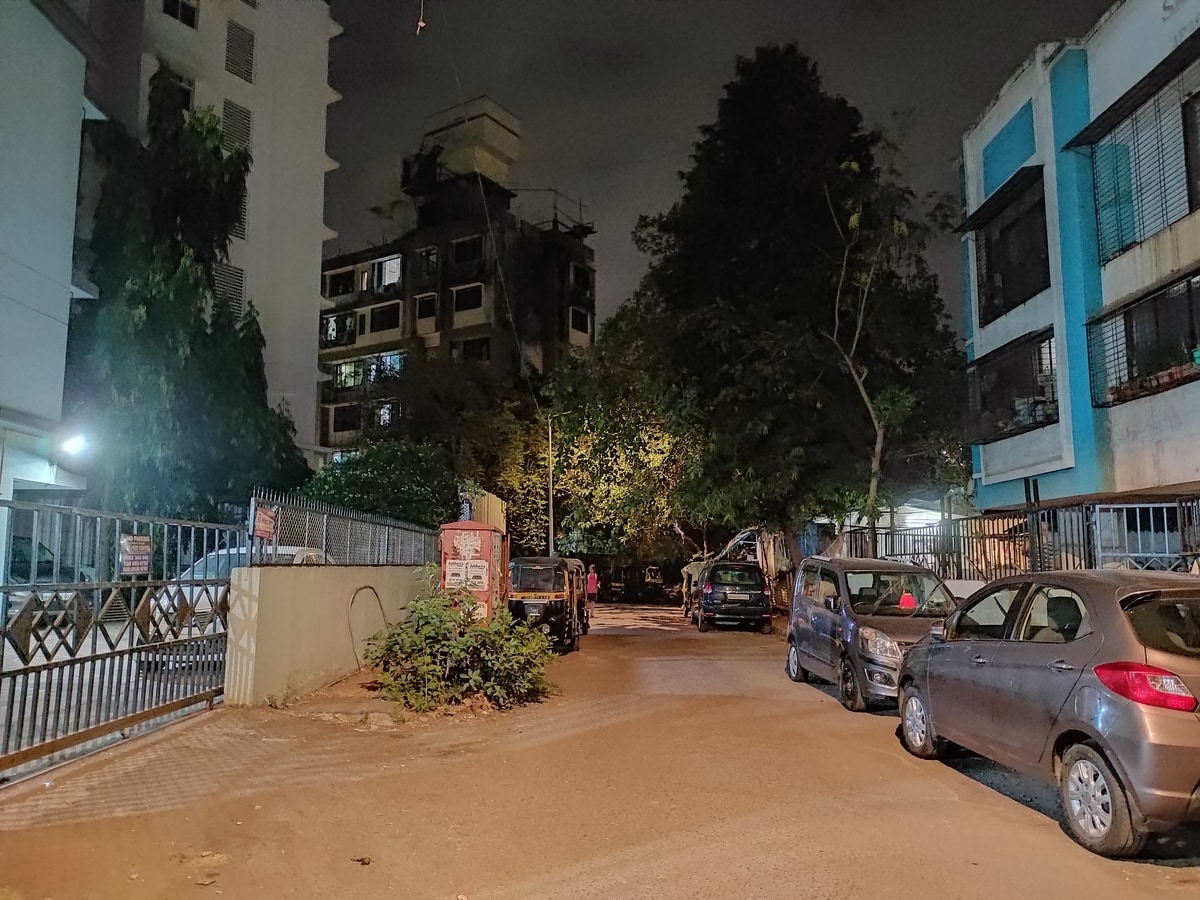 We were curious to see if the 32-megapixel selfie shooter gives this device a significant edge over the Redmi Note 9 Pro. In daylight, you get sharp selfies but they are smoothened as beautification is enabled by default. You can disable this effect if you aren't fond of it. There is a portrait mode for the selfie camera as well, and it does manage to accurately separate the background from the subject. In low light, there is a drop in camera performance and the output has fine visible grain on zooming in. 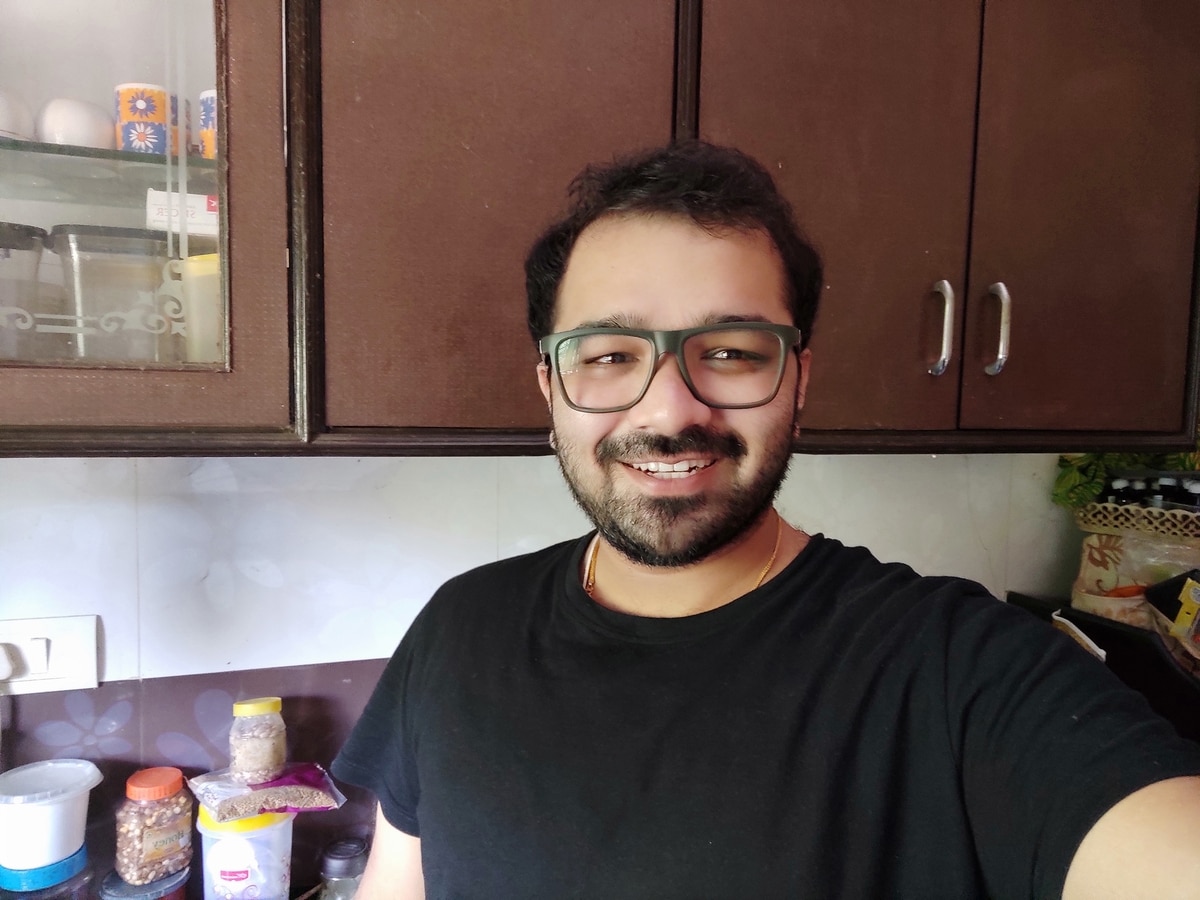 However, if you are willing to spend, the Redmi Note 9 Pro Max is the better pick. Comparable variants of the Redmi Note 9 Pro and the Max model have a difference of just Rs. 1,000 for which you get higher resolution cameras and faster charging, making it very easy to choose between the two. The Realme 6 Pro (Review) and the Poco X2 (Review) are other suitable alternatives at around the same price.

Further reading: Xiaomi, Redmi, Redmi Note 9 Pro Max
Aditya Shenoy Email Aditya Aditya Shenoy writes reviews smartphones, wearables, headphones and speakers for Gadgets 360, out of Mumbai. Aditya is a reviewer for Gadgets 360 and has written extensively about smartphones, software updates, and upcoming devices. Aditya is available on Twitter at @adishenoy, and you can mail him at adityashenoy@ndtv.com, so please send in your leads and tips. More
Bill Gates, Bogeyman of Coronavirus Conspiracy Theorists
Realme Watch Teasers Reveal 1.4-Inch Display, Activity Tracking Features Ahead of May 25 Launch