Redmi Go, Xiaomi's most affordable smartphone till date, goes on sale for the first time in India on Friday. Redmi Go's specifications include a 5-inch touchscreen display with a 720x1280 resolution, a Qualcomm Snapdragon 425 SoC, and 1GB of RAM. It runs Android 8.1 Oreo (Go Edition) and has a 3,000mAh battery. While Xiaomi is no stranger to the budget smartphone space, and while our Redmi Go review is coming soon, ahead of that we wondered how far Rs. 4,499 would go in terms of gaming performance.

For this story, we avoided the usual casual smartphone games like Candy Crush, Subway Surfer, and Clash of Clans. Reason being, they're designed to run on almost any smartphone. Instead we focused on popular graphics intensive games as they would probably be the most intensive workout of what the Redmi Go has to offer. Here's what we found out.

Yes, you read right. We were able to download PUBG from the Play Store and install it on our Redmi Go unit, but opening it showed off an error message saying it's not supported. A quick check of the PUBG Mobile specifications state that a minimum of 2GB RAM is needed, making the 1GB RAM on the Redmi Go a non-starter.

PUBG Mobile Lite may be a decent substitute if you can get it running as it works on devices with 1GB RAM. However it' s currently available in the Philippines alone and despite using a VPN, spoofing our location, and changing the DNS, we couldn't get it to work. Hopefully, PUBG Mobile Lite releases officially here though there's no India release date yet.

That said, we were able to play Knives Out and Rules of Survival though the experience was anything but playable, with both games frequently lagging and crashing. They were far from smooth on the Redmi Go, which wasn't too big a surprise given the modest specifications.

It's not all bad news though. If you're looking to play a realistic looking battle royale game in the mould of PUBG on the Redmi Go, you may want to consider Free Fire. From running into cover to dropping onto its sprawling map or simply aiming in first-person, Free Fire on the Redmi Go was a fun experience.

Granted we had to use the lowest graphical settings, which should come as no surprise given this phone's target market (first-time smartphone buyers) and price, but it's a game that ran fine on the Redmi Go with no crashes or lag all while looking serviceable on its 5-inch display. 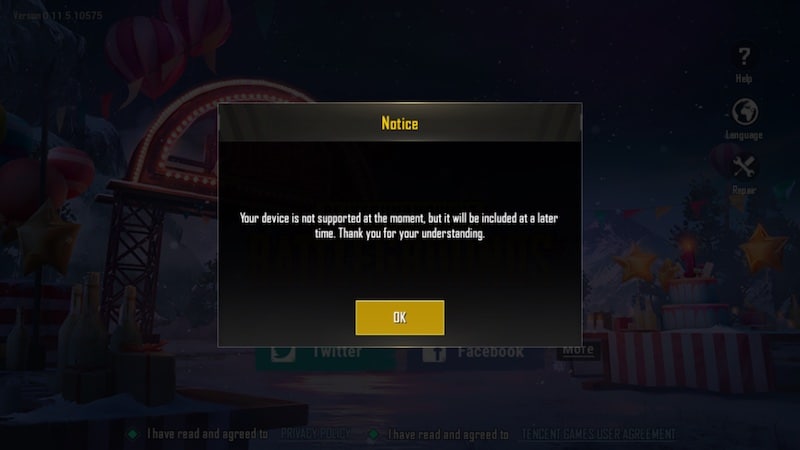 Asphalt 8 and Arena of Valor on the Redmi Go

Next up we tried to play Asphalt 9. The latest entry in Gameloft's long-running racing series isn't available for download for the Redmi Go via the Google Play Store. So we tried the next best thing — Asphalt 8. Using the highest graphics quality option resulted in a surprisingly playable experience while dropping to the medium preset made Asphalt 8 just a bit more fluid.

With that said, we noticed a distinct lack of effects like rain in its Tokyo level or snow in the Iceland track, no matter the choice of visuals. This issue notwithstanding, Asphalt 8 ran well on the Redmi Go and is a solid showcase of what a sub-Rs. 5,000 Android smartphone can do.

Up next was Arena of Valor from Tencent. Considering the other Tencent-developed game in our tests, PUBG Mobile, refused to run, we were curious to see how the mobile equivalent of Dota 2 and League of Legends plays. To our shock, Arena of Valor was a treat on the Redmi Go.

Be it pulling off flashy moves or teaming up with other players to take down enemy towers there was little amiss with no stutter. It looked decent too, despite being on the lowest possible graphics. We could turn the options up to medium or even high, but that introduced enough slowdown for us to set it back to the lowest option. Not that we were complaining considering how much the Redmi Go costs.

Considering that this is a budget-focussed handset running a no-frills version of Android, there obviously aren'y any gaming-related features like a gaming mode to increase performance or battery life. Regardless of what we played, be it Free Fire, Asphalt 8 or Arena of Valor, we lost about eight percent of battery for 20 minutes of gameplay on the Redmi Go over Wi-Fi, which isn't too bad.

The Redmi Go got slightly warm to touch over our 20 minute play sessions both indoors and outdoors. Be it intense gunfights in Free Fire or hectic skirmishes in Arena of Valor, it didn't feel hot to touch at all, just warm at best. This extended to multiple Asphalt 8 races too. Not too bad when you consider that thermal management is where a lot of budget smartphones tend to falter.

Is the Redmi Go any good for gaming?

Given its price point and what you get, we were pleasantly surprised at what we could play on the Redmi Go. Unless you're hellbent on playing PUBG in some form, the Redmi Go can handle recent 3D graphics-intensive games at a smooth frame rate with few issues. You obviously won't get performance on par with flagship devices, but you're paying fraction of the cost, making it a fair trade off as long as you keep your expectations in check.

Do stay tuned to Gadgets 360 for a comprehensive review of Redmi Go's overall capabilities.

product Redmi Go any good for PUBG Mobile, Asphalt 9, or Arena of Valor? We tell you in our Redmi Go gaming performance review.