Realme GT Review: An All-Rounder at the Right Price 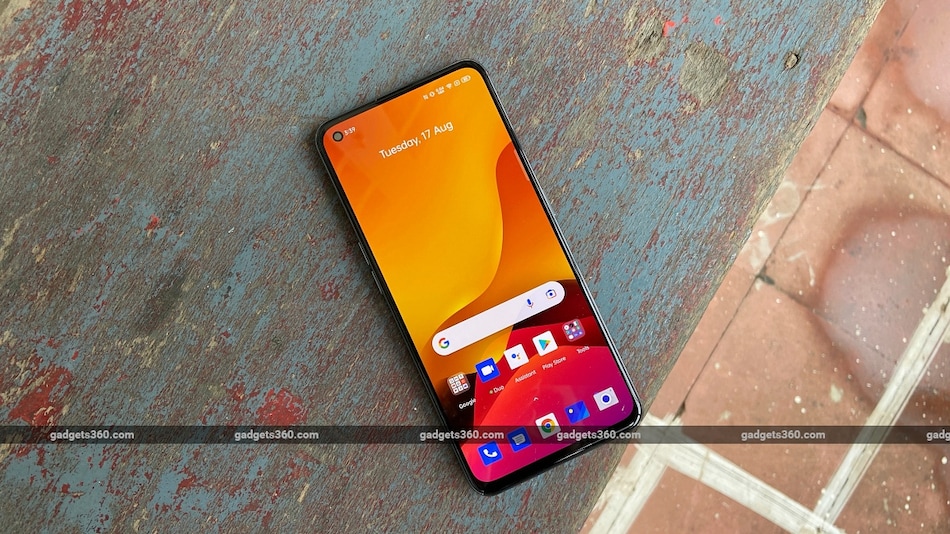 The Realme GT is currently the most high-end offering in Realme's new GT series of smartphones. I've used this phone for more than a week, and it's easy to conclude that the GT is not a top-of-the-line flagship killer with features like wireless charging and an IP rating. Instead, it's more of a premium offering, which aims to get you the best possible features at a competitive price. Save for some minor niggles, the Realme GT has been a good all-rounder in my experience.

Pricing is where the Realme GT truly shines. It is the most affordable smartphone in India to pack a Qualcomm Snapdragon 888 SoC, with the base 8GB RAM and 128GB storage variant priced at Rs. 37,999 and the top-of-the-line 12GB RAM and 256GB storage variant (which I tested) priced at Rs 41,999. The price gap between the two variants is quite large, but you do get more RAM as well as additional storage. Even when compared to devices such as the iQoo 7 Legend and OnePlus 9R (Review), the prices are lower for the same configurations.

Realme's choice of going with a slightly smaller display than the current competition is interesting. It makes the overall footprint of this smartphone small and so it's easier to hold. The base layer of the back panel (beneath the vegan leather on my unit) is made of polycarbonate, while the frame is made of plastic.

I'm not a fan of the artificial leather on the back of the Racing Yellow finish as it's not soft, but just has a slightly rubbery texture. It feels more like rubber than leather, but it does appear rugged and seems as though it will last. I liked the finely textured black stripe (which Realme calls a racing line) that runs off-centre through the back. It's made of plastic, but I also like how Realme has managed to hide most of the rear camera module within it, with only the lenses visible. The camera module barely protrudes from the back panel, so the Realme GT does not wobble much when placed on a flat surface.

The Realme GT features a 6.43-inch Super AMOLED display with a cutout for the selfie camera. It features thin bezels on the left, right and top, though the one at the bottom is slightly thicker. The fingerprint reader is embedded into the display, and it works reliably.

The yellow-and-black colour scheme of the Racing Yellow finish was designed keeping young people in mind, according to Realme. The lower-priced variant of this phone is also available in Dashing Blue and Dashing Silver for those who prefer something a bit more subtle. The blue and silver options feature glass back panels, which also makes these units slimmer than the ones with the vegan leather finish, by about a millimetre.

The Realme GT is powered by Qualcomm's top-end Snapdragon 888 SoC, which is also available in the Mi 11X Pro and the iQoo 7 Legend. The Realme GT offers up to 12GB of LPDDR5 RAM and 256GB of UFS 3.1 storage, but there's no room for storage expansion. Communications options include dual-band Wi-Fi 6, Bluetooth 5.2, and NFC along with support for several 5G bands and dual 5G standby. The phone has a 4,500mAh battery, and a 65W charger is included in the box.

The Realme GT comes with plenty of preinstalled bloatware

The smartphone runs Realme UI 2.0, which is based on Android 11. It focuses on personalisation and lets a user customise several UI elements such as the always-on display and even the weight of the font. High-quality haptics also enhance this fluid software experience with very precise vibrations. The phone comes with several preinstalled third-party apps including Booking.com, Josh, and Moj, plus some Realme-branded apps such as Realme Link, Community, and HeyFun. While I could uninstall most of these apps, I could not remove FinShell Pay. As with every other Realme smartphone I've reviewed so far, I did see notifications from the Themes app daily asking me to download a new theme, font, or wallpaper. These can get annoying after a while, so I blocked them in the Notifications & Status Bar settings.

The Realme GT features a 6.43-inch full-HD+ Super AMOLED panel that is quite sharp and showcases punchy colours. It can easily handle direct sunlight. It also has a 120Hz peak refresh rate with a maximum 360Hz touch sampling rate. Stereo speakers are common in smartphones at this price and thankfully Realme has included a pair in the GT. While they sound loud and clear, they aren't balanced, with the bottom speaker sounding a lot louder than the top one. Unlike most smartphones in this segment, Realme offers a 3.5mm headphone jack, which is placed at the bottom, next to the Type-C USB port.

With good stereo speakers and a punchy Super AMOLED display, I did miss support for HDR10 on the Realme GT. Still, watching movies was an immersive experience thanks to deep blacks and stereo sound.

I received the 12GB RAM and 256GB storage variant of the Realme GT for review. Realme UI 2.0 felt fluid with regular use. There was no hint of lag or stuttering during the review period, despite having loads of preinstalled apps.

The Realme GT performed on par with the rest of the smartphones in this price segment. It achieved a score of 8,02,974 in AnTuTu, and scored 1,138 and 3,408 in Geekbench's single- and multi-core tests respectively.

Gaming performance was quite good, with most games running at the highest settings possible. The Realme GT did get mildly warm, but this could only be felt on display, while the back panel remained quite cool. The phone also features ‘GT Mode' like on the GT Master Edition. Switching it on from the notifications shade made no noticeable difference in the games that I played, but it did raise the temperature of Realme GT by a bit.

I played Call of Duty: Mobile, and it ran smoothly without any stuttering at Very High graphics and Max frame rate. Asphalt 9: Legends also performed well at its High Quality graphics setting and with the 60fps mode enabled.

The 4,500mAh battery lasted me about two days with casual use, and about a day and a half with more gaming, which is quite good. The Realme GT also performed well in our HD video loop battery test, lasting 18 hours and 42 minutes on a single charge. The 65W charger is mighty quick and takes the phone from a dead battery to fully charged in about 35 minutes.

The Realme GT features three rear-facing cameras and a single front-facing one. You get a 64-megapixel primary camera, an 8-megapixel ultra-wide-angle camera, and a 2-megapixel macro camera. Selfie duties are handled by a 16-megapixel front camera. The camera app interface is the same as what we've seen on most recent Realme devices, with all important controls laid out at the top of the screen and sub-menus for adjusting the frame or setting the video resolution. The UI was a bit annoying as I almost always ended up tapping the AI button accidentally when trying to reach some of the less easily accessible settings.

Daylight photos taken using the primary camera came out sharp and clear, but with a bit of oversaturation even with the AI mode turned off. Some might like this punchy colour palette as it brings regular photos to life, but I found the colours a bit too exaggerated. I had noticed this even on the Realme GT Master Edition. Dynamic range was good, with enough detail in both bright and the dark areas of the photo. The primary camera was quick to focus but there were some odd occasional instances when it took a few extra seconds after switching camera modes.

The main camera also performed quite well in low light, and managed good photos with minimal noise under street lighting. There was enough detail in low-light shots, though the dynamic range fell a bit short in the shadows. I usually only needed to fire up the Night mode in very dimly lit environments, and it did a good job of bringing out more details in darker areas of a scene as well as reducing noise even further.

The ultra-wide-angle camera shot clear and usable photos in daylight. Details were sharper in the centre of the frame, with things getting a bit blurry towards the edges. I also noticed a bit of purple fringing near the edges of photos. However, the ultra-wide camera isn't usable in low light unless you switch to the Night mode. The 2-megapixel macro camera was not exactly useful, as I managed to capture better photos by cropping photos shot using the primary camera.

Videos shot at 1080 as well as 4K at 30 fps looked impressive with good dynamic range, detail, and stabilisation. Videos shot at 60fps also showed good detail, but the frame was cropped to the extent that they almost looked like they were zoomed in. This is probably done to improve stabilisation (which it does quite well), but framing became quite difficult. There's also noticeable purple fringing when videos are shot at 60fps.

The main camera did a surprisingly decent job with video in low light, but with reduced dynamic range, noticeable noise, and slight shimmering when walking about. Turning on the AI enabled Night Video mode, did an excellent job of bringing out detail and reducing noise in the darker areas, making videos appear much like Night mode photos. While it is impressive to see what the camera software is capable of, colours do get a bit too saturated depending on the lighting in the vicinity. A bit of fine-tuning might be needed to make this feature more usable.

The Realme GT offers good value for money if you go with the base configuration, which is priced at Rs. 37,999. This means that you will only get a glass back, and there won't be the choice of vegan leather. The 12GB RAM variant (Rs. 41,999) falls a bit short in terms of features when compared to the competition. There's no 8K video recording like on the Mi 11X Pro (Review) (from Rs. 39,999) and no IP rating.

The iQoo 7 Legend (Review) (from Rs. 39,990) is also a worthy contender, and is a solid performer given its price. Moreover, it features a better camera setup and premium build quality but its smaller battery might not suit some buyers. The Realme GT offers very quick charging and a good overall usage experience, so even at Rs. 41,999, the higher-end variant is an all-rounder.