Four rear cameras make this brand new phone look impressive, but that isn't all you get.

Realme, the value-conscious spinoff of Oppo, has just raised the stakes for low-cost phones in India with a pair of devices that are sure to grab attention for their features and style. The Realme 5 and Realme 5 Pro both feature four rear cameras which will tempt many buyers, and both look great with their geometrically patterned rears. Realme has so far done a great job in a segment previously dominated by Xiaomi, and both these phones will compete directly against models that the Chinese giant has so far been successful with. We're going to take a closer look at the more premium of the two, the Realme 5 Pro, which we were able to spend a little time with prior to its official unveiling.

The Realme 5 Pro is surprisingly a little smaller than the Realme 5, but that isn't a problem for us at all since it's easier to handle. One-handed use is not very difficult, thanks mostly to the curved rear shell. Even though it looks glossy, it's not slippery at all and we never felt that this phone was in danger of falling from our grasp. The 184g weight is very manageable.

The company's signature abstract angular lines can be seen on the rear of the Realme 5 Pro, but even though the various crystalline panels each reflect light differently, the overall finish of the back is has a single, smooth texture. There's also a subtle overall colour gradient, going from a rich emerald green at the top to a sapphire blue at the bottom on the Crystal Green unit that we have. There's also a Sparkling Blue colour option which has the same pattern but is more purple on the top fading into light blue on the bottom.

We aren't too fond of the pre-applied adhesive screen guard that our unit had, but many buyers will appreciate it. The front of this phone has a prominent chin, but the top and side borders around the screen are quite minimal. There's a waterdrop-style notch at the top for the single 16-megapixel front camera, which was to be expected.

Realme says it has used Corning Gorilla Glass on the front of this phone for safety. The screen of the Realme 5 Pro measures 6.3 inches diagonally and has a full-HD+ 1080x2340 resolution. In our brief time with the device, we found the screen to be quite vivid and bright. Text and icons looked suitably crisp, and colours were deep. Overall, we liked what we saw, but we'll have to spend more time with this phone when we conduct our full review.

Part of that positive impression comes from the very modern, slick design of ColorOS 6 on this phone. The UI icons, text, spacing, and general design stood out to us. The pull-down notifications shade with integrated quick notifications, the Settings app, and the task switcher all look quite slick. However, we counted over 10 preloaded first- and third-party apps, and we'll have to wait and see how this affects the overall usage experience. 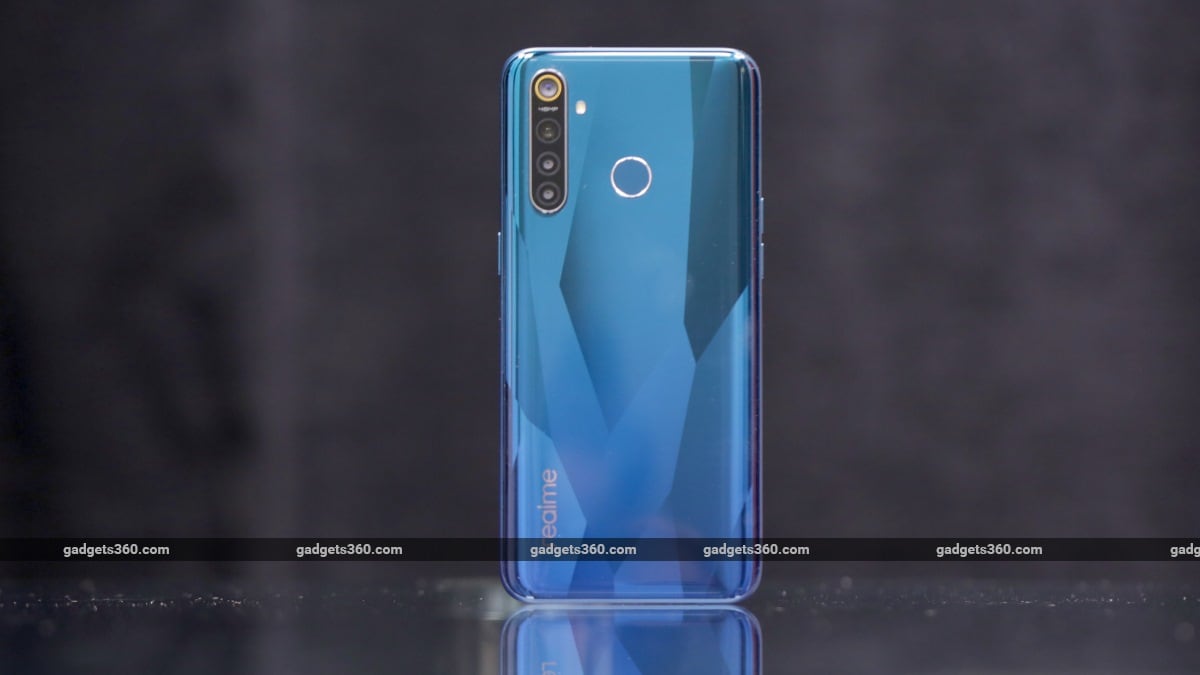 The Realme 5 Pro has its power button on the right and volume buttons on the left, and all of them are within easy reach. There's a 3.5mm audio socket, USB Type-C port, and single speaker on the bottom. The top is blank except for a secondary microphone. The tray on the upper left has individual slots for two Nano-SIMs as well as a microSD card for storage expansion. There's also a silver-ringed fingerprint sensor on the rear, along with the cameras.

The camera module on the rear of the Realme 5 Pro sticks out a fair bit. The 48-megapixel primary camera (which uses the Sony IMX586 sensor and boasts of an f/1.79 aperture plus PDAF) is highlighted with two rings and a text label, while the other three are lined up quietly below it and the flash is off to one side. These other cameras are an 8-megapixel f/2.25 119-degree ultra-wide-angle one, a 2-megapixel depth sensor for portraits, and a 2-megapixel macro camera for extreme close-ups. There's no telephoto lens, which is understandable given the price point.

As for the insides of the Realme 5 Pro, you'll get the impressive Qualcomm Snapdragon 712 SoC plus as much RAM and storage as you choose. Realme says it has used the UFS 2.1 standard for its flash storage chips. There's also a 4035mAh battery and this phone supports 30W VOOC flash charging. Interestingly, you get a 20W charger in the box which isn't going to be as fast but is still better than a lot of the competition, especially at this price level. There's also dual-band Wi-Fi 802.11ac and Bluetooth 5.

Our full review, coming up soon, will go into depth about how useful each of these four cameras is in a variety of situations, and what Realme has done with its software to take advantage of them. We'll also dive into this phone's general performance, display quality, battery life, and much more.

Four cameras will be a very tempting feature that many buyers will not want to pass up, but of course photo quality will be a very big deciding factor for us, so do hang on for our Realme 5 Pro review before making your final purchase decision.