Panasonic has launched a number of phones in India with interesting names, and the latest of these is the Eluga Prim. We don’t really know how Panasonic came up with the idea of using Prim as a model name, because by most definitions it means stiff, formal, and prudish – as in the expression “prim and proper”. The most favourable synonym is “rigidly precise”, which doesn’t make a whole lot of sense for an entry-level phone. Thankfully, we aren’t going to judge a book by its cover.

Panasonic isn’t the first name that leaps to mind when considering which smartphone to buy. Even though the brand is well established in the consumer electronics market, it isn’t as popular as the bigger Japanese and Korean companies, and its models’ prices and specs don’t cause the kind of ripples that have helped newer Chinese brands establish themselves. We’re curious to see whether the Prim has anything that might help Panasonic win fans in India.

Considering its price, and the fact that competition is ridiculously fierce at the low end of the market, the Eluga Prim doesn’t win any major points for design. Our review unit was gold with a white front face, but this phone is also available in grey with a black front face. We found Prim's looks to be pretty ordinary from the front, with its only distinguishing feature being the iPhone-inspired circular home button with a shiny metallic rim. There’s a small Panasonic logo above the screen, and at least on the white model, you can clearly see the front camera and sensor window.

The power and volume buttons are on the side, and you’ll find the 3.5mm audio socket as well as a Micro-USB port on the top. There’s only a small speaker grille on the bottom. The rear is a removable panel with a subtle crosshatch texture, which we actually like a lot. It looks like fabric, doesn’t feel too plasticky, and allows for a decent grip. There’s a rather large protruding camera ring at the top of the back with a vertical triple-LED flash to its left.

The back peels off, unlike most phones today which have metal unibodies. You’ll find two Micro-SIM slots and an independent microSD card slot as well as a removable battery. You have to pop the battery out in order to change SIM cards. There’s nothing wrong with this design – some might find it old-fashioned, and some might prefer not having to keep a SIM eject pin handy.

Speaking of old-fashioned, the Eluga Prim is actually quite compact and easy to hold. Thanks to its 5-inch screen with relatively narrow sides, we had no problem using this phone with one hand, and one thumb could comfortably reach all four corners of the screen. Weight is also quite manageable at 145g. 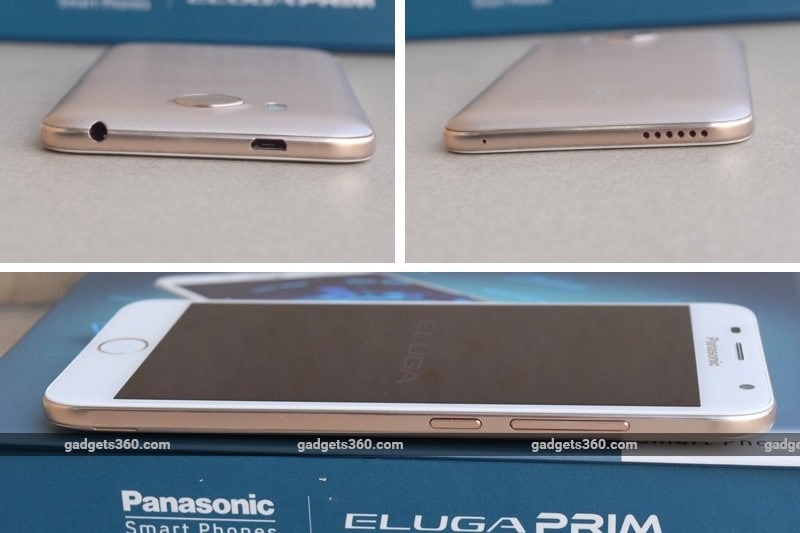 The material and construction quality seem okay at first, but we were very surprised that even minor amounts of force applied to the screen caused the display to warp quite drastically. We don’t see this kind of issue on phones very often at all, and it isn’t a good sign.

The Panasonic Eluga Prim comes in a box with futuristic graphics and typography that don’t seem to really reflect anything about the phone itself. You get a basic 1A charger, a Micro-USB cable, a headset, and an adhesive scratch guard.

We were hoping to find modern specifications that would make up for the Eluga Prim’s less-than-stellar first impression, but were disappointed again. The processor is a relatively pokey two-year-old MediaTek MT 6735, with four CPU cores running at up to 1.25GHz and integrated Mali-T720 graphics. The screen measures 5 inches diagonally and has a resolution of 720x1280, which isn’t terrible by any means but also feels just a little underwhelming at this price level today.

Panasonic knows that it needs to play the specifications game, and the Eluga Prim’s box boasts that it has 3GB of RAM. While that is certainly a selling point these days, actual storage is a disproportionately low 16GB. If you want more storage, you’ll have to use a microSD card – at least support goes up to 128GB. Even the battery feels a bit underpowered at 2500mAh, and there’s no support for fast charging.

The rear camera has a 13-megapixel sensor, while the one in front is just 5 megapixels. Panasonic lists autofocus as a feature, but doesn’t specify any type such as the quicker phase-detection autofocus. You get Wi-Fi 802.11b/g/n, Bluetooth 4.0, FM radio, and A-GPS support. The phone has a basic ambient light sensor and accelerometer, but there’s no gyroscope or magnetometer. On the plus side, there’s a fingerprint sensor and support for 4G as well as VoLTE, which might be the most modern touch on the spec sheet.

At first glance, it looks like the Panasonic Eluga Prim is running stock Android 6.0 Marshmallow. However, there are a few unique touches. The first one we encountered took us quite by surprise – Panasonic has enabled homescreen rotation. When you tilt the phone into landscape mode, homescreen icons and widgets reorganise themselves, and even the Android navigation buttons switch orientation. The app drawer can also launch in landscape. While this doesn’t hurt the phone in any way, we don’t really see much use for it.

The Settings app has a few custom top-level entries, including one labelled “Turbo download” which lets you combine the bandwidth of Wi-Fi and cellular data connections. You can swap the positions of the on-screen Android navigation buttons if you’re used to having the Back button on the right, and you can define two-finger gestures to launch the phone and messaging apps (but you can’t make these gestures do anything else). They’re supposed to work on the homescreen and in standby, but we couldn’t get them to work unless the phone was on and unlocked. There’s also a preinstalled app just called 'Gesture’ which lets you define your own shortcuts to launch apps with. When enabled, a semi-transparent button overlay is permanently visible on screen. You have to tap it, and the screen changes to an input panel, into which you draw your gesture. You can’t use it to quickly activate controls like toggling Bluetooth, or compose a message to a predefined contact, for instance. It’s pretty much always faster to just launch your apps normally, which means that this function is useless except potentially for those who have mobility impairments.

For some reason, Panasonic has decided that the physical Home button should serve as a multi-function Android navigation tool. Pressing it normally takes you to the homescreen, but if you just tap it, you’ll go back and if you double-tap, you’ll see the app switcher. You cannot turn this off even if you want to, despite the presence of standard on-screen navigation controls (which you can’t turn off either). This led to more than a few moments of confusion when we first starting using the Prim, and then we just wound up never using it.

The display is more than adequate for most uses. It’s bright and punchy, and the low resolution isn’t an issue at this size, even with small text labels. We had a little bit of trouble in sunlight, but while viewing angles are good, whites tend to become yellowish beyond roughly 45 degrees. Videos look good, and playback is smooth enough. 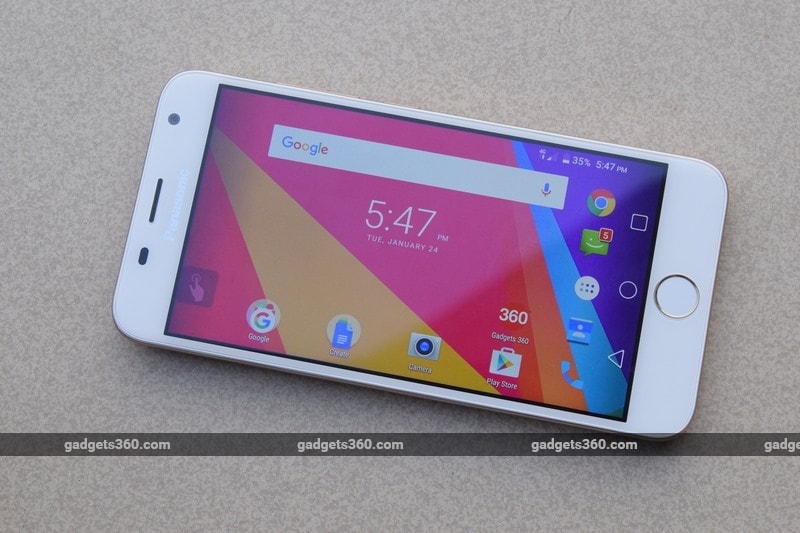 Sound coming from the speaker is a bit muffled and scratchy with no bass to speak of, but it can get reasonably loud. The bundled headset is decent, though for some reason it has a physical three-position volume slider rather than buttons, which means you can’t control volume or playback on the phone. We don’t usually have any reason to comment on a phone’s system sounds, but we have to say that the Eluga Prim’s default notifications and ringtones are unnecessarily long and extremely tacky – especially the totally pointless boot-up sound.

Formal benchmark testing shows that there isn’t all that much raw power under the hood. AnTuTu gave us 29,253 points overall; Geekbench 4’s multi-core test score was 1,491; 3DMark Ice Storm showed 4,120 points; and GFXbench’s T-rex test ran at only 11fps.

Games such as Dead Trigger 2 ran a bit choppily, and we could feel a little heat around the upper rear of the phone after about fifteen minutes of play. Other than games, most apps ran without any trouble and even switching between them was quick and easy. The fingerprint sensor worked well and day-to-day usage presented no problems. 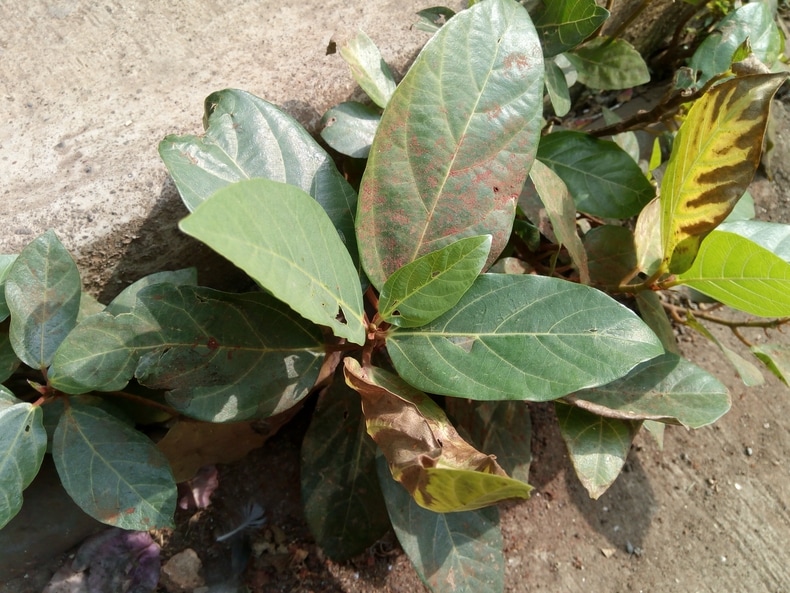 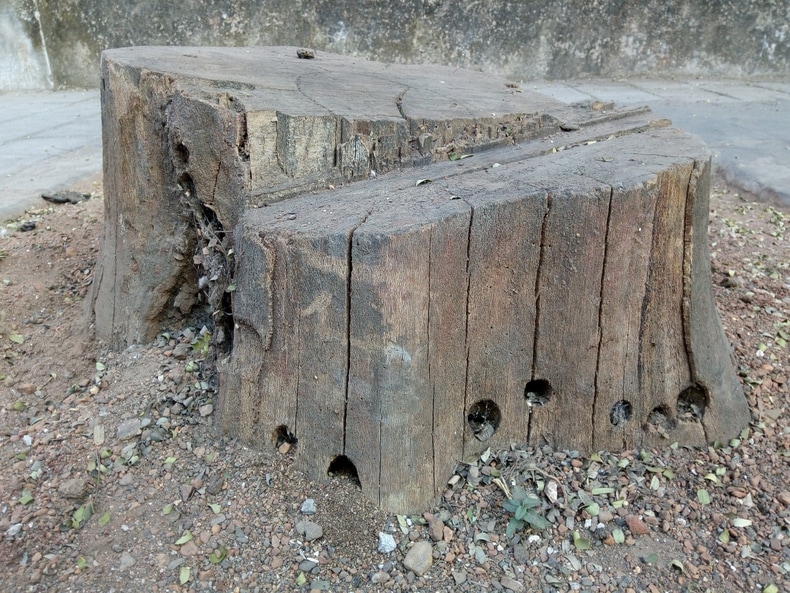 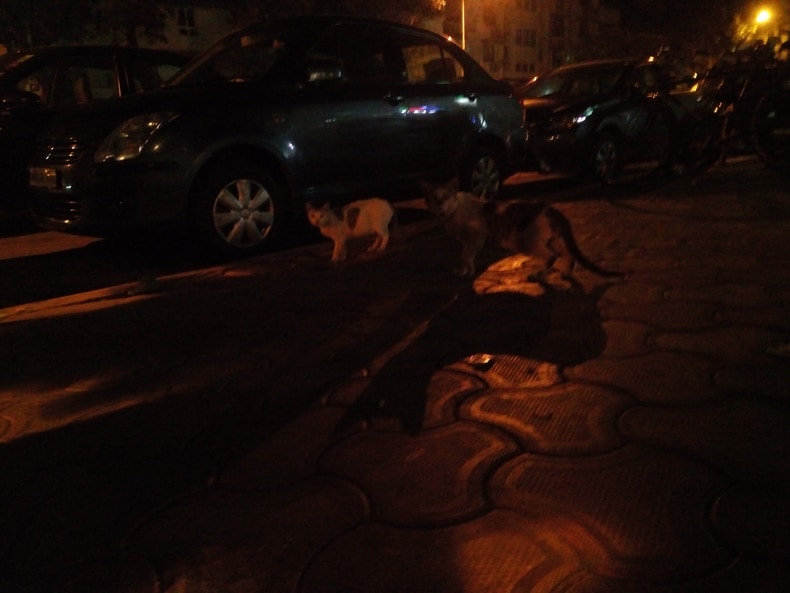 The Eluga Prim’s camera app is pretty basic, with most of its controls buried in a menu with multiple tabs. Photos came out well as long as there was sufficient natural light. As is typical, our close-ups came out the best, with detailed textures and sharp focus. Shots with subjects at a distance weren’t all that great. However all our shots, taken over multiple days in multiple locations, had an unusually warm colour cast. Photos taken at night were poorly defined and tended to lose colour definition. Focusing wasn’t too slow, but several shots came out blurry thanks to long exposures. The triple-LED flash was harsh and not very useful.

Unbelievably, video is recorded at 640x480 by default, which you might not realise till it's too late because it’s labelled “High” in the quality section of the video tab in the menu. The highest possible setting is “Fine”, which turned out to be 1280x720. If you’re curious, “Medium” is 480x320 and “Low” is a farcical 176x144. Videos were grainy and underwhelming in all respects.

Our misgivings about the Eluga Prim’s low battery capacity turned out to be well founded. The phone lasted only 7 hours, 48 minutes in our HD video loop test, which is well below average for today’s smartphones. We could stretch usage to a full day if we kept things very light and didn’t play games or stream video much, but most typical users will likely need to reach for the power bank before the day is out.

Verdict
The Panasonic Eluga Prim is an odd phone, not least because of its name. It simply does not belong in the market at this price point in this day and age. It isn’t difficult to use, flawed by design, or defective in any way, but it is utterly and completely overshadowed by its competition. Take the Xiaomi Redmi 3S Prime (Review) for instance, which topped our most recent roundup of the best phones priced under Rs. 10,000 – it has a stronger processor, more storage, bigger battery, far better cameras, better construction quality, and is priced lower. The rest of the list continues in the same vein.

Panasonic could cut the price of the Eluga Prim from its current price of Rs. 10,290 to around Rs. 7,000, but we’d still recommend spending a little more and buying one of our top picks instead. Despite a valiant effort, the competition appears to be too strong for Panasonic right now, and that’s a pity.

Lenovo K6 Power Variant With 4GB of RAM Launched in India: Price, Release Date, and More
Samsung Ties Up With Imint for Video Stabilisation and Other Camera Features