Can the Oppo Reno 2 stand its ground against offerings from Xiaomi, Asus, and OnePlus?

Oppo brought the Reno series to India in May this year, turning its focus to smartphone cameras. This sub-brand recently got an overhaul with the launch of the Reno 2 series. We have already tested the Oppo Reno 2Z (Review) which is priced at Rs. 29,990. We have now got our hands on the Oppo Reno 2, which is the highest-end offering in the series at the moment. The Reno 2 is powered by the Qualcomm Snapdragon 730G SoC, boasts of a quad-camera setup, and has a shark-fin pop-up selfie module. The smartphone seems to offer decent hardware, but how much of that translates to good performance in real life? We put the Oppo Reno 2 through our tests to find out.

All the models launched in the Reno 2 series have similar designs when seen from the front. The Oppo Reno 2 stands out a bit thanks to its shark fin pop-up camera module. At the front, the smartphone sports a 6.5-inch AMOLED display and has thin bezels all around. The shark fin module on the Reno 2 swivels up to reveal the selfie camera. This module also houses the secondary microphone and the earpiece. The frame of the Reno 2 has a thin grille at the top to allow sound from the earpiece to pass through. Because of this arrangement, we found the sound of people we were talking to on calls to be hollow.

Oppo offers the Reno 2 in two colours — Ocean Blue and Luminous Black. The Ocean Blue variant has a subtle gradient finish that looks really nice. If you don't like gradient finishes, you may want to opt for the other variant which has black as the primary colour surrounded by a blue highlight around the edges. 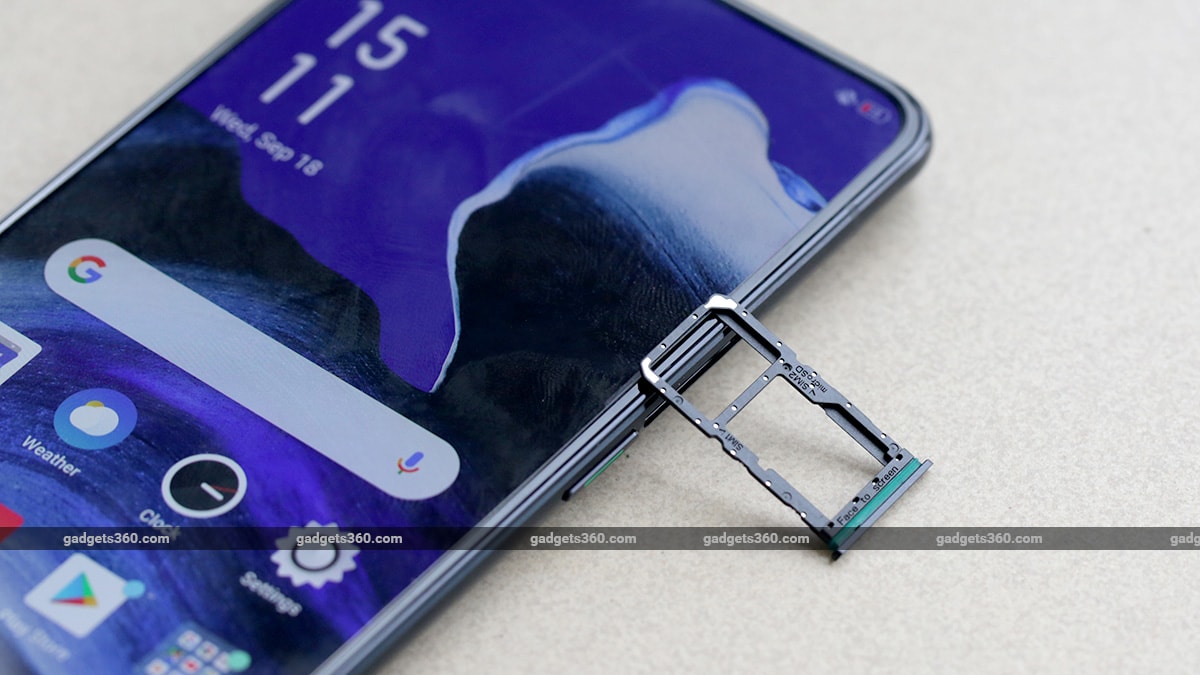 Second SIM or more storage? No, you can't have both with the Oppo Reno 2

This smartphone isn't bulky, and offers a premium feel thanks to its glass back and metal frame. The Oppo Reno 2 has a 3.5mm headphone jack at the bottom along with the loudspeaker, primary microphone, and USB Type-C port.

At the back, the Reno 2 packs in a quad-camera module that sits flush with the back of the smartphone just like on the Reno 2Z. The smartphone also has a nub at the back which raises the phone slightly when placed on a flat surface. Oppo has placed the dual-LED flash next to the cameras.

Since the Oppo Reno 2 has a glass back, it tends to pick up smudges rather easily. Oppo provides a nice case in the box which can help you avoid this. The Reno 2 gets a 20W VOOC Flash Charge 3.0 charger in the box along with a pair of headphones.

The front of the Reno 2 is dominated by the 6.5-inch full-HD (1080x2400 pixels) AMOLED display which gives this phone a 93.1 percent screen-to-body ratio. We found the display to be bright enough outdoors. The Reno 2 offers two colour modes, Vivid and Gentle, and you can also change the colour temperature of the panel. There's an in-display fingerprint scanner as well which is quick to scan a finger and unlock the device.

Powering the Oppo Reno 2 is the Qualcomm Snapdragon 730G, making it one of only a few smartphones in the market to sport this processor. It has been in the news recently as Realme has revealed that it will use it for its Realme XT 730G. The Snapdragon 730G is an octa-core processor based on an 8nm manufacturing process. It has two Kryo 470 performance cores clocked at 2.2GHz and six Kryo 470 efficiency cores clocked at 1.8GHz. The Snapdragon 730G is gaming-centric and has Snapdragon Elite gaming features that claim to give it an edge while gaming. Graphics duties are handled by an Adreno 618 GPU. Peek-a-boo! The selfie camera module swivels out when in use

Oppo has paired the Snapdragon 730G processor with 8GB of RAM and 256GB of storage. There is only one configuration of the Oppo Reno 2, just like the Reno 2Z. Storage is expandable thanks to a hybrid dual-SIM slot. We had close to 213GB of space left after loading up the device with our choice of apps and games.

The Oppo Reno 2 has support for Bluetooth 5, dual-band Wi-Fi 802.11ac, five satellite navigation systems, and dual 4G VoLTE. It also has the usual array of sensors. Oppo has managed to pack in a 4,000mAh battery.

Software is similar to what we recently saw on the Reno 2Z. This smartphone also runs ColorOS 6.1 on top of Android 9 Pie. Our unit was running the August security patch but got a software update to the September patch during the course of our review. We found a similar amount of bloatware preinstalled on the Reno 2 as on the Reno 2Z, which we reviewed just before this. Some of the bloatware includes UC Browser, Facebook, NewsPoint, Dailyhunt, Paytm, and Helo, Webnovel, and Amazon. These apps can get really spammy after you launch them for the first time. Thankfully, they can be uninstalled. Oppo has its own store for apps called the App Store, and Game Center for games.

The overall user experience is similar to that of the Reno 2Z and we have covered it in detail in our Reno 2Z review.

The Snapdragon 730G powering the Oppo Reno 2 is a capable processor, and we had no issues while using the smartphone. It is powerful enough to take care of day-to-day tasks without breaking a sweat. Oppo has gone with 8GB of RAM for this device which makes multitasking a breeze. We could launch multiple apps and the phone could go without killing them in the background. 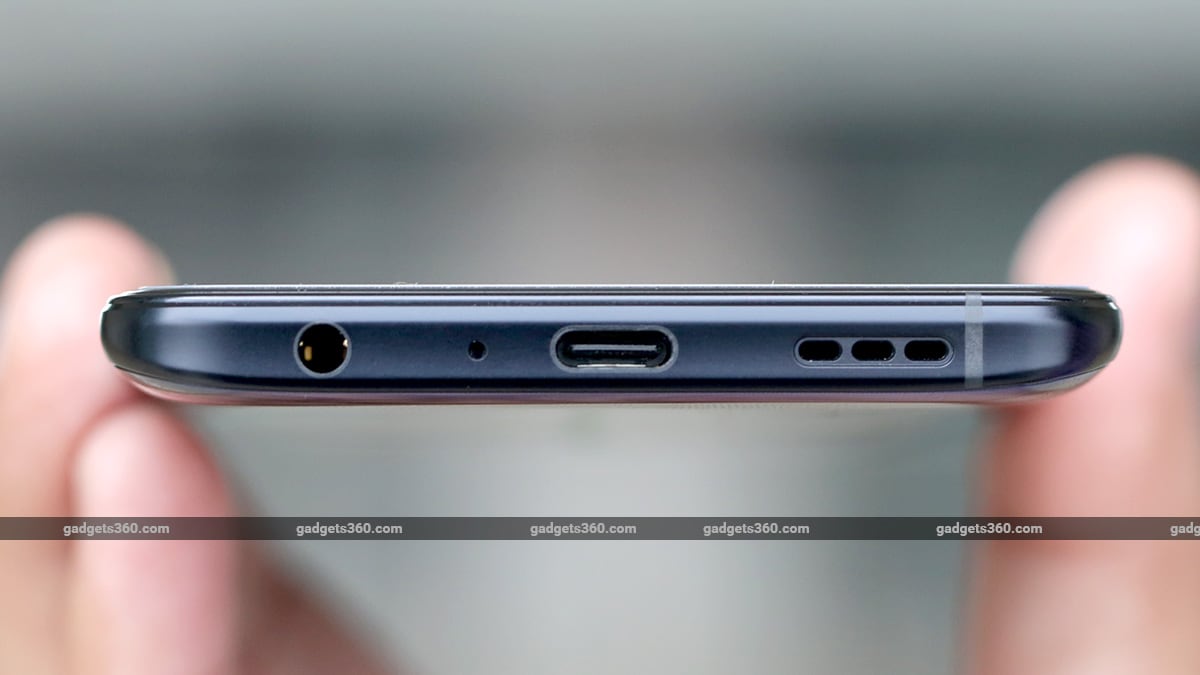 We played PUBG Mobile on the Oppo Reno 2 and the phone defaulted to the High preset with graphics set to HD and the frame rate set to High. We could not bump the quality up further, but the device ran the game at these settings without any issues. We played the game for 24 minutes, after which it registered a 9 percent battery drop. It was also barely warm to the touch after gaming.

The Oppo Reno 2 was efficient in terms of battery life, and lasted us over a day and a half with our usage which consisted of using Google Maps for navigation, an active WhatsApp account, and using the cameras extensively. In our HD video loop test, the smartphone lasted for 15 hours and 34 minutes, which is lower than the Reno 2Z. The 4,000mAh battery on the Reno 2 charges quickly when using the supplied 20W fast charger. In our test, the phone charged to 47 percent in 30 minutes and 85 percent in an hour. Topping the phone up completely took about one hour and 25 minutes.

We have already established that the Reno series from Oppo is camera-centric, and the Reno 2 packs good hardware. It has a quad-camera setup at the back consisting of a 48-megapixel primary sensor with 20x digital zoom along with optical as well as electronic image stabilisation. There's also a 13-megapixel telephoto camera and an 8-megapixel ultra-wide angle camera. The fourth sensor on the Reno 2 is a 2-megapixel depth sensor. 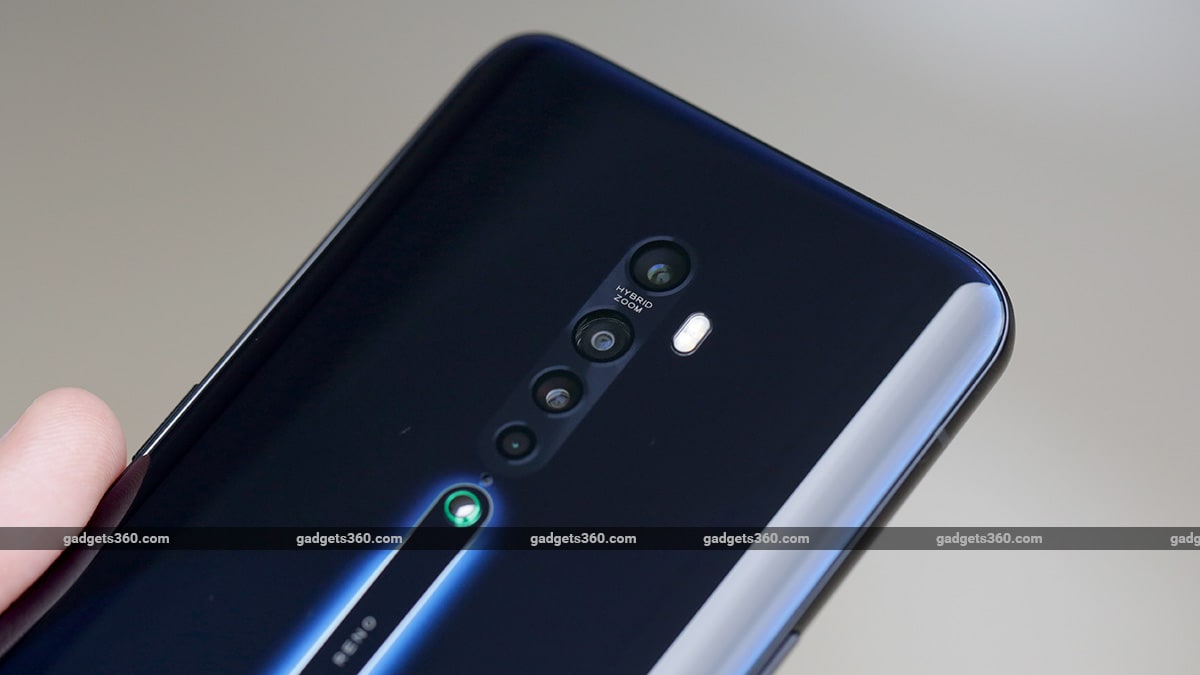 The camera app is similar to what we have seen on the Reno 2Z and has some of the same issues as well. One of the new features that the Reno 2 introduces is called Sound Focus, which is similar to Samsung's Zoom Mic feature on the Galaxy Note 10 (Review). To try this out, we had to go into the camera settings. The smartphone gives you the option to choose between Standard, 3D Recorder, and Sound Focus audio effects. Here again, we didn't like the fact that we had to go into the settings looking for the option.

Photos taken with the Reno 2 in daylight had good detail, and the phone could meter light properly. Zooming in to an image reveals that details are well preserved and objects at a distance are still recognisable. Photos shot using the wide-angle sensor had lower levels of detail and we noticed that their colour tone was slightly off as well. The camera app offers quick shortcuts for 2x and 5x zoom, for which the Reno 2 uses its telephoto camera. These shots also usually had good detail but weren't as sharp as those taken with the primary sensor. The Reno 2 offers 20x digital zoom but we found that the output lacked detail and we needed to rest the phone against a surface to capture a clear shot. 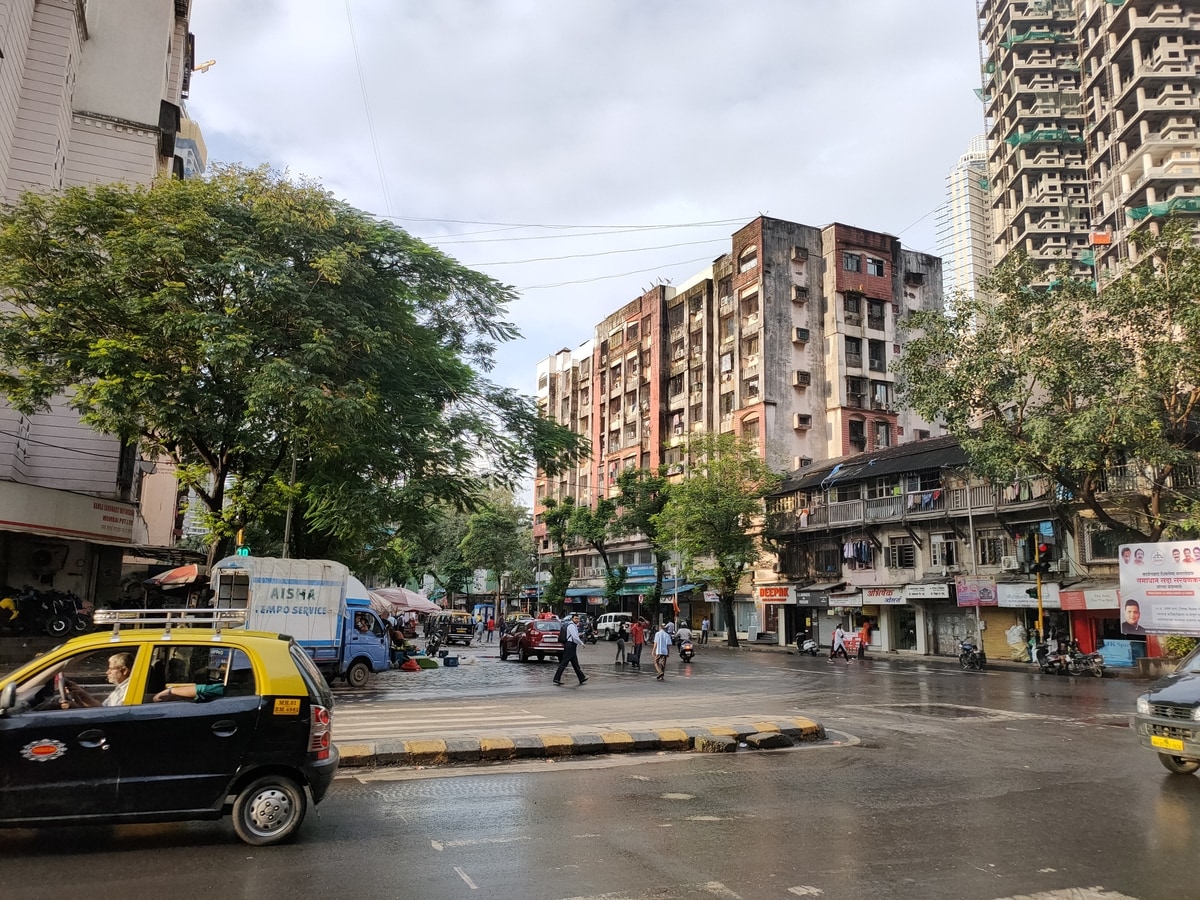 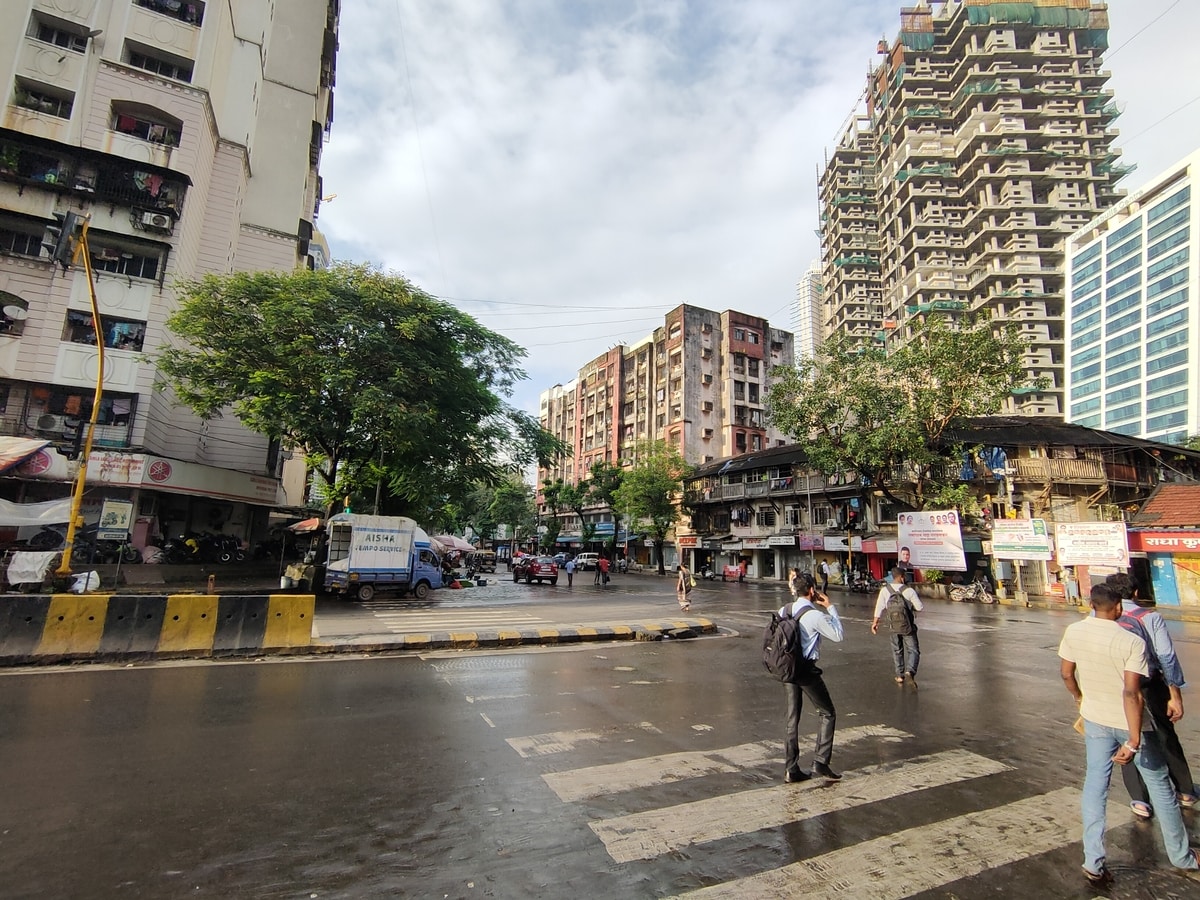 For macros, we observed that the AI can be very aggressive in a few scenarios. This is evident when shooting reds, as the AI bumps the level up to the point that shots look artificial. The Reno 2 lets you set the level of blur before taking a shot in Portrait mode. We found the edge detection to be good, and the phone blurs the background properly. 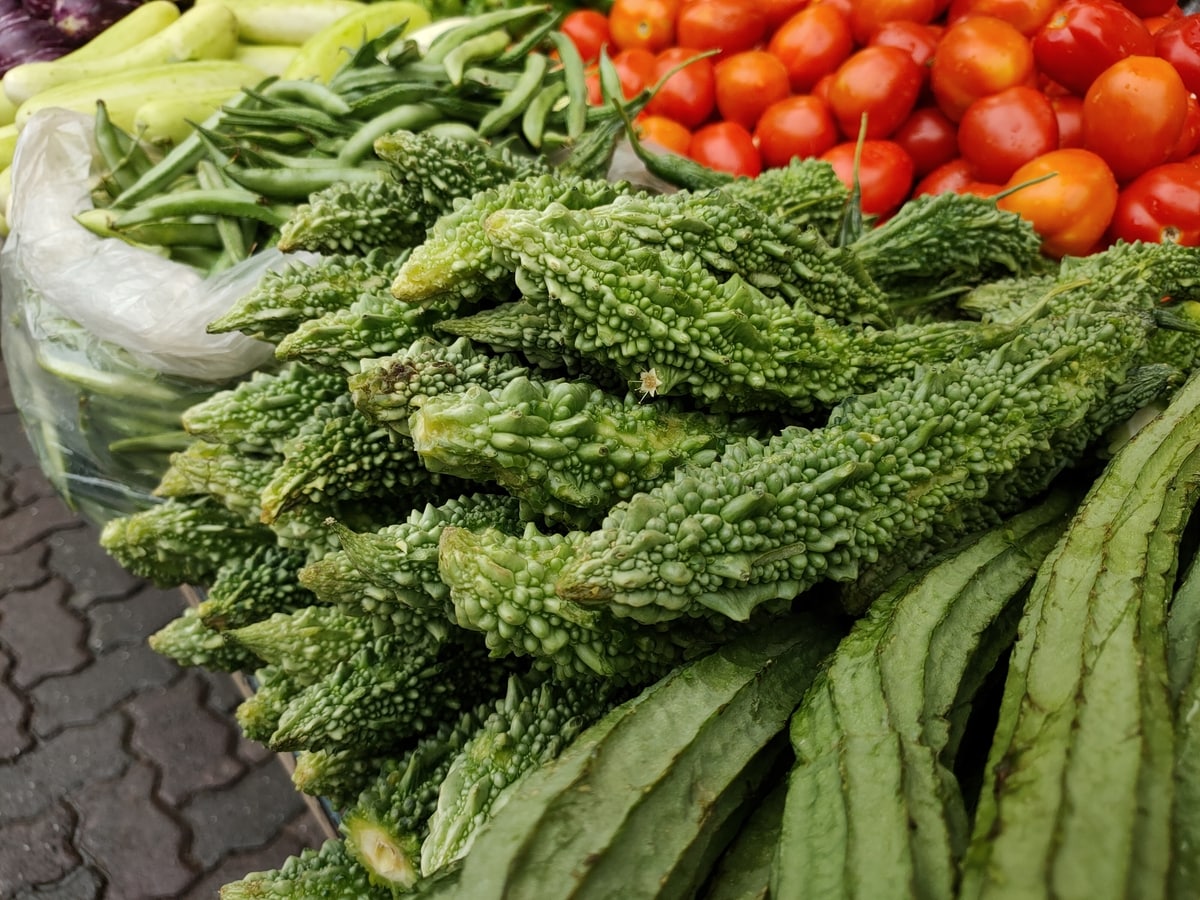 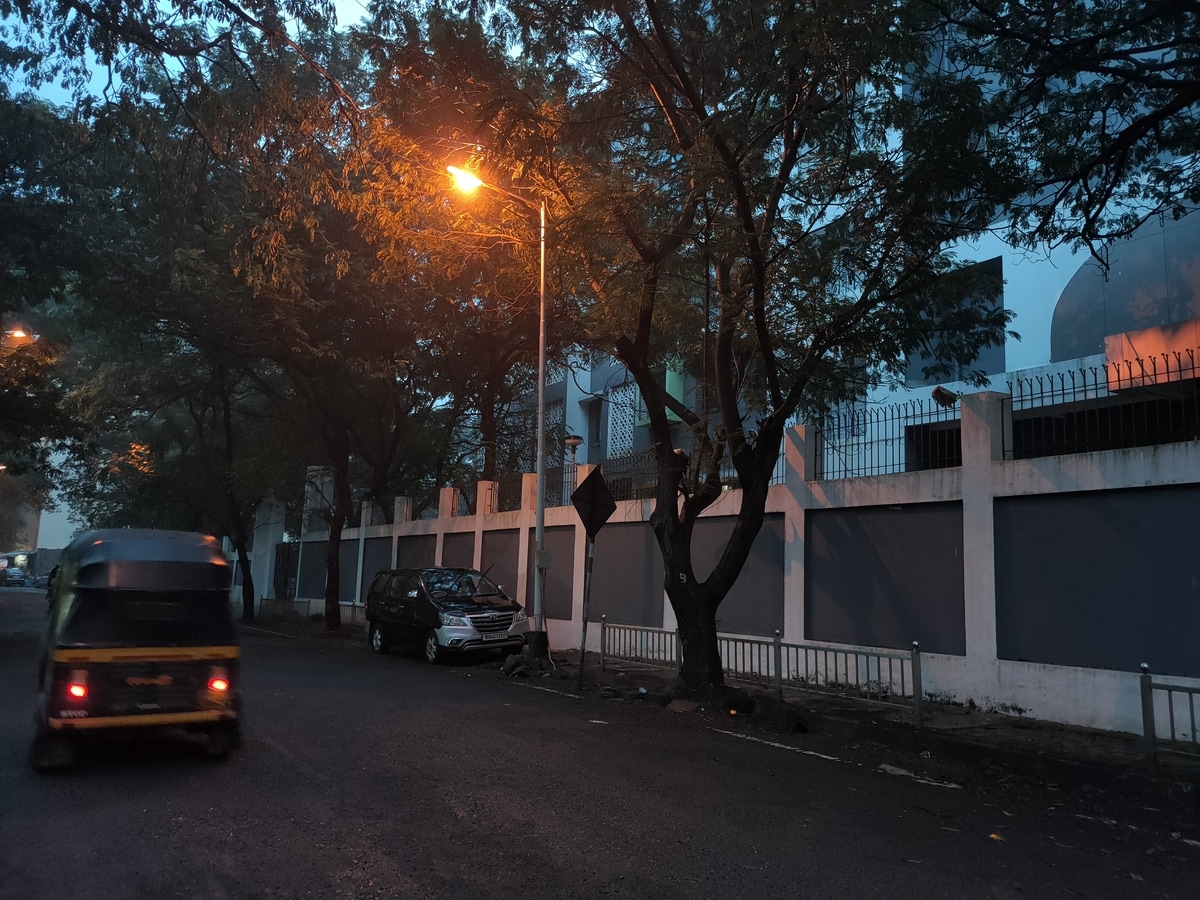 Selfies taken during the day were decent but we noticed that backgrounds were occasionally overexposed. Beautification mode is set to automatic by default but you can switch it off or set parameters manually. Selfies taken in low light lost out on some detail. 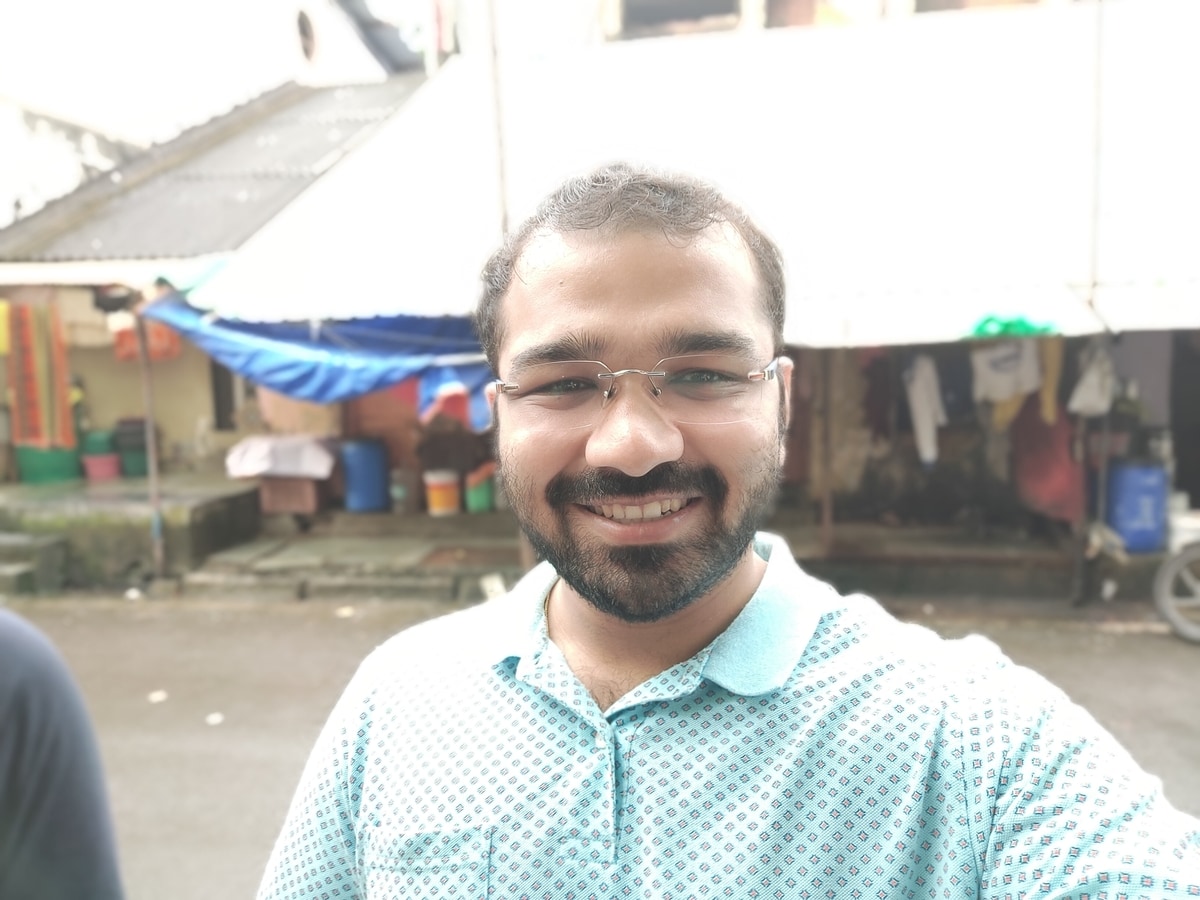 Video recording tops out at 4k 30fps for the primary camera and 1080p 30fps for the selfie shooter. The footage we shot in daylight was well stabilised when shooting at 1080p. The Ultra Steady mode we tried on the Reno 2Z is also present here, and could stabilise footage recorded while we were walking. Video recorded in low light had a visible shimmer effect.

The Sound Focus feature for video recording does work, and we found that the smartphone could bump up the audio level of a subject on zooming in. However, we found that it works best when there is only one source of audio around.

The Oppo Reno 2 feels very much like the Reno 2Z which we reviewed recently, but it does everything a little better. It packs in more power thanks to the Qualcomm Snapdragon 730G SoC and is capable of performing your daily duties without slowing down. The camera setup is versatile and there are some interesting new features such as Sound Focus, which works as long as conditions are favourable.

Priced at Rs. 36,990, the Reno 2 faces stiff competition from the OnePlus 7 (Review) (and soon, the upcoming OnePlus 7T), the Asus 6Z (Review), and the Redmi K20 Pro (Review). These are all very strong models, and they all have an edge over the Reno 2 when it comes to performance. The Reno 2 can fend them off to some extent because of its versatile cameras. However, if you are willing to spend a little more, the older Oppo Reno 10x Zoom Edition (Review) is still available for Rs. 39,990 and will give you the best of both worlds.

Further reading: Oppo, Oppo Reno 2, Oppo Reno 2 Review
Aditya Shenoy Email Aditya
Aditya Shenoy reviews smartphones, wearables, headphones and speakers for Gadgets 360, out of Mumbai. Aditya is a reviewer for Gadgets 360 and has written extensively about smartphones, software updates, and upcoming devices. Aditya is available on Twitter at @adishenoy, and you can mail him at adityashenoy@ndtv.com, so please send in your leads and tips. More
Google Assistant Gets New Privacy Safeguards, Sensitivity Options for Hotword Detection
Google Play Pass App and Game Subscription Service Launched to Take on Apple Arcade