Oppo F7 First Impressions: Meet the Most Affordable Android Phone With a Notch

If you were planning on getting a new Android phone in 2018, then be prepared to embrace the ‘notch’. In the quest for using up maximum amount of screen space, Android manufacturers have begun implementing variations of Apple’s display cut-out of the iPhone X (Review). This doesn’t seem to be just a passing fad either as the next version of Android P will have native support for different display cut-out styles.

The Vivo V9 is the first Android phone to launch in India with the notch and hot on its heels, Oppo has announced the notch-bearing F7 in India at a starting price of Rs. 21,990. This phone will soon replace the current Oppo F5 (Review) and like all F series smartphones, the primary focus here is the selfie camera. But more than just bump up the resolution, which is now a massive 25-megapixels, the F7 boasts of real-time HDR capability, the second generation of AI Beauty and of course, AR stickers. We spent some time the new phone at Oppo’s launch event in Mumbai, and here’s our initial impressions of the new mid ranger.

The Oppo F7 is available in a bright shade of red called Solar Red and a more sober version, called Moonlight Silver, if you opt for the version with 4GB of RAM and 64GB of storage. Both colour versions have an acrylic back panel and not glass. The rest of the body is made up of plastic, which too, has a high gloss finish. The acrylic back does seem to be susceptible to dings and scratches though as we easily managed to create minor abrasions with the tip of a SIM ejector tool. This means leaving it in a bag with any sharp items could cause some unwanted damage, especially if you’re not using a case. The phone feels very light however and the display has a distinct black border above the main chassis, which separates it from the rest of the body.

The 6.23-inch display adheres to the 19:9 aspect ratio and boasts of a Full-HD+ resolution. There’s a screen guard that comes pre-installed on the phone too. Brightness levels seem adequate and viewing angles are not too bad either, although we’re yet to see how it fares under direct sunlight. There’s no notification LED here as most of the upper bezel has been taken over by the display, leaving just a small rectangular cut out for the front camera and the earpiece. Button placement seems good but we’re a little disappointed to still see a Micro-USB port. Considering the price of the phone, we don't se any reason why this wasn't included. We only have a single camera at the back, which is interesting considering nearly everyone is going for a dual camera setup these days. Despite that, the phone still boasts of a ‘Portrait’ mode for the front and rear cameras. The F7 uses a MediaTek Helio P60 octa-core SoC, along with a combination of either 4GB of RAM and 64GB of storage or 6GB of RAM and 128GB of storage. The latter edition is only available in the Solar Red colour trim, while the Diamond Black option will be available in both 4GB and 6GB RAM variants. The Diamond Black version uses the acrylic to refract light, thus creating a diamond-cut like effect. It’s a neat trick and will certainly grab a lot of attention. This reminds us of the design HTC tried way back when, with the HTC Diamond, only that had an actual 3D contoured surface.

During our short time with both the 4GB and 6GB versions of the phone, both versions felt equally speedy. ColourOS 5.0 is based on Android 8.1 Oreo, which is nice to see, although we can’t say we’re big fans of the look and feel of the app icons. The notifications along with the toggle switches can be accessed with a swipe from the top of the display and screen recording is now baked into the OS. When you’re playing a game or watching a video in landscape mode, you can simply swipe in from on of the left of the display to access shortcuts for taking a screenshot, start screen recording or mute notifications.

The main focus however, continues to be the front camera and Oppo says, there’s a lot of artificial intelligence (AI) woven into the new camera app. The real-time HDR features seems to work fairly quickly as there wasn’t a lot of delay from the time we hit the shutter button to when the picture was actually saved. The new AI Beauty 2.0 is said to scan 296 facial recognition points and now extends to your neck and shoulders too, in order to get a more realistic post-processed image. These are big claims from Oppo so we’ll leave our judgment to after we’ve spent enough time testing the F7. As usual, the rear camera gets fewer megapixels compared to the front but it does have a wider aperture of f/1.8, so it might do well in low light scenarios. 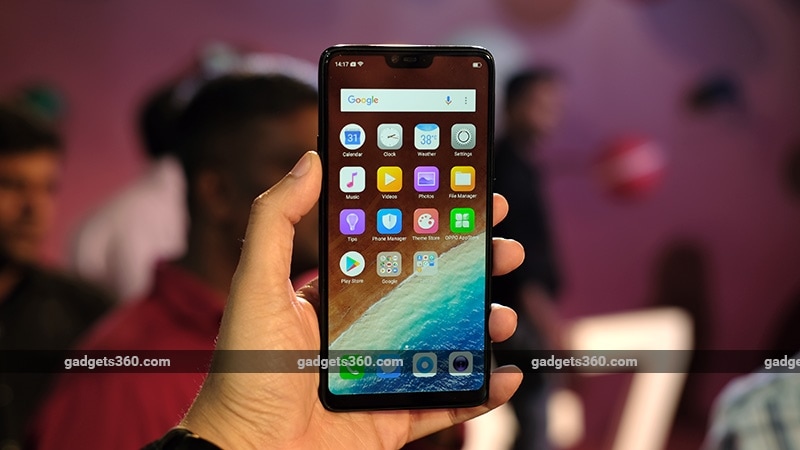 We’ve only spent a little time with the F7 but so far, it seems like an aggressive push from Oppo considering they’ve managed to undercut the Vivo V9 by a thousand Rupees. Out of the three colours, the silver and the black are the ones we like as the red is just a little too in-your-face for our taste. We’re only just getting started with Android notches and these rectangular cut-outs are only a few of the designs that we've seen so far. Oppo themselves have secured patents for different types of notches like an inverted ellipse and an inverted triangle, so we could expect future Oppo phones to bear some of those styles too.

We’ll be doing a detailed review of the F7 so stay tuned to see if all the AI features actually live up to the hype and how it compares with the Vivo V9.