Is this the affordable OnePlus phone you’ve been waiting for?

OnePlus is now competing in the mid-tier smartphone segment with the new OnePlus Nord — a phone that has been generating a lot of hype over the past couple of months. The new OnePlus Nord promises a similar flagship-level Android experience as its 8-series siblings, but at a lower price. The Nord doesn't deviate too far from OnePlus' successful formula, packing in all the essential features one would expect of a OnePlus phone — an AMOLED display, a big battery, and multiple cameras.

With its main number series now elevated to the premium tier, OnePlus needed something to compete in the thriving sub-Rs. 30,000 segment. Vivo's X50 series and Realme's X3 series have been very interesting recent offerings in this segment. A lot of consumers have been asking for a more affordable OnePlus device for many years, and now, we finally have it.

I've been using the OnePlus Nord for the past couple of days, and while I still have a lot more to test, here are my first impressions of the device.

The OnePlus Nord is the start of a new series, and the company wants to make that very clear, right from the packaging. Instead of its typical long red boxes, we have a relatively compact black box with super-sized Nord lettering on the top. Inside the box, the bundled silicone case has a new pattern on it and the stickers are slightly different, but you still get a red Type-C cable, Warp Charge 30T charger, and a SIM eject tool. OnePlus sent me a special media kit, which had the phone as well as a few cases, which will be sold separately. 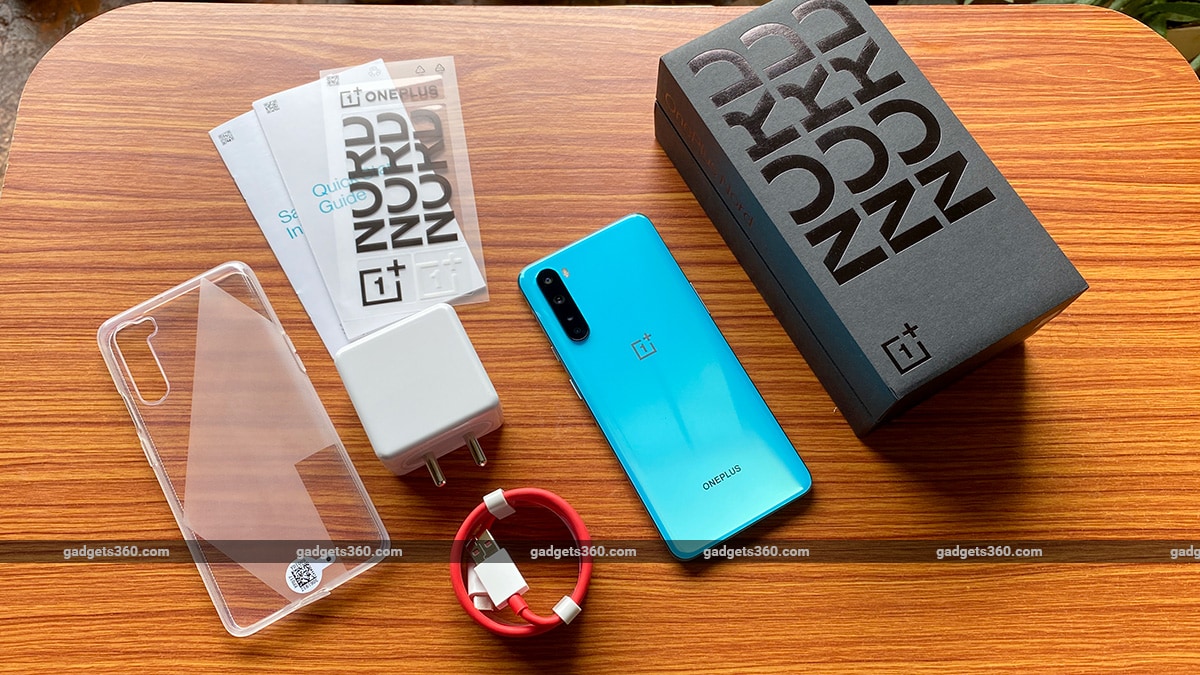 The OnePlus Nord feels a lot lighter than it looks, which is something I immediately noticed upon taking it out of the box. The glossy finish looks good and I really like the new Blue Marble colour. The dual camera cutout in the display and the positioning of the rear camera module to the left are new design choices for a OnePlus phone, but it does resemble some of its competitors, such as the Realme X50m 5G. The OnePlus Nord is also available in a Gray Onyx trim.

The OnePlus Nord feels sturdy, and an accidental drop didn't leave a mark, which is a good sign. There aren't any visible antenna bands along the frame either and that's because this phone uses polycarbonate, instead of metal. The OnePlus Nord has a similar layout for the ports and buttons as the 8 series, and you still get the trademark OnePlus alert slider. Overall, the phone has been pretty comfortable to use so far. 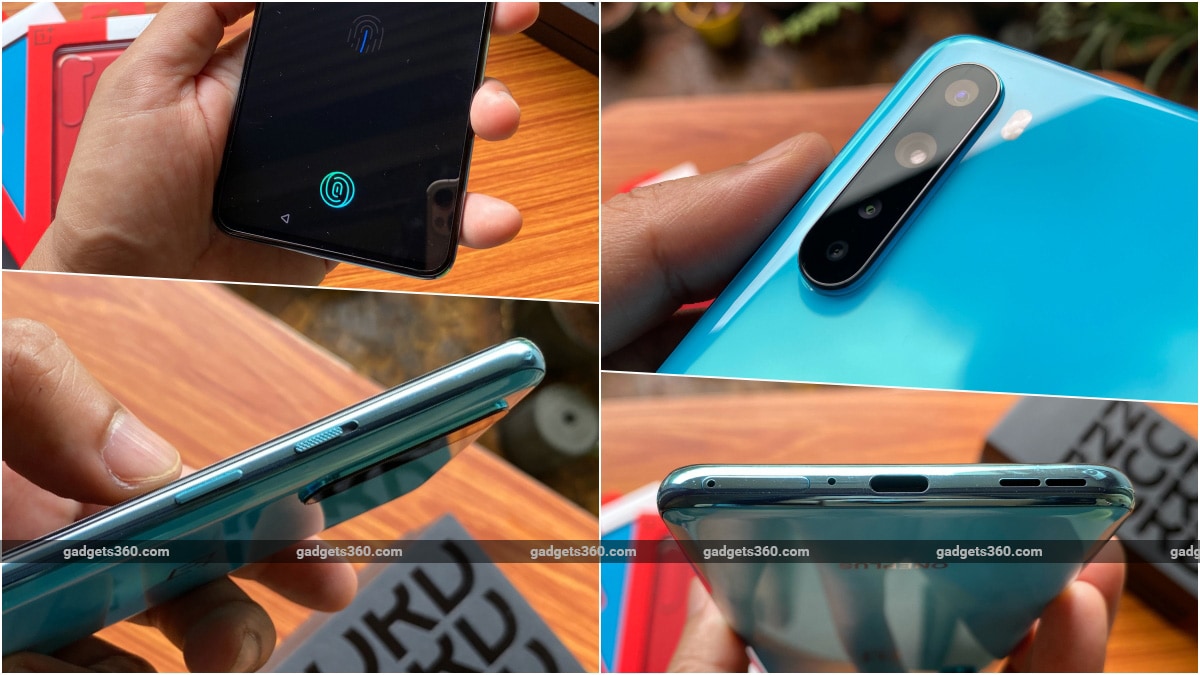 The OnePlus Nord from different angles

OnePlus has used an AMOLED panel for the Nord, which I'm happy to see. It's a 6.44-inch display with a full-HD+ resolution, HDR10+ support, and a 90Hz refresh rate. The latter is something I would have expected OnePlus to drop, but I'm glad it's there. You also get an in-display fingerprint sensor, which works well, as expected. While the display gets bright and colours are often punchy, white backgrounds tend to look a little cool, with a bluish hue, when viewed at an angle. It's a mild inconsistency, but it's something I noticed on my unit.

Finally, we come to the cameras. OnePlus hasn't held back here, and the Nord features four rear cameras as well as two selfie cameras, which is quite a lot. The rear primary camera uses a 48-megapixel Sony IMX586 sensor, just like the OnePlus 8 (Review). There's optical image stabilisation too. The other cameras on the back are an 8-megapixel wide-angle camera, a 2-megapixel macro camera, and a 5-megapixel depth camera. 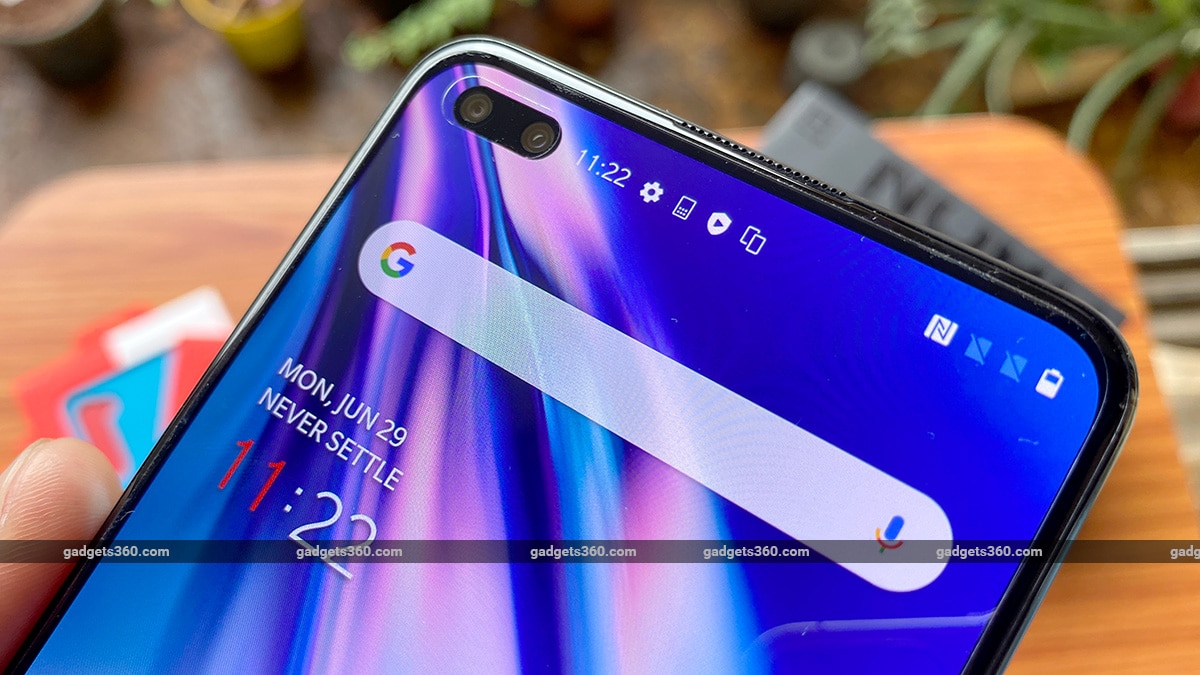 For selfies, you get a 32-megapixel Sony IMX616 sensor, which is the same one used in the Realme X3 SuperZoom (Review). Complementing it is an 8-megapixel wide-angle camera. I'll be testing these over the next couple of days to check how all the sensors stack up. What I find interesting is that the Nord supports up to 4K 60fps recording using the front camera, whereas both the OnePus 8 and 8 Pro can only shoot up to 1080p.

That's it for our brief first look at the new OnePlus Nord. We'll be testing this phone thoroughly over the next couple of days, to bring you a detailed report of its gaming performance, cameras, and battery life in the review.

Further reading: OnePlus, OnePlus Nord, OnePlus Nord price, OnePlus Nord price in India, OnePlus Nord specifications
Roydon Cerejo Email Roydon Roydon Cerejo writes about smartphones and laptops for Gadgets 360, out of Mumbai. He is the Deputy Editor (Reviews) at Gadgets 360. He has frequently written about the smartphone and PC industry and also has an interest in photography. With over a decade of experience covering the consumer technology space, he is also an avid sci-fi movie and TV show geek and is always up for good horror flick. Roydon is available at roydon@gadgets360.com, so please send in your leads and tips. More
Vivo S7 Surfaces Online, Tipped to Debut With an Enhanced Selfie Camera, Lightweight Design
Bose Noise Cancelling Earbuds 700 Surface in YouTube Video, Could Be Officially Launched Soon

product The OnePlus Nord is the company’s long-awaited low-cost model for the mid-tier smartphone segment. I’ve spent some time with the new phone and here are my first impressions of it.