A refinement of a tried and tested formula

Back in April, when most tech companies were postponing new product launches, OnePlus was one of the few that went full-steam ahead and launched its 8-series smartphones. With the India pricing being considerably lower than global prices, many were looking forward to these new phones. Ironically, despite being early to launch, we've still had to wait for more than a month before the first sale, as local manufacturing has been impacted due to the ongoing pandemic.

OnePlus has opened sales of the OnePlus 8 in small batches for the time being, and now that we've finally got our hands on our review device, it's time to take a closer look at it. This is the successor to the OnePlus 7T (Review), and expectedly costs a bit more than last year's model. Unlike with the OnePlus 7 (Review) and 7 Pro (Review) series, the OnePlus 8 shares many design cues with the 8 Pro, which is fair considering that its starting price is above Rs. 40,000.

The packaging is quite attractive, similar to that of the OnePlus 7T series. Inside, you'll see the standard set of accessories. Some of the stickers seem new, and the silicone case now has bold ‘OnePlus' lettering on it. OnePlus still doesn't provide any headphones in the box.

We were surprised at how light the OnePlus 8 felt when we first picked it up. It's only 10g lighter than the OnePlus 7T, but this is quite noticeable. It's also slim, and the curved glass on the front and back makes it very comfortable to grip. It's well-balanced for one-handed use too. One thing that we didn't like was the pre-applied screen protector. It's quite an eyesore as it doesn't cover the front glass edge-to-edge, and grazes against your finger every time you perform a navigation gesture. 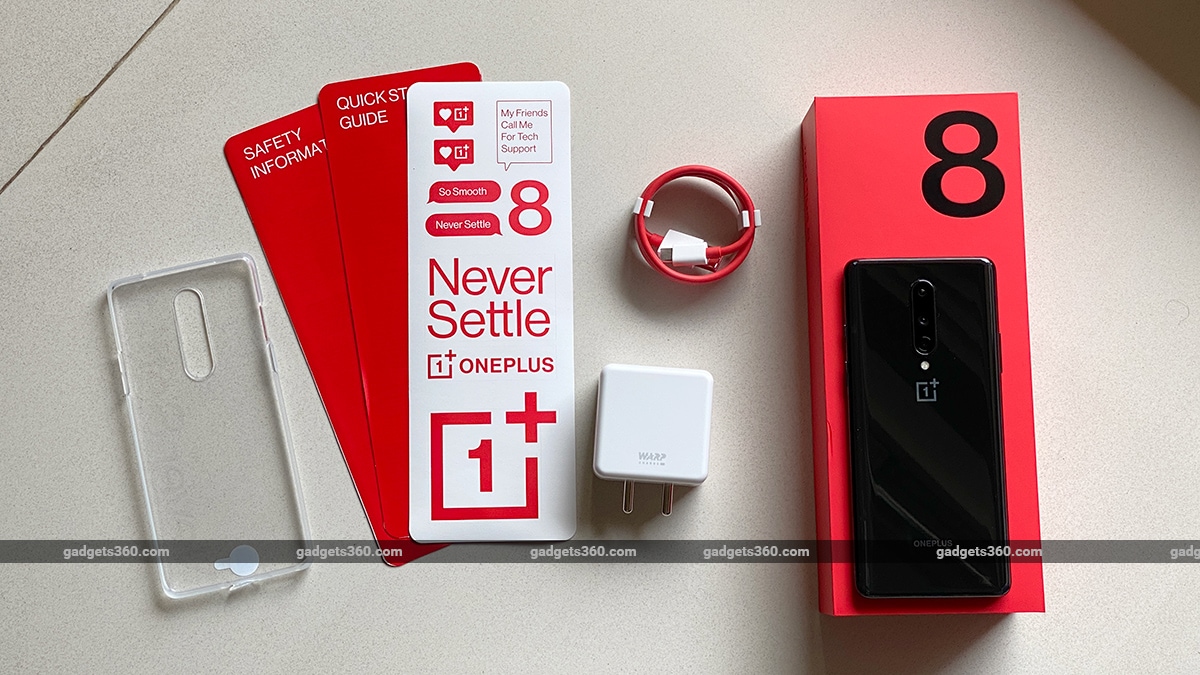 The OnePlus 8 ships with the usual set of accessories

All the buttons and ports on the phone are where you'd expect them to be. There's no headphone jack, but this has been a trend for a while now on OnePlus devices. The OnePlus 8 sold in India doesn't have an official IP rating, however a rubber lining around the SIM tray indicates that it could very well have some degree of water resistance. The Verizon-locked version of the OnePlus 8 sold in the US boasts of an IP68 rating.

The overall design might not be so different from last year's models, but the big change is in the display. OnePlus has embraced hole-punch cutouts, and the one here looks nice. The diameter of the cutout isn't the smallest we've seen but since it's tucked away in the left corner, it hasn't been much of a bother for us.

The display itself is the same size as the OnePlus 7T's, measuring 6.55 inches. It's an AMOLED panel, with a full-HD+ resolution, HDR10+ compatibility, and a refresh rate of 90Hz. OnePlus also brags about the panel's high colour accuracy. From what we've seen so far, the display is definitely bright, with good sunlight legibility and punchy colours. You also get lots of options in the Settings app to tweak the colours to your liking. The OnePlus 8 feels well-made and has a comfortable size

It's been less than two days since we began using the OnePlus 8, and so far, things are looking good. OxygenOS feels snappy, apps load very quickly, and we haven't noticed any heating issues yet. The OnePlus 8 uses the Qualcomm Snapdragon 865 chip, and our test unit is the variant with 12GB of RAM and 256GB of storage. We will be testing a lot of games on this phone, and we'll have a full report on how well the OnePlus 8 handles stress in our full review.

We haven't spoken about this phone's cameras yet, but we're expecting similar performance to what the OnePlus 7T delivered. That's because OnePlus has used more or less the same hardware from that phone on the 8, barring the telephoto camera, which has been swapped for a macro camera. We're not too thrilled about this, given the limited use case for a macro camera.

We will be testing the OnePlus 8 thoroughly in the coming days, so stay tuned for a detailed breakdown of its performance, camera quality and battery life analysis in the full review.

Further reading: OnePlus, OnePlus 8, OnePlus 8 price, OnePlus 8 price in India, OnePlus 8 specifications
Roydon Cerejo Email Roydon
Roydon Cerejo writes about smartphones and laptops for Gadgets 360, out of Mumbai. He is the Deputy Editor (Reviews) at Gadgets 360. He has frequently written about the smartphone and PC industry and also has an interest in photography. With over a decade of experience covering the consumer technology space, he is also an avid sci-fi movie and TV show geek and is always up for good horror flick. Roydon is available at roydon@gadgets360.com, so please send in your leads and tips. More
EU's Breton Signals Tougher Tech Rules as Consultations Begin
OnePlus 8 Pro HD Playback Issue Fix Coming in Late June, Company Reveals