OnePlus likes to be disruptive, both in terms of the products it makes, and the way it sells them. In a price conscious market like India, it’s no surprise the company has managed to make a name for itself rather quickly. Each flagship over the years has consistently offered top-of-the-line components at nearly half the price of the competition, which is what has earned OnePlus its fame.

The OnePlus 2 (Review) didn't quite have that 'wow' factor, to be honest, but the company seemed to have gotten its act together with the OnePlus 3 . We loved the phone when we reviewed it and has been our go-to recommendation when anyone asks what’s good under Rs. 30,000, till now. It was surprising that OnePlus decided to do a mid-cycle refresh of OnePlus 3, which is just five months old. While this was met with cheer from those who were still on the fence, it came as a low blow to all those who had already bought the now-outdated model.

The OnePlus 3T is now on sale at Amazon starting at Rs. 29,999. The differences between the OnePlus 3T and OnePlus 3 aren’t massive on paper and we felt the same the first time we got hold of one. We already know OnePlus 3T is good, but is it worth the premium over its predecessor? We find out.

It’s astonishing how far smartphones have come in terms of craftsmanship, and the OnePlus 3T is another shining example of this. OnePlus 3T body is built from a single block of aluminium, which feels as premium as any flagship built by Samsung, HTC, or Apple. The rounded edges make the OnePlus 3T comfortable to hold. The button placement and tactile feedback is also very good. An Alert Slider on the left can be used to toggle between silent and Do-not-disturb (DnD) modes, each of which can be customised. Sadly, due to this physical slider, you can’t schedule DnD to kick in automatically, which is something we sorely miss.

The 5.5-inch AMOLED display of OnePlus 3T has the same full-HD resolution and Corning Gorilla Glass 4 as the OnePlus 3. Pixel density is high enough to mask any jaggedness around text and icons, which leaves you with sharp images and vivid colours. We found that the ‘Dark’ theme with neon green accents looks best on such a panel. Colour temperature is still on the cooler side, just like with the old model, but you can fix this to an extent in the screen calibration settings. Even with the temperature slider all the way to the ‘Warm’ end, colours still seem a bit off - but it’s not as bad as it was on the OnePlus 3. 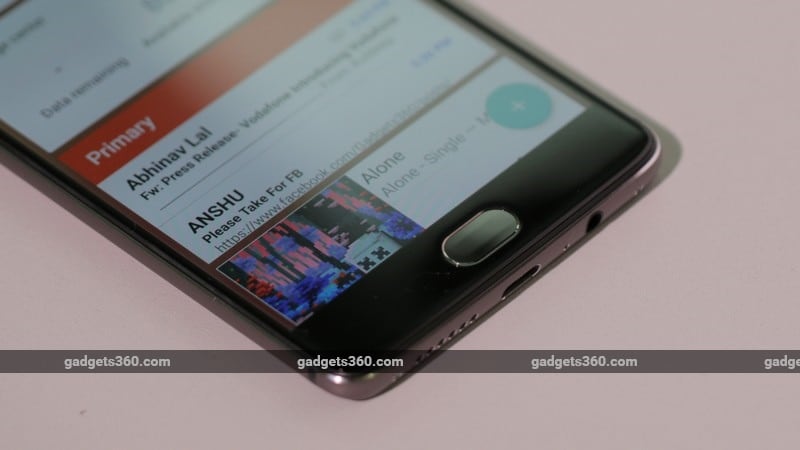 The OnePlus 3T also seems to have a brighter display, which is evident when the two phones are placed side by side. More than colour calibration, it’s the touch latency issue which we found quite annoying. This is most bothersome when typing, and makes the keys on the keyboard feel ‘sticky’. OnePlus 3T also tends to misread some swipe gestures at times, so we would often pull up Google search when we really wanted the notification shade. OnePlus has acknowledged this issue and a fix is supposed to arrive with the Android Nougat update.

OnePlus 3T's fingerprint sensor authenticates you quickly and you can use it to lock apps too. It also doubles as a capacitive home button, and we have two more of these on either side, which are backlit. You can swap their functions or even enable onscreen buttons for navigation, if you like. The machine-drilled holes for the speaker at the bottom add to the phone's premium aesthetics. There’s a Type-C port and a 3.5mm headphone socket on the bottom too.

The gunmetal coloured back adds to the stealthy look of the OnePlus 3T smartphone. The camera bump remains, but you needn’t worry about scratches thanks to the sapphire crystal glass. In the box, you get a 20W power adapter, a Type-C cable, a SIM ejector, and some instructions. The packaging and quality of the accessories are top notch, so no complaints here. Since the dimensions of OnePlus 3T are identical to those of its predecessor, you can use cases and other accessories designed for the older model. 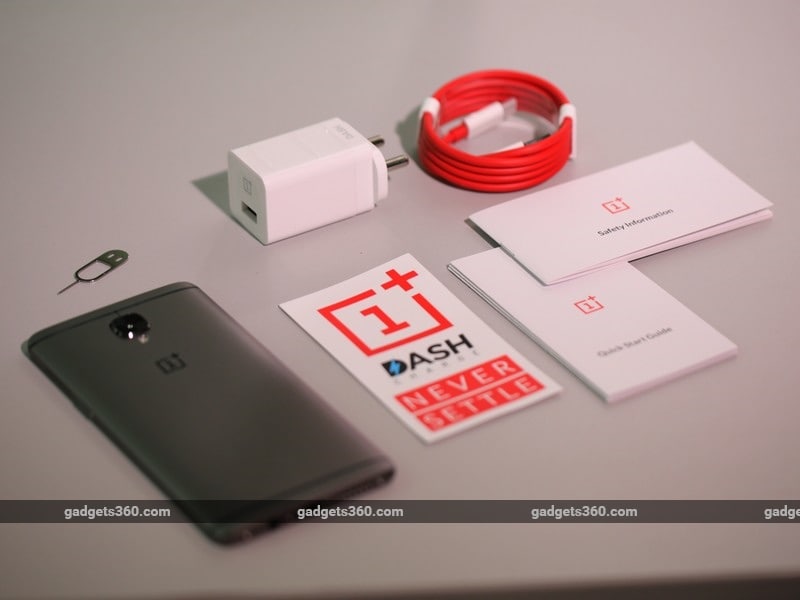 We come to the first big improvement, and that’s the SoC. The OnePlus 3T uses Qualcomm’s newest Snapdragon 821 chip which promises roughly 10 percent better performance in areas like processing power, power consumption, and user experience. There’s 6GB of LPDDR4 RAM and a whopping 128GB of internal storage. The OnePlus 3T model we’re reviewing is the higher priced variant (Rs. 34,999) but you can also get the 3T with 64GB of storage at Rs. 29,999. The smartphone also has improved read and write speeds (at least the 128GB model does) compared to the older model. According to AndroBench results, sequential reads and writes see a 15-20 percent bump but random writes are nearly four times as fast.

Other OnePlus 3T specifications include Wi-Fi 802.11ac, Bluetooth 4.2, USB OTG, NFC, and GPS. FM radio is absent. The phone supports 4G on Indian bands along with VoLTE. The OnePlus 3T runs OxygenOS (3.5.3), which is based on Android Marshmallow 6.0.1. These OnePlus 3T features are pretty similar to what we’ve seen before in the OnePlus 3, just rearranged and redesigned a bit. Swiping right from the home screen lets you access ‘Shelf’, a customisable screen which lets you stack widgets for quick access. Swiping down or up anywhere on the homescreen lets you access the notification shade and Google search, respectively. 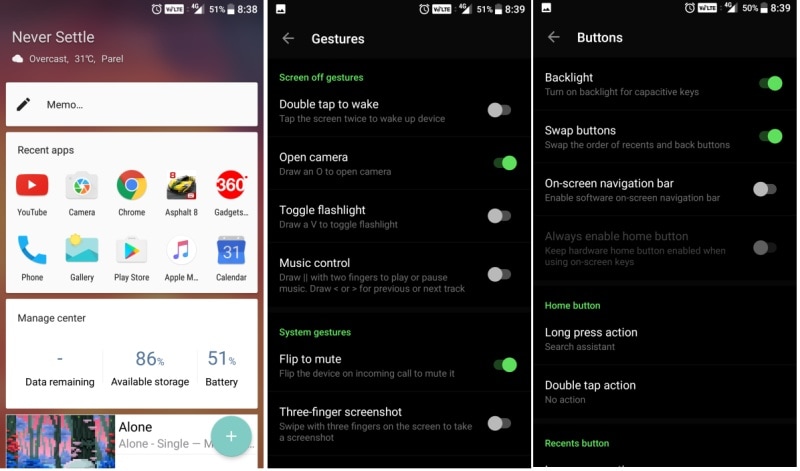 OnePlus 3T's capacitive buttons can pull triple duty, as you can program long-press and double-press actions to each of them in addition to their regular function. The ‘Gestures’ menu lets you play around with various shortcuts. In terms of apps, there’s the OnePlus Community app, Amazon, Kindle, Google suite, and basic apps like a file manager and voice recorder.

The general app and system performance of OnePlus 3T is incredibly fluid as you always have about 4GB of RAM that’s at your disposal. The generous amount of onboard storage also means you never have to worry about running out of space, even if you’re a compulsive media user. The new Qualcomm SoC can run anything your throw at it without breaking a sweat. Heavy games like Asphalt 8 run flawlessly. Even with extended use, the phone doesn’t overheat, which is quite impressive.

The OnePlus 3T flies through benchmarks too. In AnTuTu, we got a score of 1,61,620, and 60fps in GFXbench. The punchy colours of the display make watching videos really enjoyable. The speaker is fairly loud if there isn’t too much ambient noise but isn’t too audible when you’re out and about on the street. The display has good very good sunlight legibility too with wide viewing angles. OnePlus 3T also handles 4K video playback like a champ. If we have one criticism it would be the placement of the speaker grille, which tends to get covered by your palm when gaming or watching a video. 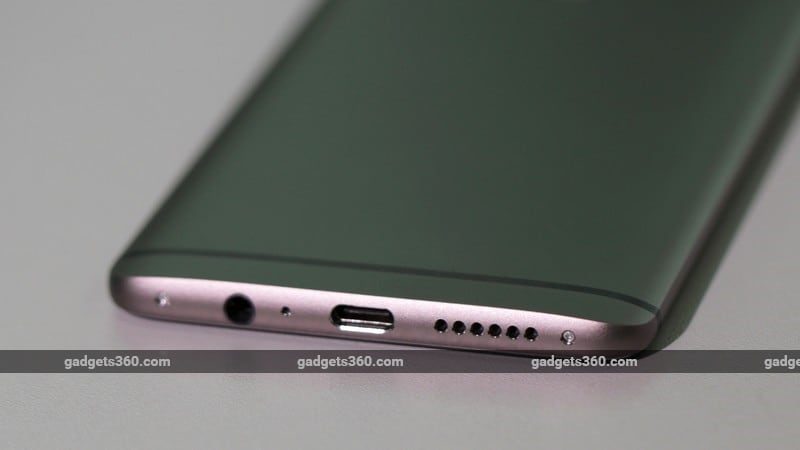 OnePlus 3T's front camera is the second biggest change compared to the OnePlus 3. It now features a 16-megapixel sensor from Samsung, with an f/2.0 aperture and fixed focus. Pictures are incredibly detailed in good lighting and look good under low light too. There’s a bit of visible noise but no colour noise, so pictures are still very usable. Smile capture works well and automatically starts counting down as soon as it detects your smile.

The 16-megapixel rear camera of OnePlus 3T supports PDAF, has an f/2.0 aperture and can capture RAW images. There’s also Optical Image Stabilisation, just like the on the older model. Landscapes and macros are highly detailed with good colour reproduction. There are some visible artifacts from JPEG compression but this is only noticeable when you zoom in all the way. The Auto HDR mode works well and you even have a HQ mode, which combines a few shots of the same frame to reduce noise, which works decently well. 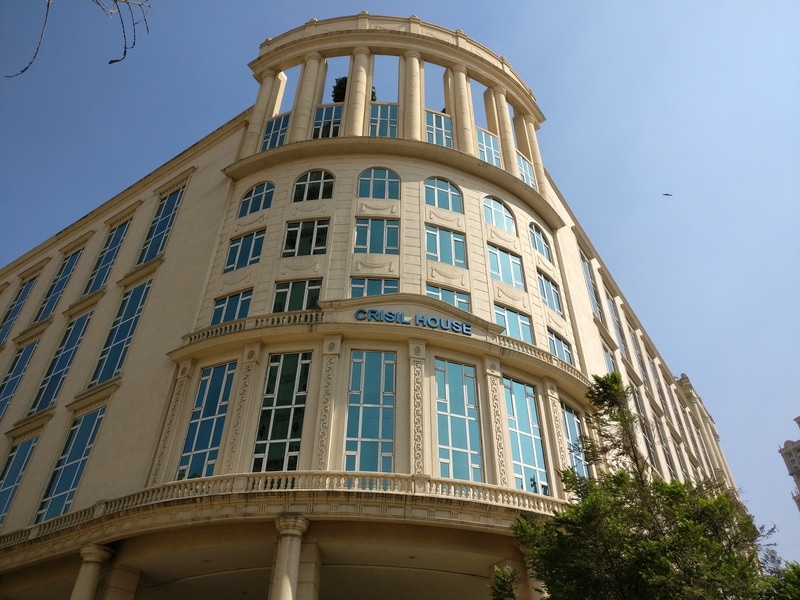 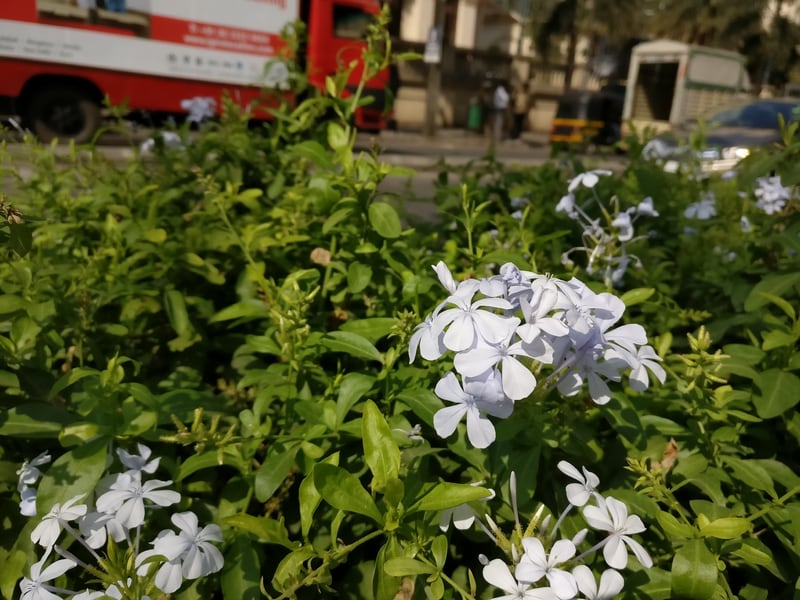 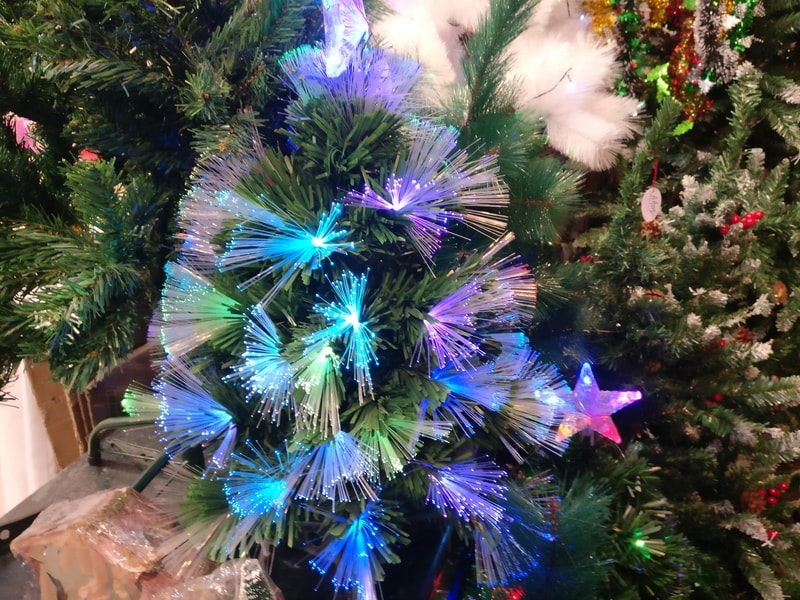 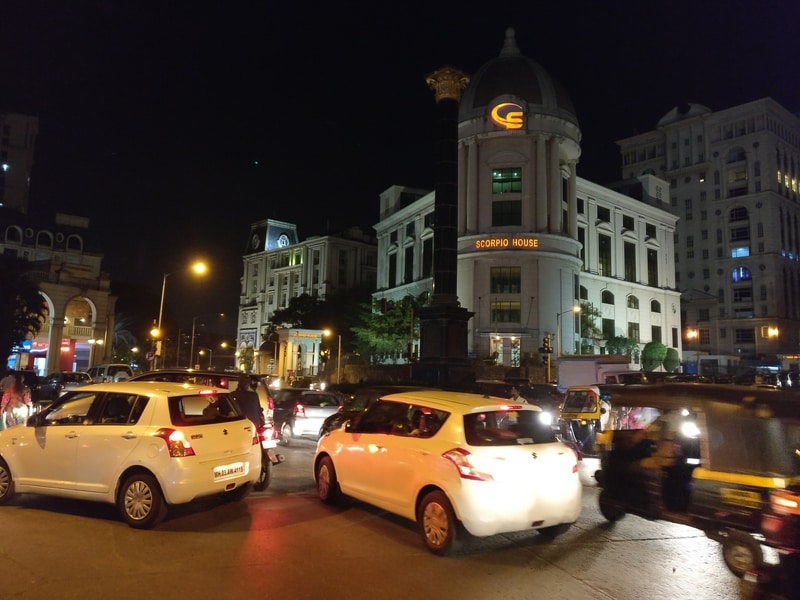 We quite liked the OnePlus 3T camera's low-light performance, as images aren’t too noisy and a fair bit of detail is preserved. Shooting modes include slow-motion video, timelapse, manual and panorama. There’s a 1080p 60fps video mode too which is good for capturing sports and action scenes. Video quality for full-HD and 4K capture was really good.

The third notable change is that the OnePlus 3T has a 3400mAh battery. In our HD video loop test, we managed to go for 14 hours and 3 minutes, which we think is very good. During standard usage, we easily got a day and half, and a bit more at times depending on amount of gaming. OnePlus 3T's Dash charging works brilliantly, achieving a 45 percent charge in just 35 minutes, and finishing up in a little over an hour.

On the surface, the OnePlus 3T might seem like a minor upgrade over the OnePlus 3; the key areas being the battery capacity, higher resolution front camera and the faster CPU. However, after using it for the better part of a week, it's clear that the improvements extend to the brighter and more colour-accurate display, and faster internal storage. The newer firmware also plays a big role in providing a better all-round experience compared to its predecessor.

At its current pricing, you should clearly ignore the OnePlus 3 and spend the extra Rs. 2,000 for the OnePlus 3T, because it’s worth it. We’re not terrible convinced about the pricing for the OnePlus 3T 128GB model as we feel that a Rs. 5,000 premium isn't necessarily worth it. Don’t get us wrong; it’s still very good value even at Rs. 34,999 - but something like a quad-HD screen for this version would have helped sealed the deal nicely.

It’s really difficult to fault the OnePlus 3T as it takes everything its predecessor did well and improves upon it. Low-light camera performance is better and we have no reason to complain about the lack of expandable storage anymore. If we have to nitpick, then the lack of an FM radio might bother some people, and the touch latency issue can get annoying when typing, though OnePlus promises to fix this in the Nougat update.

If you want the best Android experience on a reasonable budget, then the OnePlus 3T is the only phone you need. But then, you already knew that.

Further reading: OnePlus 3T review, OnePlus 3T price, OnePlus 3T price in India, OnePlus 3T features, OnePlus 3T specifications, OnePlus smartphone
Roydon Cerejo Email Roydon Roydon Cerejo writes about smartphones and laptops for Gadgets 360, out of Mumbai. He is the Deputy Editor (Reviews) at Gadgets 360. He has frequently written about the smartphone and PC industry and also has an interest in photography. With over a decade of experience covering the consumer technology space, he is also an avid sci-fi movie and TV show geek and is always up for good horror flick. Roydon is available at roydon@gadgets360.com, so please send in your leads and tips. More
Lenovo Yoga Book, 'World's Thinnest 2-in-1', Launched in India at Rs. 49,990
Uber Employees Secretly Tracked Celebrities, Acquaintances, Claims New Lawsuit