Despite its limited product portfolio, OnePlus has managed to make a mark on the smartphone industry. The Chinese company launched with the OnePlus One (Review) in 2014 and earned positive reactions from users worldwide. The OnePlus 2, launched in 2015, wasn't received as well because of software bugs and fingerprint sensor issues, which we pointed in our review. Then, the more affordable OnePlus X launched last year but wasn't able to impress us as well. Most recently, the OnePlus 3 was launched earlier this year, and set a new benchmark in terms of performance, design, and camera for smartphones at its price level.

The company's flagship OnePlus 3 (Review) has now received a mid-cycle upgrade in the form of the OnePlus 3T which brings some interesting updates. Despite looking exactly like the original, this new model has a faster processor, a higher resolution front camera, a higher capacity battery, and more inbuilt storage. The OnePlus 3T also comes in an all-new Gunmetal colour.

At the India launch of the OnePlus 3T, Vikas Agarwal, General Manager, OnePlus India confirmed to Gadgets 360 that the company will continue to sell the OnePlus 3, though ultimately focus will move to the upgraded OnePlus 3T. We had chance to get a look at the all-new OnePlus 3T for a short amount of time, and here are our initial impressions.

When it comes to design, we had said that OnePlus nailed it with the OnePlus 3. The company used anodized aluminium and ditched the sandstone rear that had become synonymous with the OnePlus One. Thankfully, the OnePlus 3T uses the same design and looks exactly like its sibling. The new Gunmetal colour reminds us of HTC's recent metal-bodied flagships, which is emphasised by the antenna bands running across the back and a protruding camera bump. Moreover, the OnePlus 3T is sturdy and feels light at 158 grams even though the OnePlus 3 has the same dimensions and weight.

The OnePlus 3T features a 5.5-inch full-HD (1080x1920-pixel) display with a density of 401ppi. The company has opted for an Optic Amoled panel and uses Corning Gorilla Glass 4 on top. The display is bright with satisfactory colour reproduction, and viewing angles as well as visibility under bright indoor lighting was good.

The OnePlus 3T runs on OxygenOS, which is based on Android Marshmallow. This means that it offers Android's updated app permissions system, Now On Tap, and Doze Mode features. At the event, Agarwal stressed that the version of OxygenOS on the OnePlus 3T is now more refined. We couldn't check out the UI of the OnePlus 3T in very much detail at the launch event, but you can look forward to our full review.

One of the biggest improvements to the OnePlus 3T is that it packs the upgraded quad-core Qualcomm Snapdragon 821 SoC. Two cores are clocked at 1.6GHz and two at 2.35GHz. There's also integrated Adreno 530 graphics. The phone has 6GB of RAM. To recall, the OnePlus 3 uses the quad-core Qualcomm Snapdragon 820 SoC with Adreno 530 graphics and also 6GB of RAM. In our limited time with the OnePlus 3T, we found that the phone was snappy in terms of speed and responsiveness, while also able to handle multitasking without any lag. We will have to reserve our verdict on the performance of the OnePlus 3T until we get a chance to put it through our detailed review process. 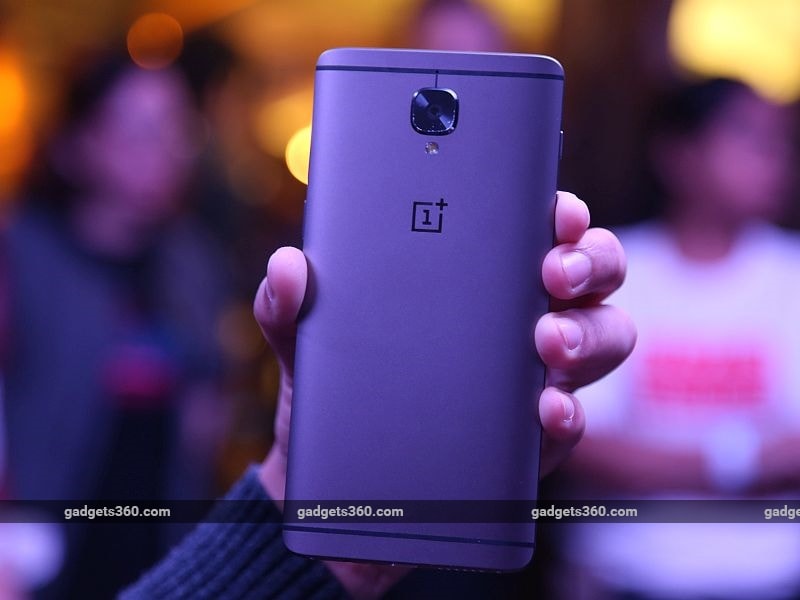 Another major upgrade on the OnePlus 3T is its front camera. The new smartphone sports a 16-megapixel front camera with a Samsung 3P8SP sensor. We took some crisp selfies at the well-lit event venue, and low-light performance was impressive as well. Photos came out with a good amount of detail. The OnePlus 3T has with the same 16-megapixel rear camera as the OnePlus 3, with a Sony IMX298 sensor which is capable of 4K video recording. At the event, OnePlus claimed that the new OnePlus 3T ships with sapphire glass on the rear lens. We managed to get few shots from the rear camera and noticed very minimum noise even in an indoor dim lighting. We'll look into this in more detail soon.

The OnePlus 3T is the company's most expensive offering in India thus far, and will be competing with every other brand's flagship. As of now, the only other phones to feature Qualcomm's Snapdragon 821 processor are the Asus ZenFone 3 Deluxe and Google Pixel (and Pixel XL).

Considering that the OnePlus 3T comes just five months after the launch of the previous flagship OnePlus 3, it's hard to guess what market response will be like. The improvements do make it a great deal for those who are looking for a flagship experience at a relatively low price point.