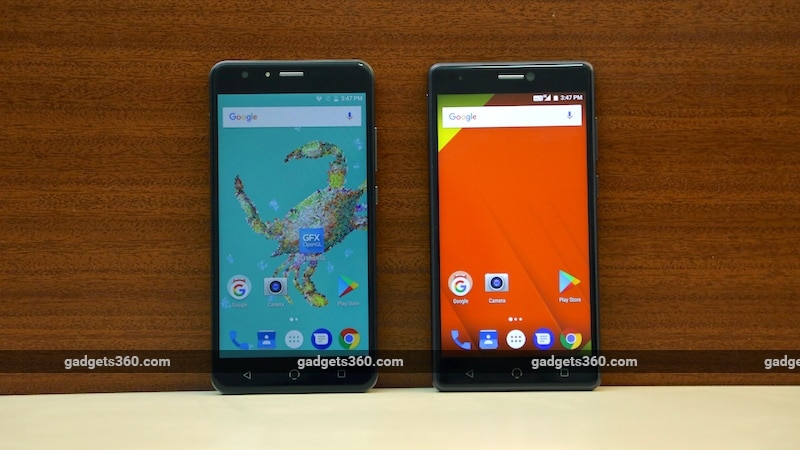 There is no denying that the smartphone market is overcrowded at the moment. The number of companies trying to cash in on this opportunity has gone up significantly over the past few years. While a lot of manufacturers have tried to make their mark, failed and quit the industry, that isn't stopping others from trying. Nuu Mobiles is one such brand that has entered the Indian market to try to make a mark for itself.

Targeted specifically at the offline retail space, Nuu is trying not to compete with online-exclusive brands. However, it is entering the market without an established brand or reputation. Should you consider the Nuu M3 and the Nuu X5 over phones from established companies? We tell you the answer.

The Nuu M3 and the Nuu X5 look similar in terms of design and both have boxy bodies. Both phones sport 5.5-inch displays with capacitive touch buttons below them. They also both have metal backs with plastic caps at the top and bottom. These phones unfortunately don't have curved sides, and as a result, they both feel bulky in the hand. There are metallic earpieces and selfie cameras with flashes next to them. The capacitive touch buttons at the front are not backlit which can get annoying in low-light conditions.

The loudspeakers are positioned at the bottoms, along with Micro-USB ports and the primary microphones. While there are two speaker grills, only one houses a loudspeaker on each phone, while the other is decorative. The power and volume buttons are placed at roughly the same positions, but while the ones on the M3 feel plasticky, the ones on the X5 feel metallic and have a good click to them.

That's as far as the physical similarities between the two models go, and here is what's different. First, the Nuu M3. The corners are rounded so that they don’t dig into your palms during use, but it's still not very comfortable. We found that the SIM tray on our unit would rattle constantly when using the phone. The primary camera is positioned in the upper left corner along with a dual-LED flash. It has a plastic element which is similar to the camera visor of the Huawei P9 (Review). There is no fingerprint sensor, which is surprising considering this phone's launch price of Rs 12,499. The Nuu X5 has a similar metallic back panel with chamfered edges. What is different in comparison to the M3 is that the X5 sports a fingerprint scanner in the centre of the back, which is easy to reach while holding the phone.

This is where we see some differences between the M3 and the X5. The latter is priced higher and as a result gets better hardware. The M3 is powered by a MediaTek MT6737 SoC clocked at 1.25GHz. This is an entry-level processor and is seen in the likes of the Kult Gladiator (Review) and the Videocon Metal Pro 2 (Review). Paired with it is 3GB of RAM. There is 32GB of internal storage out of which around 25GB is available to the user. This is a dual-SIM device and oddly, the SIM 1 slot is the hybrid slot while the SIM 2 slot is a standard Nano-SIM slot. Both slots are capable of 4G and VoLTE but only one can access 4G network at a time.

The 5.5-inch display on the M3 has a resolution of 720x1280 pixels. It has good contrast and viewing angles, though you might find the brightness a little inadequate under direct sunlight. For photography, it sports an 8-megapixel camera at the back and a 5-megapixel selfie camera. Battery capacity comes in at 3200mAh which seems low compared to the likes of the Redmi Note 4 and the Micromax Canvas Evok Power.

On the other hand, the Nuu X5 offers better specifications. It is powered by a MediaTek MT6750T processor, with eight cores clocked at 1.5GHz. There is 3GB of RAM and 32GB of internal storage which is expandable via the hybrid dual-SIM slot. The X5 has one micro-SIM slot and a hybrid nano-SIM slot which can accept cards of up to 128GB. The primary camera on the X5 is a 13-megapixel sensor while the selfie camera is a 5-megapixel one with a wide angle lens. Its 5.5-inch display sports a higher full-HD resolution but it gets a slightly smaller battery, coming in at 2950mAh. It also supports 4G and VoLTE for both SIMs but only one at a time. It has a fingerprint scanner at the back which scans registered fingerprints and unlocks the phone quickly. Both phones have connectivity options like WiFi b/g/n, Bluetooth 4.0, GPS, and Micro-USB.

In terms of software, both phones run on stock Android 7.0 Nougat with only a few apps pre-installed. Nuu has added gesture input options with both phones to let you launch apps quickly. While this feature did work on the Nuu X5, the overall process felt slow. On the other hand, the Nuu M3 fared marginally better with gestures. Stock Android means that you won't have to re-learn where things are. However, there are a few mistakes in the explanation text for features such as the pocket mode on the Nuu M3, which makes it hard to understand. Nuu has installed a service app called Nuu Care which can be used to register complaints with the company directly. The app requires you to register after the intitial setup and keeps prompting you by taking over the screen every 10 seconds until you register, which is highly annoying.

Performance is where the two phones really differ. The Nuu M3 is an entry-level smartphone and performance is only about average. Despite its lower resolution, we liked the display on the M3 for its colour reproduction, but the brightness levels could have been better. While using the phone, it is evident that it is powered by an entry-level processor. At least the 3GB of RAM does help to keep the phone from terminating background apps. While running benchmarks on the M3, it managed to clock 27,654 in Antutu, and 504 and 1,389 in Geekbench's single-core and multi-core tests respectively. GFXBench gave us 10fps. App loading does take a little longer than expected.

The Nuu X5 offers decent performance thanks to a more powerful processor. It isn’t slow but it isn’t exceptional either. It managed to score 42,896 in Antutu, and 610 and 2,547 in Geekbench's single-core and multi-core tests. Playing games on both devices isn’t a problem but the X5 is quicker at loading them, and they run better. The X5 managed to hit 16fps in GFXBench despite its higher screen resolution, making it a better pick over the M3 for gaming.

Battery life also differs. The MT6737 powering the M3 is known to be a frugal processor while the MT6750T is performance-focused. The bigger battery in the M3 helped it manage 8 hours and 49 minutes in our HD video loop test, whereas the X5 could only manage 7 hours and 22 minutes. Both phones will get you through one day with light to medium use, but we saw a higher battery drain while gaming on the Nuu X5. You can also use the inbuilt power saving mode to preserve some battery life when the phone is idle.

Camera performance is also different for the two phones. The X5 gets better optics in the form of a 13-megapixel camera over the 8-megapixel shooter on the M3. Both phones have the same basic camera app but the X5 has an added picture-in-picture mode. Panorama and beautify modes are available on both, and you also get quick toggles for HDR. Photos taken with the M3 aren’t all that great. In daylight, we found that the phone had a bit of an issue getting the exposure right at times, which resulted in images looking brighter. Details weren't great and HDR did result in ghosting. Shots taken in the dark had considerable noise and were lacking details. Selfies were average but the selfie flash helped to some extent in low light.

The X5 delivers some decent photos in comparison. Landscape shots had a good amount of detail but macros weren't that great. We also had issues getting the phone to focus where we wanted it to. Selfies were just average but there's also the selfie flash to help. While the Nuu M3 has is weak for photography, the X5 is average at best.

Nuu is making the M3 and X5 available only through offline retail, with better availability in the northern part of India. The Nuu M3 is currently priced at Rs. 10,999 while the Nuu X5 is priced at Rs. 12,599. At these prices, the Nuu phones struggle to offer good value for money. Thanks to fierce competition you have a lot of options to choose from. If you are looking for an entry-level smartphone you should look at our list of phones under Rs. 10,000. If you have a higher budget then you can consider the Redmi Note 4, Moto G5 Plus or the Lenovo K8 Note.