Share on Facebook Tweet Snapchat Share Reddit Email Comment
The much-awaited Lumia 620 has finally landed in the Indian market. The phone is the most economical Windows Phone 8 smartphone available as of date - at least until the Lumia 520 finds its way to the Indian shores - with Nokia pricing the phone at Rs. 14,999. The phone offers the same software features that the higher priced Lumia 820 and 920, but packs all of them in a compact form factor. We try to find out if you should head to the store to grab this phone.

Build/Design
As we pointed out, the Nokia Lumia 620 sports a compact form factor. However, it's a little thicker compared to the Lumia 610. Like some of the earlier phones of the Lumia product line, the phone is available in multiple colours including Black, White, Yellow, Magenta, Cyan, and Lime Green. The colour is rendered purely by the back cover that wraps around the major part of the phone barring just the front of the phone.

This shell reminds us of Nokia's Xpress-on covers but the company uses a 'dual-shot' technique with the Lumia 620 covers, which helps in creating new colours and textures for this smartphone. What this 'dual shot' actually does is that it casts two layers of polycarbonate, a single base layer and a second colour, in a transparent/ translucent layer, to produce depth effects and secondary colour blends. For example, yellow and cyan are combined to produce a lime green colour. We had a Cyan coloured phone as our review unit. 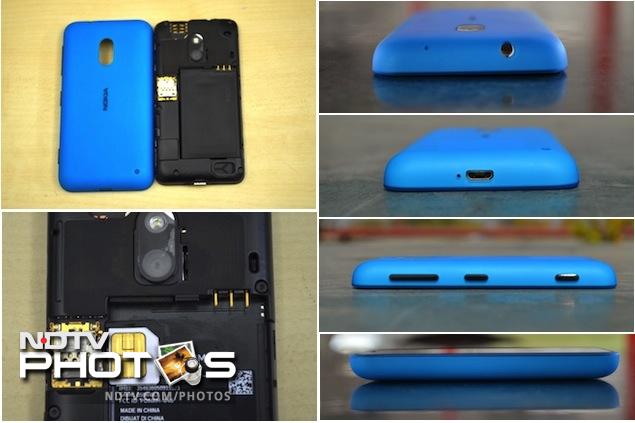 The front of the phone is dominated by the 3.8-inch screen, with the three capacitive Windows Phone buttons - Back, Start and Search sitting below it, while the front camera lens, light and proximity sensors and the earpiece are located above it. There's minimalist Nokia branding on the right. The back features the rear camera lens and the LED flash. There's a small hole for the speaker grill and the grill is located inside it, so it's not on the surface to prevent muffling of sound.

The right side of the phone features a volume rocker, power/ screen lock key, and a camera button, all in black plastic. The keys feel nice and offer good tactile feedback. However, at times our instinctive reaction was to look for the power button towards the upper part of the right side, just where the volume rocker is located. There are no keys or ports at the left side of the phone. The Micro-USB port and the primary microphone are located at the bottom, while the 3.5mm headphone jack and the secondary microphone for noise cancellation sit on the top.

The back cover can be removed by exerting pressure on the camera lens and pulling the cover from the top. Interestingly, the 3.5mm jack is integrated with the cover, which means that you won't be able to use the port if the cover has been removed - hardly a typical use case, but worth pointing out nonetheless.

Removing the cover reveals a battery compartment under which Nokia has also placed a micro-SIM card tray that can be removed with the help of a small plastic extension. We had some issues figuring out the SIM slot when we first got our hands on the phone. At times the plastic extension gets stuck and you have to pull out the tray. It's not that complicated but we feel Nokia could have made it simpler. The microSD card slot is located adjacent to the battery compartment. The cover also features the NFC chip.

Display
The Nokia Lumia 620 sports a 3.8-inch ClearBack LCD with a resolution of 480x800 pixels, and pixel density of 246ppi. We found the screen to be bright and vivid, and viewing angles to be pretty good. Sunlight legibility was also satisfactory, with the screen not being very reflective. The touch is extremely responsive.

Overall, the Nokia Lumia 620 offers a great display, at this price point, and the live tiles, among other user interface elements, look really good on the phone. 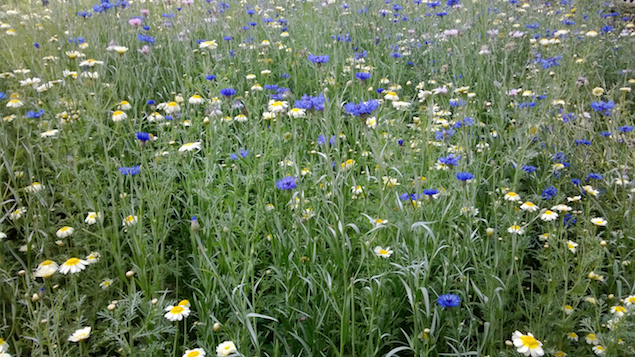 Pictures taken outdoors in good light turned out to be really good for a phone in this price range. Colour reproduction was also satisfactory, with objects appearing close to their true colour. Contrast was also good. We found some noise in photos at full resolution, but overall the quality of photos was good. We also found a minor lag in the shutter timings compared to high-end phones.

Photos taken indoors were a bit grainy in less light but were decent at other times. 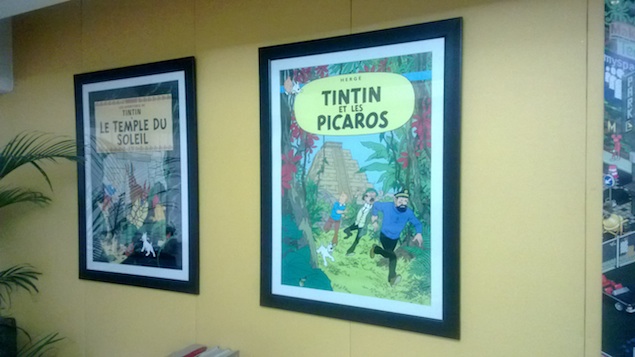 The Lumia 620 also features a VGA front facing camera that does a decent job, and can be used for video chat with apps like Skype or Tango.

The phone's video recorder allows taking 720p videos at 29 frames per second, and we found the videos taken with it to be pretty decent.

User Interface/ Software
The Nokia Lumia 620 comes with Windows Phone 8, the latest iteration of Microsoft's mobile-OS that features multiple improvements like enhanced performance, multi-core processor support, NFC, support for USSD commands, resizable live tiles and more.
Unlike Android, Windows Phone 8 doesn't offer much flexibility to the manufacturer in terms of customising the OS, however Nokia has included a few apps that may well prove to be the differentiator compared to the competing devices. The Lumia 620 comes with several exclusive (and non-exclusive) Nokia apps like HERE Drive+, HERE Maps and Nokia Music, as well as other Nokia apps like Nokia Care and HERE City Lens. We love the HERE Drive app that offers offline navigation complete with turn-by-turn directions. As we mentioned in our previous reviews, Nokia continues to set the benchmark in navigation apps, even ahead of Google Maps. We also love the software keyboard though the phone's small screen makes it a little cramped. 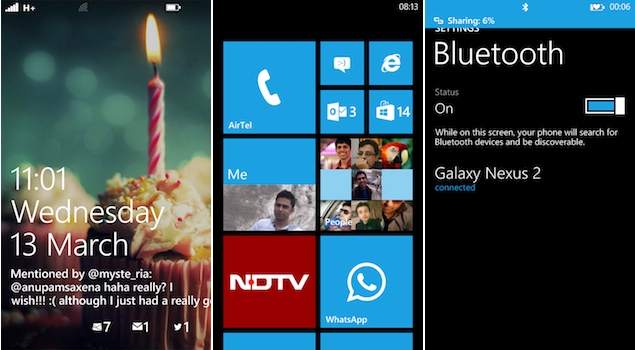 The other services included are HERE Maps, which is a huge improvement over the stock Bing Maps, and Nokia Music, that offers unlimited music free for a year. The exclusive apps make the Lumia 620 a better proposition compared to the HTC 8S.

There are several annoyances with the OS as well. One of the major among them is the lack of quality apps. Many mainstream apps including Instagram, Path, Temple Run and even Pocket are absent from the Windows Store. Another one is the inability to track and re-download previously purchased apps.

Notifications are better compared to Windows Phone 7 but lack of a centralised notification tray/ hub is a pain point. The 'Me tile' tries to fill that gap, at least for social networking needs, but the experience is a little crippled. For instance it's not possible to do a reply all.

The phone leaves out FM radio, though that's one of the limitations of the Windows Phone 8 OS.

Performance/ Battery Life
The Lumia 620 is powered by a 1GHz dual-core Snapdragon S4 processor with 512MB RAM and Adreno 305 Graphics chip. There is 8GB of internal storage, which is expandable by another 64GB via a microSD card. Windows Phone 8 is not a power hungry OS and the hardware has been optimised for good performance. We did not experience any lag at all while launching apps, playing games, scrolling web pages in Internet Explorer or switching between apps.

We were able to play full-HD clips, and all formats including MOV and AVI were natively supported by the phone. The speaker delivers decent quality sound at high volume levels and the loudness is above average. The speaker grill is placed inside a hole at the back; while the sound doesn't get muffled when the phone is placed on a hard surface, it does get affected otherwise.

Playing videos and music through the memory card was really smooth though the phone did take some time to read the card. Windows Phone 8 supports Bluetooth file transfers but we faced some issues transferring large image files from a Galaxy Nexus.  We were not able to transfer files via NFC (tap and send) to the Galaxy Nexus though it did receive NFC tags that were not executable.

The call quality was top notch and the phone was able to easily latch on to the network even in weak signal areas. We were very satisfied with the network reception.

The phone comes with a 1300mAh battery, and though we were a bit concerned with the small capacity of the battery, in our usage, it lasted us more than a full working day. We charged the phone in the morning, and our usage ranged from medium to heavy, including 1-1.5 hours of phone calls, three e-mail accounts with push notifications, playing some music (both on the phone and via Internet radio), Twitter notifications and WhatsApp chats. It's worth pointing out that we had turned off Wi-Fi and auto-brightness, and the phone was hooked to a 3G network with the screen brightness at the highest level. Altering these settings might help in running the phone for a longer duration, depending on your usage pattern.

Verdict
We've been hoping that the release of the Nokia Lumia 620 would disrupt the mid-budget segment, which is currently dominated by Android phones. The phone surely lives up to our expectations as it offers all major smartphone features at a great price point of Rs. 14,999.

Having said that, if you don't mind buying a smartphone from an Indian handset maker and are not too finicky about the build quality, the Micromax Canvas HD and Xolo A1000 offer big screen Android smartphones with great specs. Of course Android has many more apps compared to Windows Phone and offers more customisation. The HTC 8S is another good competitor, in case you're only looking at Windows Phone 8 phones, but the 8S is priced at Rs.18,900 and doesn't offer exclusive apps like Nokia Music or City Lens which are only bundled with Nokia phones. It also lacks NFC and a front facing camera.

Nokia has also announced Lumia 720 and the Lumia 520 at the Mobile World Congress, last month. The Nokia Lumia 520 is a budget phone and will feature interchangeable shells in five colours, while the Lumia 720 is placed in the mid-range segment and promises to deliver a high-end camera performance. Both the phones are expected to launch in Q2 2013 in India. Waiting for the launch of these phones also makes sense if you don't like the Lumia 620.

Overall, the Lumia 620 is the best Windows Phone 8 powered smartphone when it comes to deliver bang for your buck.

product The much-awaited Lumia 620 has finally landed in the Indian market. We try to find out if you should head to the store to grab it.