The Nokia Lumia 1020 is one of Nokia's path breaking products. The company has been focusing on innovation in imaging technology, and the first smartphone to showcase it was the Nokia PureView 808, which was based on the ageing Symbian platform. Nokia decided to abandon Symbian and switch to Windows Phone but it took the company some time to bring the PureView technology to the new platform, despite using the PureView branding with some of the early Lumia Windows Phone-powered devices to highlight their special camera features which included low-light imaging and optical image stabilisation.

The Lumia 1020 is the first Windows Phone smartphone to bring the PureView 808's oversampling technology with its 41-megapixel rear camera. It also includes a Xenon flash which was last seen in the 808. The phone was launched with much fanfare in New York, in July and after almost two months, Nokia has brought the Lumia 1020 to India.

We were able to spend some time with the phone during the launch event and here are our first impressions.

The front of the Lumia 1020 is dominated by a 4.5-inch AMOLED display which features Corning Gorilla Glass 3 protection and Nokia's ClearBack and PureMotion HD+ technology. The display looks crisp and bright with colours appearing to be really vivid. It's worth pointing out that the screen sports a resolution of 768x1280 pixels and pixel density of 334ppi. 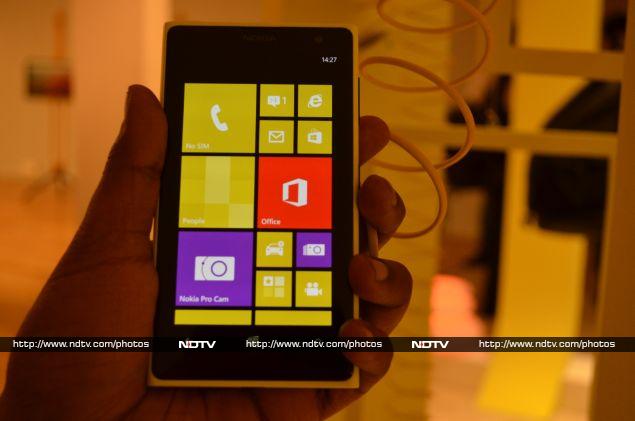 The right side of the Lumia 1020 features three hardware buttons, namely the volume rocker key, the power/screen-lock key and the camera shutter key, all made of plastic. The keys are black in colour, and offer good tactile feedback.

The bottom of the Lumia 1020 features the Micro-USB port and a speaker-grill, while the top houses the 3.5mm headset jack, and the micro-SIM card slot. There are no ports or buttons on the left hand side of the phone.

With the Lumia 1020, Nokia proudly proclaims that the 'rear is the new front,' and that clearly shows on the device. The phone's rear sports a big camera lens at the back that protrudes out. It might feel a bit awkward but we have to keep in mind that this is a camera-focused smartphone. In fact, the camera is the star.

The camera ring is black in colour and features a mechanical shutter, a Xenon flash and an LED light for videos and auto focus assist. After spending some time with it, we have to say that the camera hump on the back is not very obstructing and the phone can be easily carried in a pocket. 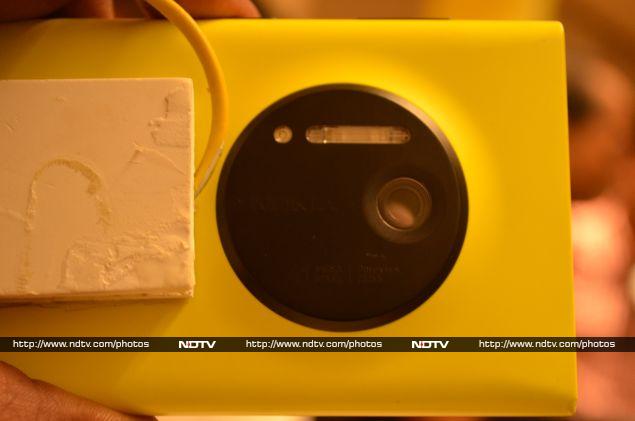 The Lumia 1020 runs Windows Phone 8's Amber build. It features double tap to unlock, FM radio and other features in addition to standard Windows Phone 8 goodies. The phone also offers the Nokia Pro Camera app which has been created specifically for it. The app allows users to tinker with all camera settings just like professional cameras leveraging the power of Lumia 1020's 41-megapixel lens. At the same time, it makes easy for amateurs to take great pictures. We did notice some lag while clicking pictures.

Nokia has announced that the phone will be available starting October 11 and it will announce the pricing a day prior to it. We'll have a detailed review as soon as we get a review unit.