Nokia made a comeback to the smartphone market last year, with brand custodian HMD Global launching a wide range of smartphones across various price points. These smartphones used the typical Nokia build quality to play the nostalgia card very well, and also boasted of decent specifications, stock Android, and quick updates. However, the market is crowded, and as most other smartphones were moving to the 18:9 aspect ratio, last year's Nokia 5, Nokia 6 (Review) and Nokia 8 (Review) looked dated in comparison.

So when HMD Global had an event at MWC this year, people were expecting more from the brand. The company delivered with better specifications at multiple price points, and an updated design for its Nokia 7 Plus. With an 18:9 display, the new 7 Plus is the first Nokia-branded smartphone to follow this trend. HMD Global has also packed in a Qualcomm Snapdragon 660 processor and enrolled into Google’s Android One programme. The smartphone has quickly made its way to India with a price tag of Rs 25,999. At this price, the Nokia 7 Plus looks well-equipped, but is it ready to take down the competition? We put it to the test.

The Nokia 7 Plus stands out from the rest of the Nokia phones that launched this year thanks to its 18:9 display. It curves at the edges, reminding us of the Google Pixel 2 XL (Review). HMD has built the Nokia 7 Plus quite well and has used 6000 series aluminium for its unibody. The edges are rounded off and the back has a ceramic coating to give it a smooth finish and hide the antenna lines. We found the back to be very smooth to the touch but did not find it slippery.

In order to make the Nokia 7 Plus look distinct, the company has opted for copper accents for the midframe, camera surround, fingerprint scanner, and its logo at the back of both the white and black options. Pick the phone up, and its heft is immediately noticeable, making this device feel solidly built. HMD Global has opted for a 3800mAh non-removable battery on the Nokia 7 Plus which contributes to the weight of this phone. It sports a USB Type-C port at the bottom, alongside the primary microphone and a speaker grille. While the speaker can get loud, the grille is tiny and is easy to muffle accidentally. There's still a 3.5mm headphone jack, and you get in-ear headphones in the box. The metallic buttons on the side are clicky and offer good feedback. HMD Global has opted for a hybrid dual-SIM tray, so one Nano-SIM can be swapped for a microSD card.

At the back, the Nokia 7 Plus sports dual cameras with Zeiss branding. The camera module protrudes a little but the copper trim should help protect the lenses from picking up scratches. The phone also has a dual-tone LED flash.

Nokia 7 Plus specifications and software

HMD Global took a conservative approach with most of its lineup last year in terms of hardware, and faced some criticism as a result. The company told Gadgets 360 that it has taken that feedback and made improvements to its new offerings. The Nokia 7 Plus, in fact, is one of the first smartphones in India to use the Qualcomm Snapdragon 660 processor, which has eight cores, with four clocked at 1.8GHz and the other four clocked at 2.2GHz. These are Kryo 260 cores that are manufactured on the 14nm FinFET process, with an integrated Adreno 512 graphics processor. The phone also has 4GB of RAM and 64GB of internal storage, which is expandable with a microSD card of up to 256GB in the hybrid dual-SIM tray.

The 6-inch IPS display sports a Full HD+ resolution and has Gorilla Glass 3 for protection. It has good viewing angles and gets bright enough to be visible outdoors. Other specifications on the Nokia 7 Plus include Bluetooth 5, Wi-Fi 802.11ac, GPS, GLONASS, and NFC. It also features an ambient light sensor, proximity sensor, gyroscope, hall sensor, and an e-compass. There is support for 4G and VoLTE on the primary SIM, while the second SIM is restricted to 3G and 2G networks. 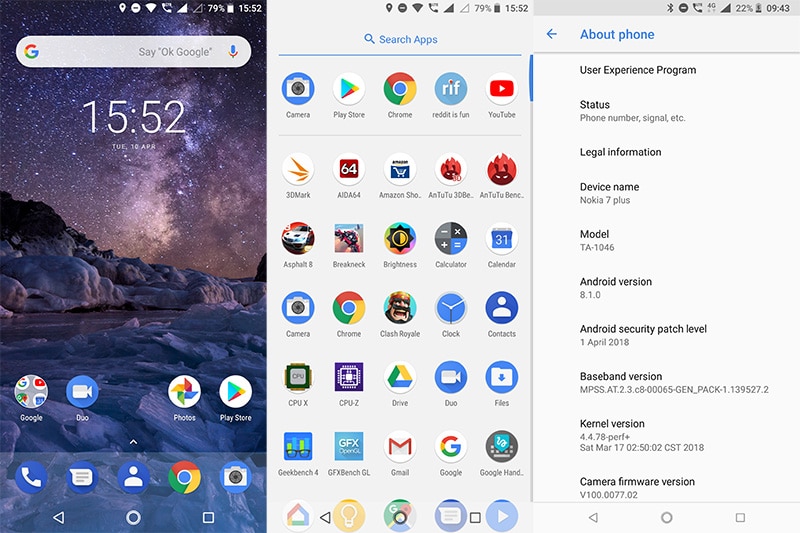 Software is where the 7 Plus gets even more interesting, as HMD has gone with Google’s Android One programme for its entire 2018 lineup. What this means is that the phone comes with stock Android and no bloatware. Our review unit was running Android 8.0 Oreo with the February security patch, and was updated to Android 8.1 Oreo with the April security patch within the test period. With no significant customisations on the Nokia 7 Plus, the UI is snappy and easy to use.

There are a few gesture shortcuts, like the ability to double-click the power button to launch the camera, use the fingerprint scanner to pull down the notification shade, and lift to wake phone, among others. You also have the option to double-tap the display to wake the device up.

The Nokia 7 Plus packs in good hardware at its price point. The Snapdragon 660 has a lot of grunt and can outperform the Snapdragon 625/626 processors. It also performed better in our benchmarks than the Snapdragon 630 which powers the Moto X4 (Review) and the Helio P60 in the Oppo F7 (Review). The Nokia 7 Plus can handle your daily grind and deliver a smooth user experience without breaking into a sweat.

The fingerprint scanner is positioned slightly too high for our liking, and we needed to stretch a little to use it. It is reasonably fast but we have seen better in this segment. Heavy apps and games are handled well, and the Nokia 7 Plus also managed to sail through in our gaming tests. We played Asphalt 8 and Clash Royale, and even used it for navigating around town with GPS, and found that the phone could handle these tasks without heating up.

In our benchmark tests, the phone returned 137,573 in AnTuTu, 1,590 and 5,780 respectively in Geekbench's single-core and multi-core tests. It also did quite well in graphics benchmarks, with 48fps in GFXbench's T-Rex test and 14fps in Manhattan 3.1. 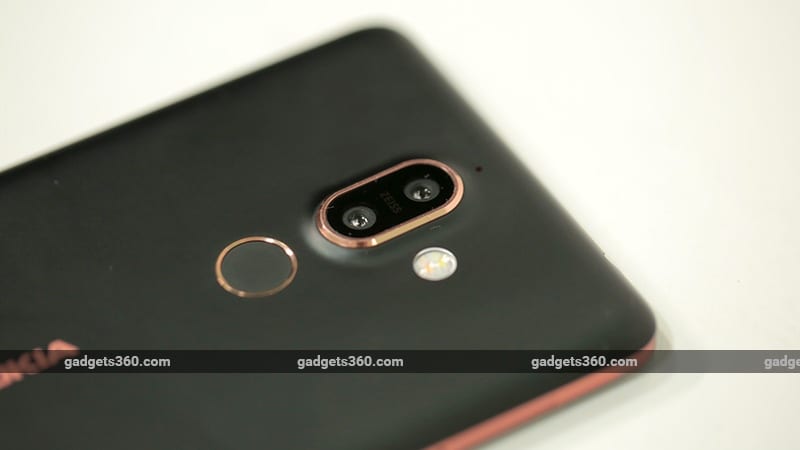 Battery performance is very good and we found that idle drain was quite low. In our HD video loop test, the smartphone managed 13 hours and 31 minutes and we could end the day with some juice left in the tank. If you aren’t into heavy games and your usage is restricted to messaging apps and social media, we reckon the phone can last you well over a day before needing to be plugged in. When the battery finally does run out, the bundled charger is capable of filling it up to 100 percent in two hours.

Nokia smartphones in 2017 didn’t exactly have stellar cameras. Even the flagship Nokia 8 fell short in terms of camera performance. The company seems to have worked hard on fine-tuning its new lineup and the results are evident.

Starting with the camera app, HMD has kept things simple, but it isn’t completely stock. There are options for HDR, beautification, and Bothie feature which lets you take shots using both the front and rear cameras simultaneously. This feature is quite handy for capturing events with your reactions in the same frame. You can use it for vlogging, and HMD has even added a live mode that lets you stream content directly to Facebook or YouTube. There are three microphones on board along with Nokia’s OZO Audio technology which lets you capture surround audio while recording video.

When taking photos with the Nokia 7 Plus, we found that it was quick to focus and got the exposure right most of the time. In daylight, the phone managed to capture good amounts of detail. Colour reproduction was quite good and most images appeared crisp. The telephoto lens offers a quick 2x optical zoom, while the phone can also do up to 10x digital zoom. This is handy when you want to capture distant objects, but we found that the secondary sensor has a slightly cooler colour temperature in comparison to the primary one. If you like taking portraits, you will enjoy the bokeh mode. It uses the telephoto lens to blur out the background, and edge detection is quite good. 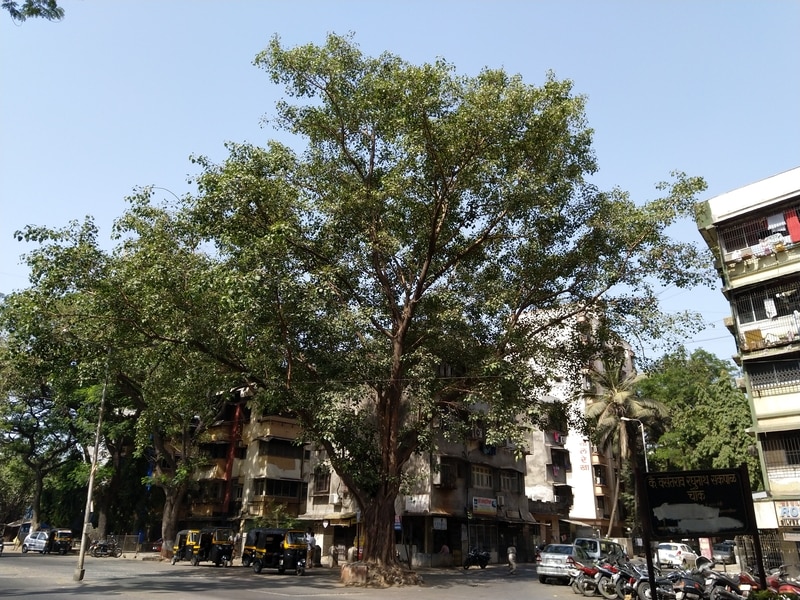 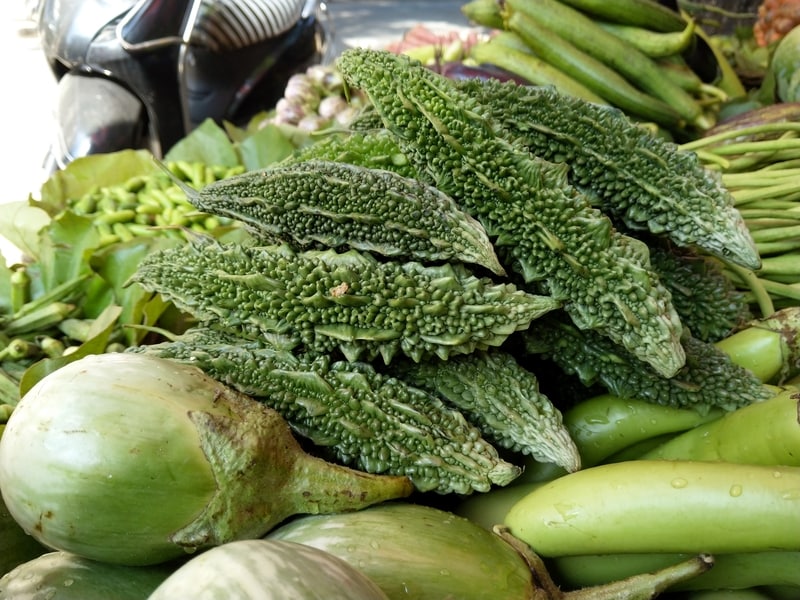 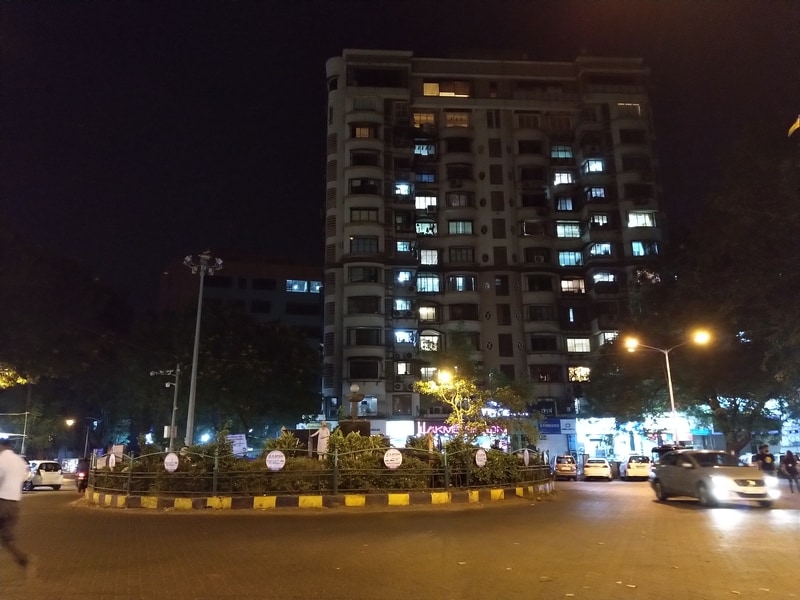 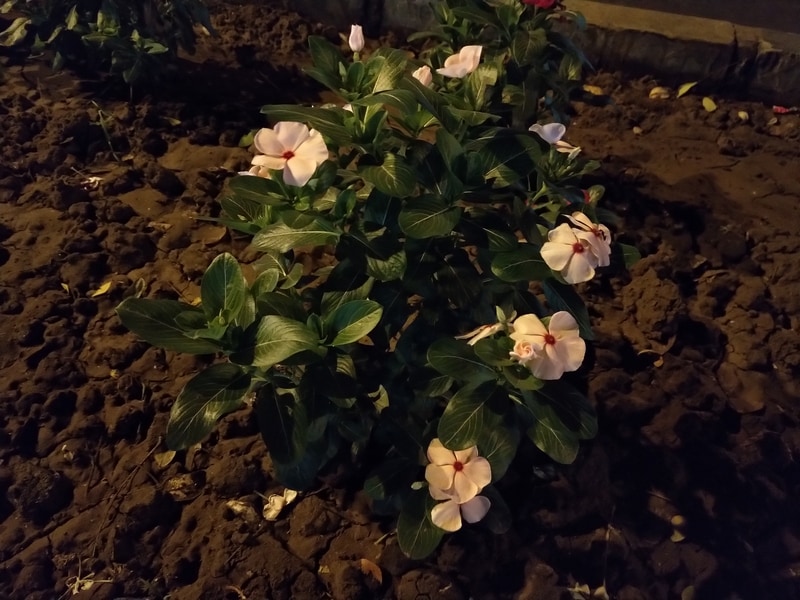 Low light shots were decent, but fine grain was visible in the output when we zoomed in. The phone uses a slower shutter to capture brighter images and keep noise under control. As a result, you will need a steady hand when shooting in low light. Auto mode aside, the 7 Plus does offer a pro mode that lets you alter the white balance, ISO, shutter speed, and exposure.

The selfie camera is good and captures detail quite well when indoors. There's a beautification mode which smoothens faces, and you have a slider to adjust the level. Video recording maxes out at 4K for the primary camera, while the selfie camera maxes out at 1080p. While 4K footage did have a few shakes, 1080p video was stabilised. Nokia 7 Plus in pictures

Verdict
HMD Global has managed to get quite a few things right with the 7 Plus. It is up-to-date with an 18:9 display and feels like it is built to last. The company has also managed to get the right balance of performance and efficiency. The processor is powerful, yet frugal enough to get you through the day without the battery needing to be recharged. As a part of the Android One programme, the device is guaranteed to get quick software updates and security patches. However, the camera could do with some fine-tuning to improve low-light performance.

There are very few recently launched models in this price range, most notably the 6GB RAM variant of the Oppo F7 (Review), so there isn’t a whole lot of competition. However, the biggest threat to the Nokia 7 Plus is from last year’s premium phones such as the Nokia 8 (Review), Honor 8 Pro (Review), and the LG G6 (Review), which offer strong hardware at lower prices than they were launched at.