Nokia 7 Plus sports a 6-inch display with 18:9 aspect ratio

Nokia launched five new phones the day before MWC 2018 officially kicked off, ranging from a low-cost feature phone to a super-slim flagship. Sitting somewhere in between, the new Nokia 7 Plus would be easy to overlook, but this phone has one of the most interesting combinations of features and design.

For starters, the Nokia 7 Plus has a 6-inch 18:9 screen which stretches across most of the front of the phone, which immediately grabs attention. According to Nokia, the Corning Gorilla Glass on the front has been sculpted, though it doesn't really look much different from how other phones combine glass and metal. Nokia has used 6000 series aluminium for the body, but also says that it has a "ceramic-feel coating" which we wouldn't really have noticed had it not been pointed out to us.

The Nokia 7 Plus was displayed at HMD Global's event space in Barcelona in both black and white. Similar to the Nokia 6 (2018), there are bronze-copper accents around the border of the device as well as the buttons, camera bump, and fingerprint sensor. It's a look that calls for attention, and while some might like that, we would have preferred a subtler style.

It's fairly easy to hold and use the new Nokia 7 Plus, and we didn't have any complaints about its physical design. Nokia doesn't quite achieve a borderless look, and the company clearly decided to slap its name on the front rather than go for a clean look. However, the ratio of screen to body still makes this phone look modern.

The camera bump at the rear is fairly pronounced, which brings us to Nokia's next talking point. Carrying forward the legacy of its association with Zeiss, HMD Global has given the new Nokia 7 Plus dual rear cameras. One of them has a 12-megapixel sensor and f/1.7 aperture, while the other has a 13-megapixel sensor and f/2.6 aperture. The front-facing 16-megapixel camera also gets Zeiss optics in this model, unlike with the Nokia 6 (2018). There's a Pro Camera mode which takes us back to some of Nokia's most-loved camera phones from years past, with the same ring-style interface for controls including ISO, white balance, shutter speed, exposure compensation, and manual focusing. 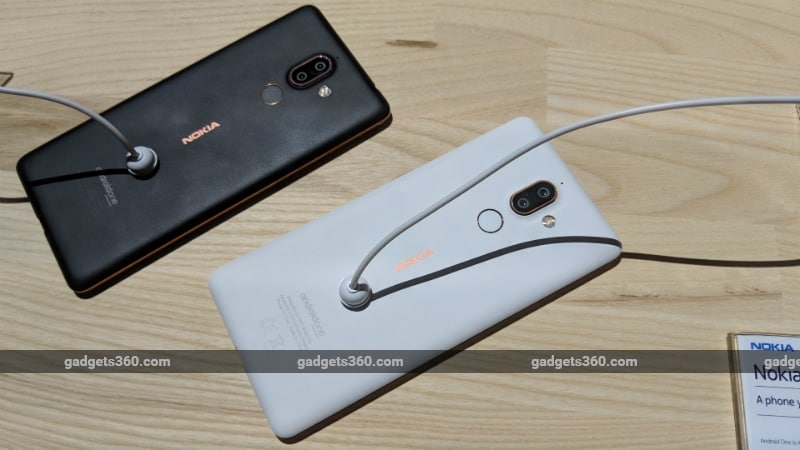 The phone's software is pretty much pure Android, and Nokia has decided to go all-in on Android One, which means that even our demo units were all running Android 8.1 with the security up to date with patches up to February 2018.

The Nokia 7 Plus demo units we were able to spend some time with felt fairly snappy, but without lots of apps to run and with limited time, we can't comment much about performance. The Qualcomm Snapdragon 660 SoC and 4GB of RAM should go a long way in ensuring decent performance, but we don't yet know which other phones HMD Global will price the Nokia 7 Plus against. There's also 64GB of storage and support for microSD cards. Nokia might launch single-SIM and dual-SIM versions of this phone in different countries. The battery capacity is 3800mAh, which Nokia claims should last two days, and there's support for quick charging.

Nokia 7 Plus vs Nokia 7: What's New and Different?

All in all, there's a lot to like about this phone. We think that a lot of people will be drawn to its features and capabilities, as well as its build quality. We're not too sure whether the colour schemes will go down well once buyers see both options in person, and of course pricing will be a huge factor. The Nokia 7 Plus is scheduled to launch in India in end-May/ June.