HMD Global seems to be very proud of last year’s Nokia 6 (Review), calling it “an instant success”, “an icon”, and “the ultimate expression of Nokia craftsmanship and build quality”. Those statements were made at this year’s pre-MWC 2018 press conference, moments before the unveiling of its successor, the new Nokia 6 (2018), because the company has even higher hopes for this new model. We went hands-on with the new Nokia 6 (2018) at the mega expo in Barcelona, and here are our first impressions.

The frame of the Nokia 6 (2018) is milled from a single block of aluminium and there’s a metal plate inside for added rigidity. We were able to spend some time with it just after a bunch of Nokia mobiles were announced in Barcelona on Sunday, and our very first thought was that this phone is absolutely solid. The new Nokia 6 is thick and chunky at 8.6mm thick, with unapologetically straight lines, unlike so many other products today that try to appear organically curved and moulded. Still, it feels fine in the hand, and we didn’t feel any discomfort when playing around with it.

We saw three Nokia 6 (2018) colour options at the launch event – silver, blue, and black. All of them had a distinct copper-bronze accent on the borders and around the buttons and camera bump, and not everyone will like this because it demands attention. We would have preferred at least one neutral colour option.

Nokia could lose a few buyers because the new Nokia 6 (2018)’s 16:9 screen. While there’s nothing wrong with it, competitors have already moved to 18:9 at every price point, which could make this phone feel dated. In the dimly lit event space in Barcelona, we found the quality screen to be adequate, and the full-HD resolution at 5.5 inches was perfectly fine.

The biggest problem with last year’s Nokia 6 was that it felt overpriced and underpowered compared to many other manufacturers’ options at the same price level. The Qualcomm Snapdragon 630 platform used by the new Nokia 6 (2018) is certainly a step up from last year’s Snapdragon 430, and the phone’s UI felt fluid in our brief time using the device. That could be in part because of Nokia’s adoption of the Android One software platform. Our demo unit was running Android 8.1 with the security patched right up to February 2018, which gives us great faith that future updates will arrive frequently. 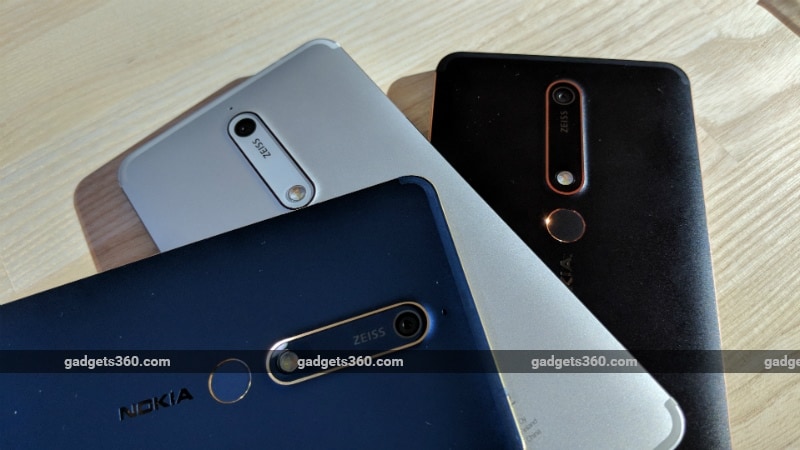 Nokia 6 (2018) comes in three colour options - silver, black, and blue, and all 3 with copper-bronze accent

Nokia 6 (2018) has been listed as having either 3GB or 4GB of RAM, and either 32GB or 64GB of storage. HMD Global India Vice President Ajey Mehta has said the 3GB RAM + 32GB storage variant will likely be launched in India around end-May/June in the Indian market. We’ll be keeping a close eye on pricing here, which will determine whether this new version will face the same criticisms. We’ll also be testing performance with great interest when this phone launches in India.

On the rear of the phone is a 16-megapixel camera with Zeiss optics, an f/2.0 aperture, and a dual-tone flash. The 8-megapixel front camera doesn’t have the benefit of the Zeiss name. Video recording goes up to 4K. We look forward to testing the cameras thoroughly.

The new Nokia 6 (2018) has much more of a personality than the original. We do hope that the company will be aggressive with pricing, and we look forward to the India launch. Stay tuned to Gadgets 360 for our full review covering camera quality, battery life, display quality, real-world performance, and more.