Can H-Log video recording help this phone stand out?

HMD Global has given us some memorable Nokia smartphones in the past. The Nokia 5.1 Plus, Nokia 7.2, and Nokia 8.1, are just some of the standout offerings that come to mind. Of late, the company has been expanding its affordable range with the Nokia 2.4, Nokia C3, and Nokia 5.3, but none of these have managed to truly impress us as much as the models that came before them.

The company's latest launch is the Nokia 5.4, which succeeds the Nokia 5.3. HMD Global is pitching this to content creators who want “cinema-grade” camera tools without having to spend a whole lot. The Nokia 5.4 starts at Rs. 13,999 in India, which is a highly competitive price point. Does it have enough features to stand out? Let's first take a look at the different options that are available in India.

I've already gone over the design and build quality aspects of this phone in my first impressions, so we'll jump straight into the performance of the Nokia 5.4.

Up until recently, entry-level Nokia smartphones haven't offered the best user experience thanks to underpowered processors, in my opinion. The Nokia 5.4 however sits in a higher price segment and features the more powerful Qualcomm Snapdragon 662 SoC, similar to the Poco M3 (Review). While the usage experience is better compared to, say, a Nokia 2.3, it's still not as smooth as it should be for a phone at this price. Just waking up the phone using the fingerprint sensor or face recognition feels lethargic.

Swiping through homescreens and switching between apps does not feel snappy either, which is puzzling considering that Android does not get leaner than the completely stock UI that HMD Global uses. Maybe it's the fact that there's only 4GB of RAM or just a lack of proper optimisation, but either way, it could have been better.

Then there's the display. The 6.39-inch panel has decent viewing angles, and colour reproduction is adequate. Watching videos is generally a pleasant experience too, but the display resolution is just HD+, which is disappointing for a phone costing nearly Rs. 14,000. Granted, this shouldn't affect day-to-day use too much. I didn't face any issues reading text on Web pages, and icons and other UI elements don't have very noticeable jagged edges. However, the maximum brightness level is on the lower side, which makes this display a bit hard to use under direct sunlight. 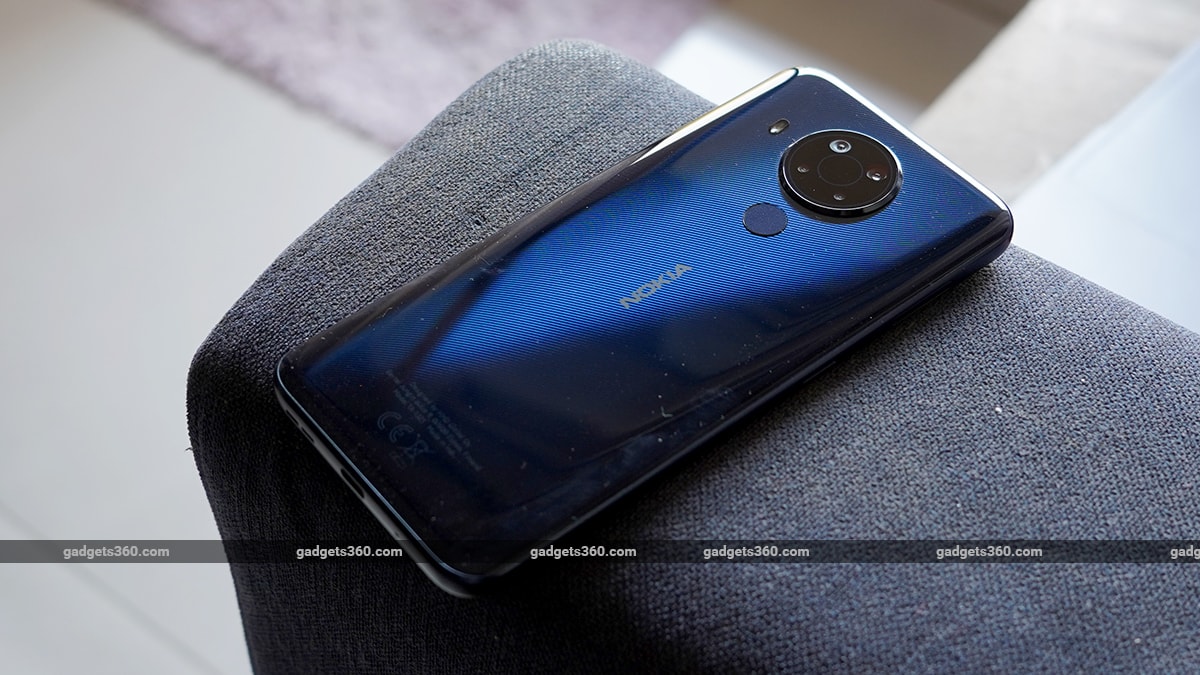 The 4GB version of the Nokia 5.4 doesn't offer the smoothest Android experience, even without any heavy skin or bloatware

The Snapdragon 662 performed well in benchmarks. In fact, I managed to record slightly higher benchmark scores compared to the Poco M3, which also has the same SoC. Simple games such as Ninja Arashi 2 ran well without any heating, but heavier titles such as Call of Duty: Mobile caused the back of the phone to get hot, even though the game was playable. The single speaker at the bottom gets loud enough for media playback. The bundled wired headset is of poor quality so I wouldn't recommend using it.

The Nokia 5.4 has a dedicated slot for a microSD card (up to 512GB). It also supports dual 4G VoLTE, single-band Wi-Fi n, Bluetooth 4.2, and basic sensors. Once again, at this price point I would have liked to see dual-band Wi-Fi and Bluetooth 5 at the very least. The phone is also missing a built-in compass, which means apps such as Google Maps won't show you the direction you're facing. FM radio is present, and uses a wired headset as the antenna.

Software is one area that is hard to find fault with on Nokia smartphones. It's stock Android 10 with just Google's suite of apps, a support app from HMD Global, and a Cinema editor extension in the Google Photos app for colour grading H-Log videos . An Android 11 update is expected to roll out soon. While I'm all for a lean-mean Android machine, I do miss some of the creature comforts that third-party skins provide, such as scrollable screenshots and even a game mode. I realised the need for the latter feature when the brightness kept changing when gaming on the Nokia 5.4, because my thumb kept blocking the ambient light sensor. It's little things like these that we take for granted now and I think it's high time HMD Global begins adding them.

One big thing going in the Nokia 5.4's favour is the promise of guaranteed updates for Android (up to two years) and security patches (up to three years). The rest of the software experience is business as usual. The Google Assistant button lets you issue commands, take notes, etc, with a single press, and the dialler app features built-in call recording too. 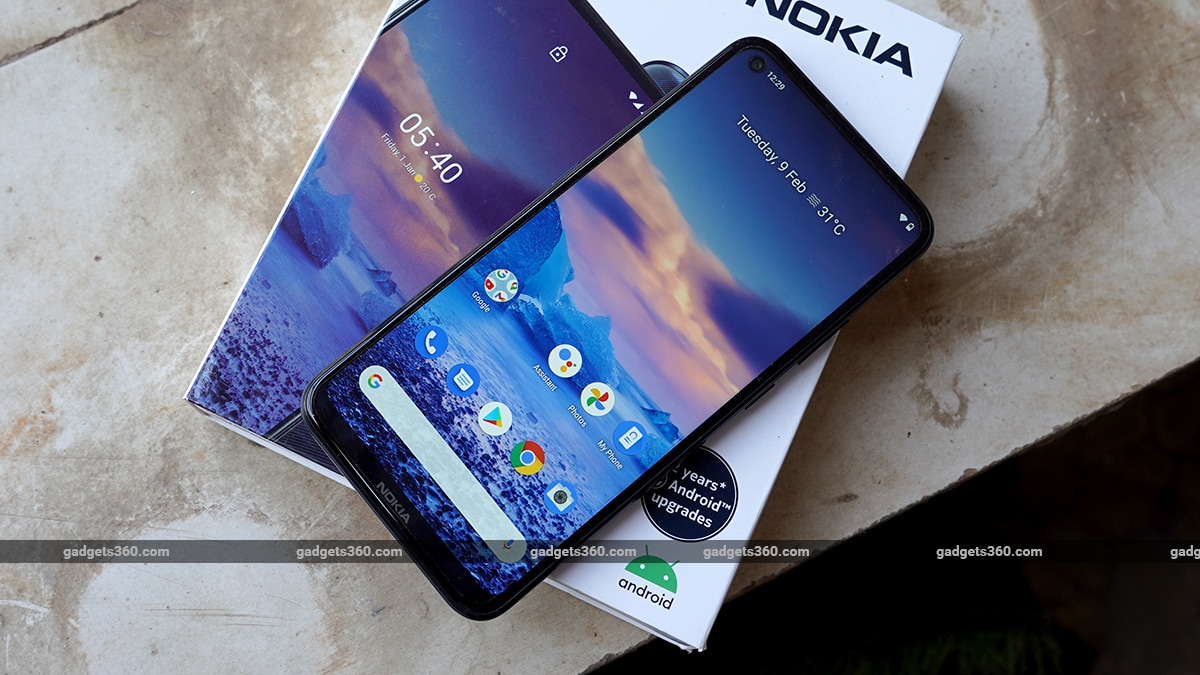 The battery life of the Nokia 5.4 is not bad, provided your usage is not too heavy

The Nokia 5.4 has a 4,000mAh battery, which I found to be enough to get me through one full day of heavy use, and even the next day if my usage was frugal. Gaming and watching videos definitely drains the battery a lot quicker, in my experience. This phone did fare quite poorly in our HD video battery loop test running for just 9 hours and 21 minutes, which is well below average. Charging the battery is not the quickest either. With the bundled 10W adapter and even with any standard high-wattage Type-C adapter, I was able to get only about a 55 percent charge after an hour.

HMD Global is making a big deal about the Nokia 5.4's ability to shoot H-Log video, which to be fair, no competitor in this segment is offering. This video format essentially gives you a flat colour profile, so you can colour-grade footage later in professional post-production software as per your liking. This feature isn't commonly seen in stock phone camera apps, but some paid video recording apps such as Filmic Pro do offer it.

In order to take advantage of the H-Log format, you'll have to switch to ‘Cinema' shooting mode. Unfortunately, you can only shoot in the cinema aspect ratio of 21:9 (1920x822) at 24fps. Within this mode, you'll need to go into the settings and enable H-Log format. In the viewfinder, you have the option to manually adjust white balance, exposure, focus, and ISO, either before or while you are recording. H-Log recording is available for the ultra-wide angle camera too. 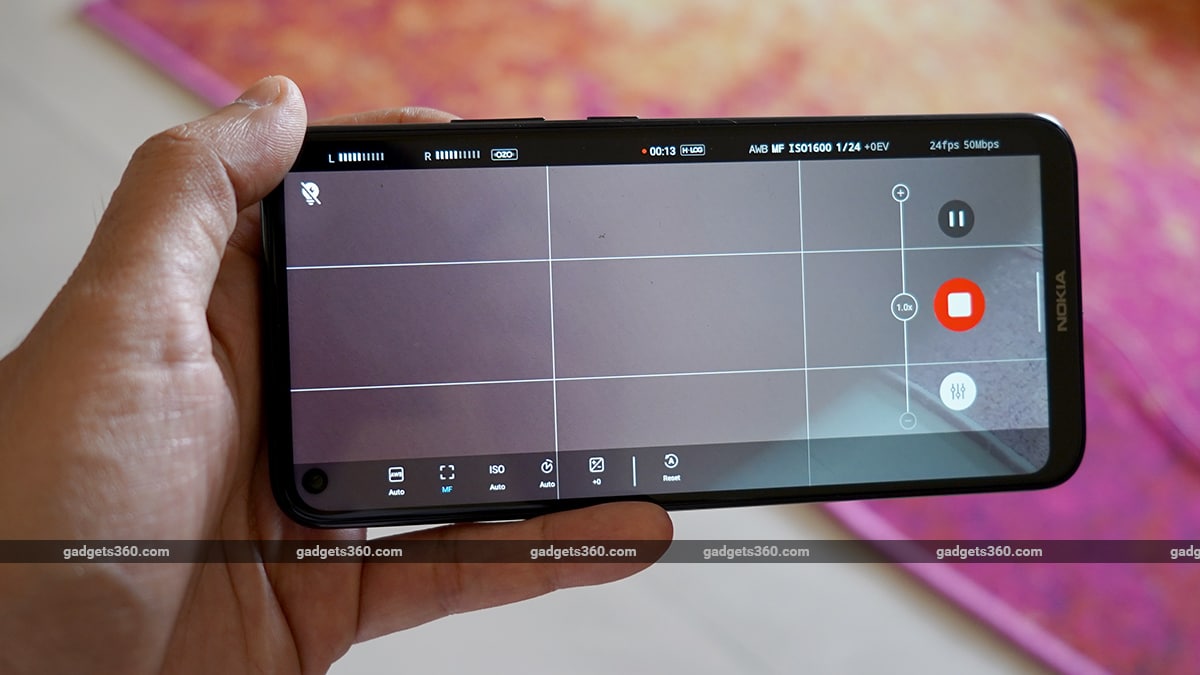 H-Log video recording is a unique offering in the Nokia 5.4

Once you've shot your video, you can open it with ‘Cinema editor' which lets you choose from a bunch of preset colour profiles such as Rec.709, etc, but you can't do any manual adjustment here. You could also open these files on your computer in compatible video editing software to colour grade it.

All of this works quite well, as advertised. Videos shot in Cinema mode aren't the sharpest due to the stabilisation being applied but if you're going for a cinematic look, it shouldn't be an issue. Image quality is decent considering we're limited to 1080p but the videos look better on a computer than the phone's low-resolution display. OZO spatial audio worked pretty well in capturing directional sound too. All said and done, H-Log video recording is a pretty niche feature which probably only a handful of content creators will care about.

It would have been nice to see HMD Global go all out and offer other professional features too, such as a zebra pattern for checking exposure and focus peaking, or maybe even face and eye autofocus. I also wished that H-Log had been usable with more commonly used aspect ratios too.

In standard video mode, you can shoot up to 1080p 60fps, which offers the best video quality, but there's no stabilisation. At 30fps, videos are stabilised well but the image quality is softer. In low light, details are weak and there is noise in dark areas. 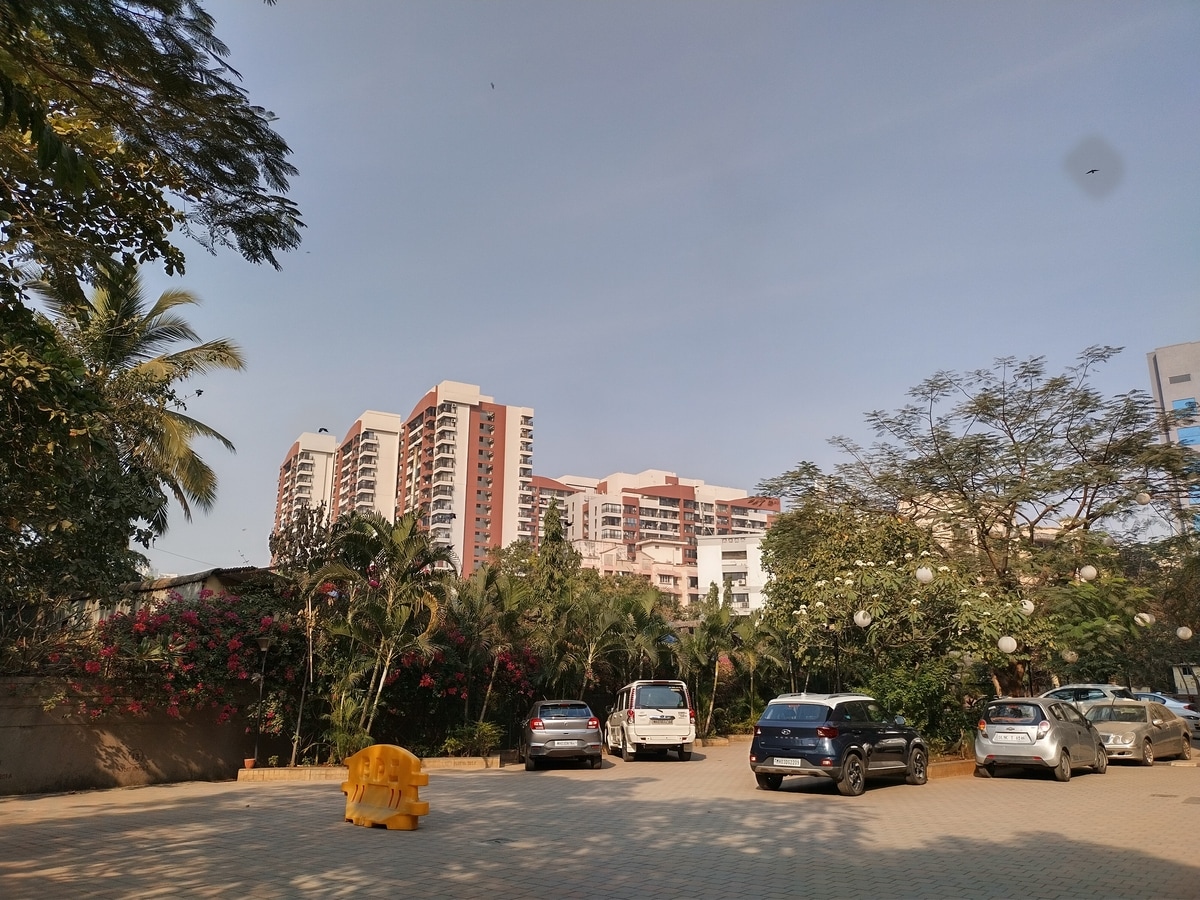 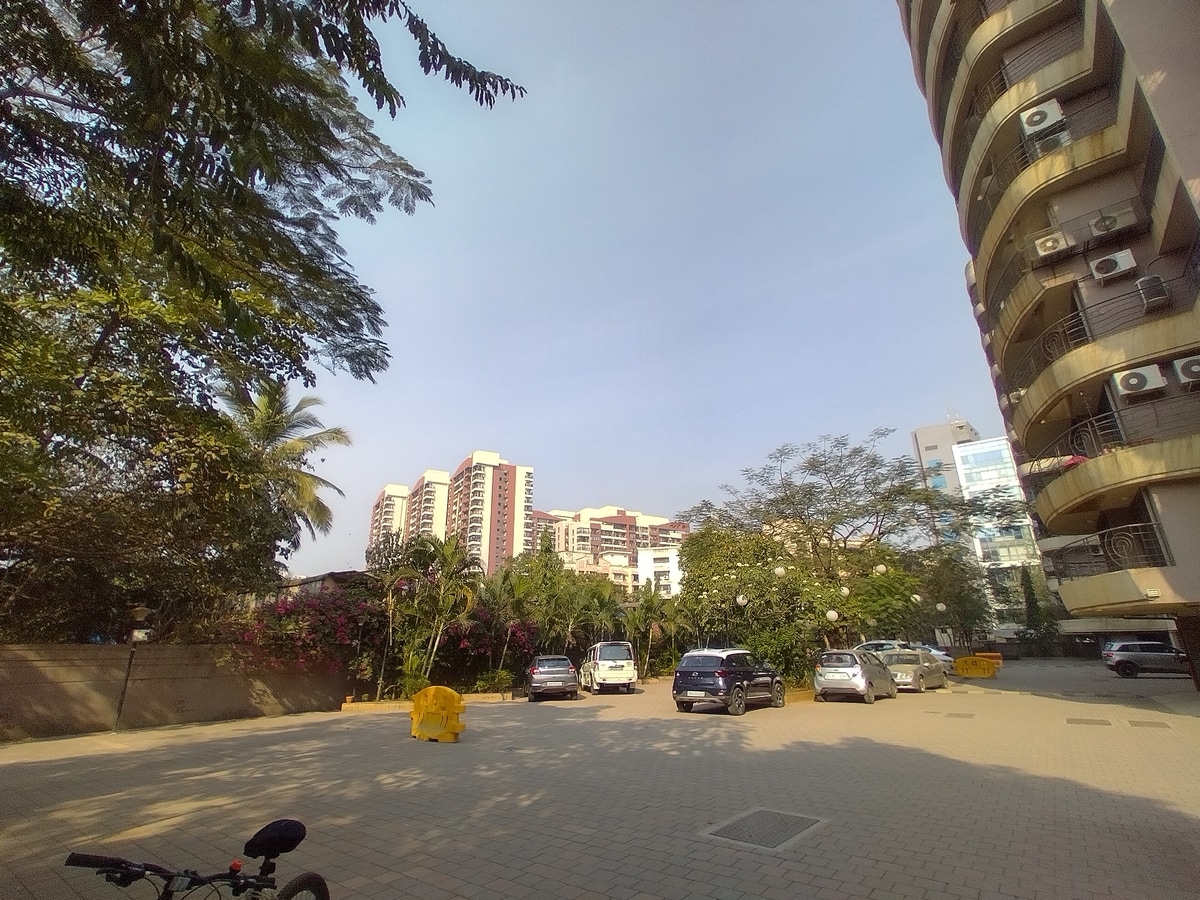 For stills, the main 48-megapixel camera captures pixel-binned 12-megapixel images by default, which look good if you manage to shoot them on a bright sunny day. The phone struggles a bit getting the focus right with close-ups, and it can get colours very wrong at times too, but overall, the quality is decent.

Images turn out grainy in low light, and sadly, Night mode increases noise considerably, while brightening up the image only a little bit. The ultra-wide angle camera has just a 5-megapixel resolution, and as you might expect, image quality is poor even during the day. I didn't find much use for the macro camera, as image quality was less than satisfactory. The 16-megapixel selfie camera does alright in the daytime and delivers passable results in low light. 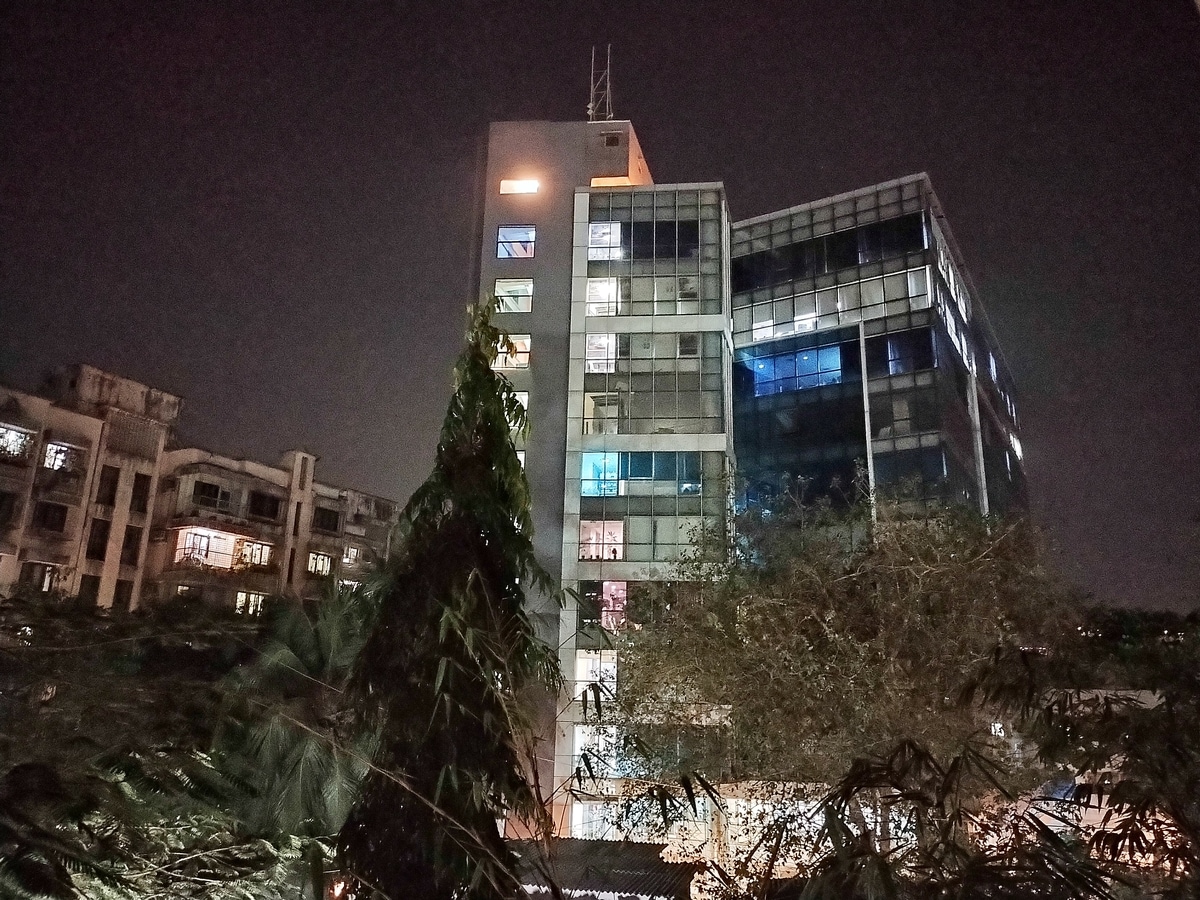 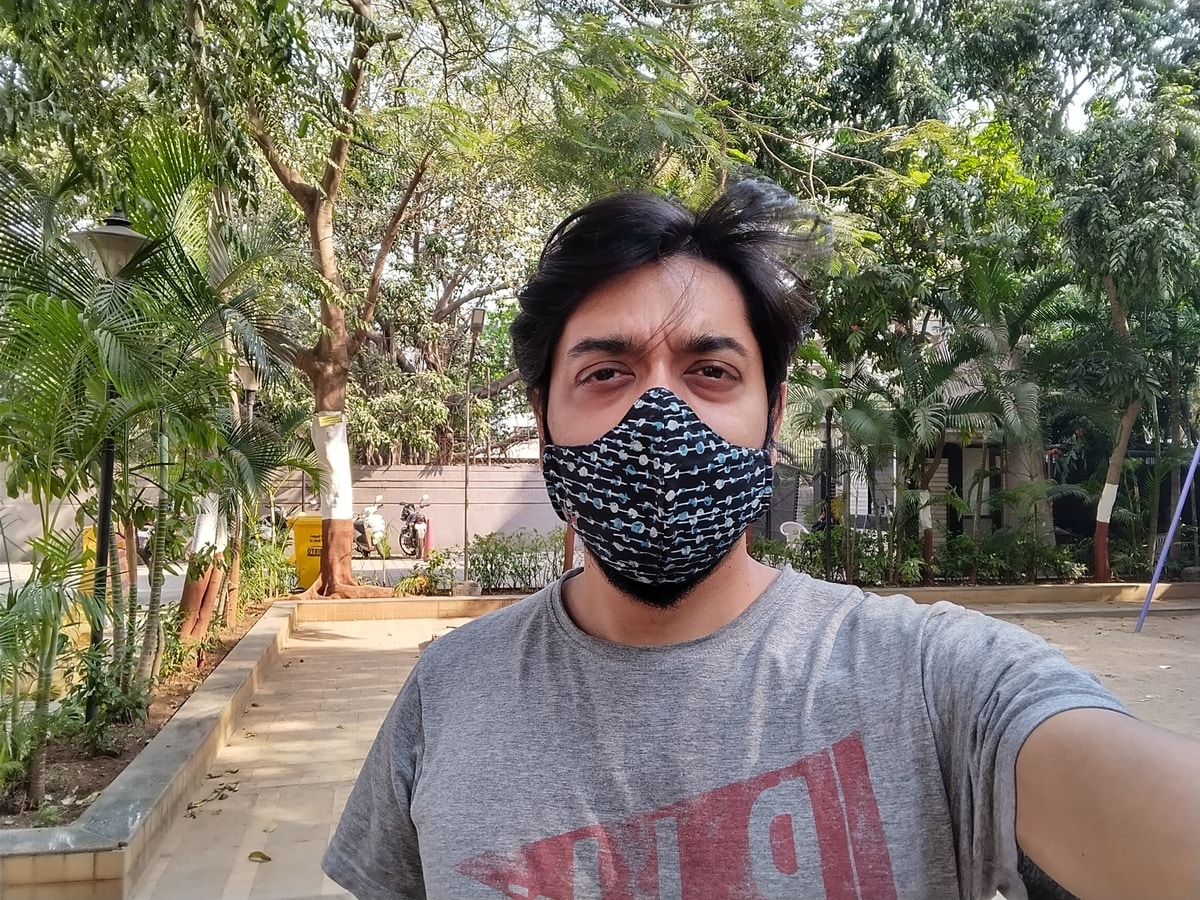 One of our gripes with the Nokia 5.3 was that it lacked video stabilisation, which HMD Global has addressed with the Nokia 5.4. The main camera also shoots decent images during the day. But overall, the cameras aren't that impressive for a phone priced at around the Rs. 15,000 mark.

Design and ergonomics are strong points for the Nokia 5.4. The curvy body makes it comfortable to hold, it's fairly slim and light, and the Polar Night trim looks fantastic. However, the back attracts smudges and fingerprints very easily, and it's a pain to keep wiping these away. The use of plastic doesn't bother me too much since this phone still feels sturdy, and I didn't find any scuff marks during the week-long review period, but it would have been nice to see some premium materials like glass. 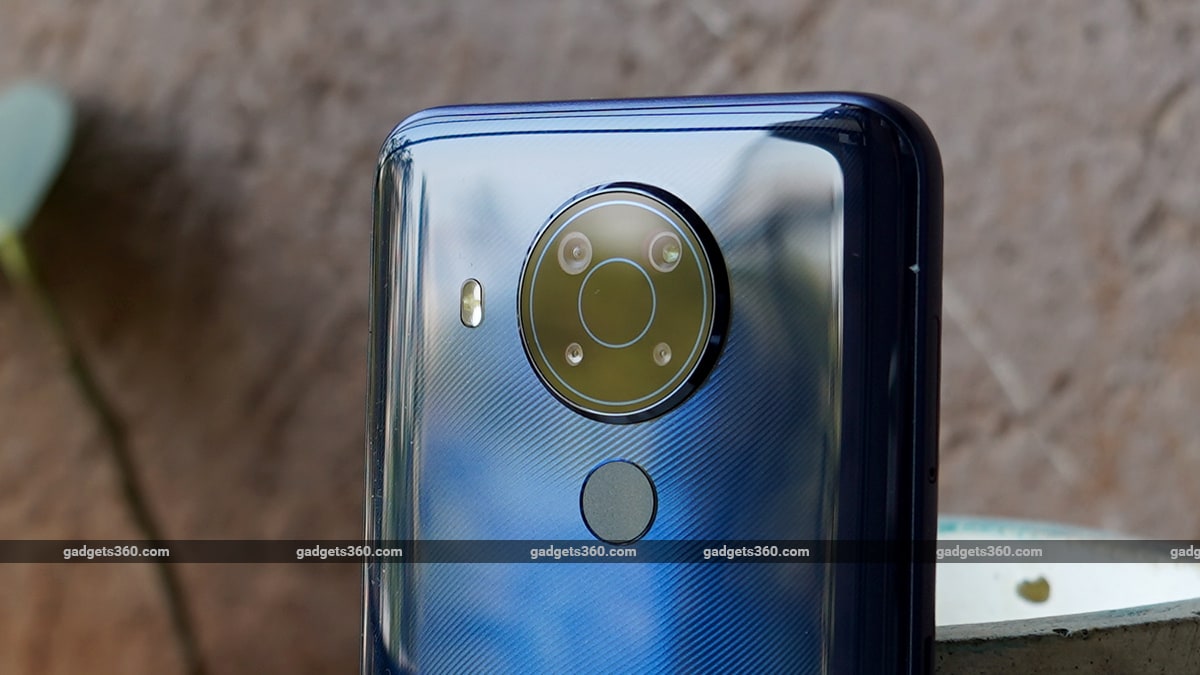 The Nokia 5.4 looks good but doesn't offer much else to stand up against the competition

The Nokia 5.4 could have been a solid choice in the sub-Rs. 15,000 segment, but the features and performance on offer just aren't competitive enough. The addition of H-Log video capture is unique, but the resolution and framerate restrictions might put a lot of people off. Take this feature away, and the cameras don't really have much else to stand on. Add to this the low-resolution display and the slightly sluggish performance of the 4GB variant, and you end up with a phone that's a little hard to recommend to anyone with a budget limit of Rs. 15,000.

The design and the fact that you get stock Android with guaranteed updates are the main redeeming factors here, but I'm not sure how well these will hold up against the current competition which is already fierce, as well as upcoming launches in this segment.

Further reading: Nokia, Nokia 5.4, Nokia 5.4 review, Nokia 5.4 price, Nokia 5.4 price in India, Nokia 5.4 specifications
Roydon Cerejo Email Roydon
Roydon Cerejo writes about smartphones and laptops for Gadgets 360, out of Mumbai. He is the Deputy Editor (Reviews) at Gadgets 360. He has frequently written about the smartphone and PC industry and also has an interest in photography. With over a decade of experience covering the consumer technology space, he is also an avid sci-fi movie and TV show geek and is always up for good horror flick. Roydon is available at roydon@gadgets360.com, so please send in your leads and tips. More
Garmin Enduro Smartwatch With Solar Charging Support Launched
ACT Fibernet Revises Plans in Bengaluru, Offers Higher FUP Limit at the Same Cost