Nokia 1 comes with Android Go and its launch price in India is Rs. 5,499

The Nokia 1 is not only the most affordable Android Nokia smartphone to date, it also is the first device from Finnish company HMD Global's stables to run Android Oreo Go edition, a version of Android designed with budget smartphones in mind. The Nokia 1 aims to redefine the low-end segment of the market and is targeted specifically at first-time smartphone users, especially those upgrading from feature phones.

Priced at Rs. 5,499, the Nokia 1 competes with the likes of the Xiaomi Redmi 5A and 10.or D, both of which run full-featured builds of Android. Does Android Go give the Nokia 1 an edge? Let's find out in our full review.

The compact and nifty design of the Nokia 1 comes across as a breath of fresh air in today's smartphone world which is dominated by oversized models with large screens. There are thick borders above and below the display, and a white plastic rim around the front fascia that gives the phone a funky two-tone look. The Nokia 1's design is reminiscent of past Lumia smartphones and manages to evoke a feeling of nostalgia.

The power and volume buttons located on the right are ergonomically placed and have good feedback. The top has a 3.5mm headphone jack and the bottom is home to a Micro-USB port. The rear camera and single-LED flash are placed in a pill-shaped housing at the back, which also has a white border that adds some design flair.

Thanks to the simple and colourful design and the nostalgic removable Xpress-on rear shells, the Nokia 1 comes across as fun and cheerful. That said, our unit's removable shell got pretty scratched and scuffed up even with careful use.

As expected from a phone in this price range, the Nokia 1 is made entirely out of plastic and does not feel very premium. At 9.5mm thick, this isn't the slimmest phone around, but it feels very comfortable in the hand thanks to its rounded body. Underneath the back cover reside the removable battery, two SIM slots, and a microSD card slot. The removable battery is a nice feature, which is rarely seen in smartphones these days.

With the Nokia 6, Nokia 8 and Nokia 3, HMD Global established quite a reputation for building rugged and durable smartphones. Thankfully, the Nokia 1 carries that trait forward. During our review, we dropped the phone a few times and it didn't get damaged at all, other than the scratches we mentioned earlier. The all-plastic Nokia 1 does not need to be coddled and babied. 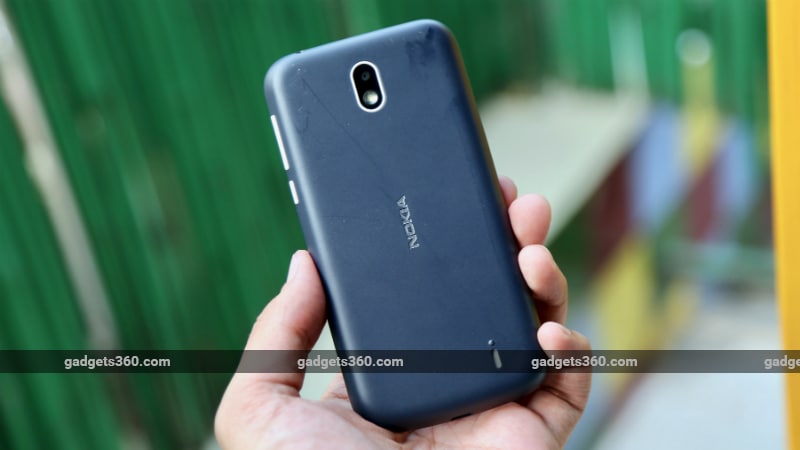 The Nokia 1 is a smartphone designed specifically to run on the Android Oreo Go platform. Android Go is Google's second attempt at building a stripped-down version of Android specifically for budget smartphones with underpowered processors, minimal amounts of storage, and 1GB or less RAM.

To that effect, the Nokia 1 is not a powerhouse by any means. It has a quad-core MediaTek MT6737M processor clocked at 1.1GHz coupled with 1GB of RAM. At 2150mAh, the battery is relatively tiny and the 4.5-inch IPS screen has a resolution of 480x854 pixels (FWVGA).

The Nokia 1 is available in only one variant, with 8GB of internal storage, though that can be expanded using a microSD card of up to 128GB. On the imaging front, the smartphone has a 5-megapixel rear camera with a fixed-focus lens and an LED flash, as well as a 2-megapixel fixed-focus front camera. Connectivity options include 4G VoLTE, Wi-Fi 802.11 b/g/n, Bluetooth 4.2, GPS/ A-GPS, FM radio, Micro-USB, and a 3.5mm audio jack.

Although navigating through the core user interface is reasonably zippy, the phone slows down dramatically with even 5-6 apps open in the background. We experienced stutters, frame rate drops, and keyboard lags while going about simple day-to-day tasks such as scrolling through our Twitter feed, taking pictures, browsing mobile-optimised websites, and chatting on WhatsApp.

Even first-party applications such as the Messaging app lagged and took a second or two to render correctly on screen, which really threw us off. There were some glaring misfires - the default Maps Go app could never find our location, and Google Go kept on crashing till we performed a system reset. In our experience, the phone also got quite warm to the touch when playing games with a small number of apps running in the background. To put it bluntly, the user experience took us back in time to an era where budget phones were laggy and frustrating to use, something we no longer see in this price segment.

The Nokia 1 does not handle games very well. Even Subway Surfers, a fairly light game which runs without a hiccup on most smartphones, saw frame drops and stutters on the Nokia 1.

We put the Nokia 1 through our tests where it managed a score of 2,452 in PC Mark's Work 2.0 benchmark, 81 in 3D Mark's Slingshot, and 471 and 1,207 in Geekbench's single-core and multi-core tests respectively. We tried running AntuTu multiple times but failed to get a result, and the device did not support 3D Mark's Slingshot Extreme test. 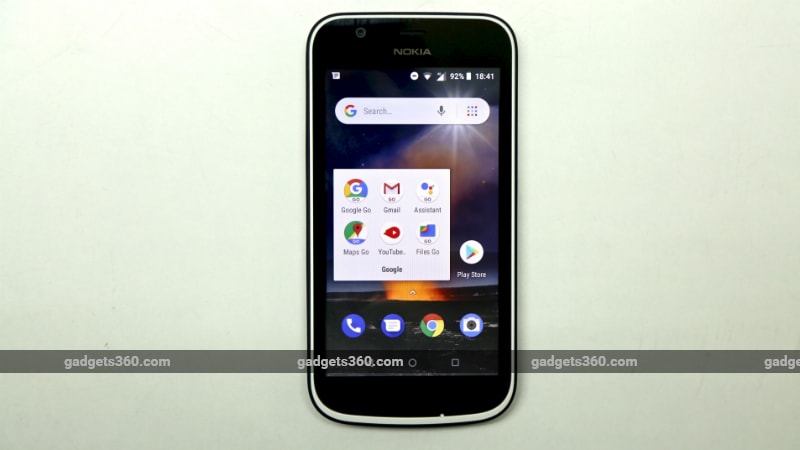 With Android Go, Google has reworked nearly all of Android's default applications to use less data and consume less space, and also modified the system UI and kernel to support devices with as little as 512MB of RAM.

"With Android Oreo (Go edition), we're not only providing Internet to every Indian, but are also making sure that entry-level devices are fully-functioning smartphones that can not only browse the Web but also can use apps", Google's Vice President of Product Management for Android and Google Play, Sameer Samat, told Gadgets 360 on the sidelines of the Google for India event held in December last year.

While this sounds very promising on paper, our first experience with Android Go has been less than stellar. The default applications are also a bit of a mixed bag. The YouTube Go application lacks crucial features such as subscriptions and personal suggestions, and is quite buggy. The app crashed on us several times during our testing as well. On the positive side, it does offer the ability download videos at different resolutions, which should help users control their data usage and also conserve storage space.

The Maps Go app is another misfire. In our experience, the application failed to load directions four out of five times. When it did work, it asked us to download the full version of the Maps app from the Play Store for turn-by-turn navigation, defeating its very purpose.

That said, Google has done a good job with the Google Go application which offers shortcuts to features like translation, GIF search, and voice search. Google has also added bookmarks to a multitude of websites in categories such as Social, Entertainment, News, Shopping and so on. While useful, we did face stability issues with this app as well.

The Files Go applications is a pretty nifty new feature, especially for a smartphone like the Nokia 1 which has a paltry 8GB of internal storage. Not only is it a fully-featured file manager, it also helps you manage storage and offload unneeded files to the cloud. The stripped-down Play Store has a special section for apps that work well with Android Go, but as of the publishing of this review, the lineup is quite sparse. 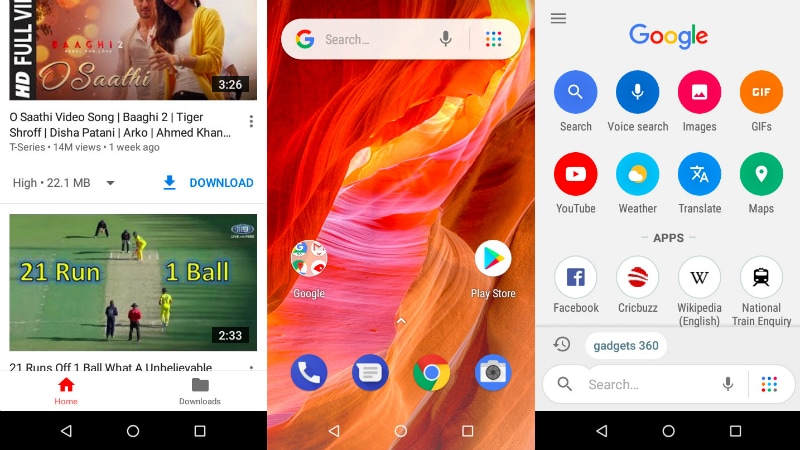 Nokia has given this device some of its own customisations. Glance Screen displays notifications and alerts you to unread messages and calls on the lockscreen. This is a nice value addition and is rarely, if ever, seen on phones in this price range.

Overall, though, our experience was far from satisfactory in terms of performance. It is quite difficult to ascertain the root of the problems. If the Nokia 1 was running the familiar mainstream build of Android, it would have been easy to hold the phone's weak specifications responsible. However, Android Go is a new platform designed specifically for this level of hardware. Either way, these performance issues don't make for a ringing endorsement for the platform.

We weren't expecting any miracles from the 4.5-inch FWVGA IPS display, and as such we were not really surprised that it is quite dull and hard to view under bright lights. In our experience, colours seemed washed-out, and the low resolution (480x854) resulted in every pixel being visible to the naked eye. That said, touch response was satisfactory and viewing angles were quite good.

In our experience, calls were clear and crisp, though we did have dropouts in areas known to have strong connectivity. The single speaker at the back is surprisingly loud and does not distort at high volume. The bundled earphones are extremely mediocre which is not a surprise at this price point. Brownie points must be given to HMD Global though for at least including a pair of earphones in the box.

The cameras on the Nokia 1 are a bit of a disappointment. Photos taken with the rear camera in low light had a lot of noise, and the colours were washed out. In our experience, shots taken in adequate light were average with fairly accurate colours. That said, detail was also lacking - objects had jagged edges and textures were not smooth. The fixed-focus lens made us struggle with macros and close-up shots. Video recording goes up to 720p, and we found that the clips we recorded were noisy and a bit jerky. 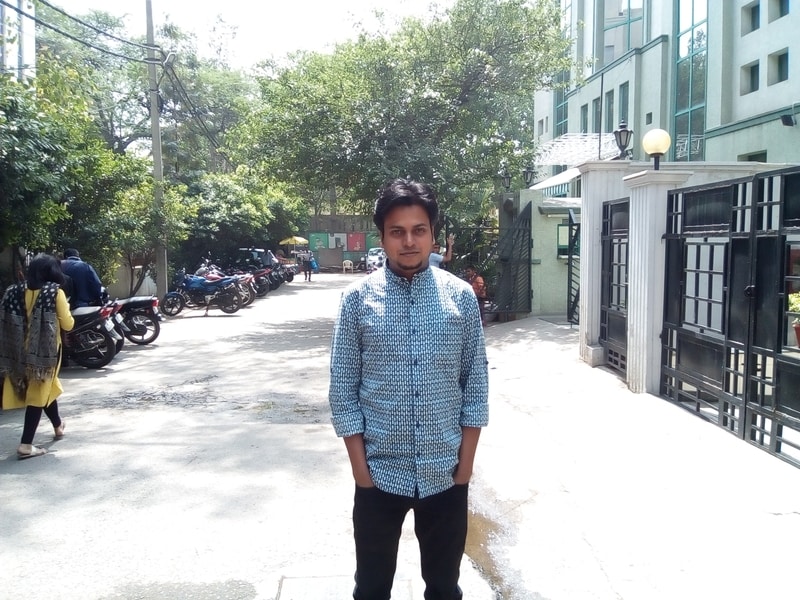 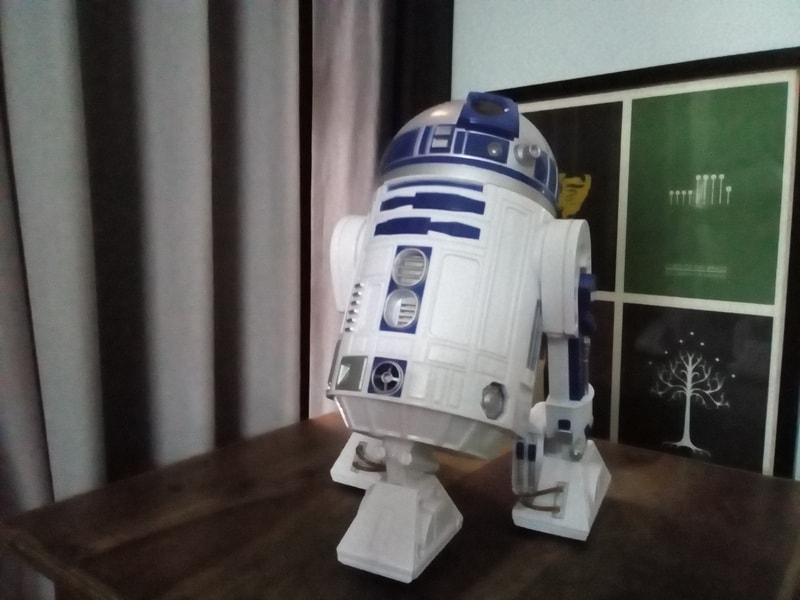 The front facing camera is strictly average as well. It really struggles in low light and produces noisy and muddy photos. Shots taken in daylight have an adequate amount of detail and are good enough for social media use. The camera app itself is easy to use and has a manual mode that lets you control the white balance and exposure. However, it is a bit slow and takes a few seconds to process each image.

In our HD video loop battery test, the Nokia 1 lasted 8 hours and 45 minutes, which is disappointing. Real-world performance was average as well. We found ourselves reaching for the charger by 7-8pm each day, after medium to intensive use. We found that the Nokia 1 took close to two hours to charge fully, which is longer than what we have seen from smartphones with larger batteries. 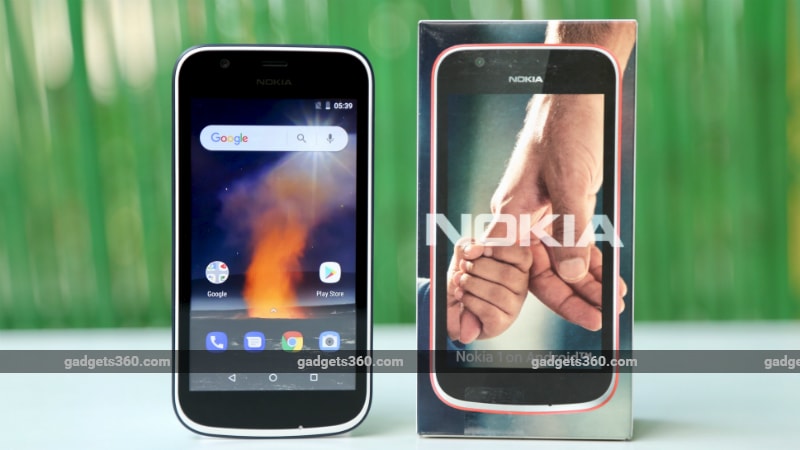 Verdict
The biggest issue with the Nokia 1 is the Rs. 5,499 sticker price. If this smartphone had been priced somewhere in the vicinity of 3,000 to 4,000 rupees, it could have been a viable option for feature phone users looking to upgrade. Jio users can take a look at the cashback offer which effectively drops the price of the phone down to Rs 3,299, but others should definitely take a long, hard look at the competition before parting with their hard-earned cash, as there are plenty of other options in the sub-Rs. 10,000 price segment.

Both the Xiaomi Redmi 5A and 10.or D offer much more well-rounded experiences and run fully featured Android, and both are priced just a smidgen higher than the Nokia 1, making it extremely hard to recommend this smartphone. Android Go seems to be a work in progress at the moment, and the performance issues are just too substantial to ignore.