Motorola unveiled its approach to modularity with the Z series of smartphones last year. The Moto Z (Review) ticked all the boxes for a flagship device, while the Moto Z Play (Review) was much more affordable. Along with these phones, Motorola launched a series of Moto Mods that helped enhance their potential. Other smartphone makers, most notably LG, have abandoned the modular approach, but Motorola has so far stuck to its promise of supporting Moto Mods for three years. Now, with the Moto Z2 Play, it looks like buyers have new option to choose from.

The Moto Z2 Play is the successor to the Moto Z Play, which earned a good name for itself by being affordable and versatile. The new model has an updated SoC but has to make do with a smaller battery. Can the Z2 Play continue the legacy of the phone it is replacing? Let’s find out.

While the Moto Z was praised for its sleek body, the Moto Z Play was more bulky. Thankfully, the Moto Z2 Play is thinner, at just 5.99mm. Moto’s choice of metal for the back instead of glass makes it look quite premium. To ensure support for last year's Mods, Moto has retained the 16-pin connector at the back. These pins are made with 23-karat gold to prevent corrosion and are scratch-resistant to some extent. The height, width and overall shape of the phone remain unchanged so that existing Mods fit.

The Moto Z2 Play is available in two colour options, Lunar Grey and Fine Gold. The Grey variant has a black front and looks stealthy, while the Gold version has a flashy white front. Motorola has used a unique antenna design that runs around the back of the phone. This looks good and really stood out on our gold review unit. Unfortunately, the camera bump sticks out like a sore thumb. It adds adds roughly 2 mm to the thickness of the phone. The bump contains the camera itself, dual-tone flash, and laser autofocus emitter. A metal ring keeps the camera lens safe from scratches.

With the height and width of this phone unchanged, Moto has stuck with a 5.5-inch Super Amoled display. Below it is the fingerprint sensor and a microphone used primarily for calls. The front camera is positioned on the top along with proximity, ambient light sensor, a recessed earpiece and a dual-tone front facing flash. The frame of the Moto Z2 Play is metal and so are the power and volume buttons. These buttons are small in size and are positioned a little higher than we would have liked, forcing us to stretch our thumbs. Thankfully, the power button has a ribbed pattern to distinguish it from the volume buttons.

At the top is the SIM tray along with a second microphone, while the USB Type-C port and 3.5mm audio socket are the bottom. The Moto Z2 Play also has a third microphone at the back towards the bottom. There's no speaker grille, but the earpiece doubles up as a loudspeaker. In the box, you will get a 15W Turbo charger, a set of in-ear headphones, and a SIM ejector tool which is a little slimmer than usual. Motorola seems to be committed to its promise of a three-year minimum life cycle for its Moto Mods. The upside is that the new Moto Z2 Play is compatible with all Moto Mods launched to date. There are also a few new ones now. The JBL Soundboost mod launched last year has gotten an update in the form of the JBL Soundboost 2, which is thicker and 20g heavier. The new Turbo Power pack is a 3450mAh battery mod and is capable of turbo-charging the Z2 Play. The Turbo Power Mod can also be charged quickly using the Turbo charger supplied with the phone. Finally, you can also choose from new Style Shells, some of which now have wireless charging receivers in them. With a new shell attached to the Moto Z2 Play, you can just drop it onto a Qi or PMA pad to charge it. 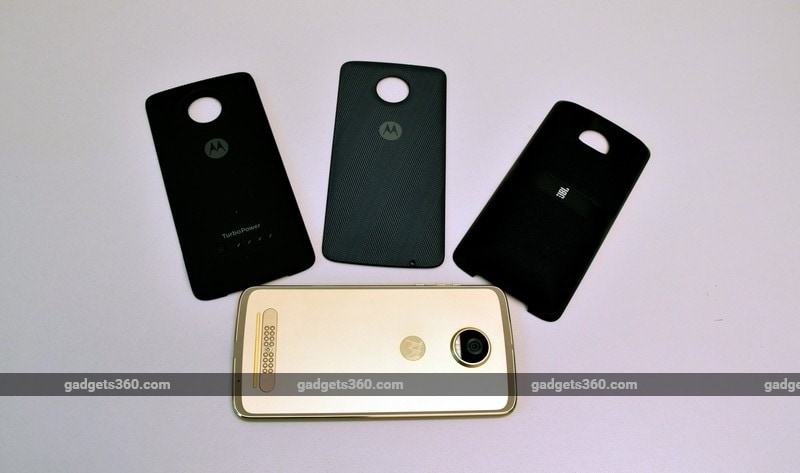 Moto managed to strike a great balance between hardware and software with the Moto Z Play, which resulted in phenomenal battery life. With the Z2 Play, Moto has chosen the Snapdragon 626 SoC which is an updated version of the Snapdragon 625 in last year's model. This processor is clocked at 2.2GHz. The phone also gets 4GB of RAM and 64GB of storage which can be increased by using a microSD card of up to 2TB. Internationally, there is a 3GB RAM/ 32GB storage model as well, but Lenovo has chosen not to launch that in India. The Moto Z2 Play is a dual-SIM smartphone with support for 4G and VoLTE. There is Bluetooth 4.2 along with dual band WiFi and NFC.

The 5.5-inch Super AMOLED display on the Moto Z2 Play sports a full-HD resolution. You have the option to set the display to Standard or Vivid output modes depending on your preference. We found that the output in Standard mode was a little too dull for our liking, but Vivid mode was too aggressive. Sadly, there is no way to tweak the output manually and find a happy medium, and you’ll have to select the preset you can live with. There is also a night mode which can be configured to activate based on sunrise and sunset, or to kick in at a specific time. We found the night mode to be helpful when using the phone at night. There is no option to set the intensity, though.

Like other recent Motorola phones, the Z2 Play ships with near-stock Android and the Pixel launcher. Purists will love the experience as the only thing visible customisation on the phone is Moto Actions. This is what Moto calls its gesture control feature. The Z series finally now gets the same fingerprint gestures that Moto launched with the Moto G5 (Review) and Moto G5 Plus (Review). With these enabled, the three-button Android navigation bar at the bottom of the screen disappears, freeing some screen real estate. You then need to swipe left on the fingerprint scanner to go back, and swipe right to bring up the app switcher. One tap on the fingerprint scanner will take you to the homescreen, and you can also lock the phone by long-tapping on the fingerprint scanner till you feel a short vibration. Holding it down even longer is the standard shortcut for Google Assistant. While it does sounds complicated, it took us less than half an hour to get used to this navigation scheme.

Stock Android and the Snapdragon 626 SoC give the Moto Z2 Play a boost in terms of performance. We had no trouble while browsing through the UI and multitasking. Out of the 4GB RAM, we found around 2.3GB free on a fresh boot, and roughly 1.5GB available at most times. The phone would also preserve apps in memory instead of quitting them to save RAM. This helps multi tasking immensely, as you don’t have to wait for an app to load again.

We played games like Clash Royale and Asphalt 8. In the past we have found that running Clash Royale for a log time heats phones up, but the Moto Z2 Play ran relatively cool. The battery still drained rather quickly while playing. Similarly, Asphalt 8 ran smoothly even after we pushed the graphics setting all the way up. 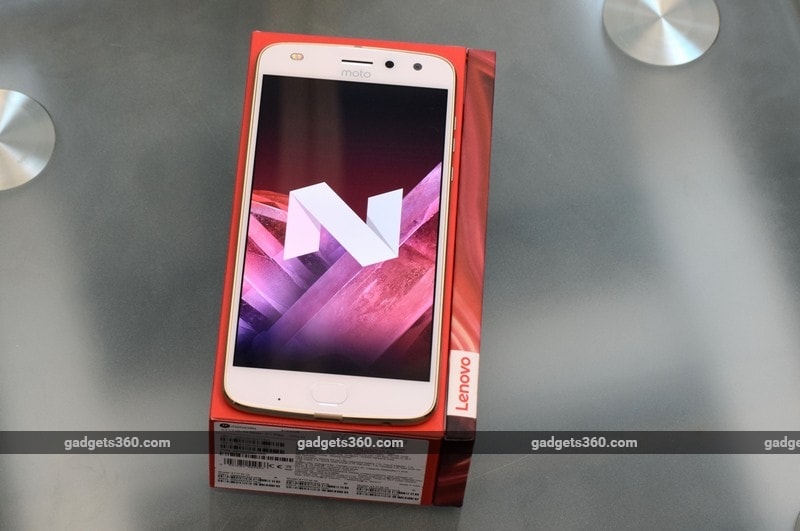 The Moto Z2 Play returned a score of 69,520 in Antutu, which is a bit higher than the what the Samsung Galaxy C7 Pro (Review), its closest competitor, managed. In our HD video loop test, the Moto Z2 Play managed to run for 14h hours and 1 minute which is good, but is also three hours less than the Moto Z Play. Charging the phone does not take long with the bundled 15W charger, but we also found the phone getting warm while charging.

The Moto Z2 Play sports a 12-megapixel rear camera with dual-pixel autofocus, phase detection autofocus, laser autofocus and a dual-tone LED flash. The camera also boasts of an f/1.7 aperture which in theory should help it take good photos in low light. You can use a double-twist gesture to launch the camera app, which is pretty simple and easy to use. The advantage of multiple focusing methods is evident. We could quickly take shots of moving objects, but there were times when we had to tap multiple times to manually get the camera to focus where we wanted.

The output from the camera is good, but photos taken outdoors tend to be overexposed. The AMOLED display, when set to Vivid, makes photos look more vibrant than they actually are. HDR mode is useful and you have the option to set it to auto. We noticed slight ghosting in a few photos caused by our hands shaking.

The Moto Z2 Play has an auto night mode which is triggered in low light. We were expecting great shots, but this wasn’t the case all the time. The camera software would usually bump the ISO up in order to maintain a low shutter speed, which reduced blur but at the expense of a lot of noise in photos. Some of our sample shots came out brilliantly, but the app's behaviour wasn't very consistent. Thankfully you can take complete control over the camera's parameters using the Professional mode. For video recording you can choose between full-HD at 30fps or 60fps, and 4K at 30fps.

At the front, the Z2 Play sports a 5-megapixel selfie camera along with a dual-tone LED flash. The flash is quite helpful when taking selfies in low light. There is a beautification mode which can be used to improve skin tones. It's relatively subtle, not over the top like we've seen with some phones. The front camera also supports HDR which is a good touch. Photos taken with the front camera are quite good and can be shared without edits. 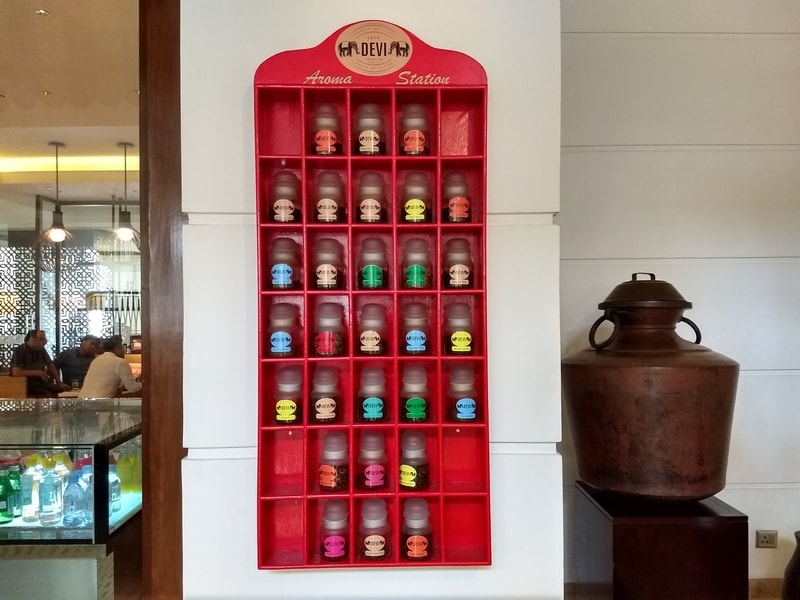 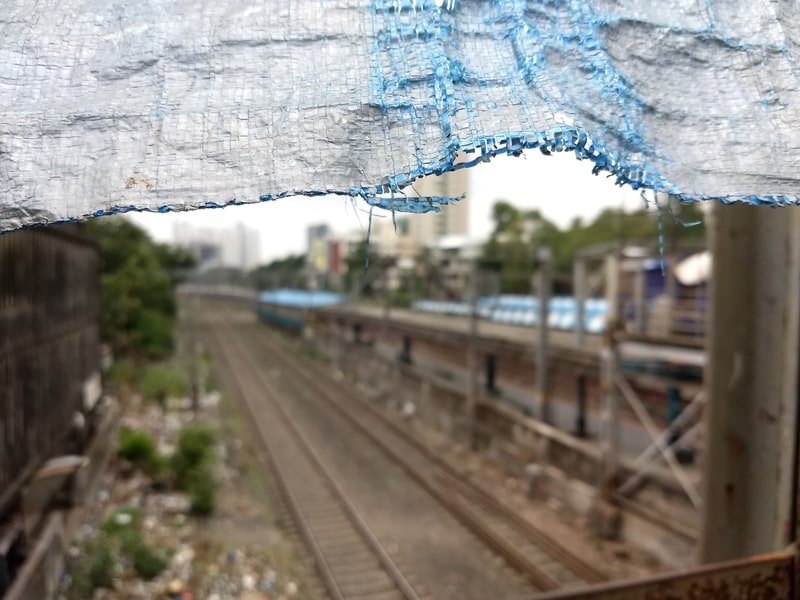 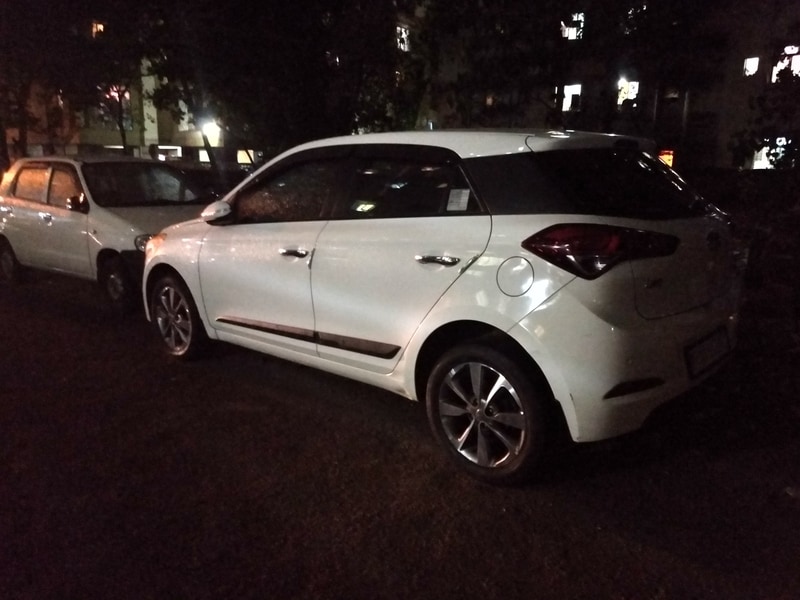 With the Moto Z2 Play, Motorola is still on the path it started last year. The new model is slimmer, but at the cost of battery capacity. Dropping the battery size for aesthetics might not have been the best idea because Motorola has weakened one of the Z Play's best attributes. You can of course spend some money and snap on one of the Moto Mods to increase the battery capacity (and thickness/ weight). The updated Snapdragon 626 SoC and 4GB of RAM keep games running smoothly and make multitasking easy.

If you want a sleek modular smartphone running stock Android then the Moto Z2 Play is pretty much your only option. You also have to factor in the cost of the Mods, as opposed to standalone accessories. However, if you aren’t interested in the Moto Mods, Samsung offers the Galaxy C7 Pro (Review) for a little less, or you can spend a little extra and get the OnePlus 3T (Review).