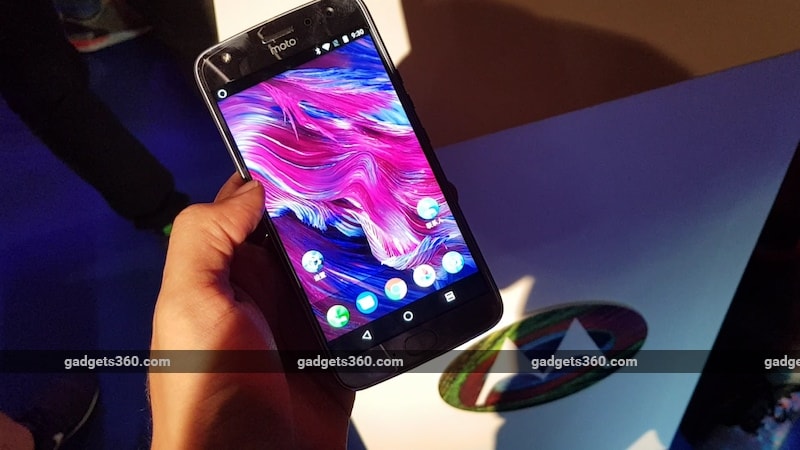 Lenovo is making full use of the Moto brand, attacking multiple market segments with different models. The latest diversification of this line comes in the form of the new Moto X, which isn't as premium as the Moto Z lineup, but still targets buyers who want to go beyond the mid-range. The emphasis is on style and camera quality, plus of course the stock Android experience that is now a core part of the Moto brand identity.

Unveiled at IFA 2017, the Moto X4 definitely grabs attention with its looks. It's available in Super Black and Sterling Blue, and of the two options the lighter blue one catches the light better. Both have highly polished and reflective backs, which look great until you actually pick them up. This phone is a massive fingerprint magnet, and there's no way to prevent smudges on the back or front, both of which are made of Corning Gorilla Glass. This phone is clearly set apart from the Z series by its lack of support for Moto Mods.

The frame of the Moto X4 is a matte aluminium. It's 7.99mm thick (or 9.45mm including the camera bump), and weighs 163g. The phone is IP68 for water and dust resistance, which should keep you safe from occasional exposure. Moto reps were happy to dunk demo units into tanks of water to prove that the phone would continue to work.

The dual cameras are housed in a large raised circle on the rear, which is also becoming standard across the Moto lineup. The edges have a pattern that's meant to look like a watch dial. One of these cameras has a 12-megapixel sensor with dual-autofocus pixels and an f2.0 aperture. The other has an 8-megapixel sensor and wide 120-degree field of view. The dual-LED flash can fire with different colour temperatures depending on the scene you're shooting. The front camera has a 16-megapixel sensor and f2.0 aperture. There's also a 4-megapixel adaptive low-light mode which trades resolution for sensitivity.

Moto showed off a number of its camera app enhancements including the ability to switch between lenses, add depth effects, and capture shots in monochrome with a single spot colour left intact. The app can recognise landmarks and objects, and then show links to relevant shopping and Wikipedia pages. It can also recognise QR codes and business cards. In our short time with the phone, we tried out the camera app and found that it crashed multiple times when switching between lenses or trying different modes. We also found lens switching to be much more laggy than it is on other phones with the same feature, which made composing shots a challenge. Object recognition was hit-or-miss, but that could have been due to constrained connectivity in the extremely crowded venue.

The other big feature that Moto highlighted is that this phone can connect to four Bluetooth audio devices simultaneously, letting users synchronise sound to multiple speakers or pairs of headphones. You could fill up a large room or multiple rooms in a house, exercise with a group, or coordinate instructions to people working together.

The rest of the Moto X4's features are fairly standard - it has a 5.2-inch full-HD screen, Qualcomm Snapdragon 630 SoC, 3GB of RAM and 32GB of storage. All demo units had a single Nano-SIM slot and a microSD card slot. It's possible that international variants will be introduced with different storage, memory and SIM configurations, but the company had no comment about that. The battery capacity is 3000mAh and fast charging is supported. There's also Bluetooth 5.0, dual-band Wi-Fi ac, NFC, GPS and a fingerprint sensor, but no FM radio.

On the software side, Moto is boasting of Alexa integration in addition to Google Assistant. There are also a few added conveniences such as the ability to take a screenshot by tapping the screen with three fingers rather than fiddling with the side buttons, and an integrated password manager.

Lenovo will launch this phone in Europe first, priced at EUR 399 (roughly Rs. 30,000). There's no word yet on when it will come to India, but we can expect it before the end of this year.