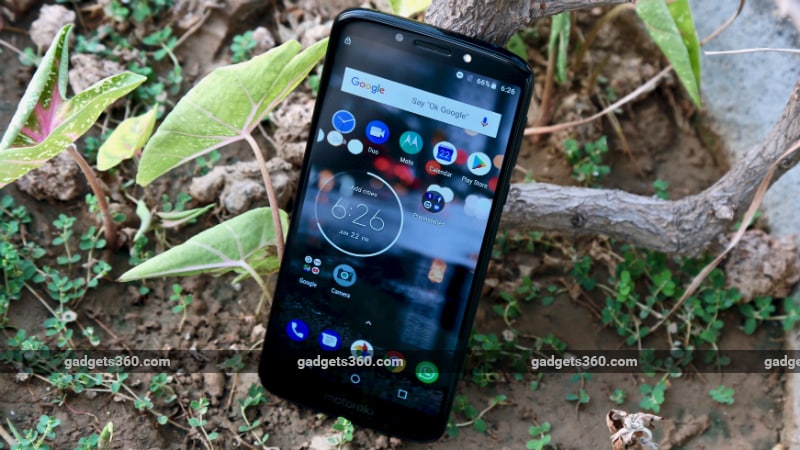 With the Moto G6 (Review) and Moto G6 Play, Motorola has finally latched on to the 18:9 display trend that has permeated the smartphone industry. We have already reviewed the Moto G6, and now we have its more affordable sibling in for review. The Moto G6 Play is a budget smartphone that has a striking design, a near-stock build of Android and a sizeable 4,000mAh battery.

Can the Moto G6 Play carve out a place for itself in a competitive segment populated by the likes of the Asus ZenFone Max Pro M1 (Review) and the Xiaomi Redmi Note 5 (Review), both of which offer tremendous value for money? Let's find out in our full Moto G6 Play review.

The Moto G6 Play looks a lot like the pricier Moto G6. The highly polished metal midframe and circular rear camera module have been carried over from the Moto G6, but the glass on the back has been replaced by what Motorola calls 'polymer glass'. Marketing-speak aside, the back panel is made of plastic with a high-gloss finish that's trying to imitate glass. It does not feel as premium, but is claimed to be less prone to breakage. Build quality is top-notch and the phone feels reassuringly solid.

The most striking aspect of the G6 Play's design is how easy it is to fit this phone in one hand. However, the body is quite slippery and the plastic back picks up smudges at an alarming rate. The lack of an of an IPxx rating for water resistance is not a surprise at this price point, but the Moto G6 Play even lacks the water resistant nano-coating found on the Moto G6 and Moto G5S Plus (Review).

While the Moto G6 has a pill-sized front facing fingerprint sensor, the one on the Moto G6 Play is embedded within the Motorola batwing logo at the back. Fans of Motorola's familiar dimple, which was last seen in the third-generation Moto X series, will feel right at home. The setup process is surprisingly slow but the sensor is quick, accurate, and easy to locate by feel.

The volume rocker and power button are on the right, and the left edge is blank save for the SIM tray which has separate slots for two Nano-SIMs and a microSD card. While the buttons are quite small, they are tactile and well within reach. On the top of the Moto G6 Play is a 3.5mm headphone socket.

Unlike its more expensive sibling - which has a modern USB Type-C port - the Moto G6 Play makes do with the old Micro-USB standard for charging and data transfers. The earpiece also acts as a speaker, and while it's loud and clear, the sound it produces lacks warmth.

The Moto G6 Play is powered by the Qualcomm Snapdragon 430 processor clocked at 1.4 GHz. Similarly priced smartphones such as the Asus ZenFone Max Pro M1 and Realme 1 are powered by the Snapdragon 636 and Helio P60 respectively, which are much more powerful.

It's available in only a single variant with 3GB of RAM and 32GB of storage, priced at Rs. 11,999. You can expand storage using a microSD card of up to 128GB. The biggest USP of the G6 Play is its 4,000mAh battery, which Motorola claims is good for 32 hours of mixed use - we'll see in a bit if the smartphone lives up to that claim.

The Moto G6 Play has a 5.7-inch HD+ IPS display with an aspect ratio of 18:9. The screen is not entirely borderless, and the bottom bezel in particular feels like a waste of space.

The panel is bright and has decent viewing angles. However, colours are dull and pixelation is visible to the naked eye in text-heavy websites. At a time when most competing smartphones feature full-HD+ panels, this low resolution just does not cut it.

The Moto customisations to Android include an always-on display feature that allows for quick replies to messages right from the lock screen, and a blue light filter that can be triggered at set times.

We could get through basic tasks with relative ease, but the effects of the relatively underpowered processor could be felt when scrolling through heavy websites in Chrome and when we had a lot of apps open in the background. We also dealt with keyboard lags on several occasions during our review period. What helps day-to-day use is the clean and fluid software package on board the Moto G6 Play. The smartphone runs a near-stock version of Android 8.0 with a few value additions such as an always-on display, a feature called Moto Key that allows you to enter passwords using your fingerprint, and Attentive Display, which keeps the screen on while you are looking at it. Familiar Moto Actions such as a chop gesture to turn on the flashlight, and double-twist to launch the camera app, also are also present.

Games like Subway Surfers and Asphalt 8 are playable but exhibit occasional frame rate drops and stutters. Power users and anyone serious about gaming should steer clear of the Moto G6 Play and look at more powerful options such as the Asus ZenFone Max Pro M1 or Realme 1 instead. Benchmark scores were fairly average. The Moto G6 Play managed 58,134 points in AnTuTu, 3,715 in PC Mark's Work 2.0 benchmark, 10fps in GFXBench Manhattan 3.1, 26 fps in GFXBench T-Rex, and 632 and 2219 respectively in Geekbench's single-core and multi-core tests. While the glass-backed Moto G6 heats up considerably under duress, the G6 Play had no such problem.

Motorola has not announced any update timeline for the sixth generation G-series, but history suggests that the Moto G6 Play will be updated to Android P in the future. Unfortunately, the G6 Play comes with a bit of bloat unlike past modes - Facebook, Phone Pe, Outlook, and LinkedIn are preinstalled. This isn't a lot, but it does somewhat dilute the stock Android experience, and these applications cannot be uninstalled.

Facial recognition, a feature found on most smartphones of late, is conspicuous by its absence. Thankfully, the fingerprint sensor is quick and accurate.

The Moto G6 Play has a single 13-megapixel camera at the rear with an aperture of f/2.0. At the front, there's an 8-megapixel wide-angle camera with an aperture of f/2.2. The single sensor at the back is nothing to write home about. Images taken at night are dark and muddy with a considerable amount of noise. The camera has a tendency to bump up the ISO in unfavourable light, which makes the images look unnaturally bright.

Shots taken in good light came out a fair bit better. The level of detail is decent and colours are reasonably accurate. However, both the front and the rear cameras have poor dynamic range and have a tendency to overexpose shots.

The front camera also struggles in low light, producing dark and grainy images with poor detail. There is a beauty mode which removes blemishes and works as well as you would expect. Video capture maxes out at 1080p (30fps) for the both the front and rear cameras. While videos shot by the front camera are mediocre at best, we were pleasantly surprised with the quality of the videos produced by the rear one. The level of detail is average, but Motorola's EIS does quite a good job.

Performance in our HD video battery loop test was a respectable 11 hours and 30 minutes. Real-world performance was quite impressive as well. The smartphone easily lasted through an entire day of moderate use, and still had around 20 percent left in the tank.

Our review unit came without a charger but the retail box ships with a 15W Turbo Charger that Motorola claims can provide hours of use within minutes. We used the 15W Turbo Charger bundled with the Moto G6, which took the G6 Play to 50 percent from an empty tank in around 45 minutes.

Verdict
The Moto G6 Play looks great, is built well, and is easy to use with one hand. The battery life is above average and the software package is fluid and has a few useful customisations. However, the cameras are average, performance is sub-par, and the display is nothing to write home about.

The G6 Play is an average, middle-of-the-road smartphone that doesn't aim for greatness. Competitors such as the Asus ZenFone Max Pro M1 (Review) and the Redmi Note 5 (Review) are not only more powerful but more well-rounded on the whole. Then there is the Realme 1 (Review), which has a cluttered user interface but a considerably more powerful processor.