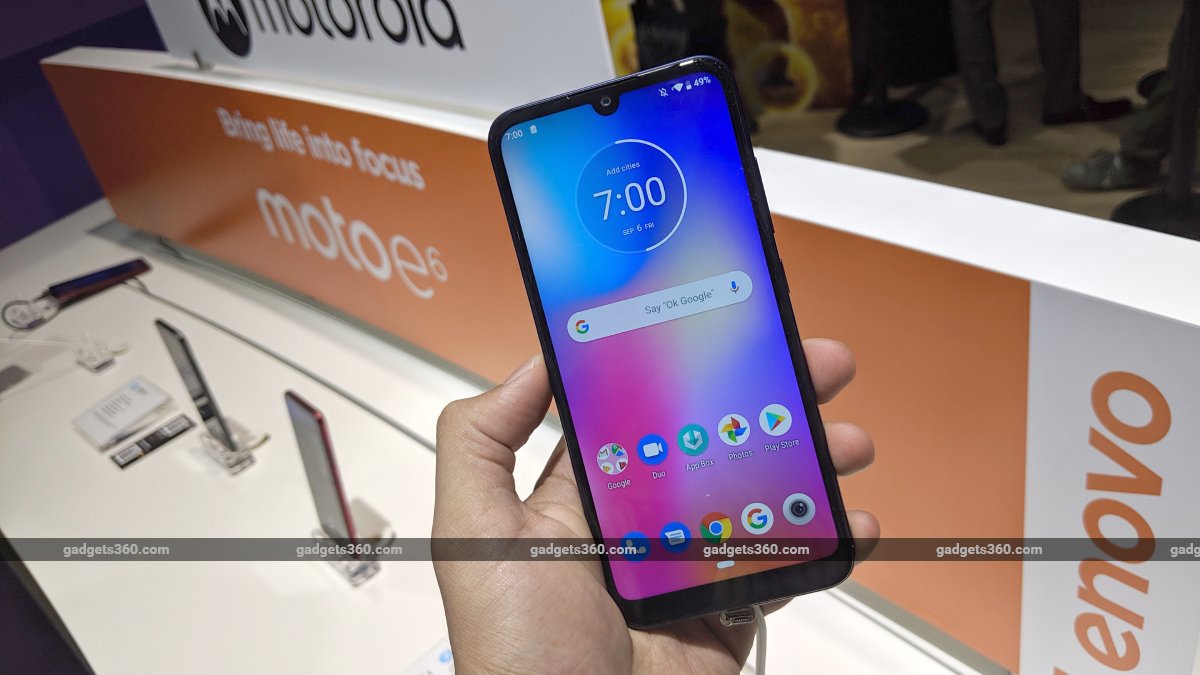 Motorola was one of the first brands to kick off the epic price wars that have raged through the Indian smartphone market for the past couple of years. The much-loved early generations of the Moto G series and Moto E series regularly found spots on our lists of the best value smartphones to buy, and their clean Android software without any bloat or spam also earned them fans. Of late though, Xiaomi, Realme, Honor, and other brands have largely stolen the lead in terms of offering the best features and specifications for cost-sensitive buyers. Now, Motorola is back with a new competitor, the Moto E6 Plus.

The Moto E6 Plus was unveiled at parent company Lenovo's press conference at the IFA trade show in Berlin, underscoring the brand's commitment to the European market. It isn't known for certain whether this model will come to India, but if it does, it will have to fight very hard to be popular at its price of EUR 139 (approximately Rs. 11,000). We were able to spend a little time with this smartphone at IFA 2019, and here are our first impressions.

First of all, the device feels very slim and light. Even with a 3000mAh battery and 6.1-inch screen, this phone weighs only 149g and is 8.6mm thin. It was shown off in four colour options: Bright Cherry, Polished Graphite, Rich Cranberry, and Caribbean Blue. The first two are plain colours with glossy finishes, while the second two have slight tinges of black in the centre for a dual-tone look.

On the front, there's a 6.1-inch IPS LCD screen with an HD+ 720x1560 pixel resolution. The screen quality seemed good enough to us, under the harsh lighting at the event and show floor, but we need to wait till we can review the Moto E6 Plus in depth to really see how well the screen works in all conditions.

The processor is the entry-level MediaTek Helio P22, and the RAM options are 2GB and 4GB. Storage comes in at either 32GB or 64GB depending on what variants Motorola brings to each country, but there is support for microSD cards of up to 512GB. There's a fingerprint reader on the rear, and face recognition is also available.

Motorola points out that the Moto E6 Plus has two rear cameras, which really isn't a big deal at all in the low-cost segment anymore. Predictably, the 13-megapixel f/2.0 main camera is joined by a 2-megapixel depth sensor. The front camera has an 8-megapixel resolution.

There's a dual-camera module on the rear, in keeping with current trends

We were surprised by how smudged and slippery the units we were able to use following the launch event were. Granted, they had just been handled by throngs of eager conference attendees, but the effect was a lot worse than we're used to seeing, and seems to indicate that this will be a problem for owners. We do hope that a plastic case will be included in the retail box.

The back of the Moto E6 Plus is removable, which came as a surprise to us. The battery is removable and there will be single-SIM as well as dual-SIM options in different countries. What wasn't a surprise was the Micro-USB port on the bottom.

General performance seemed fine to us in our short time with the Moto E6 Plus, and we didn't have trouble moving around the Android UI. It remains to be seen how well it will handle common apps and games. We'll also need to test the cameras thoroughly if this phone is launched in India and we get a chance to review it.

The announced European pricing for the Moto E6 Plus seems a bit too high for it to be hugely successful in India. Still, this phone could be good for users with simple needs who don't want to deal with complicated devices, and it could also serve as a solid secondary phone.

For more information about the Moto E6 Plus as and when the company announces anything, do stay tuned to Gadgets 360.