Soon after launching the Moto G6 (Review) and Moto G6 Play (Review) in India, Lenovo's Motorola is back with the Moto E5 Plus, which has a hefty 5,000mAh battery, an expansive 6-inch display with an 18:9 aspect ratio, and a near stock build of Android at an attractive price.

Competition in the sub Rs. 15,000 segment is heating up and smartphones such as the Asus ZenFone Max Pro M1 (Review) have set new benchmarks in terms of what to expect from a smartphone in this category. Manufacturers can no longer get by with pushing outdated processors and stale designs. Can the fifth generation of Motorola's popular E series bring the fight to the ZenFone Max Pro M1 as well as the popular Redmi Note 5 (Review)? Let's find out.

This phone looks more premium than it feels. The plastic back has a high-gloss finish in a bid to imitate glass, and it works to an extent. From a distance, it is hard to distinguish between the Moto G6, which has an actual glass back, and the Moto E5 Plus. However, the plastic back of the latter gets scratched very easily and is a huge fingerprint magnet. It is also very slippery - we found ourselves dropping the phone on more than one occasion. On the plus side, plastic is less likely to shatter than glass.

Just like the Moto G6 Play, the fingerprint sensor on the Moto E5 Plus is embedded within the Motorola batwing logo at the back. The setup process is quite slow but the sensor is quick, accurate, and ergonomically placed. The back panel also houses what might at first appear to be a dual-camera setup, but in actuality is just a laser autofocus sensor alongside a single 12-megapixel camera. The left edge of the smartphone is blank except for the SIM tray which has separate slots for two Nano-SIMs and a microSD card. The right edge houses the volume rocker and the power button, which are small but tactile. The earpiece doubles up as a speaker, and the sound it produces is loud, but shrill and tinny.

A microphone and a Micro-USB port can be found at the bottom. The use of a Micro-USB port is a bit disappointing at a time when the industry has started transitioning to the new USB Type-C standard.

Moto E5 Plus specifications and display

Priced at Rs. 11,999, the sole configuration on offer has 3GB of RAM and 32GB of storage, which can be expanded using a microSD card (of up to 128GB). The biggest USP of the Moto E5 Plus is its 5,000mAh battery, which Motorola claims is good for 18 hours of non-stop video playback. Connectivity options on the handset include 4G VoLTE, Wi-Fi b/g/n, Bluetooth 4.2 LE, GPS/ A-GPS, FM radio, a 3.5mm jack, and a Micro-USB port. NFC is not supported, and neither is the 5GHz Wi-Fi band. It supports dual SIMs (Nano) but only one can run at 4G speeds at a time, with the other limited to 3G speeds. The Moto E5 Plus has a 6-inch HD+ (720x1440 pixels) IPS LCD screen with an 18:9 aspect ratio. The screen is not exactly borderless, and the chin is pretty significant. On the Moto G6, this space houses the fingerprint sensor, but here it feels like a waste.

Viewing angles are decent and colours are vibrant enough for the price, but the panel is dim and and very reflective. Additionally, text and images are not very sharp, as a result of the lacklustre HD+ resolution, and pixelation is visible to the naked eye when reading text. On a positive note, the Moto E5 Plus has a stellar always-on display feature that allows for quick replies to messages right from the lock screen, and a blue light filter that can be triggered at set times.

Moto E5 Plus performance and software

The Moto E5 Plus is fairly capable of handling basic day-to-day tasks such as watching YouTube videos, taking the occasional picture, light Web browsing, and using social media applications. That said, we did experience some keyboard lags, and occasional stutters and slowdowns throughout our review period. With multiple apps open in the background or more than a dozen tabs open in Chrome, we could feel the effects of the relatively under-powered processor. At least this smartphone does not heat up when pushed.

As expected, benchmark scores were quite average. The Moto E5 Plus managed 56,264 points in AnTuTu, 623 and 2098 respectively in Geekbench's single-core and multi-core tests, 3,747 in PC Mark's Work 2.0 benchmark, 10fps in GFXBench Manhattan 3.1, and 26fps in GFXBench T-Rex. Games like Subway Surfers and Asphalt 8 exhibit occasional frame-rate drops and stutters, but are playable on the whole. 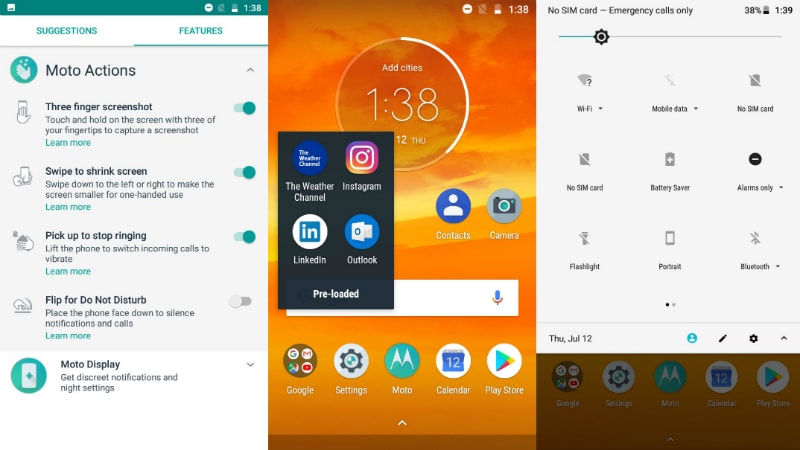 One thing that helps the Moto E5 Plus run somewhat smoothly is Motorola's well-optimised software package. The smartphone runs a near-stock version of Android 8.0 with the March 2018 security patch installed. Motorola has added a few features such as an always-on display, three-finger screenshot shortcut, swipe gesture to toggle one-handed mode, and Attentive Display, which keeps the screen on while you are looking at it. Oddly enough, the most iconic and useful Moto Actions, the chop gesture to turn on the flashlight and double-twist to launch the camera app, are missing. Their presence in the international version of the Moto E5 Plus makes the omission even more disappointing.

Face recognition, a feature that is now common on most smartphones even in this price segment, is missing. Thankfully, the rear-mounted fingerprint sensor is quick and accurate.

There's no secondary sensor or AI wizardry for the camera on the back - just a single 12-megapixel camera with an aperture of f/2.0 accompanied by an LED flash. On the front, there's a 5-megapixel selfie camera with its own dedicated flash. Motorola has tried its best to make it look like there's a dual-camera setup though. The laser autofocus sensor is housed right next to the primary camera, which quite successfully gives the impression of a second lens, at least from a distance.

The rear camera comes with its share of problems - the dynamic range is poor and it has a tendency to overexpose shots. Photos taken at night look muddy and over-sharpened, and the camera bumps up the ISO which makes images look unnaturally bright. This is something we noticed with the Moto G6 Play as well. Shots taken in favourable light fare better. The level of detail is lacking but colours are accurate.

The story is pretty much the same with the front sensor. It struggles in low light, producing noisy images that lack detail, but performs just about decently in the day. The front flash does help quite a bit at night. 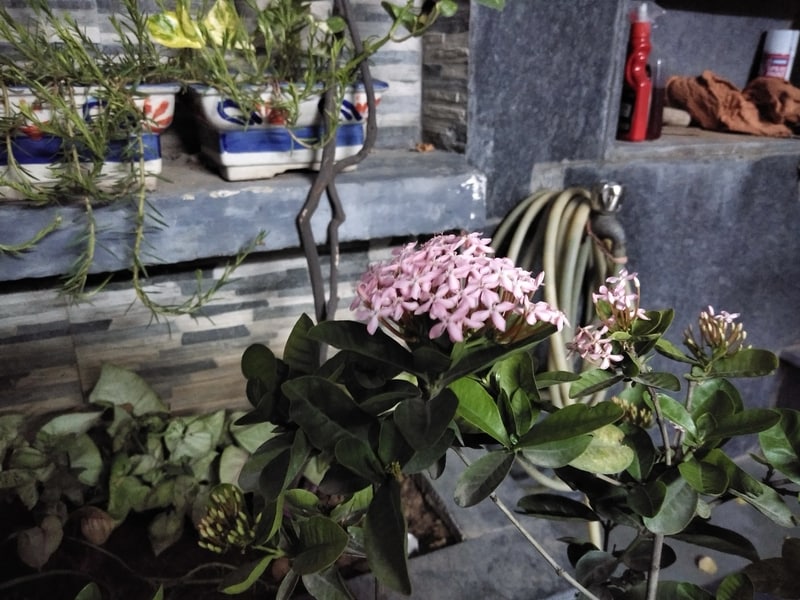 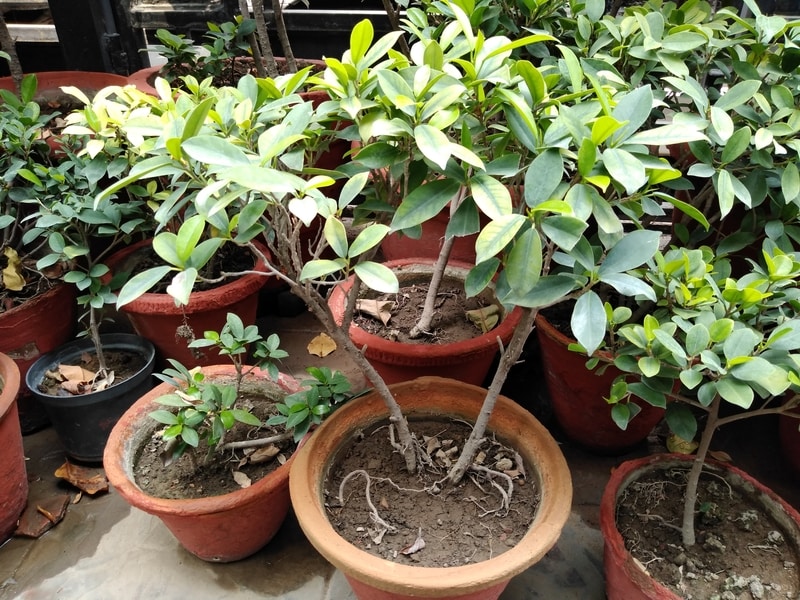 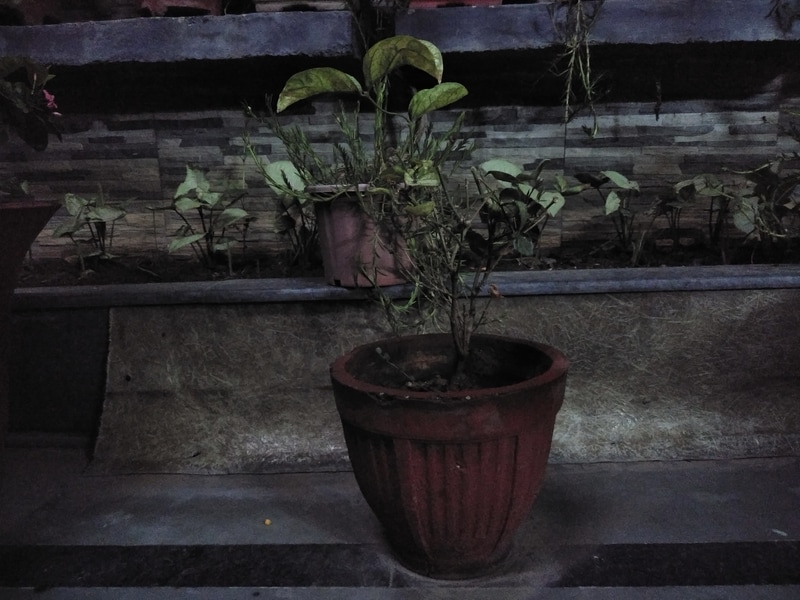 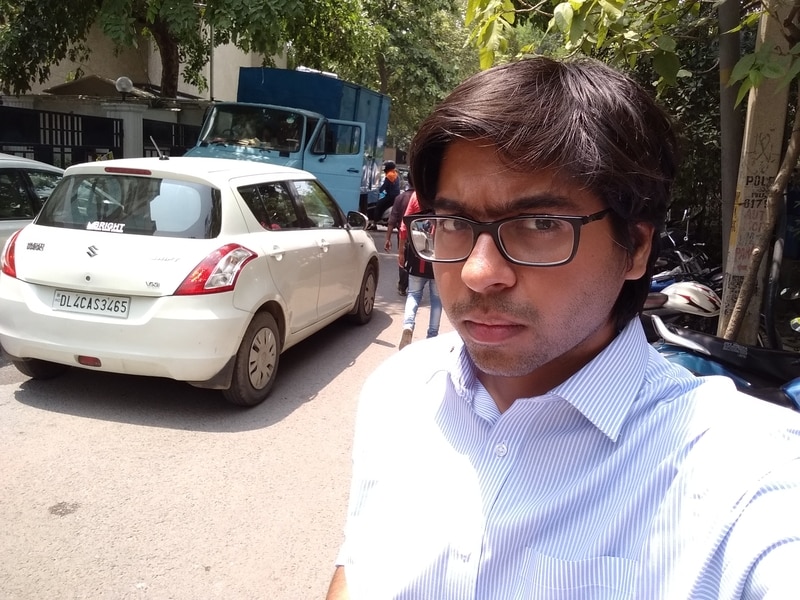 The camera app has a fully featured Pro Mode that allows you to adjust the white balance, ISO, exposure, and shutter speed. Video capture maxes out at 1080p (30fps) for the both the front and rear cameras. Videos shot with the front camera are jittery and lack detail. We were quite impressed with the electronic image stabilisation for the rear sensor, but the lack of detail in videos let us down a little.

In our HD video loop battery test, the phone managed to chug along for 11 hours and 30 minutes, which is a reasonable, if not a particularly great score; with a 5,000mAh battery under the hood, we expected more. Thankfully, real-world performance is stellar. The phone breezed through a day of moderate to intensive use, and still had about 50 percent left at the end. Our usage involved an hour or two of navigation using Google Maps, a generous dose of social media applications, games such as Asphalt 8, and taking a dozen or so selfies and pictures.

With moderate use, you can extract two full days of battery life out of this phone. Thanks to the HD+ display, there are less pixels to push and Motorola's software package is as optimised as ever. The 10W rapid charger that Motorola ships in the box took the smartphone from an empty tank to 36 percent in 60 minutes. The lack of Motorola's trademark TurboCharger is disappointing, especially for a phone with such a large battery. 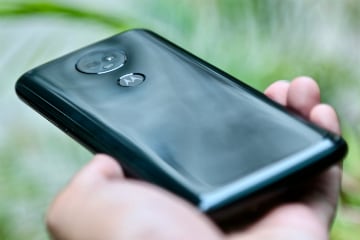 Moto E5 Plus in pictures

Verdict
The Moto E5 Plus delivers on the promise of exceptional battery life and has a design that imitates its higher-priced siblings. The software is well optimised and is quite close to stock Android. However, it does little to stand out in a segment dominated by heavyweights such as the Asus ZenFone Max Pro M1 (Review), Redmi Note 5 (Review), and Realme 1 (Review). The cameras are sub-standard, performance is just about okay, and the display is nothing to write home about. The lack of iconic Moto actions such as the double-twist, which have become well associated with Motorola phones, further reduces the smartphone's appeal.

Road warriors should should definitely consider the Moto E5 Plus. Others would be better served by the Asus ZenFone Max Pro M1, which is less expensive but features a more powerful processor and a higher-resolution display. Availability issues continue to plague Asus's smartphone though, and it is hard to find it in stock. Oppo's Realme 1 is another option has a powerful powerful processor and is relatively easier to buy, making it also worth considering.

product Moto E5 Plus has a hefty 5,000mAh battery, an expansive 6-inch 18:9 display, and a near-stock build of Android. Read our review to find out if it's worth buying.