Having just spent a lot of time with the Micromax Canvas 6 Pro (Review), it's now time to take a look at its lifestyle counterpart, simply called the Micromax Canvas 6. Priced identically to the Pro version, the company is essentially targeting two separate demographics here.

The new Micromax Canvas 6 is similar in specifications to the Canvas 6 Pro but has  a completely different aesthetic and additional features, so it's not the same phone with watered down specifications as the name might suggest. But is it enough to bring back the glory days that Micromax once enjoyed? Let's find out.

Look and feel
One of the highlights of the Canvas 6 is its unibody metal chassis, which looks particularly good in champagne gold. The build and finish are very good and the chamfered edges add a touch of class. The design itself isn't very iconic as one could easily mistake this for a Gionee or a Honor smartphone, were it not for the logo on the back. 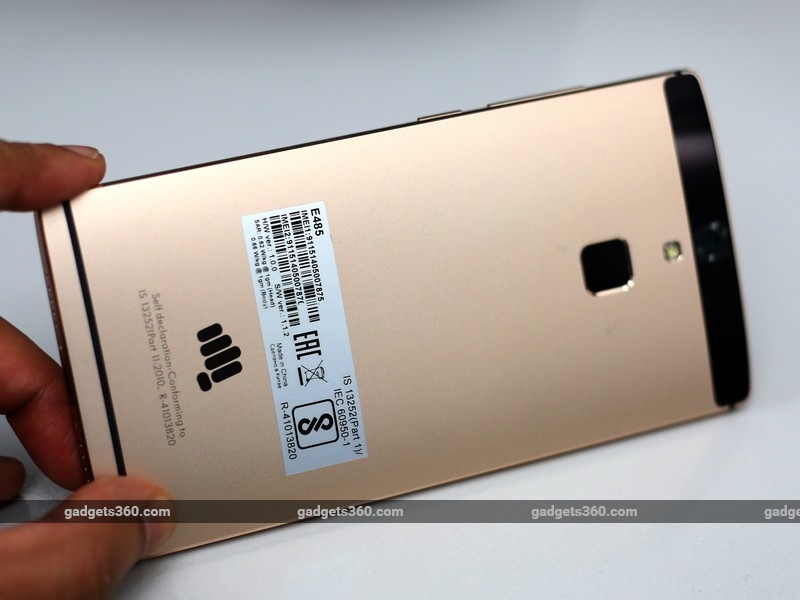 The phone has sharp lines along the edges, in stark contrast to the Canvas 6 Pro's design. It's quite a handful, and the metal does add a fair bit of weight, so be prepared for that. The sides are thick enough to offer a good grip but the smooth texture of the metal does make the phone slippery. The back is rounded so the phone doesn't feel like a block when you hold it.

The 5.5-inch IPS display gets a healthy full-HD resolution, which means pictures are sharp and colours are vivid. Sunlight legibility is also pretty decent as the Canvas 6 can achieve a good maximum brightness level. Gorilla Glass is absent here, possibly to compensate for the cost of the metal. There is a notification LED on the top, beside the 8-megapixel front camera. 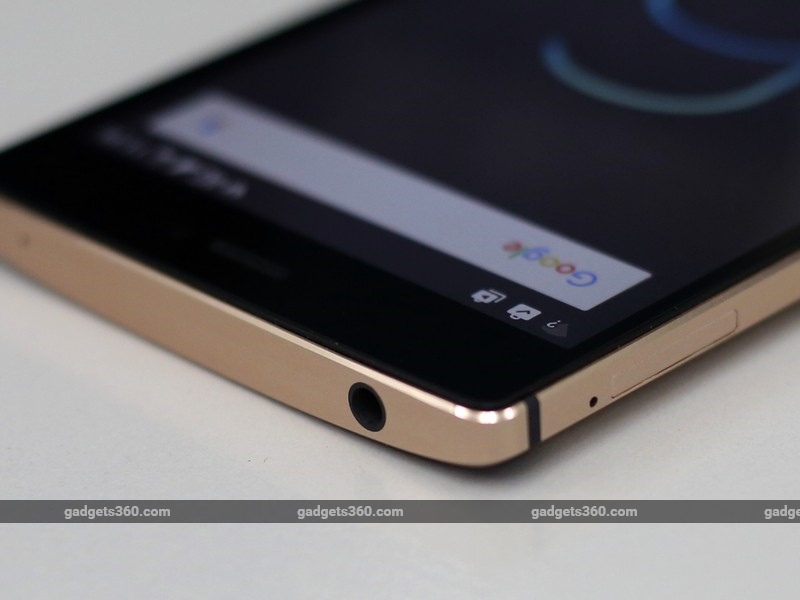 The hybrid SIM tray is placed on the left, and can accommodate either two Nano-SIMs or a single SIM and a microSD card. The volume rocker and power button are placed fairly ergonomically on the right, and have good tactile feedback. The Micro-USB port and speaker grille are on the bottom while the headphones socket sits on the top.

Around the back, we have the 13-megapixel camera, LED flash and fingerprint sensor. The latter is recessed into the metal chassis with a reflective coating similar to the strip around the camera above. The sensor isn't the fastest at recognising fingerprints but it does its job. We had a few miss-reads during our usage but nothing too severe. 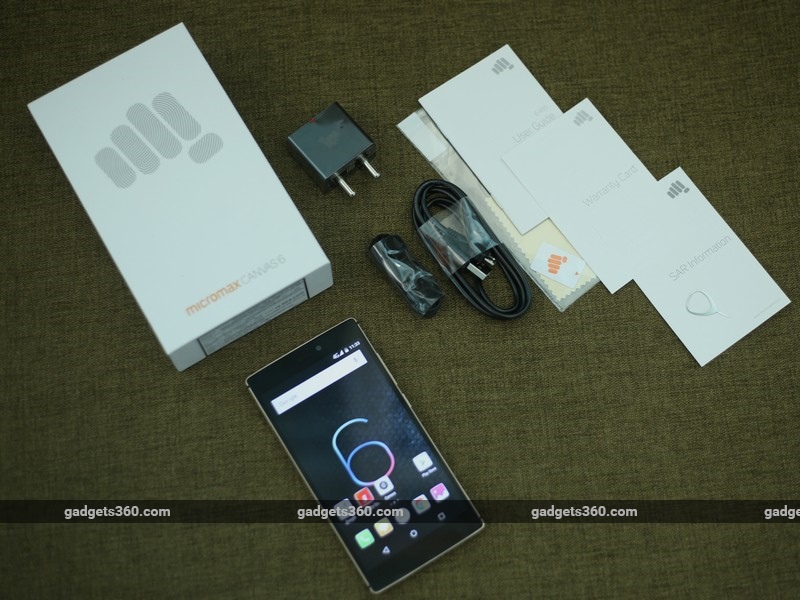 The phone comes bundled with a charger (7.5W), data cable, screen guard, SIM tray ejector tool, and an in-ear headset. Overall, the Canvas 6 is a good-looking phone and doesn't seem out of place in today's times. It's unfortunate that Micromax ditched the Gorilla Glass on this one, which is kind of an important feature that most look for.

Specifications and software
Since the Canvas 6 is designed keeping the lifestyle demographic in mind, there isn't much emphasis on the specifications. Still, it's not like Micromax has skimped here as you still end up with a decently powerful octa-core SoC from MediaTek (MT6753T), 3GB of RAM, and 32GB of onboard storage. The internal storage can be boosted by up to 128GB using a microSD card. Other specifications are fairly standard: Bluetooth 4.0, Wi-Fi b/g/n, USB OTG, GPS, FM radio and 4G LTE for both SIM slots. 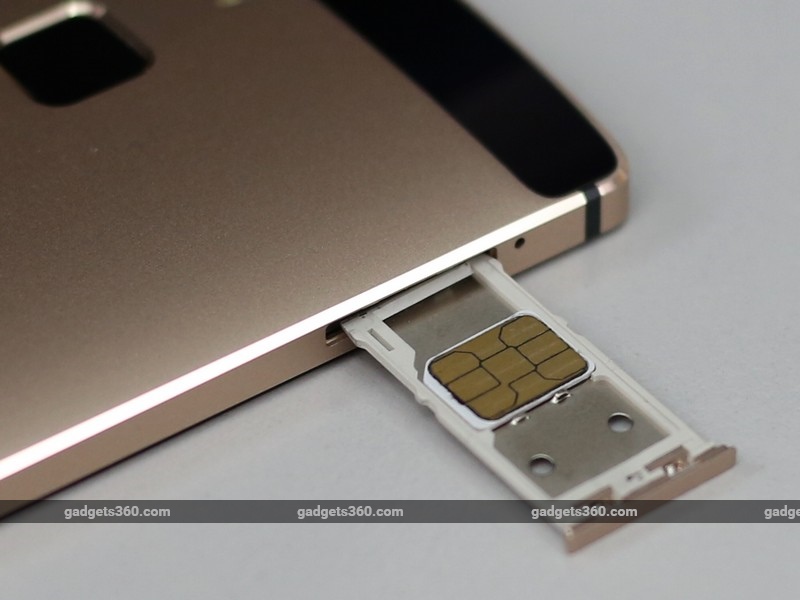 In terms of software, we have a close-to-stock version of Android Lollipop, apart from the custom icon pack and few other additions. Swiping right from the first home screen takes you to Micromax's Around service, which gives you access to services that have partnered with Micromax. It lets you order food, book a cab, book flights and accommodation, and even recharge your mobile, data and DTH services. Micromax has also added its own cloud backup feature which lets you backup your contacts, call logs, SMS and other data to the cloud. You get a bunch of free apps and games which we've covered in detail in the Canvas 6 Pro review.

Performance
Its overall size does make the Canvas 6 a little cumbersome to carry around and the sharp edges around the phone aren't very pleasing when you hold it after a while. Despite the metal body, we didn't have any overheating problems. The phone does get warm when you charge it or play a heavy game for long periods of time but that's to be expected.

App performance is pretty good too as we got a score of 36,996 in AnTuTu, which surprisingly, is more than what the Canvas 6 Pro delivered. Scores from other benchmarks were considerably lower, however, and 3DMark Ice Storm Extreme returned 4361 points while GFXbench managed to churn out only 13fps. In the real world, we didn't face any issues when playing games like Dead Trigger 2 or Alto's Adventure. 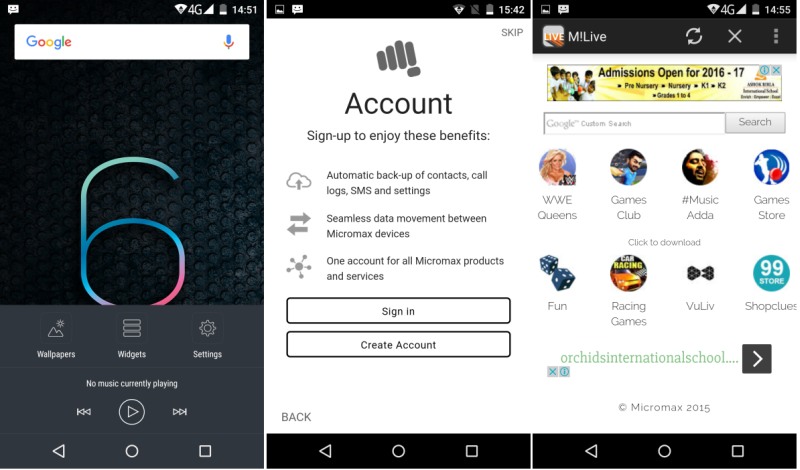 Micromax uses the Gaana app for streaming as well as playing your local music files. Audio quality is decent through the mono speaker and strictly average with the bundled headset. There are also equalizer presets to play around with. The video player app handles full-HD videos well along with high-bitrate ones. You can also loop or trim a video from within the player itself. 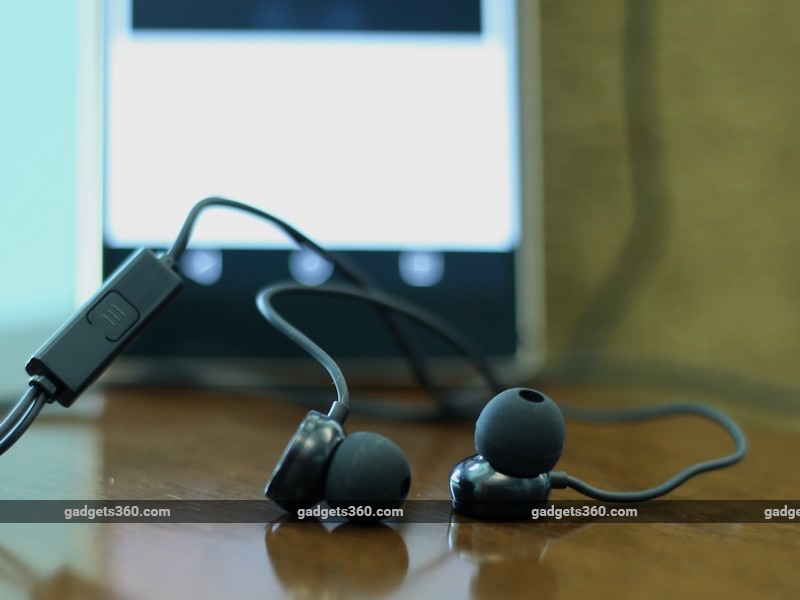 The rear camera has PDAF (Phase Detection Autofocus) so focusing speed is decent. However, there is an element of shutter lag, which gets worse in low light. The level of detail in landscapes is not bad but images appear a bit dull, even in daylight. HDR fixes this to an extent and also adds some much needed sharpness to the images. However, zooming in all the way revels some degree of artefacts and chromatic aberration in distant objects. Macros fare better as the sensor is able to get capture good detail. Low-light shots are below average, sadly. There's way too much noise and details end up looking blotchy. 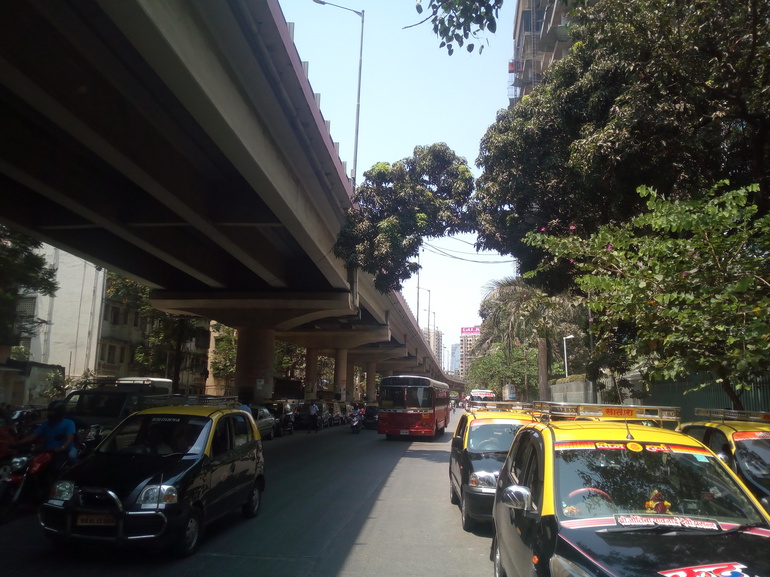 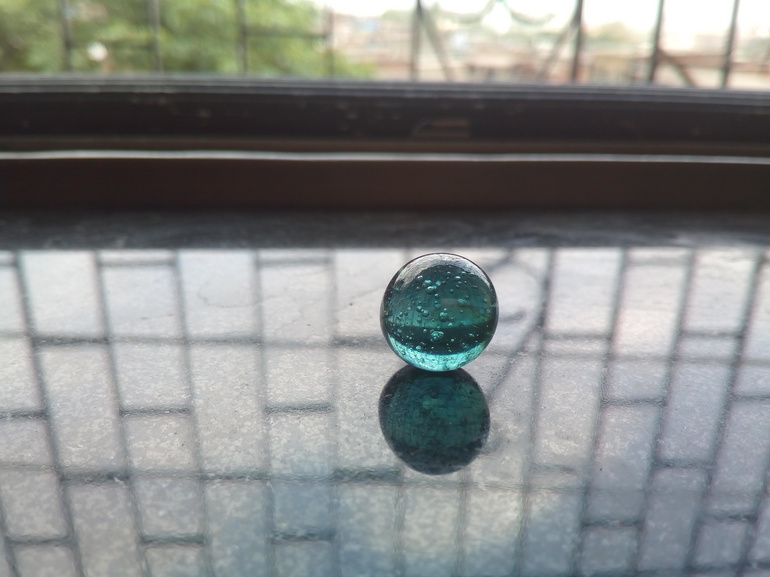 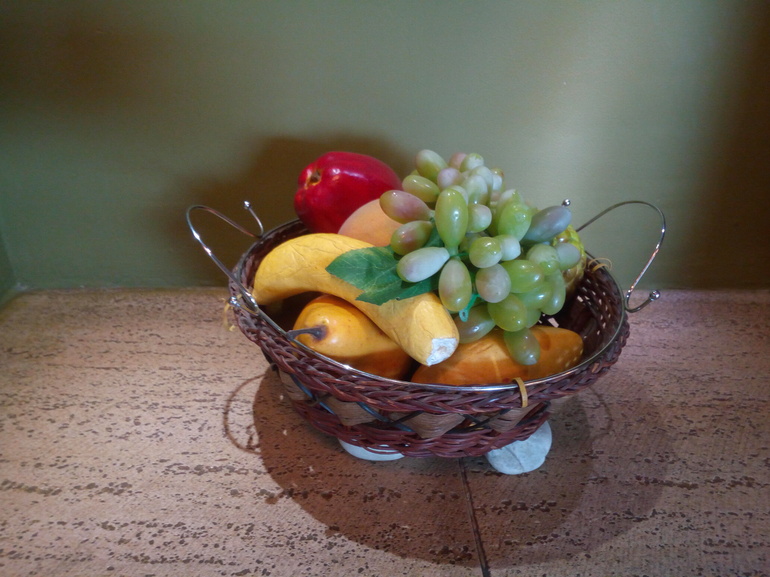 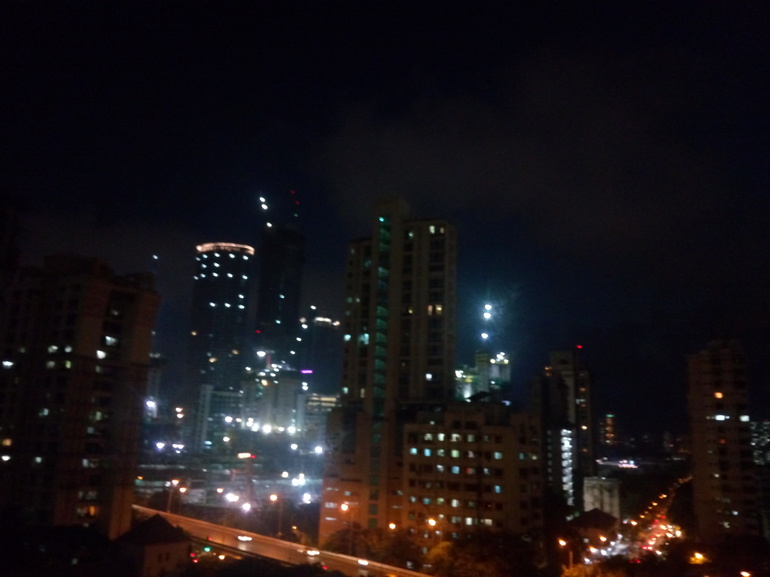 The front camera takes passable selfies but nothing to shout about. The camera app hasn't changed much from what we'd see on budget Micromax phones. You have your shooting modes to the left, which include Face Beauty, Panorama, Multi-Angle View, Motion Track and Live Photo. You can toggle between HDR, Smile shutter and flash with the shortcuts on the top. Swiping up reveals the different filters available.

You can tweak the camera and video settings such as Face detection, Voice capture, Anti shake, Zero shutter delay for stills and Noise reduction, EIS (stabilisation) and Time lapse for video. You can manually set the exposure and white balance if needed but there isn't a 'Pro' mode which lets you do this on the fly. Video recording maxes out at 1080p but the quality is strictly average at best.

Battery life
The 3000mAh battery managed 8 hours and 37 minutes in our video loop test, which is pretty average. Under regular use, we managed to go a little more than a day before needing a charge. 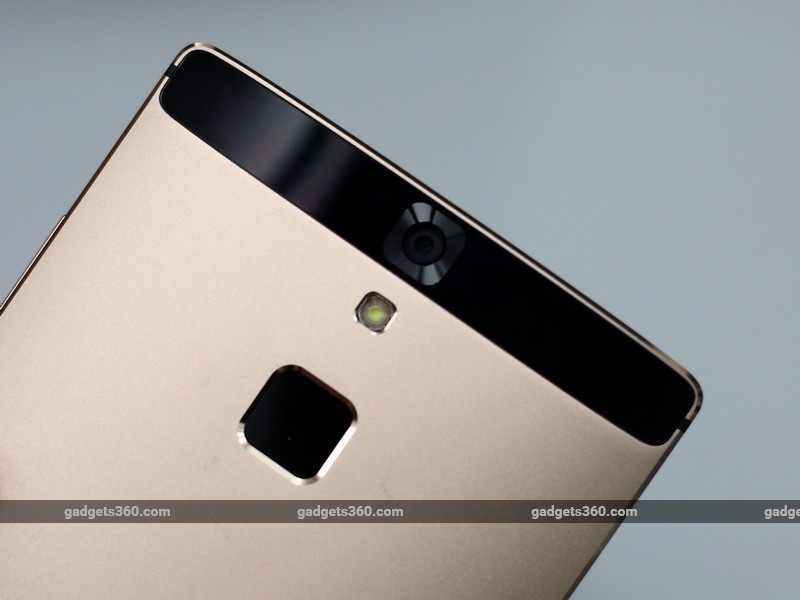 Verdict
Micromax's strategy of pricing two models exactly the same but targeting two different demographics makes sense. Unfortunately, the company hasn't implemented this very well, because after looking at both phones, the Canvas 6 is the obvious choice between the two. Had Micromax gone with a better CPU in the Pro version and gone with a better camera, then it probably would have stood apart more. As it stands, the Canvas 6 is the better of the two simply because it has a better (metal) body and aesthetics, fingerprint sensor, twice the onboard storage, and better battery life.

Things could have been even better though. We can't understand why Gorilla Glass was left out as it's a crucial component that most people look for when buying a phone. Also, the camera could have been better and it wouldn't have hurt to have support for VoLTE or even faster Wi-Fi standards. Finally, as striking as it looks, the sharp lines across the body make it less ergonomic to hold.