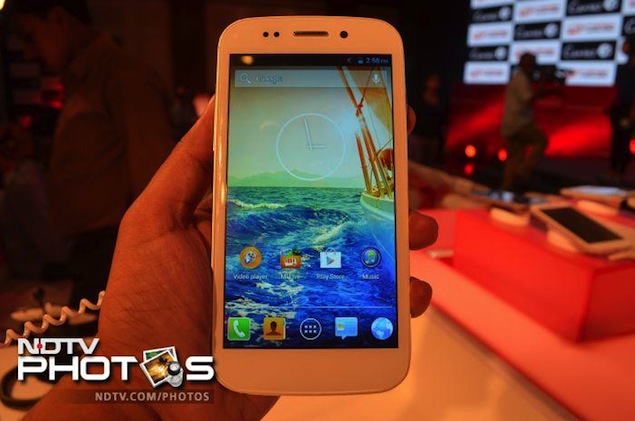 Micromax Canvas 4, the Indian handset maker's much hyped flagship phone, launched on Monday at a price point of Rs. 17,999.

While Micromax always tries to focus on delivering upgraded specifications at economical price points, this time it has taken a different course. With the Canvas 4, the company's key focus areas are the build and construction of the device and a differentiated user experience. Here's what we think about the device after having spent some time with it.

Micromax A210 Canvas 4 has to be the best Android device from Micromax in terms of the fit and finish. While the device is not completely made of metal, it does sport an aluminium frame that gives it a premium finish. It also feels more solidly built compared to other phones made by Micromax. We got a hands on of the White colour variant of the phone, though a Grey variant is also available.

The front of the phone is dominated by a 5-inch IPS display panel that sports a resolution of 720x1280 pixels. We were expecting the phone to feature a 1080p display and were a bit disappointed. Having said that, we found the display to be pretty decent, similar to the one we've seen in the Micromax Canvas HD. Colours look vibrant and images and text rendered sharply. Viewing angles were also good. We also found the touch on the display to be more responsive than the Canvas HD and other phones in the Canvas series. Micromax claims that one can even operate the phone with gloves on, due to the increased sensitivity of the display.

Just below the display, there are capacitive touch keys for Menu, Home and Back navigation functions. The sensor array and the 5-megapixel front camera are located above the display just adjacent to the chrome grill earpiece. The edges of the phone are bevelled when they meet the aluminium frame.

The Power/ Screen lock key is located at the right hand side, towards the top, while the Volume rocker sits at the left hand side. Both these keys sport a metallic finish and offer good tactile feedback.

Interestingly, the Canvas 4's aluminium frame also features small bands at the left, and at the top and bottom edges, similar to the ones we've seen on the iPhone 5 and HTC One. As per the company the frame also acts as an antenna, just like it does in the iPhone.

The 3.5mm headset jack sits at the top of the phone, while the micro-USB port is located at the bottom.

The back comprises of a removable cover made of plastic that sports a mild texture in a somewhat matte finish. It features the Micromax branding, a small speaker outlet, the phone's 13-megapixel rear camera lens and a round LED flash.

Coming to the Canvas 4's software, we'd like to point out that it runs Android 4.2.1, the latest iteration of the operating system, with some of its own UI modifications on top. The first thing that we noticed while using the handset is that there was no visible lag, at least with the set of preinstalled applications.

The Canvas 4 also boasts of some extra bells and whistles including a 'blow to unlock' feature - yes, that's what it's called. You can just blow some air on the phone's screen to unlock it. Just like some of Samsung's latest Galaxy smartphones, the phone features a pop-up video player, that lets users watch a video while doing some other task on a floating window, auto-pause videos when you're not looking at the phone's screen, answer phone automatically when you bring it your ear, flip to silent and preview other videos in the gallery while playing one, among other features. It also brings some new camera tricks such as multi-dimension Panorama and a photo solid mode for increased precision.

Overall, the phone delivers a good package, incorporating a balanced set of software and hardware features, though features like blow air to unlock, appear to be gimmicky. Those hoping for a significant upgrade over the Canvas HD in terms of specs would obviously be disappointed, but Micromax has tried to pack in other things.

Watch out for our full review of the Canvas 4.