A few months ago, the Jio Phone grabbed everyone's attention for delivering smartphone-like capabilities at a feature-phone price. It triggered manufacturers to push down the prices of VoLTE-enabled devices.

One such product is the Bharat 1, which was launched by the Indian device maker Micromax in partnership with BSNL to take on the Jio Phone. Can it offer a competitive balance of cost and features? Read on, we have the answers.

The Micromax Bharat 1 sports a 2.4-inch display and has a numeric keypad at the front. The display has a resolution of 240x320 pixels. Viewing angles aren’t good and colours appear washed out. There are two function buttons, a D-pad with a centre button, call and disconnect buttons, and the number pad. The buttons are made of plastic and have blue backlighting. The keys are hard to the touch but have a reassuring click. The earpiece doubles up as a loudspeaker. The phone also has a VGA selfie camera on the front and a 2-megapixel primary camera on the back.

The rear cover pops off to reveal a removable 2000mAh battery. Under that are two Micro-SIM slots and a dedicated microSD card slot. The Bharat 1 has a Micro-USB port and a 3.5mm headphone jack next to it. Like many other feature phones, it also has an LED torch on the top, which you toggle by pressing down on the D-pad's centre button. 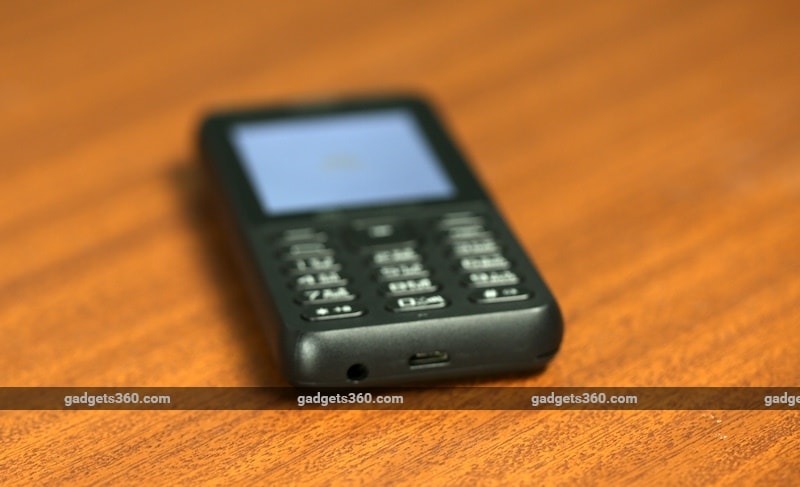 Micromax ships the Bharat 1 along with a hedaset and a charger with an attached Micro-USB cable. The charger is rated at 3.5W and takes over three hours to fully charge the phone's battery. A detachable Micro-USB cable would have been helpful for transferring files to and from a computer.

The specifications of the Bharat 1 look rather good for a Rs. 2,200 phone. It is powered by a dual-core Qualcomm Snapdragon 205 processor and has 512MB of RAM. There is 4GB of internal storage, out of which you get around 2.13GB to use. Storage is expandable using the microSD slot, and cards of up to 128GB are supported. When connected to a computer the phone goes to storage mode by default, allowing you to transfer files easily.

Unlike the Jio Phone (Review) which has only one SIM slot, the Bharat 1 is a dual-SIM device. There is support for 4G and VoLTE but only on the first SIM. The SIM in the second slot is restricted to 2G/3G networks and there is no way to determine what speeds you are getting at any point. We found that the phone isn’t locked to any carrier and worked fine when we tested it with multiple SIM cards.

There is support for Wi-Fi, which can be used to access the internet without using mobile data. There is also support for Wi-Fi hotspot functionality and USB tethering. Bluetooth connectivity allows you to exchange files with other devices. There is no NFC. Surprisingly, you do get GPS, but there is no app to use it with.

Micromax told Gadgets 360 that the Bharat 1 runs on a customised version of Android. The company didn't provide specific details and it isn't stated clearly anywhere, but we saw a few hints that at least some apps, services and UI elements were designed for Android 4.4 KitKat, which is now several years old. There is a tiled menu instead of an app drawer. and everything is accessed using the D-pad to navigate and the centre button to select. Navigating through the menu is easy, and the function keys flanking the D-pad work as ‘option’ and ‘back’ buttons. Sadly, the four buttons of the D-pad itself aren’t mapped as shortcuts, which could have helped to launch apps quickly.

The Bharat 1 has preloaded icons for WhatsApp and Facebook Lite but these need to be downloaded before you can use them. T9 predictive input is enabled on the keyboard by default but you can switch between different input methods. The D-pad can be used to move a cursor around in several apps but it's clunky. For example, WhatsApp doesn’t feel fully optimised for such phones. On the other hand we tried video calling on WhatsApp and we could carry on a conversation without any issues.

Micromax also offers a link to the YouTube website, a Web browser, music and video players, a file manager, and FM radio in terms of apps in the menu. There is a Fun app powered by Zenga TV that gives you access to live TV, videos and movies, but the content on offer is far less than what you get through Jio's apps. Also, the screen isn’t suitable for watching content because of its size and poor viewing angles.

Considering that this phone runs Android, we did try to sideload a few apps but Micromax seems to have disabled app installations. There is no way to enable this, which means you can't take full advantage of the Android operating system. Also, unlike the Jio Phone, there is no voice assistant and you do not have the option to connect to a TV to watch content.

The Bharat 1's hardware is extremely basic, and the underlying software isn't as functional as Android on a smartphone, so we didn't have very high expectations. The performance of the phone is average and we did see lag when doing things like dialing numbers and typing. Even at a normal pace, the dialer would fail to register a few digits at the beginning of a phone number. The pre-installed video player does not support all formats, but it could play an HD video file that we tested it with. If you have used Android on a touchscreen, using it with a keypad might feel a little weird at first. However, first-time users of a smart feature phone like this should adapt to it fairly quickly.

The battery life on the Micromax Bharat 1 is quite good. With light use limited to a few calls and a few WhatsApp messages we could go on for over two days with some juice still left. Since there is no way of installing more apps, you can expect similar battery life. However, if you use the phone as a hotspot, especially with multiple devices, the battery does drain quite quickly. You can also use USB tethering to charge the device while sharing data. 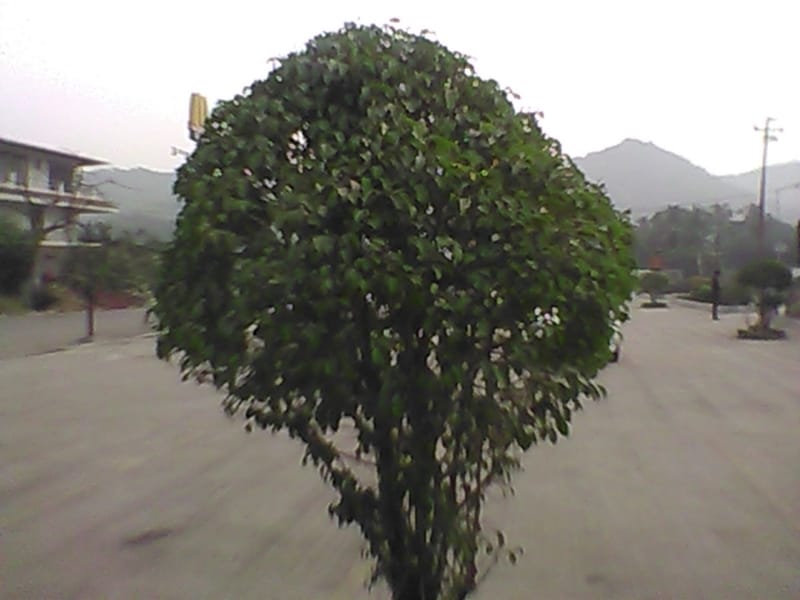 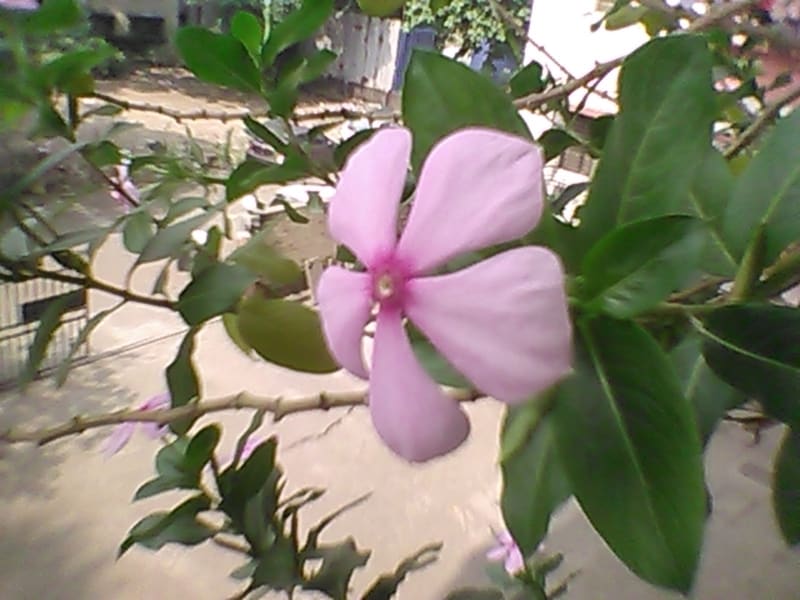 The Bharat 1's rear camera does not have autofocus which is acceptable considering its price. We found the viewfinder to be laggy even during the day, and nearly unusable in low light. The app is basic, with the D-pad allowing you to switch modes and zoom. The app also lets you change white balance, and set the exposure level and a timer if required. There is location tagging which uses the GPS chip on the device.

The setting to switch between the rear and the selfie cameras is buried in the settings list; a quick toggle would’ve been more user-friendly. These cameras are barely functional and the output looks good only when viewed on the Bharat 1’s tiny display. Photos lack detail and most will end up blurry if you don’t stand perfectly still after clicking the shutter. We also saw chroma noise in most photos taken indoors. Both the front and rear cameras can record video at VGA (640x480) resolution but the output is sub-standard.

If you want a low-cost phone for basic calling, Facebook and WhatsApp, then the Micromax Bharat 1 fits the bill. You will have to shell out Rs 2,200 for the Bharat 1 and you can use it with any network provider of your choice. The advantage of using BSNL is that you can use a special Rs 97 recharge pack which gives you unlimited calls and data only for the Bharat 1.

The Wi-Fi hotspot and USB tethering capabilities, and the fact that this phone has two SIM slots and isn’t locked to a single carrier, give it a slight edge over the Jio Phone. On the other hand, you don't get as much entertainment content. However, Micromax seems to have limited the usability of Android by restricting the sideloading of apps. Since there is no Google Play store and no way of installing more apps, you have to live with what you get. If you are looking for your first smart feature phone or at a secondary backup device, the Bharat 1 should be able to keep you happy.

product The Micromax Bharat 1 is a smart feature phone that comes preloaded with WhatsApp and Facebook. But is that enough to give it an edge over the Jio Phone?