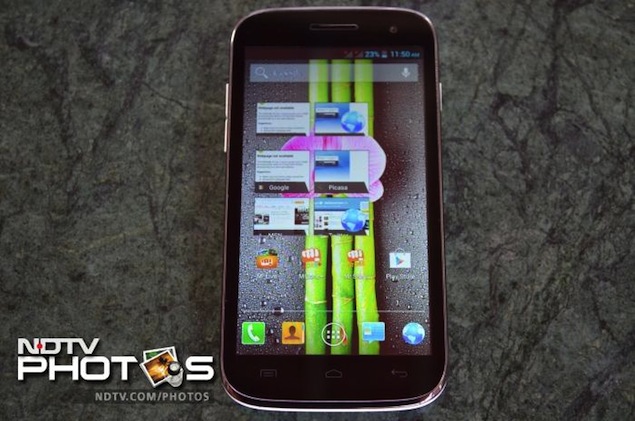 Micromax A116 Canvas HD is the successor to the company's popular budget phablet (large screen phones that are considered to be a phone-tablet hybrid), the A110 Canvas 2. The company has bestowed the phone with an HD screen, has put a quad-core chip, under the hood, and has doubled the on-board RAM. The phone was announced in January, but made its debut around 10 days back, generating a great response among new and potential customers, clocking in 9000 unit sales in a day, in addition to generating a lot of buzz in general. So does the Canvas HD live up to the hype? We try to find out.

On closer inspection, you'll gather that the front of the phone is black in colour, while the back is white. Looking from the sides, it gives the impression that the phone bears both colours since the removable back cover doesn't just cover the back and extends to the sides. We didn't like the dual-colour design concept, but some might find it interesting.

The screen forms the largest part of the front and the bezel is, thankfully, much thinner than that of the Canvas 2. The three capacitive navigation buttons sit below the screen, while the earpiece (also black in colour), notification light, and the front facing camera, are located above the screen. To be honest, the front has a very plasticky feel to it, but then this phone costs Rs. 13,990, so you don't expect premium materials to be used. However, the screen gets smudged easily, even without our hands being sweaty.

The back of the phone, which features a removable back cover, has also been done in plastic, sports a glossy finish and is less prone to smudges. The 8-megapixel camera lens protrudes out a bit, similar to the HTC One X camera lens. The LED flash and a secondary microphone are located adjacent to the lens. There's Micromax branding and a speaker grill towards the bottom. The back cover hides the battery compartment, above which there are two SIM card slots and a slot for the microSD card. 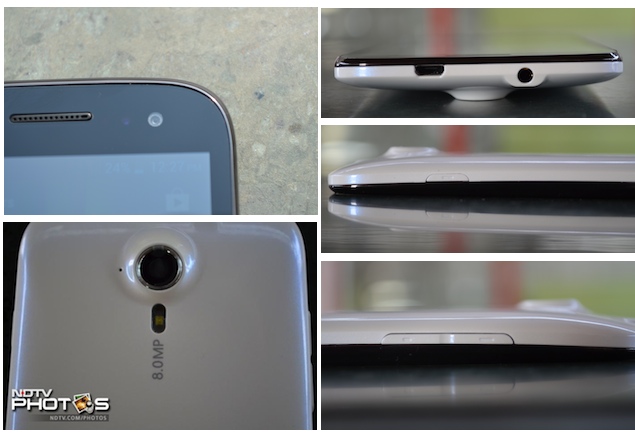 At the right side, you can see a Power/screen lock key, which is also white in colour. This button is a little recessed and at times gets a bit hard to press. The volume rocker sits at the left side and is easy to press. At the top, you'll find the 3.5mm headset jack and a micro-USB port. There's just a microphone at the bottom edge.

Overall, we felt that Micromax could have used better quality materials but it would have to cut corners to reduce the price of the device, so it's understandable.

Display
The USP of the Canvas HD is indeed its HD screen. The phone's 5-inch HD IPS screen sports a resolution of 1280 x 720 pixels and a colour depth of 16.7 million. Thanks to the higher resolution, text, icons and images look much sharper compared to the Canvas 2 and the recently launched Samsung Galaxy Grand. There was no pixelation. However, we felt that the screen contrast was a little haywire, resulting in images appearing to be washed out.

Under sun visibility was good though the screen is very reflective. Thanks to the IPS panel that facilitates wider viewing angles, we found that the viewing angles were indeed wide, which essentially means that more than one person can view content playing on the screen properly, even from different angles. We also found the touch response of the screen to be good.

Software/ Interface
The Micromax Canvas HD runs Android 4.1.2 (Jelly Bean). Micromax has skinned some elements of the user interface, such as the app icons and the notification tray. The notification tray includes toggles for settings such as Wi-Fi, Brightness, Rotation, Bluetooth, GPS, Data, Screen timeouts and profiles (for alerts and other notifications). There's also a SIM selection toggle. Similar to most other Android devices, there are five customisable home screens that can be filled with app shortcuts and widgets. 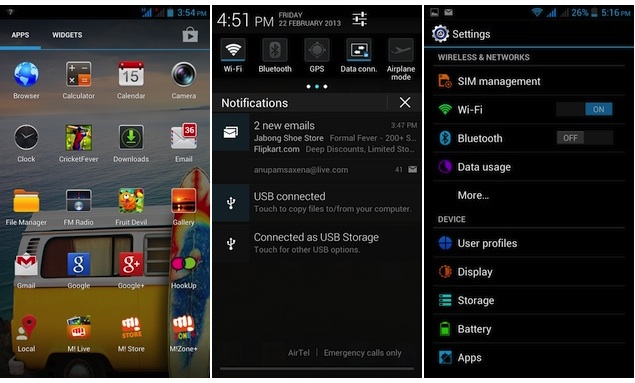 The notification tray also features a settings shortcut and a clear all notifications button, along with expandable notifications (expanded with the two finger pull gesture). Android 4.1 Jelly Bean also brings in Google Now, which needs to be initialised for the first time, before use.

For the uninitiated, Google Now is a voice based information assistant and an extension of Google search. You can ask questions and the tool returns answers or search results. It uses 'cards' which are essentially small boxes that offer different sets of information ranging from weather forecast, directions, traffic information, scores, appointments, and currency conversion, among others. Google Now collects information based on the user's behaviour, location, and even e-mail, to offer information automatically.

The three capacitive buttons, Home, Menu and Back help in navigating through the phone, with the Home button also doubling up as an app switcher on long press.

Micromax has also included some of its own apps including content stores, M! Store and M! Live, and services store, M! Zone, in addition to its messaging app, HookUp, and friends locator app, M! Buddy and a few 'try and buy' games (Fruit Devil, Cricket Fever). The handset also offers FM Radio and FM radio recording.

Micromax has also modified the Messages app, adding a Smileys input option next to the text entry prompt, and a button for attaching multimedia, contacts and audio clips, among others, with it. Micromax has also added a file manager app, a NoteBook app, a ToDo app, in addition to a universal search app, and a video player app. It has also replaced the stock camera app with a different one. The company has also included a Wireless Input Device app, letting users configure a Bluetooth-based input device with the phone.

Micromax has also modified the Phone Dialler app giving the option of calling from any one of the SIMs. The dialler resembles the iOS dialler in terms of the colour scheme.

Camera
The phone features an 8-megapixel autofocus shooter that takes decent images in daylight. However, we found the photos taken through the phone a bit overexposed, and the white-balance in the automatic mode was not optimal. This results in images appearing to be a bit whiter, and colours looking a little dull.  Indoor shots were above average. We also found that the camera took some time to focus. The camera takes good quality videos depending on the ambient light. However, it saves video clips in .3GP file format, which is an older file format.

As we mentioned before, Micromax has put its own camera app. The app leaves out the Panorama mode, but offers a burst mode, letting users click up to 99 shots at once. We also noticed that there is minor gap between two consecutive camera shots in the continuous shot mode. The phone offers three basic modes - Face Beauty, HDR and Photo. The photo mode allows users to modify settings like Exposure, colour effect, ISO and white balance, among others. There's a self timer of up to 10 seconds as well.

The phone also features a VGA front camera, which takes average pictures, and can be used for video conferencing. We wish the phone had a dedicated camera button to help click a quick picture.

Performance
The Micromax A116 Canvas HD is powered by a 1.2GHz MediaTek MT6589 quad-core processor with 1GB RAM onboard, and PowerVR SGX544MP chip for processing graphics. There is 4GB of internal storage, which is expandable up to 32GB via a microSD card.

With Android 4.1 Jelly Bean, the overall experience of navigation through the interface was impressive, thanks to Project Butter and the phone's quad-core processor. We did not experience any lag while launching apps, playing games, scrolling web pages or switching between apps. It is safe to say that performance wise, the Canvas HD trumps other phones in this price range. Even the more expensive Galaxy Grand loses out to the Canvas HD in terms of benchmarks, but end users are unlikely to note significant performance difference between the two, unless they are playing CPU-hungry games (Hint: The Canvas HD performs better). 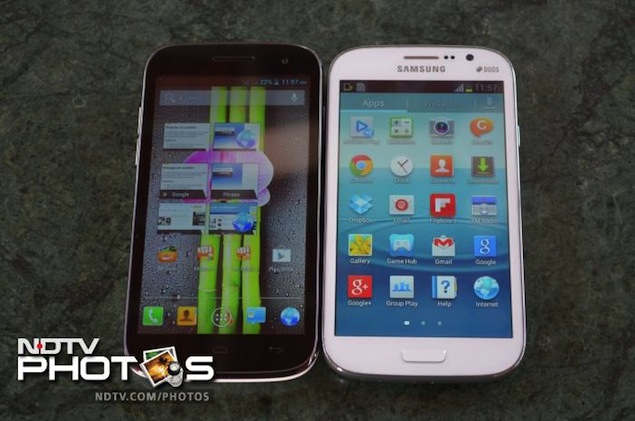 The phone comes with a 2,000mAh battery, and based on our experience, it will just about last you a full day. We charged the phone in the afternoon (at around 2pm), and with medium to heavy usage, including 1-1.5 hours of phone calls, two e-mail accounts with push notifications, screen at maximum brightness, playing some music and video clips, Twitter notifications and WhatsApp chats, the phone lasted 8-9 hours. It's also worth pointing out that we had turned off Wi-Fi and auto-brightness, and the phone was hooked to a 3G network. Altering these settings might help in running the phone for a longer duration, depending on your usage pattern.

Verdict
The Micromax A116 Canvas HD is a worthy upgrade to the A110. A 5-inch screen phone, with a quad-core processor, running Android 4.1 Jelly Bean, at a price point of Rs 13,990 is indeed a value for money proposition.

Other phones in the same range include the Karbonn S1 Titanium, which also has a quad-core processor, and sports a 4.5-inch qHD (960x540) multi-touch capacitive touch display and runs Android 4.1 Jelly Bean. The phone's been priced at Rs 10,990 and pre-bookings  have already started. The XOLO A1000 is another phone to look out. But we'd wait until we've had a chance to run these phones through our tests before recommending.

The Samsung Galaxy Grand is another budget phablet, if you don't mind spending Rs 6,000 to Rs 7,000 extra for a phone which has an inferior screen and battery life compared to the Canvas HD, but a better camera and bears the Samsung brand name.

Overall, the Micromax A116 Canvas HD seems to the best Android budget phablet we've come across so far, and we have no qualms in recommending it.

Micromax A116 Canvas HD in pictures