Is LG’s latest attempt enough to compete against Xiaomi and Realme?

LG has been investing a lot in the marketing and promotion of its smartphones, among other products, but it's still struggling to find its footing among competitors. While Huawei, Oppo, and Vivo have seen good year-on-year growth for global phone shipments, LG had the biggest decline in this respect.

LG has recently focused mostly on its yearly flagship G-series and V-series refreshes, but these are generally very expensive phones. The more mass-market models in the K-series and Q-series haven't really been home runs in our opinion, and with the surge of newcomers such as Realme, it's now more difficult even for a heavyweight brand like LG to compete.

The company hopes to turn things around with its new W-series of smartphones. Aimed at Internet-savvy buyers, the new LG W10 and LG W30 are now available through flash sales on Amazon. The LG W30, which we have for review today, boasts of three rear cameras, a notched display, and a big battery. This phone definitely looks the part, as we said in our first impressions of it, and now it's time to see whether LG has made a competitive enough phone that's worth considering at nearly Rs. 10,000.

LG has given the W30 a premium look, thanks to its chrome-plated sides and a brushed aluminium pattern on the back, which is covered with 2.5D curved plastic. The Platinum Grey colour that we have looks quite striking, although if you really want to make a statement, you could consider the Thunder Blue version. The front glass and the sides have rounded edges, making the LG W30 very comfortable to hold. This phone isn't too heavy at 172g but it is a little bit on the thicker side at 8.5mm.

The power and volume buttons don't have a lot of travel, so they don't wobble around when you go to press them. The LG W30 feels well put-together and the plastics used seem to be of high quality. We didn't notice any scuff marks or scratches on the laminated back during our review period, which is good.

However, the display resolution is only HD+ so images and text are missing a certain degree of sharpness. There's no mention of any reinforced glass, but we're happy to say that the display managed to stay scratch-free during our review period of a few days. 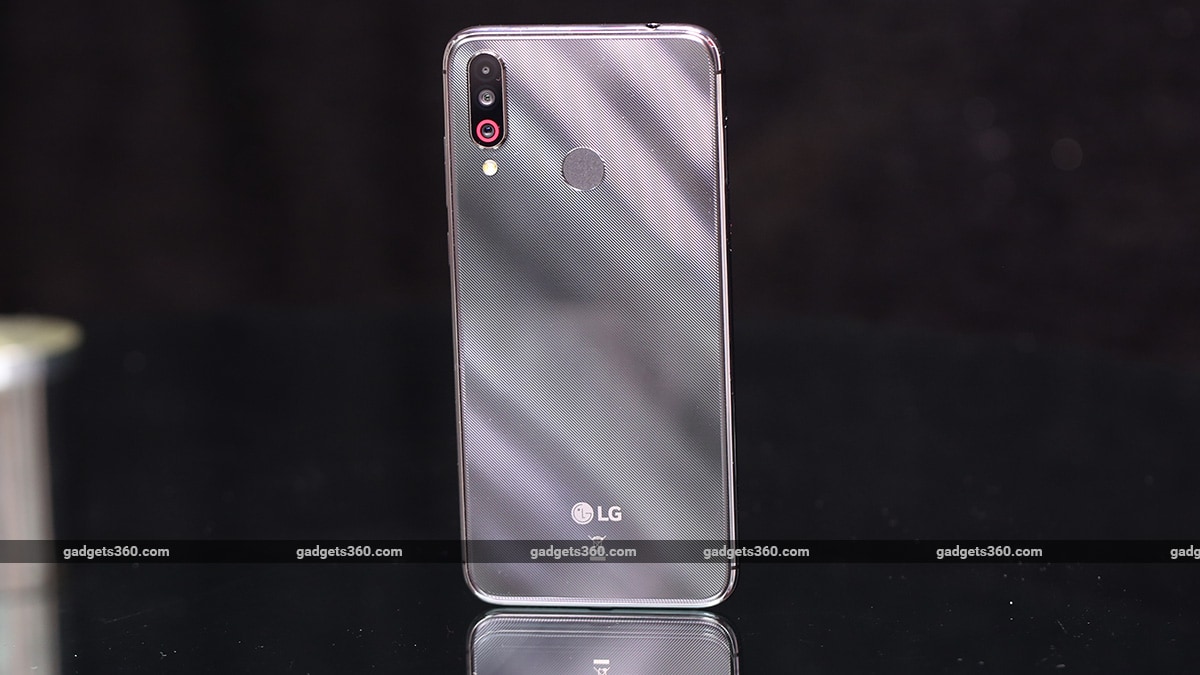 The LG W30 has a laminated back, which thankfully doesn't scuff very easily

The LG W30 has a hybrid dual-SIM tray on the left, which supports two 4G Nano-SIMs with VoLTE and ViLTE. The downside is that you'll have to sacrifice the second SIM for a microSD card, which you'll probably need in the long run since the LG W30 only has 32GB of internal storage.

The headphone socket is placed on the top, while the speaker and Micro-USB port are at the bottom. We've seen phones at this price with a USB Type-C port, such as the Nokia 5.1 Plus (Review) and more recently, the Redmi Note 7 (Review), so it's a bit disappointing that LG hasn't used the newer standard for the W30.

The phone has a notched display with thick borders on all sides, especially the bottom chin. LG has squeezed in a notification LED near the notch, which many will appreciate. Through software, you can change the look of the notch from the default style to a dewdrop notch, or mask it altogether. Most apps automatically mask that area, so it doesn't hamper visibility. However, YouTube videos in fullscreen mode fill the area around it.

At the back, you have the three cameras aligned to the left and a large fingerprint sensor in the middle. The latter works well to authenticate you, and you even get a little haptic feedback when you touch it, so you know you've placed your finger correctly. LG offers face recognition too, but it's slow and doesn't work at all in the dark.

The LG W30 has a good build quality, despite the plastic construction

The LG W30 is powered by the MediaTek Helio P22 SoC, which is an entry-level chip found in phones such as the Realme C2 (Review). We would have preferred something more powerful at this price, such as the Helio P60 or even the Helio P70, in order to make the LG W30 more competitive.

This phone is only available in one configuration, which is 3GB of RAM with 32GB of storage. There's dual-band Wi-Fi 802.11ac, Bluetooth 4.2, USB-OTG, FM radio, and the usual suite of sensors.

The LG W3 is only Widevine L3 certified, which means video-on-demand apps such as Netflix won't be able to stream content in HD resolution or higher.

For software, the LG W30 runs near-stock Android 9 Pie, and our unit had the May 2019 security patch. The default Android 9 navigation style uses a swipe-able Home button to switch between apps, just like on Google Pixel phones, but you can switch to the more common three-button scheme. Digital Wellbeing is also present. 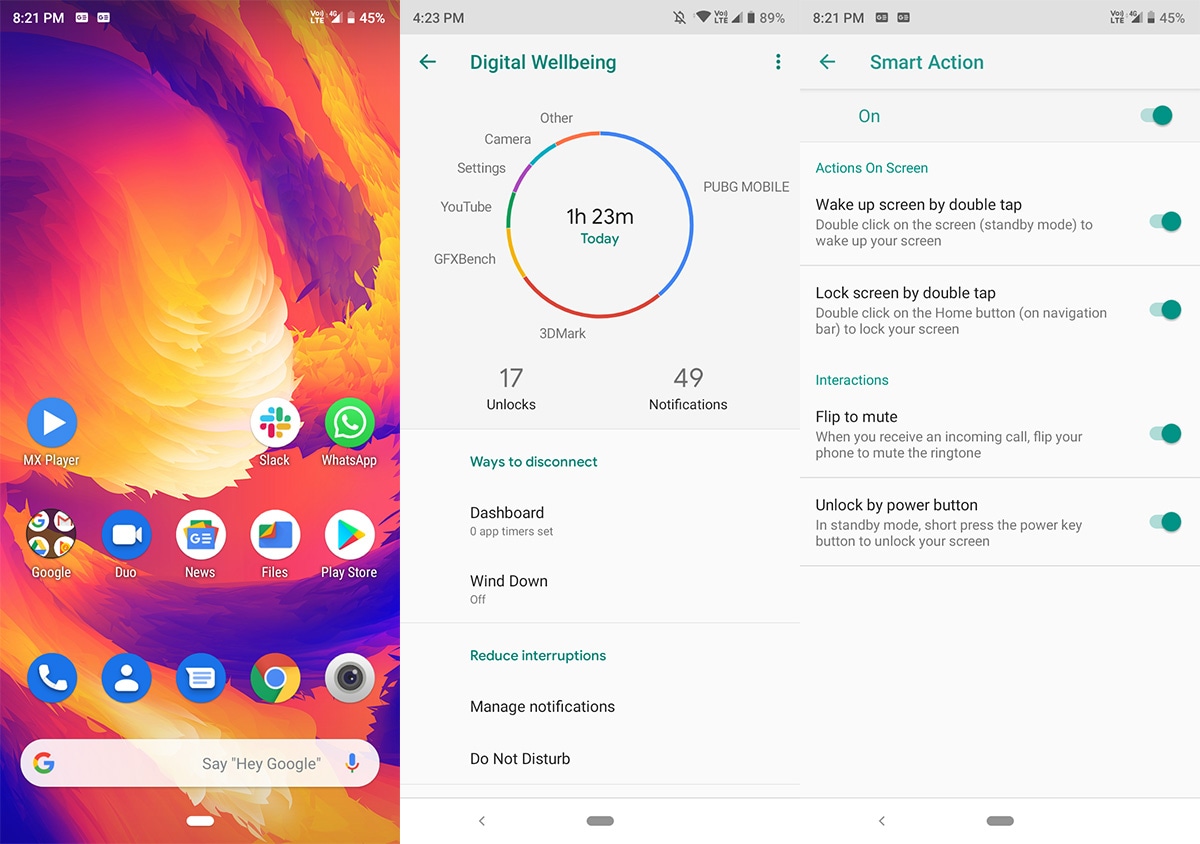 The near-stock Android experience on the LG W30 looks good

LG has added a few touches of its own such as a ‘Panic button,' to call an emergency helpline (112) if you press the power button of the LG W30 thrice in quick succession. You can also take scrolling screenshots if needed, and the Settings app has a bunch of gestures and shortcuts which can be activated.

There's MediaTek's DuraSpeed option too, which lets you force apps to stay active in the background. The LG W30 doesn't have any option to force apps to scale to the full screen and fill the notch area, which is something we would have liked.

The LG W30 does a decent job with the Android UI and regular usage. Swiping through menus is quick, and apps don't take forever to load, thanks to the decent amount of RAM. However, there's no getting around the fact that this is a pretty weak SoC, and you're reminded of this with slight stutter and lag, which creeps in intermittently when you try switching between landscape and portrait orientation in some apps or in some UI animations.

More demanding apps, such as heavy games, don't offer a very good experience. This is reflected in the benchmark scores we got. In AnTuTu, we got a score of just 75,140 points, and the single and multithreaded scores in Geekbench were 760 and 3,652 respectively.

For instance, PUBG Mobile runs at the lowest graphics preset by default, and even then, gameplay felt laggy with plenty of stutter when the action got heavy. On the other hand, simple titles such as Alto's Odyssey ran fine.

The phone doesn't run too hot, except at the top, which tends to get a little warm when gaming. The single speaker at the bottom gets quite loud but the quality is below average. Highs are shrill and the overall sound is tinny.

The LG W30 prides itself on having three rear cameras. There's a main 12-megapixel camera with an aperture of f/2.0, a 13-megapixel wide-angle fixed-focus camera with a f/2.2 aperture, and a 2-megapixel depth sensor. The main camera uses the Sony IMX486 sensor, which is also seen in phones such as the ZenFone Max Pro M2 (Review) and the Redmi Note 5 Pro (Review).

Sadly, the autofocus system is sluggish. The sensor needs to hunt for a second every time it needs to lock focus. In daylight, image quality is decent but objects at a distance in landscape shots lack good detail. Close-ups fare slightly better. There's also noticeable shutter lag when shooting, even under good light, which means you and your subject have to stay still for a second or two after hitting the shutter button in order to avoid blur. 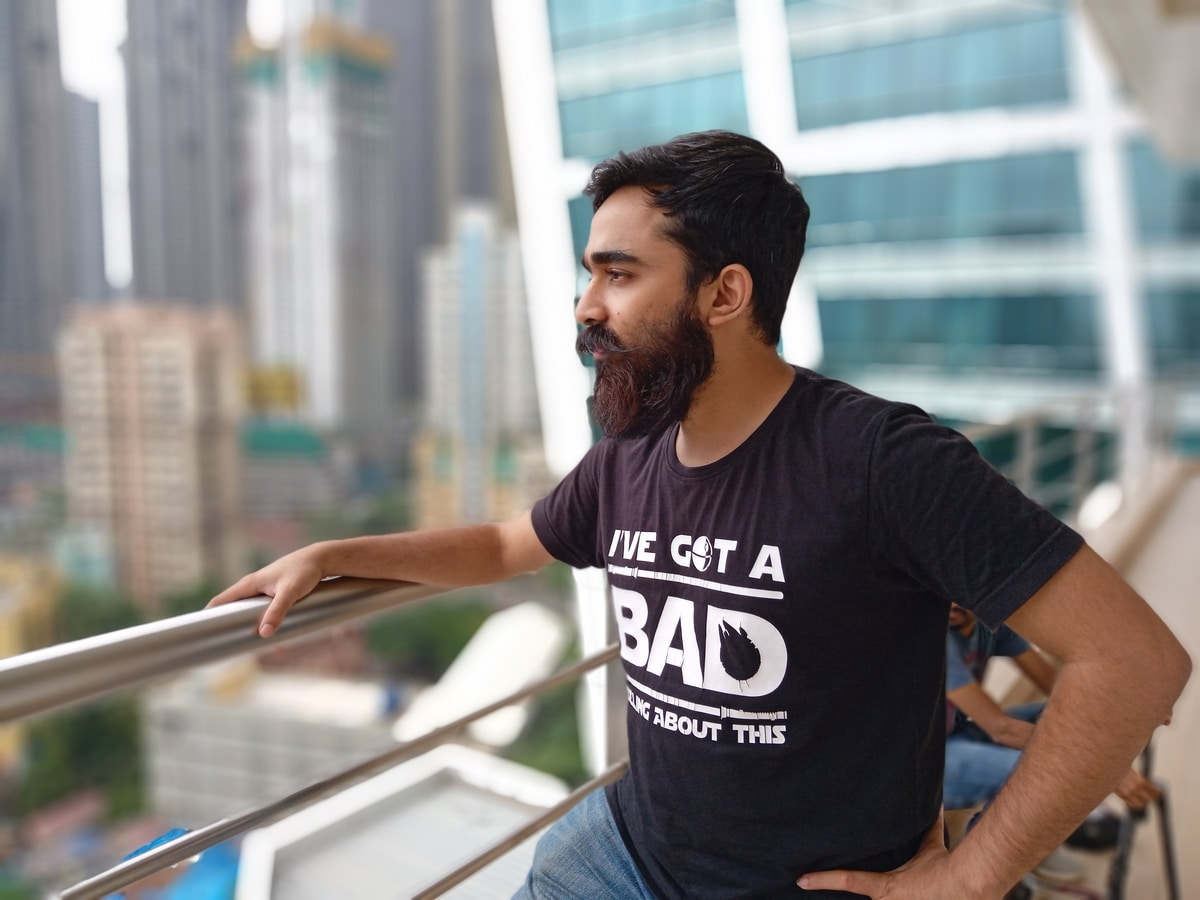 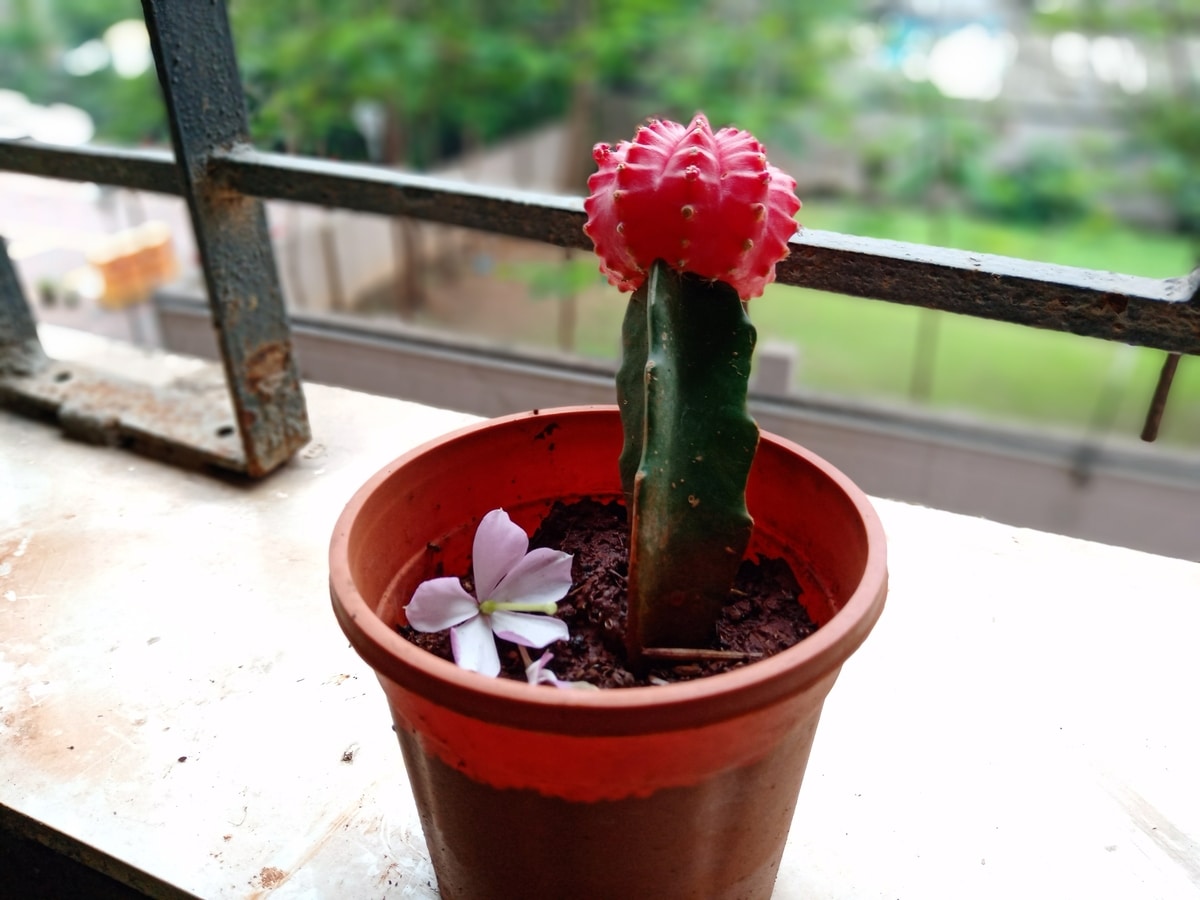 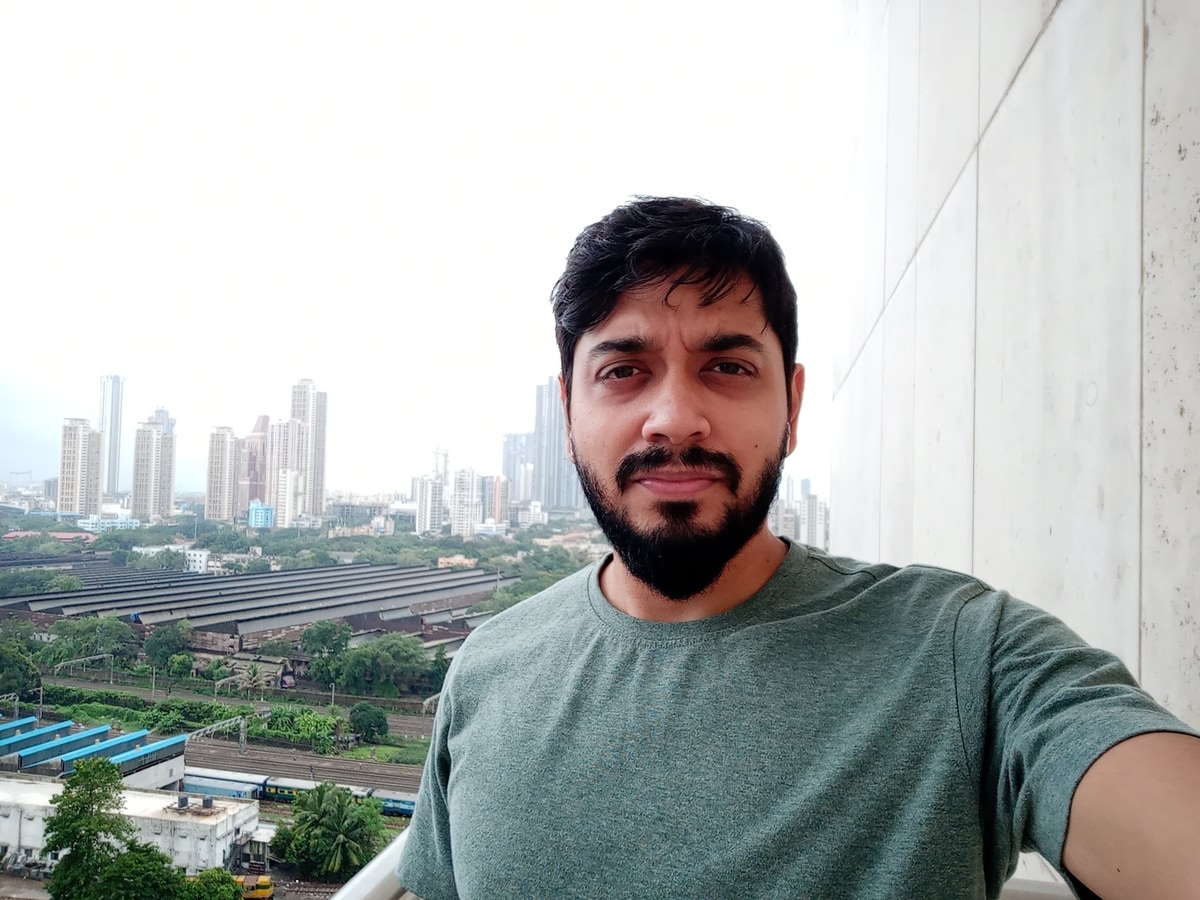 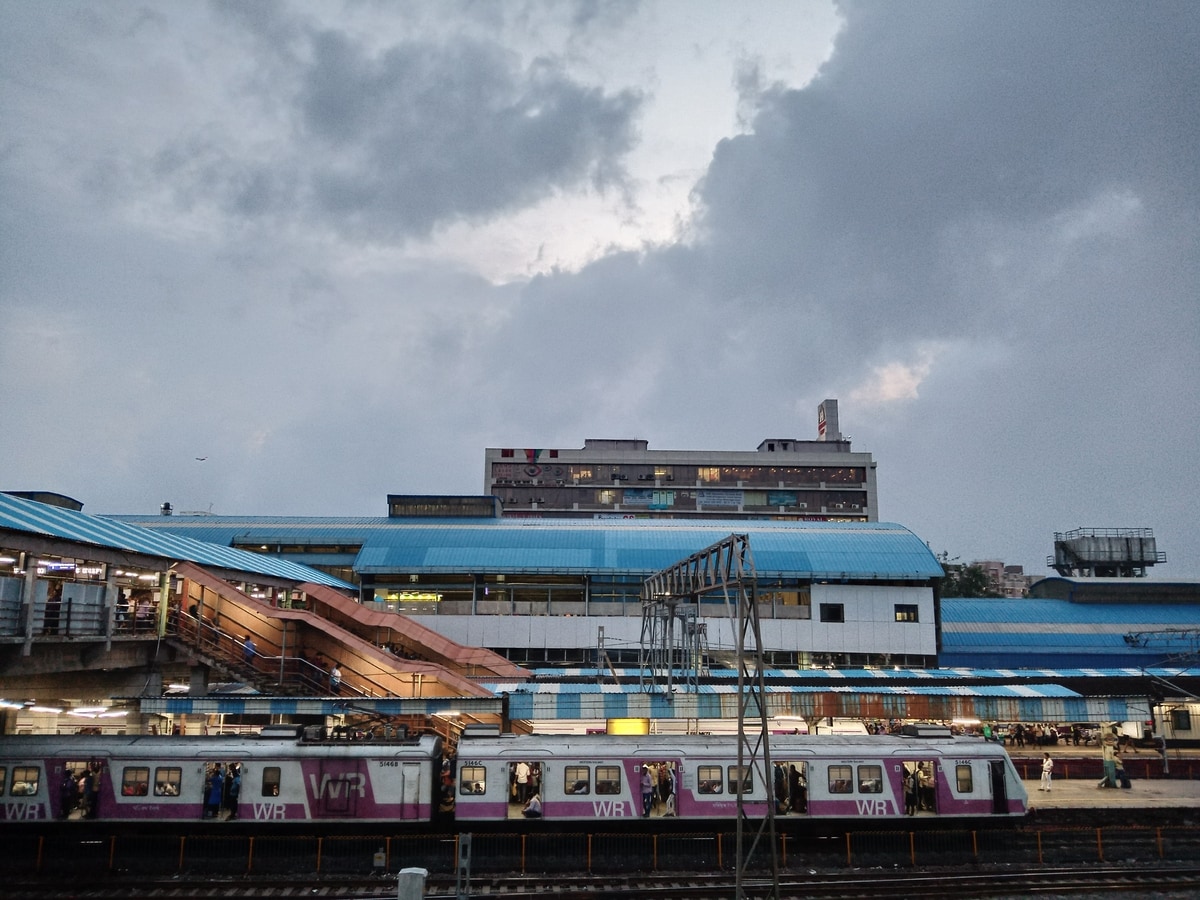 Switching between the wide-angle and main sensor of the LG W30 is easy thanks to the dedicated button in the viewfinder. Wide-angle shots have less detail and visible noise. There's also noticeable barrel distortion on objects towards the sides of the frame. Other shooting modes include panorama, bokeh, beauty, time-lapse, slow-motion, and night.

With the LG W30's bokeh mode, you can adjust the level of background blur before you shoot but this can't be changed later. Edge detection feels a little crude and there are times when this phone failed to blur everything correctly when shooting people, but shots of objects fared a bit better. Another issue we noticed is that the frame rate in the viewfinder drops in this mode, which makes it choppy and a little challenging to frame a shot correctly.

At night, the narrow apertures of both sensors make it impossible to capture good detail with the LG W30, and photos are generally quite dark. The phone's night mode does help a bit and images looked brighter, but there was visible noise and details were still weak. Night mode also works with the wide-angle camera. 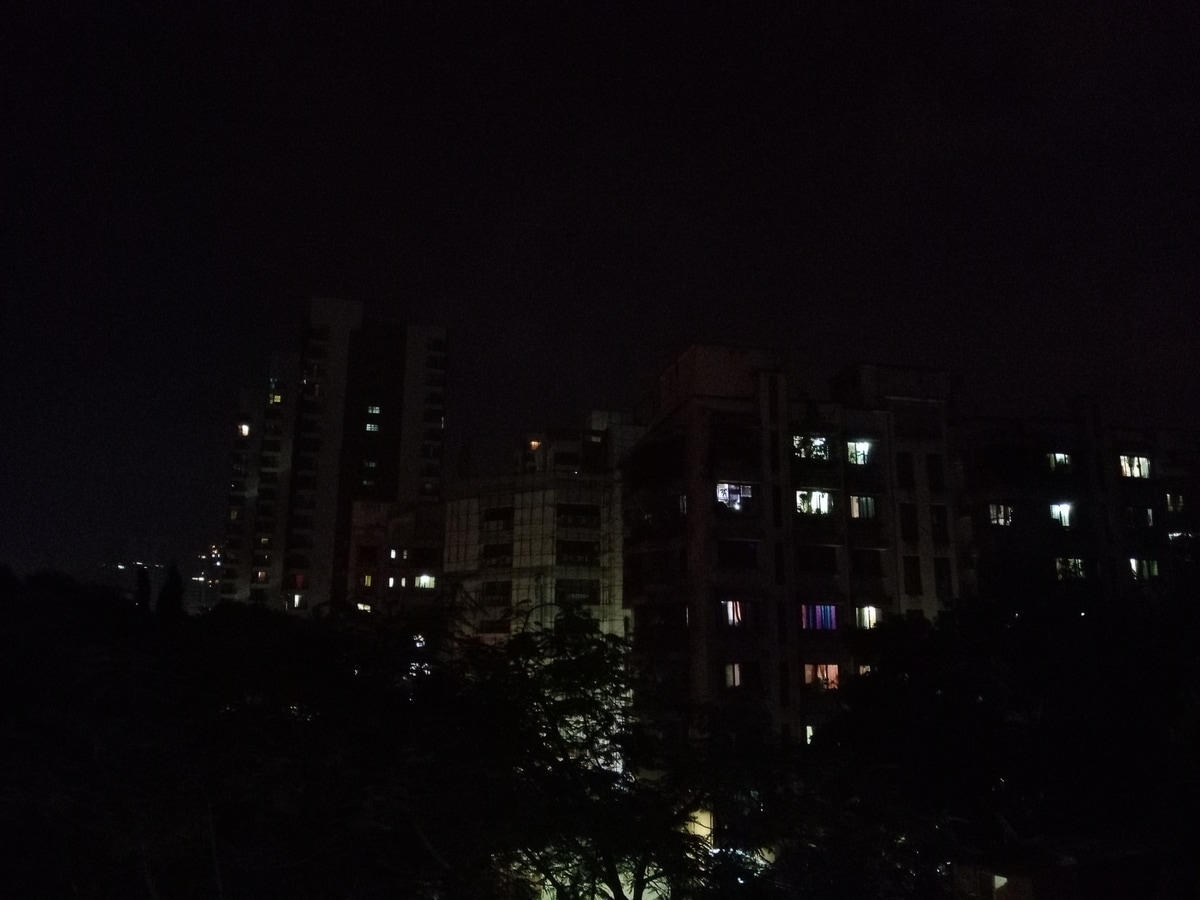 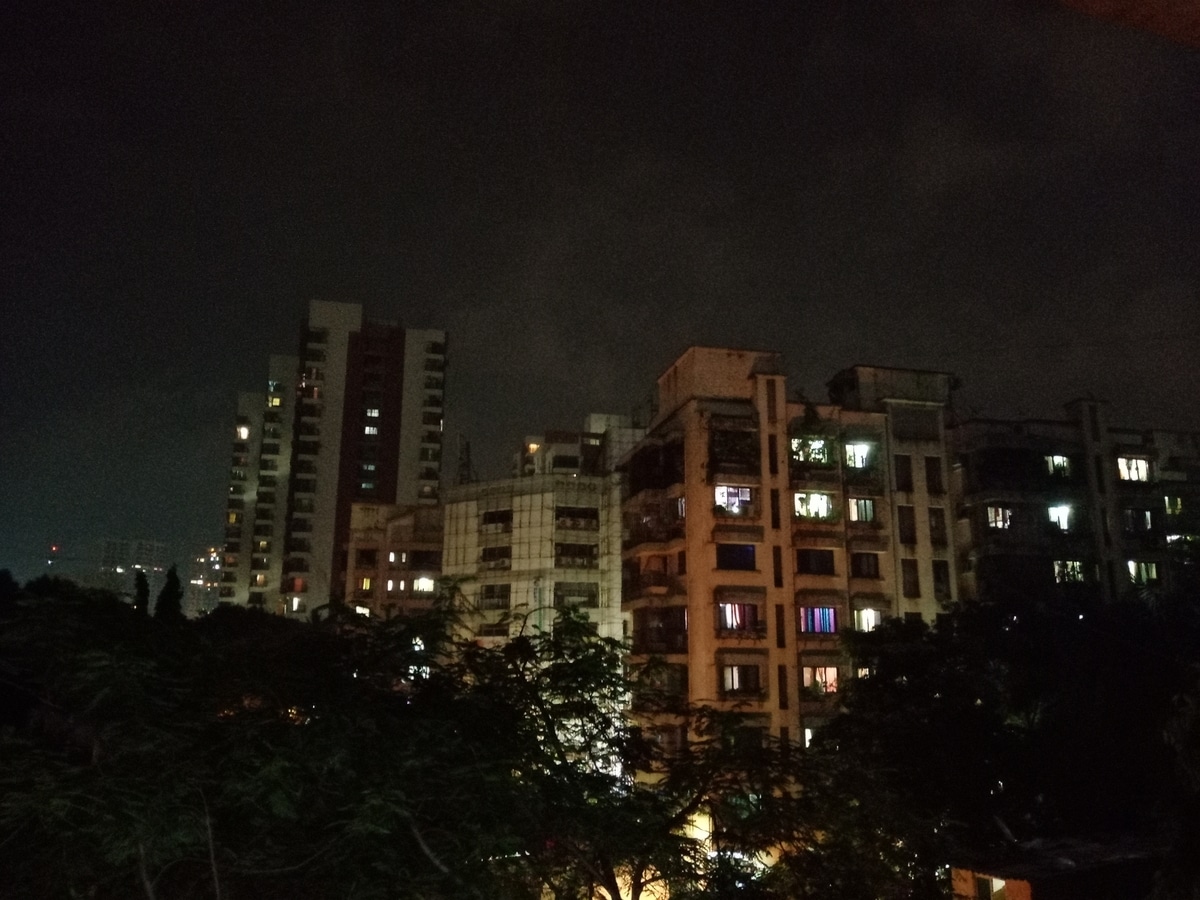 Shot on the LG W30 with the Night Mode (bottom) and without (top). Tap to see full-sized images

The 16-megapixel front camera captures passable selfies but has trouble correctly exposing them, leaving blown-out highlights, even with HDR enabled. In low light, image quality is average at best. There's a beauty mode for the selfie camera too, but this tends to aggressively smoothen skin textures.

The LG W30 can shoot video at up to 1080p, however, there's no electronic stabilisation for either of the sensors. Image quality isn't great, and bright areas in the footage are often overexposed. Continuous autofocus doesn't work well all the time, which can be an issue.

Heavy use of the cameras and even gaming don't take a huge toll on battery life, which is one of the strong suits of the LG W30. The low-powered SoC, coupled with the HD display resolution and 4000mAh battery capacity result in very good battery life. We managed to get 23 hours and 21 minutes of runtime in our HD video battery loop test, which is excellent. With normal usage, the LG W30 easily lasted for about a day and a half (if not more) on a single charge. The phone ships with a 10W adapter, which takes a little over two hours to fully charge the battery.

Verdict
LG's W-series is the company's latest attempt to capture a piece of the budget market in India, but it doesn't seem as though the LG W30 is an aggressive enough device to shake Xiaomi and Realme from their top spots. This phone's biggest shortcomings are its weak cameras and processor, which hold it back. You can find better options such as the Redmi Note 7S (Review), Realme U1 (Review), and the Asus ZenFone Max Pro M2 (Review) around the Rs. 10,000 segment — all of which offer higher resolution displays, faster processors, and better cameras.

The LG W30 does have some redeeming qualities though. It's built well and looks good, has a vivid display (albeit with a low resolution), and offers superb battery life. However, since it's only available through flash sales right now, it's not going to be easy to buy. We think you'd be better served with phones such as the Redmi Note 7S (Review) or even the Realme U1 (Review), which are much easier to buy and also happen to be better all-round options.