In the recent past, there have been plenty of affordable Android smartphones launched that are under the price bracket of Rs. 20,000 and through this review we try to find out if LG Optimus L7 II dual will be make its mark or not.

Hardware/ Design
In terms of looks LG Optimus L7 II dual has a very run of the mill looks. It has a rectangular build with curved borders. The entire body is made of plastic but at the same time it does not look cheap. 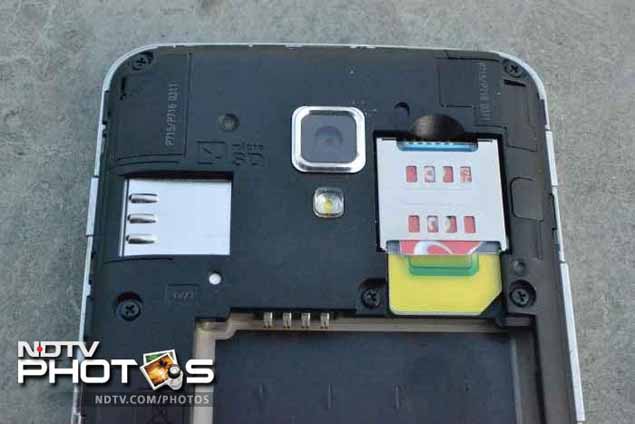 The back panel of LG Optimus L7 II dual has a textured finish, which was missing in its predecessor, the LG Optimus L7 dual. The front is taken up by the 4.3-inch IPS (WVGA) touchscreen. Just below the screen are the four capacitive buttons for Back, Home, Menu and SIM-switch button. With the help of SIM-switch button you can easily swap the SIM before making a call or sending an SMS. It comes in very handy in terms of managing SIMs as one does not have to go to settings and change SIM functions in order to make a switch.

However, these capacitive buttons on the smartphone are not backlit, which makes them difficult to use in the dark.

Display
The LG Optimus L7 II dual comes with 4.3-inch IPS 480x800 pixel (WVGA) display, which has a pixel density of around 216ppi. In the recent past, we have seen some companies launch HD smartphones at the same price point. In any case, most smartphones in the range of Rs. 15,000 price points come with at least a qHD display and so are disappointed with the display resolution of LG Optimus L7 II dual.

We were easily able to read the text on this smartphone, however watching videos or pictures is not a pleasant experience. You can even see slight pixelatiom on the display while watching videos and pictures.

The viewing angles of this smartphone are average but the colour reproduction is not very good. The under sun light visibility is passable. However, the screen is a finger print magnet and needs to be cleaned frequently.

The touch sensitivity of the screen is good, but in our experience it is a tad bit oversensitive and because of this we would end up terminating our calls accidently.

Software/ User Interface
The LG Optimus L7 II dual runs Android 4.1.2 (Jelly Bean) and the smartphone has been heavily skinned. The Korean smartphone has added its own Optimus UI 3.0 layer on top. One of the major advantages of this skin is that the customisations and UI extras that LG is offering with its flagship phones such as the Optimus G, are also available on this smartphone in the same or a lighter avatar.

LG also allows you to customise the Lock screen giving the ability to select four app shortcuts and a clock or calendar. Swiping anywhere else on the lock screen will take you to the last screen that you were on, before the smartphone went on standby. You can choose the animation effect that you would want to use on your smartphone when you swipe from one home screen to another or when you unlock the phone. 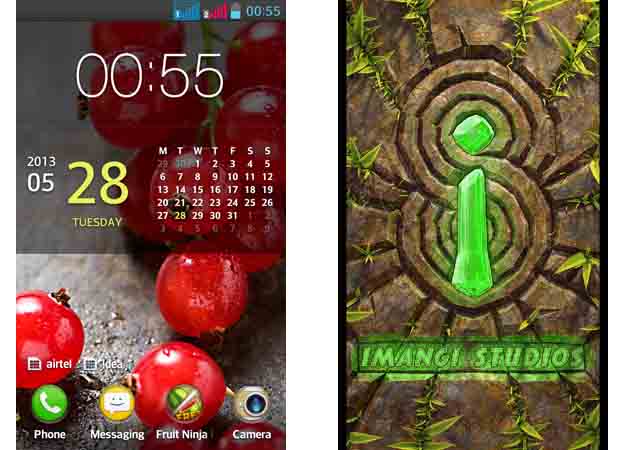 LG gives you the option of choosing from four different themes - Optimus, Biz, Cozywall and Marshmallow. All these four themes offer a different icon set, home screen wallpaper and app drawer background. These themes are a quite bright and fun. Amongst these themes, the Marshmallow theme seems designed for young girls and looks straight out of fairy tale books.

LG Optimus L7 II dual comes with five customisable home screens that you can fill with apps and widgets. The Korean smartphone maker has also skinned the notification tray and has included toggles for various settings including for sound, data, NFC, Bluetooth, Wi-Fi, and Hotspot among others. It also features a shortcut for system settings, and a control for changing screen brightness.

LG also added its site of "Q apps" on this smartphones that includes QMemo, QTranslator and QSlide. QMemo app stands for Quick Menu and helps users to scribble notes on a blank page or on top of a screen shot. QTranslator app is a real-time translator. With this app you can scans text, which are in a different language using your camera.

As we already mentioned that the LG has added a swap key to help manage both the SIM effectively. Even on the software side, LG has added a few touches that help the users conveniently manage their two SIMs. For example, there are two different colour schemes throughout the menus indicating which SIM card is in use. The primary SIM card is represented in blue colour and the other SIM is showed in magenta. This helps in clearly demarking which SIM is in use and seems quite thoughtful add on from LG's side.

Camera
The LG Optimus L7 II dual comes with an 8-megapixel auto-focus camera with a single LED flash. There is no dedicated camera key on the smartphone, but we did not miss it much as this smartphone, just like the Optimus G, can also take pictures with voice commands like 'cheese', 'kimchi', 'LG', 'Smile' and 'Whisky'

Pictures clicked through this camera are average in the broad sunlight but the edges appear to be slightly burned out. The colour reproduction of the pictures is satisfactory.

This smartphone also comes with a burst shot feature that enables you to take six quick continuous shots. However, moving images clicked are blurry and also there is a slight camera lag while taking pictures in the burst mode.

The experience of using video recording through the rear camera is average. You can capture videos of 480p at 30 frames per second.

Performance
LG Optimus L7 II dual packs in 1GHz dual-core processor along with 768MB of RAM. Though the smartphone is able to perform day-to-day task without much hiccups, it is not ideal for multitasking for playing heavy games.

The experience of playing popular games such as Fruit Ninja, Temple Run 2 and Angry Birds is breezy. LG Optimus L3 II dual did not support the game Subway Surfer but the same is supported by this smartphone.

The smartphone comes with 4GB of internal storage, which can be expanded via microSD cards of up to 32GB. Furthermore, only 1.78GB memory is user accessible. 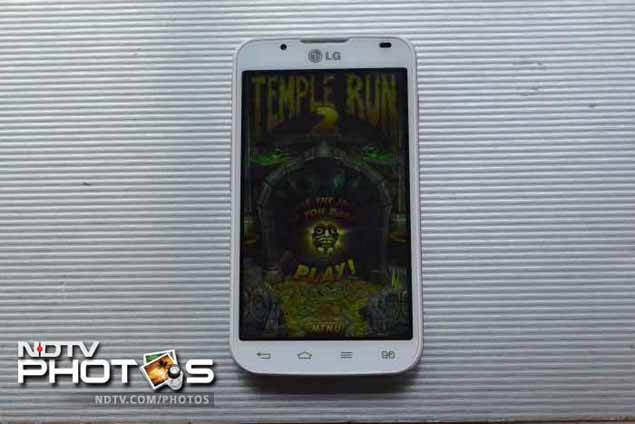 The LG Optimus L7 II dual comes with the native Android browser as well as Chrome and we found that it renders webpages well. The phone doesn't come with Adobe Flash pre-installed.

The speaker on the phone delivers good quality sound at high volume levels both through the speaker as well as the earphones. The call quality of LG Optimus L5 II dual is good too. The phone is a dual-SIM GSM phone with dual-standby.

The LG Optimus L7 II dual comes with a 2,460mAh battery and based on our experience, it will easily last a day and a half with medium usage.

Verdict
LG is trying hard to make its mark in the Indian smartphone market. However, we feel that the company has not really been able to nail the segment with LG Optimus L7 II dual, with the display being especially underwhelming.

We recommend having a look at the Nokia Lumia 720 (Review| Pictures) if you do not mind a Windows Phone 8 offering. Priced at Rs. 18,999, the Lumia 720 is an attractive proposition. The other option that you might want to look at is the Samsung Galaxy Grand Duos (Review| Pictures). This is slightly expensive than the LG Optimus L7 II dual but has great media capabilities. However, the display of the Samsung Galaxy Grand is not great either. Apart from these one can also look at the Micromax Canvas HD (Review| Pictures), which is a good value for money proposition.